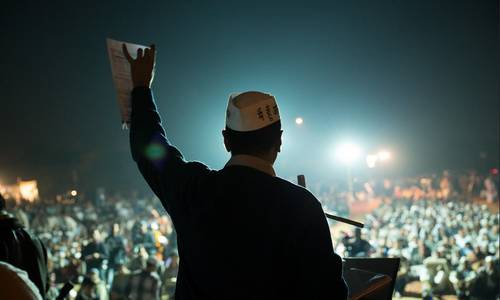 Two filmmakers from Mumbai are facing difficulties in screening their film An Insignificant Man in India despite the many international screenings that took place over the past months. The Indian censor board requires the filmmakers to get a no-objection-certificate from Prime Minister Narendra Modi. Directors Khusboo Ranka and Vinay Shukla have launched a social media campaign to raise awareness for the unacceptable censorship policies in India.

The Hindi-English documentary An Insignificant Man - which premiered at Toronto International Film Festival last year - chronicles the anti-corruption protests lead by Anna Hazare which resulted in the rise of the Aam Aadmi Party, the NDA sweeping to power at the Centre, and Arvind Kejriwal becoming the Delhi Chief Minister with a thumping majority.

According to the Mumbai Mirror, the Censor Board asked Ranka and Shukla to delete all references to the Bharatiya Janata Party and the Congress from their documentary, and also submit No-Objection-Certificates (NoC) from Modi, former Delhi Chief Minister Sheila Dixit, and Kejriwal, among others. When the filmmakers approached Censor Board chairperson Pahlaj Nihalani, he "threw them out of his office" saying he did not owe them an explanation. Ultimately, these requirements make it nearly impossible for the film to be shown in India. To draw a comparison, this would be like asking Michael Moore to furnish an NoC from George W. Bush before clearing Fahrenheit 9/11.

On the film's official Facebook page, the filmmakers explain: "Over the last few months, a lot of you have asked us about the film’s release in India. [...] the last few months have been very difficult. The CBFC has treated us in an arbitrary manner, all the while leaking reports to the media about our film. At the end, they have given us a U/A certificate subject to us getting an NOC from the Prime Minister of India, the Chief Minister of Delhi and the ex-Chief Minister of Delhi. This is an impossible demand. There is no way we, or any other filmmaker in the future, will be able to fulfil this. But more importantly, this is also an unethical demand. Especially, if we expect artists to fearlessly tell meaningful stories. We cannot progress as a democracy if every statement on politics is regarded as a threat."

You can support the awareness campaign against censorship by sharing the official statements and details below among your contacts as widely as possible:
https://www.facebook.com/aimthemovie/posts/1926086244295640
https://twitter.com/aimthemovie/status/867991282110484480