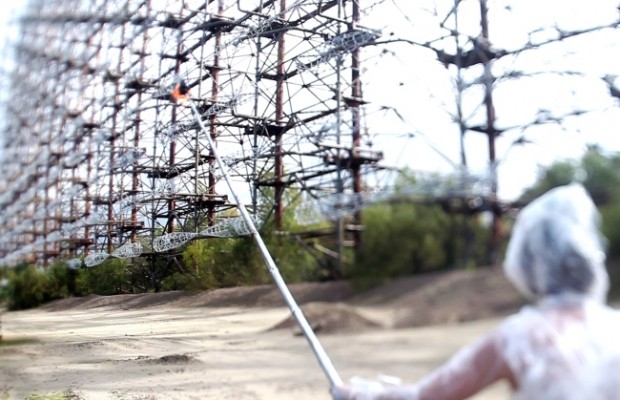 On the heels of last night's program at the IDA Screening Series, we're featuring the producer, director and editor of The Russian Woodpecker talking about the challenge of editing five stories into one documentary:

For months, the attempt to weave these stories together looked hopeless, especially since I wanted the film to have the pacing of a thriller and come in around 80 minutes. I seriously considered cutting entire storylines or releasing separate films, and until the last minute was sure that this would be required. But any time I peeled off one story, it became clear that the other four were relying on it. Without the history of Ukraine, Fedor’s dream quest and the revolution made no sense; without the revolution, Fedor’s investigation and predictions of war had no satisfying conclusion; and so on with each permutation. One day not too long before our deadline, I was looking at our chart of various storylines, color-coded and graphed by emotional intensity. It hit me that the most powerful moment in the film was when Fedor overcomes the ghosts of the Soviet past that had been haunting him and his family for generations. I decided then that Fedor’s psychological journey would be the sole narrative train of the film.

William Dickersen of Indiewire asks how middle class filmmakers can make a living in Hollywood:

The sheer fact of it is: if you're a member of the middle class of filmmaking, it's nearly impossible to make a living. At least, currently. So, where's the voice, or voices, of our collective struggle, fighting for our rights to make a living? Where's our industry's Bernie Sanders? There is no one because the one percent of Hollywood is making far too much money producing a limited amount of products that sell to the broadest spectrum of people. [...] America is a country that prides itself on industry and innovation in industry. While Hollywood remains one of the country's biggest industries, it has ceased to be a leader in innovation. In fact, the current business model is one that stymies innovation, and innovation in this business is originality; it's storytelling, not special effects or computer-generated spectacles. The bells and whistles that mask as innovation are only as innovative as the stories themselves. Everything must serve the story; it's that plain, it's that simple. The problem is, there's a dollar and a cent to be made by telling the same story, in the same way, again and again—all Hollywood has to do is switch up the actors and wrap it in a nice, new shiny package.

Kent Jones interviewed Martin Scorsese at the New York Film Festival, where he recalled the early challenges in persuading studios of the need to preserve their films:

At that point we realized the future of what had been created up until 1950 or 1960, that if nobody was made aware of it, it really came down to people going into the vaults and going through the cans. And that’s hard to do, because the people who are employed that way, they’re there to make sure that if they’re sent down there, they can find something—and that’s about it. But when they open these cans and look at them, for example, there was no system. Also around that time, in 1970, MGM went under and the films went somewhere else. Paramount had sold all of their pre-1948 films to Universal before video came out, thinking that there were no more legs in them, that they couldn’t make any money from them. There was an idea that film libraries were something that you had to get rid of. There were stories of negatives being burnt and thrown away. [...] I began to realize, if that’s what you think about our culture, then there’s nothing in the culture. It’s a culture that you use up and throw away. You don’t care about it. If everybody’s walking around thinking that film changed their life, that a book changed their life, thinking that it’s going to be there all the time, to keep a continuity with the younger generations of this thing… If you think art is important at all, whether it’s commercial art or not, it seems to me it’s art. Maybe some are better than others. If it’s good, bad, or indifferent. It’s still art and we all know it’s very, very hard to even make a bad film.

There's a scene in which Ed [Pincus] talks to his colleague and mentor, Ricky Leacock, at what seems like a weekend party. Children and spouses are all around, but the two men huddle next to the window to talk shop while someone else holds the camera (a student, a lover, both?): ED: You made the intellectual decision not to be private like other people. RICKY: I was enormously private. ED: There’s a big cost to privacy that I wasn’t interested in. But then on the other hand there seems to be a cost to being public. Lots of time I feel that you strain to be public and you don’t really want to. RICKY: Because it could be embarrassing—to be public. Suppose what emerges from you is not acceptable to the public. ED: Funny enough it sort of drives me in that direction. You do want to make these. At the same time you don’t want to make them, you do want to make them. It’s an interesting discussion, and both men have poured themselves into these matters. But they’re also both clearly proud of the discussion, and excited that it’s self-reflexively happening on camera. Then right as Leacock is illustrating his point by surmising how humiliating it would be if the camera revealed that he was queer, they’re interrupted by loved ones. Real life invades their “real talk.” A not candid conversation about living candidly only becomes candid when it’s counteracted—underscored by Leacock glancing back toward the camera sheepishly, his sheepishness being the scene’s one true thing.

From the archives, March / April 2006: Portrait of the Artist as a Manic Depressive: Daniel Johnston and His Demons

One exchange with Johnston that Feuerzeig captures comes while the two watch Super-8 footage Johnston shot in art school of the girl of his dreams, Laurie. As Johnston's fans are aware, his unrequited love for Laurie is the subject of several of his songs, and understanding the tremendous impact she has on the man is critical in grasping his art. Audiences may wonder, then, why Laurie appears on screen only in Johnston's recordings. A title card does update her status at the film's conclusion. "Believe me, we vacillated," says Feuerzeig. "Do we film Laurie? Do we not film Laurie? When we found Daniel with the Super-8 of her and how he watches it over and over, we realized that he's preserved her in his head, frozen in time in that film. So we didn't want to take that away from him or her. We just wanted to honor that--and therefore we didn't interview her."