By KRISTAL SOTOMAYOR and HANSEN BURSIC 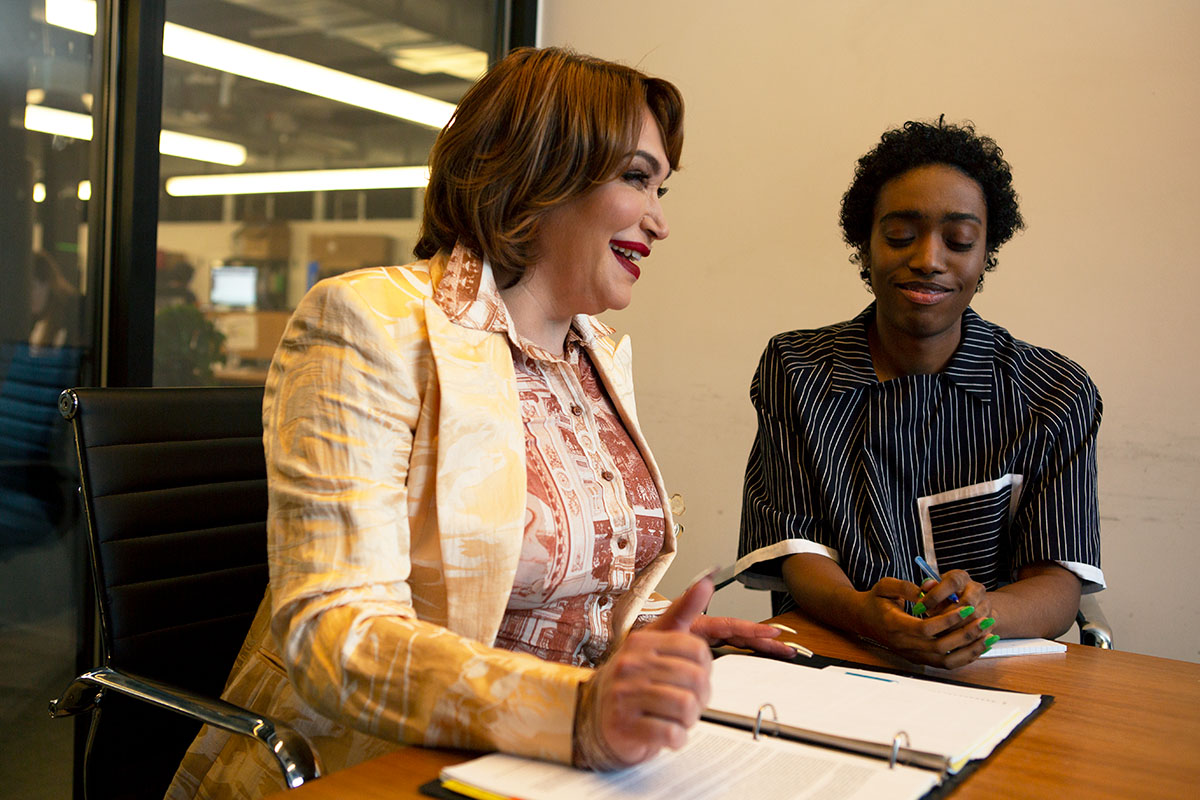 Strong, meaningful allyship is one of the most powerful tools we have to change our industry for the better. Over the last few months, an important discussion has been brought back into the mainstream about what industry leaders and filmmakers can do to support Trans folks. Additionally, several of the Disclosure Trans Industry Toolkits have been made available at discounted rates. IDA has partnered on the toolkits to provide feedback.

Following last week's Sundance Collab, GLAAD, and IDA panel on the tool kits and being that it's Trans Awareness Week, we decided to share a few ways documentary filmmakers can be better Trans allies in their work. Whether you are a long time ally or starting your allyship journey, take a second to reflect on what you can do to make the industry a better place for your Trans, Non-binary and Gender Expansive siblings.

Avoid taking up space that would or could go to Trans filmmakers.

“Get outta the way of Trans people.”

Filmmaking is a collaborative process taking a whole crew to get the story told. In this creative process, there are often moments where leadership, such as directors or producers, need to take a larger role in decision making. When working on a film about Trans experiences, it’s important to evaluate the power and positionality of the folks working behind the camera.

The authorship question that has become increasingly used in the documentary industry is “Are you the right person to tell this story?” In answering this question, it’s important to be honest about the perspective and privilege that may be brought into the artistic process.

In order to tell the most accurate story, it may be necessary to relinquish power or make space for alternative perspectives or experiences. This exchange can be as simple as providing adequate compensation or providing roles within the filmmaking team to Trans folks. The connection and collaboration can be fruitful to storytelling and even significantly increase the impact of the film.

Make intersectionality a core part of your work.

When talking about Trans experiences, it’s also important to acknowledge intersectionality. The Williams Institute at UCLA reports that “adults who identify as Transgender are more racially and ethnically diverse than the U.S. population overall.” In fact, Black, Latinx, and adults of other races or ethnicities are more likely to identify as Trans than white adults. Keeping in mind the many aspects of a person’s identity allows you as a filmmaker to create a more rich portrayal.

Disclosure centers the narrative of Laverne Cox, a Black Transwoman, that speaks on her personal experiences. This offers a new texture to the storytelling within the film. Cox and other Black Trans artists speak on culturally specific experiences that impact their understanding of representation. One such story includes the erasure of Phillip DeVine, a young Black dissabled man, from the film Boys Don't Cry, which is based on the real-life story of Brandon Teena. That exclusion within the film, for some Black Transmen within Disclosure was invalidating given their intersectional identity. That moment in the film highlights the significance of intersectionality within storytelling.

Be intentional when building your team and work environments.

“Every person on set becomes part of the DNA of the film.”

While it might seem obvious, if you are telling a Trans narrative as an ally, you need to be intentional about hiring Trans people on your set, especially in key above the line roles— and paying them well. There are a few local lists for LGBTQIA+ crew members, depending on where you are located, but this site may be a good starting point. Don’t be afraid to list “Trans, Non-Binary and Gender Expansive people are highly encoraged to apply” on any hiring communications. Avoid using gendered language like “he/she” or “ladies and gentlemen'' in any communications. If you can’t find a Trans person to fill a role on set, create a paid mentorship position for a Trans person so that you can help fill that gap.

While offering paid mentorship might seem like something excessive or extra, Disclosure was a prime example of the value of such a program for the whole project. Director Sam Feder listed an example of a Trans mentee giving advice to a sound person on how to mic someone with a chest binder. These are the kind of moments you can create on set, through mentorship, that make all the difference.

While hiring and mentorship are important, it means nothing if the people you hire end up on sets that are unwelcoming and unsafe. On any set you are in charge of, carefully vet your crew and make sure to reiterate that no Transphobia (or any kind of discrimination or harrasment) will be tolerated on your set. Make sure to ask all crew members for their pronouns and put those pronouns on call sheets, if you are using them. It also wouldn’t hurt to have your leadership team go through one of the many Trans-led workplace workshops and competency trainings that exist in pretty much every major city and virtually.

Pay mind to the history of misrepresentation.

When you learn to paint, often you learn from recreating the “classics.” Filmmaking is similar in that understanding the rich history of cinema allows you to explore artistic possibilities. When telling a story about Trans folks, it’s important to have an understanding of the history of misrepresentation.

Learning about the use of gendered bodies as plot devices in Alfred Hitchcock movies or of cruel depictions of Trans folks as a comedy punchline allows a filmmaker to create more accurate portrayals of Trans communities. In a documentary, you might feel the urge to fall back on the fact that many of the things in your documentary really did happen. In the editing room, you choose the moments that audiences see. Keeping in mind tropes and stereotypes of Trans depictions will help you not to contribute to a misleading representation through your work.

Kristal Sotomayor is a non-binary Latinx freelance journalist, documentary filmmaker, and festival programmer based in Philadelphia. They serve as the Awards Competition Manager for the IDA Doc Awards and as Programming Director for the Philadelphia Latino Film Festival. Kristal has written for ITVS, WHYY, AL DÍA and Autostraddle. They are a 2020 Documentary Magazine Editorial Fellow.

Hansen Bursic is the Digital Communications Coordinator at IDA. He is also a filmmaker and freelance journalist with bylines in CinéSPEAK and QBurgh.

END_OF_DOCUMENT_TOKEN_TO_BE_REPLACED

'Before Stonewall' Tracks the Pre-Movement Era