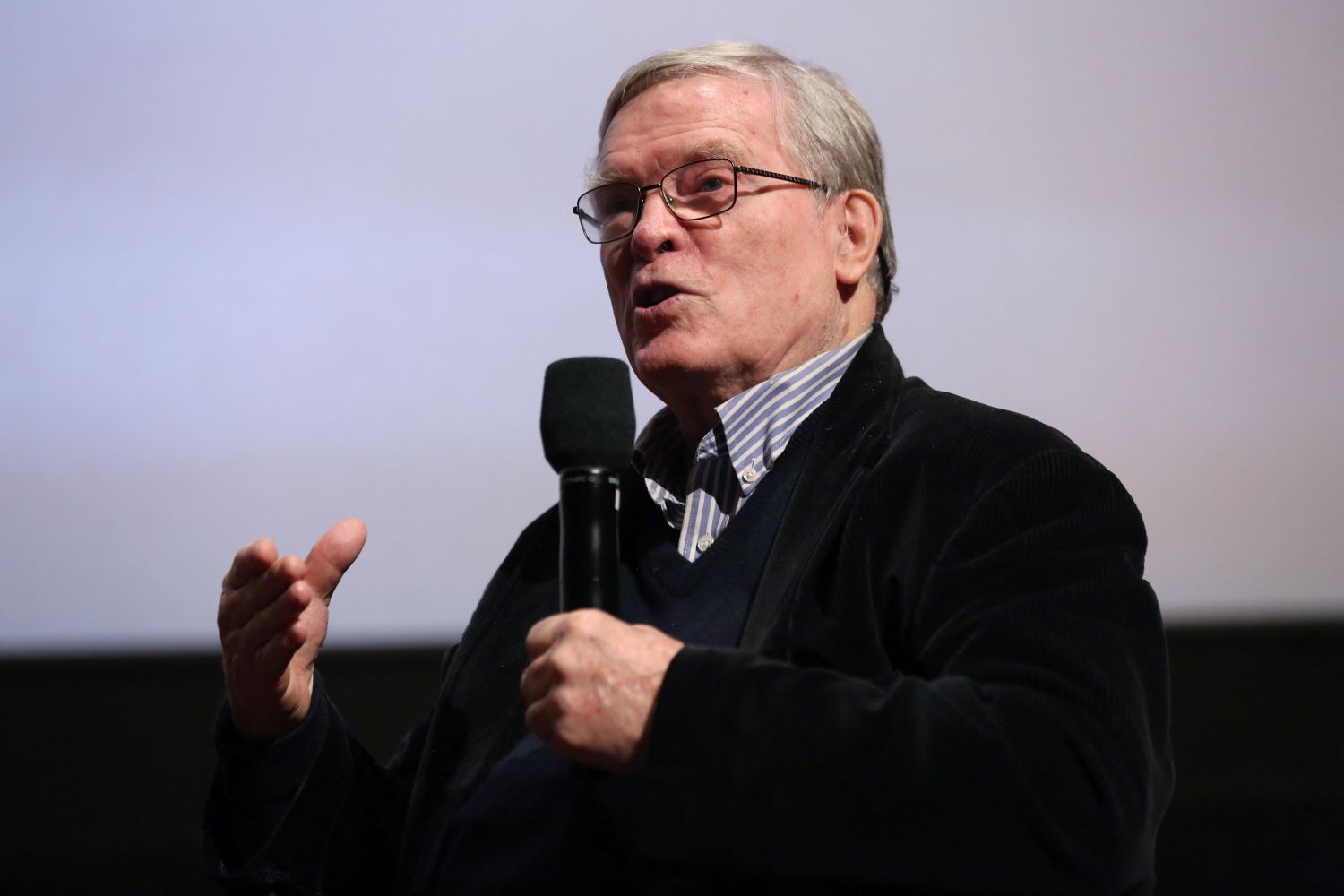 In celebration of the work and life of the late documentary master DA Pennebaker, IDA will be both digging into our archives and reaching out to his and Chris Hegedus’ many collaborators, friends and mentees for their reflections. In the meantime, here’s where you can catch some of his greatest films—in a trailblazing career that spanned over six decades.

Daybreak Express is a five-minute short of the soon-to-be-demolished Third Avenue elevated subway station in New York City, set to the classic Duke Ellington recording of the same name. Pennebaker’s 1953 debut film is a tribute to his love of jazz and is one of the pioneering examples of cinéma vérité, using no voiceover narration and a non-linear style of editing that incorporates a raw approach to lighting and color. Daybreak Express is available for streaming on The Criterion Channel.

Primary follows presidential hopeful John F. Kennedy as he campaigns against Hubert H. Humphrey in the 1960 Democratic primary in Wisconsin. This film was a breakthrough in documentary filmmaking style for its use of mobile cameras and lighter sound equipment that allowed filmmakers to gain a more intimate access to the candidates. Pennebaker, who co-shot and co-edited the film, was part of the Drew Associates team that included such doc giants as Albert Maysles, Richard Leacock and Robert Drew himself. Primary is a peek into the personalities and politics of the campaign trail as never seen before, and set the standard for a new style of documentary films and video reporting. Primary is available on YouTube, Amazon Prime and Google Play.

The 1967 film Dont Look Back is an intimate portrait of Bob Dylan in the midst of a career transition from rising star to the voice of a generation. Filmed during a three-week concert tour of England in the spring of 1965, this "two-way dance between camera and self-aware chameleon" looks into the good and bad moments of one of the greatest songwriters of our time. Dont Look Back is available on YouTube, Amazon Prime and Kanopy.

Monterey Pop is a 1968 concert film that documents the three-day Monterey Pop Festival and features performances by Big Brother and the Holding Company with Janis Joplin, Jefferson Airplane, Hugh Masekela, Otis Redding, Ravi Shankar, the Mamas & the Papas, the Who and Jimi Hendrix. The close-up shots created an intimate love story between the musicians, their music and the fans during the summer of 1967. Monterey Pop is available on YouTube, Google Play and The Criterion Channel.

Original Cast Album: Company captures live recording session of Stephen Sondheim’s 1970 musical Company. Unlike films, theater productions rarely have a permanent record, so a musical is preserved for posterity by the cast recording. This puts a lot of pressure on the cast to be perfect in the recording session, as captured in Elaine Stritch’s climactic performance of "Ladies Who Lunch."  For this film, Pennebaker and his crew used three hand-held cameras to film the singers, orchestra and the control booth and condense the dynamics of this intense, 18-hour session into a mere 60 minutes. Original Cast Album: Company is available for DVD purchase on Amazon.

The 1993 documentary The War Room is a behind-the-scenes look into Bill Clinton’s 1992 presidential campaign, featuring strategists/future television personalities James Carville and George Stephanopoulos. The documentary follows several campaign events from the New Hampshire primary upset victory, to debates with George Bush and Ross Perot, and all of the scandals in between leading up to the nail-biting days before the election. The War Room is a compelling and enlightening look at two remarkable men and the monumental effort and determination that is required to conduct and win a political campaign in the modern age. The War Room is available on Amazon Prime and The Criterion Channel.

The 2009 film Kings of Pastry follows a group of world-class French pastry chefs as they compete for France's most prestigious recognition of excellence in the pastry field: Meilleur Ouvrier de France. The film focuses sixteen finalists, including Chef Jacquy Pfeiffer, co-founder of Chicago’s French Pastry School, as they whip up the most gorgeous, delectable, gravity-defying concoctions and edge-of-your-seat drama. The filmmakers were given exclusive access to this high-stakes drama of passion, sacrifice, disappointment and joy in the quest to have President Sarkozy declare them one of the best in France. Kings of Pastry is available on YouTube, Google Play and Amazon Prime.

The 2016 film Unlocking the Cage follows the Nonhuman Rights Project (NhRP) and animal rights lawyer Steven Wise’s efforts to achieve legal rights for nonhuman animals. With affidavits from primatologists around the world, Wise and his team use scientific evidence to assert that cognitively complex animals such as chimpanzees, whales, dolphins, and elephants have the capacity for limited personhood rights that would protect them from physical abuse. This documentary is an intimate look at a lawsuit that could forever transform our legal system, and one man’s lifelong quest to protect "nonhuman" animals. Unlocking the Cage is available on HBO Go, Amazon Prime and Kanopy.

END_OF_DOCUMENT_TOKEN_TO_BE_REPLACED

Bob Dylan '65 Revisited: Looking Back on 'Don't Look Back' Documentary