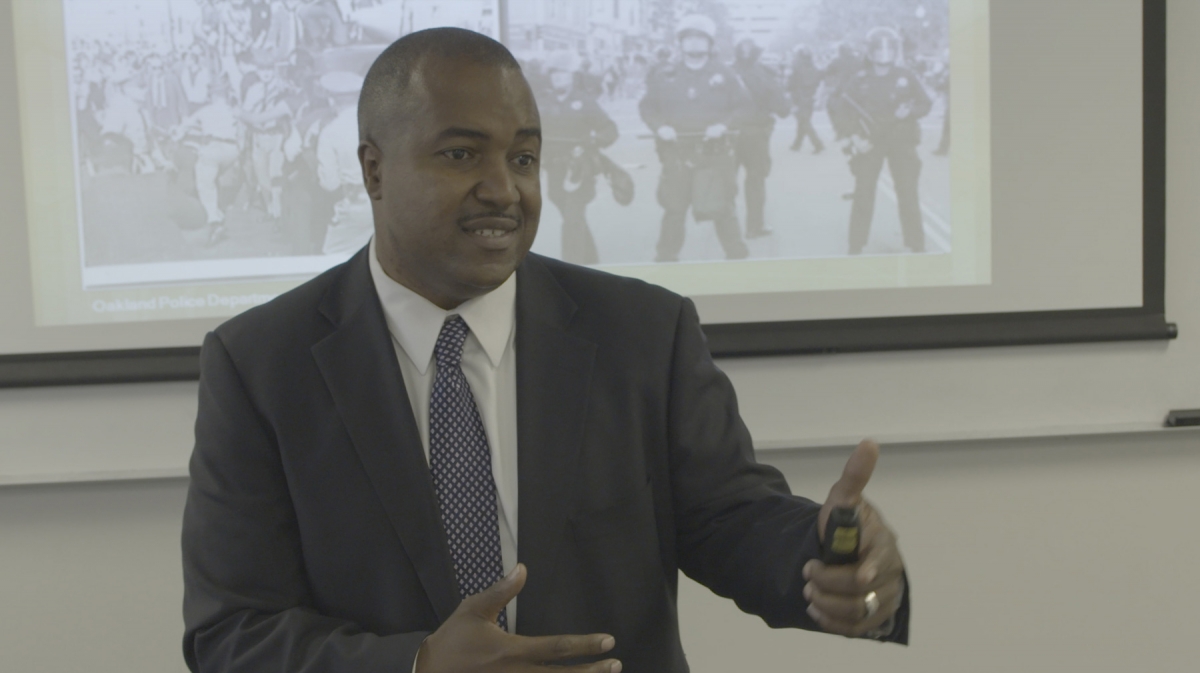 The second part in a trilogy exploring interrelated systems within the wider Oakland community, The Force, for which Peter Nicks nabbed the Best Directing, US Documentary award at this year's Sundance Film Festival, is a riveting cinema vérité look inside the Oakland Police Department as it struggles to implement the reforms deemed necessary to lift it out from under federal oversight. Filmed over an adrenaline-fueled two years, the film is also, unfortunately but honestly, a powerful portrait of best-laid plans gone dangerously awry.

Documentary was lucky enough to catch up with the OPD's own Deputy Chief LeRonne Armstrong, a caring and surprisingly candid Oakland native, en route from his northern hometown to the film's LA premiere.

Did anything about how the OPD was portrayed in the doc surprise you when you finally saw the completed film?

Deputy Chief LeRonne Armstrong: No, it actually didn't surprise me. I think director Pete Nicks did a really good job of capturing all the complex issues we're dealing with within the organization. I didn't know how it would turn out, but I think at the end of the day, everything we see onscreen is an accurate picture of all the challenges we're facing at the department right now.

Body cams play a role both in the doc and in policing these days—and many experts believe they change the behavior of cops during their interactions with the public. So I'm quite curious to know in what ways having Pete's camera present for so long might have changed your (and other officers') behavior. Were you aware of having to present yourself in a certain light whenever that camera was in the room?

No, I think we were one of the first police departments in the country to outfit our entire department with body-worn cameras, so I think from the officers' perspective, they were used to having a camera be present. I don't think that was surprising for us. I think the camera obviously has an effect both on the officers' behavior and on the people they come in contact with—who tend to act more civil, too. So I think from that perspective, officers were used to it.

But I do think there’s a level of trust that has to be gained for someone to bring a camera "behind the scenes," so to speak. I think Pete did a really good job of doing that. He had a great relationship with our public information officer, Johnna Watson. In every instance, when the camera was going to be there, she would let us know in advance. And she would ask people who weren't comfortable being there to let her know. In most cases officers were fine with it.

How long had you been using the body cams before Pete's camera came into the picture, so to speak?

We had probably been using body cameras for about three or four years prior to Pete coming in with his camera. And I think the officers, too, were interested in our story being told. We had no idea that there would be a scandal that would obviously rock the entire police department, but initially when the cameras came in, it served as an opportunity to demonstrate to the entire country what a progressive police department looked like, what a department in the midst of change looked like. So I do think initially the officers were optimistic about what potentially might show up on film. We didn't have any idea that it would become, like, "Wow, cameras are here!" [laughs] as we go through this really tumultuous time.

That's really fascinating because I had no idea that you'd been using the body cams for so long. So I guess that that would make a difference when you have a filmmaker in the room. It might have been more difficult for a department that hadn't been using body cams—and all the sudden a filmmaker shows up with a camera. I guess you guys were a little more used to being "on the screen."

Yes, and also when you're a department that is often facing the media, officers are pretty used to seeing cameras around.

So how has being in this film changed you and your colleagues?

For me, I think it just reinforced my commitment to change the culture in policing—not just in Oakland, but throughout the country. I think this is a really unique time in policing, where somebody has to be willing to confront the ugly truth of our history, and say to people that this is an opportunity for us to be better, and to be an institution that people respect and appreciate—and not just in some communities, but in all communities.

One of the things that's often missing in this conversation is that the people who need law enforcement the most trust law enforcement the least. Seeing the film really reemphasized to me the important role that I play, with my own background, of bringing that story to life and allowing officers to just learn from my own experiences—reinforcing how important they are to communities that face some serious challenges.

What struck me about the film is that it's a kind of "warts and all" picture of you guys, which I think actually helps your image because it shows transparency, which leads to more trust. If you see the downside of things, you’re more likely to trust. People might think, Hey, if they're revealing that, then maybe they are being more honest than we had expected.

Yeah, you hope that people see that this is the honest reality. It's not perfect. It's not pretty. We don't look great in the film. So it's a celebration of the Oakland Police Department—the ugly truth.

I assume Pete's being a local, Oakland-based guy was a factor in his gaining such unprecedented access, but since the OPD is a racially mixed force, I'm also wondering if the filmmaker's race made it any easier—or harder—for him to gain everyone's trust.

I think what was helpful was that Pete wasn’t just a "one and done" type of director. He really had come in with a different way of doing a documentary—pivoting on his work on The Waiting Room. His idea of examining systems within Oakland made it a very interesting project—to say that these systems that impact people could in some ways be interconnected. We thought that that was a very interesting direction.

He told us from the beginning that there was a trilogy of films, that this system of law enforcement was one that he wanted to touch upon, and that eventually the education system would be next. And so it only made sense for us as a department—at least we felt at the time when talks were initiated—that we also wanted to tell a story to the community of transformation, of a department that had been working hard to establish trust and change a culture. We felt that that was also an interesting perspective that we wanted to get out there. Unfortunately, and obviously, events happened that definitely had an impact on what we originally had anticipated.

It's interesting because right now in the documentary community there's this ongoing conversation about who has the "right" to tell a story—outsider versus insider—and obviously Pete being an Oakland-based guy means that he has a little bit more cachet coming into your community than, say, a New York filmmaker coming out to Oakland and wanting to tell that story.

Most definitely. I think Pete brought in that he was Oakland-based—but also it was so interesting to hear about The Waiting Room because we have so much interaction with Highland Hospital. And so I think that definitely bode well for him. But I also think Pete did a really good job of going into the community—getting some credibility by telling a story that had multiple sides to it. Not just embedding himself only with the police department, but taking the time to really go out into the community and get their viewpoint. For us, obviously there's a story to tell from inside, but there's also a historic narrative outside.

So what is the toughest scene for you to watch in the film—and why?

You know, the toughest scene for me to watch always is the scene—some people might [disagree and] say the scandal when it erupted—but for me it's the scene where there's an activists' meeting and a gentleman says, "There is no good cops." And then another gentleman responds, "If there are no good cops, then why am I here? I don't have any hope." It's such a powerful scene, and it's meaningful to me because it's a reminder that sometimes when people make mistakes, other people lose hope in the system, lose faith in the system. And so people like me, and all the other officers that do the job the way it's supposed to be done, we represent the idea that there are good cops that want to do the right thing. And more of us need to be highlighted, more of us need to be recognized—instead of only those that continue to violate the public's trust.

Finally, in the best-case scenario, what do you hope that this film could do for the prevailing attitude towards police departments across the country? Anything the film could do for your image—even with all the "warts and all" in it?

My hope is that people will recognize how challenging and how complex these issues are. To have a department that has to deal with issues around violence, with low levels of trust in the community, to be dealing with federal oversight—that is a very difficult job to do. And yet there are still men and women everyday who are committed to doing it. We're working hard, and I'm hoping for people to not lose sight of that. What I really give Pete credit for in the film is that he really did highlight that there are several complex issues. Despite protests in the street, there is still violence in the community that needs to be addressed. The reform efforts are still ongoing—and that may not be all that bad. Oversight is not always a bad thing in that it can uncover some ugly truths.

For a director like Pete Nicks and his crew, it takes a lot of courage to come into a police department in a community that has such a tumultuous history and try telling that story. I think he did the best job he could do as a director, by not compromising his integrity by telling a kind story about a police department. He just told what he saw from behind the camera—which is not always pretty, but it's true.

The Force is currently screening in theaters in New York, Los Angeles and the Bay Area through September 28 and will tour to Milwaukee, Philadelphia and other cities throughout the fall.

END_OF_DOCUMENT_TOKEN_TO_BE_REPLACED

Human Stories: Inside 'The Waiting Room'

What Did We Get from GETTING REAL?