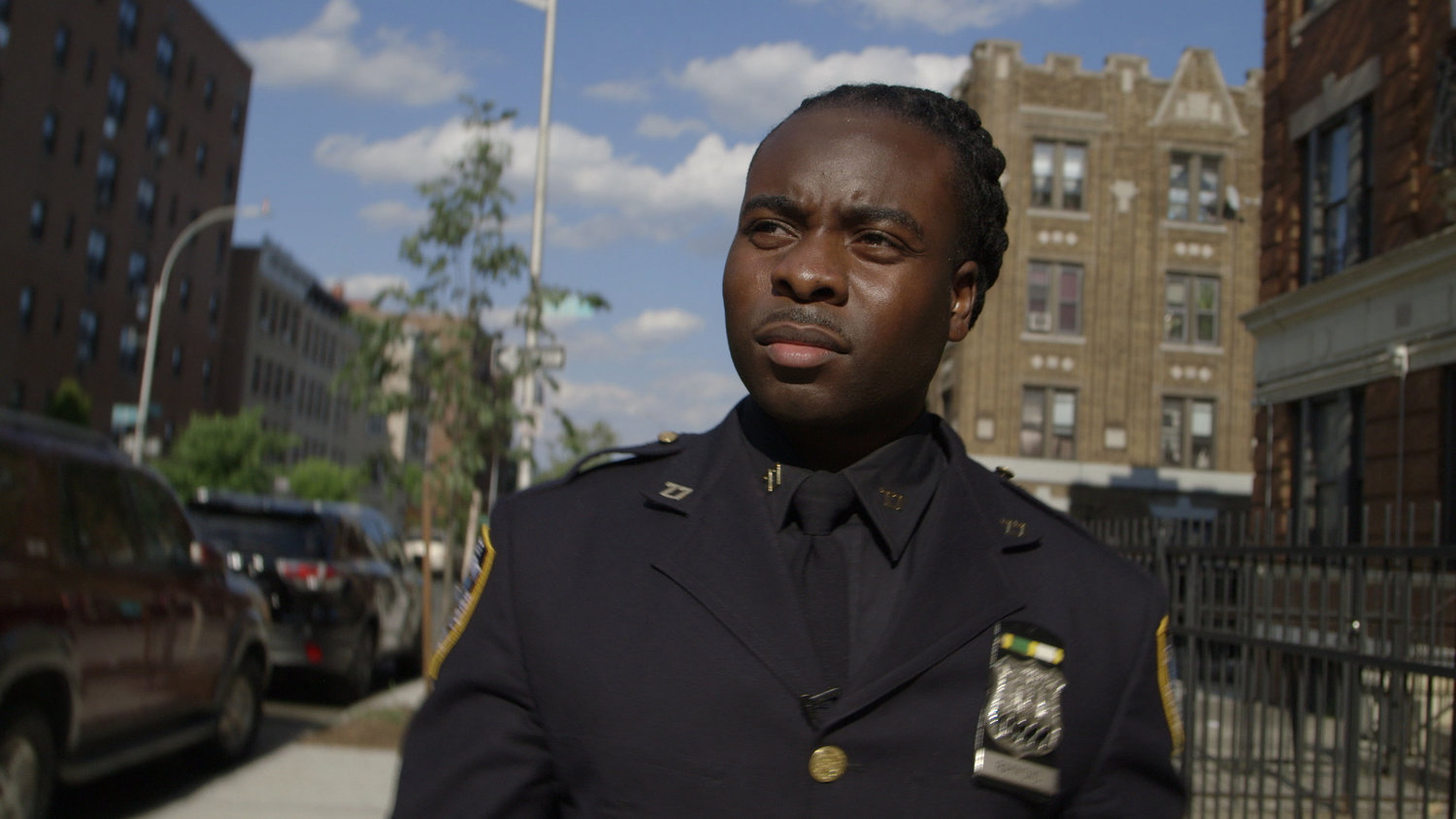 Though heroic activists have been pushing for change in policing across the country in recent years, they've mostly sprung from those communities suffering disproportionately under unjust law enforcement policies—not from the institution tasked with enforcing those policies. Which is what makes the NYPD 12, a dozen of NYC's finest who are truly living up to the moniker, so unique. Comprised of minority officers fed up with carrying out racially discriminatory practices and meeting quotas (outlawed, but nevertheless expected), these whistleblowers spent years putting both career and life on the line covertly gathering evidence to bring their unbendingly bureaucratic employer to court. And for most of that time, intrepid director Stephen Maing (High Tech, Low Life) followed along with them—gaining unprecedented access to the secret recordings and blue wall of silence's piercing accounts that make up his latest tour de force (no pun intended), Crime + Punishment.

Needless to say, it was a privilege to speak with Sergeant Edwin Raymond via email about his life as both a prominent civil rights activist and a proud cop. Crime + Punishment premieres in theaters and online August 24, through Hulu.

Though Steve [Maing] is a New Yorker, as far as I know, he doesn’t have any personal connection to law enforcement. So what made you trust this "outsider" with your story?

Sergeant Edwin Raymond: One of the other officers in the NYPD 12 named Adyhl Polanco is in many ways the pioneer of our efforts, and Steve had already been filming him, developing a relationship. When I first met Steve at a press conference, he approached me to ask if I'd wear a microphone. Assuming he was one of the press cameramen, I looked at him like he was crazy. This is when Polanco stepped in and said, "No, no. He's with us, he's good.' I had so much respect for Polanco that I didn't question his judgment, so I put on the microphone.

What impact has the film had, or that you hope it will have—both for you personally and for the communities of color and fellow officers affected by harmful policing practices?

I'm hoping the film makes early naysayers realize what I'm truly about: dismantling harmful policies! (Not hating cops, white people or being anti-police—as the critics have tried to charge.) Most importantly, I hope Crime + Punishment helps people in the community realize that just because someone is employed by the system, it doesn’t mean they're ignorant to its detriments. And in the case of the NYPD 12, people employed by the system are actively trying to make essential improvements.

I'm also hoping that law enforcement officials realize that the policy of de facto quotas further alienates us from the communities we're supposed to be serving. And also for officers to take an honest look at their respective departments, and hopefully take initiative making changes.

How did you go about navigating what could and could not be filmed? Do you have any advice for other whistleblowers working with journalists and documentarians?

Steve did an amazing job simply capturing what was going on, so during many scenes in the film I almost completely forgot that he was even there. What makes the film unprecedented is the amount of access we allow, so rarely did I feel there were things that he shouldn't film. My advice to whistleblowers is to stay grounded in morality, and to do your best to get ample support before going public. It won't completely prevent backlash, but helps to make it more bearable.

Watching the film left me wondering why the NYPD 12 has been forced to carry this burden of reform in the first place. The current problematic practices in the NYPD started literally decades ago—so what have the rank-and-file unions (not to mention organizations like 100 Blacks in Law Enforcement Who Care) been doing all this time? Is it just that the Black Lives Matter political moment finally makes this the right time to push for real change?

The NYPD is an extremely powerful and well-oiled machine with a hefty annual budget. After working so hard to have a career, many people aren't willing to put that hard work in jeopardy, even if it means being subservient to ignoble practices. The current PBA president, Patrick Lynch, has actually spoken on the record about the existence of quotas and how harmful they are. So I did expect at least a written statement in support of the NYPD 12's efforts, but his silence has been deafening.

I can thankfully say that with my current union, the Sergeants Benevolent Association, President Edward Mullins does support me in my struggle to bring these changes. So it shows that not all people are apathetic or blinded by false narratives. Although not leading the charge, 100 Blacks in Law Enforcement have supported us at press conferences concerning this issue, but overall what the NYPD 12 is doing is unprecedented.

You've suffered some retaliation as a result of your public stance (including, I believe, an internal affairs investigation). Do you have any regrets about being one of the faces of this fight? Or does the spotlight protect you in some way?

I have no regrets whatsoever about taking a public stance on this issue. After observing firsthand for years the harm caused by quota-based "broken windows" policing, I simply couldn't continue to watch and not try to do something about it. Although being the face of this fight comes with all sorts of burdens, it's a burden I carry honorably due to understanding how many lives will be positively affected once we're successful in this fight.

The "spotlight" does offer some protection in the sense that if anything happens to me it will be quite obvious by whom and why. But I still make sure my back is never to the door at a restaurant.