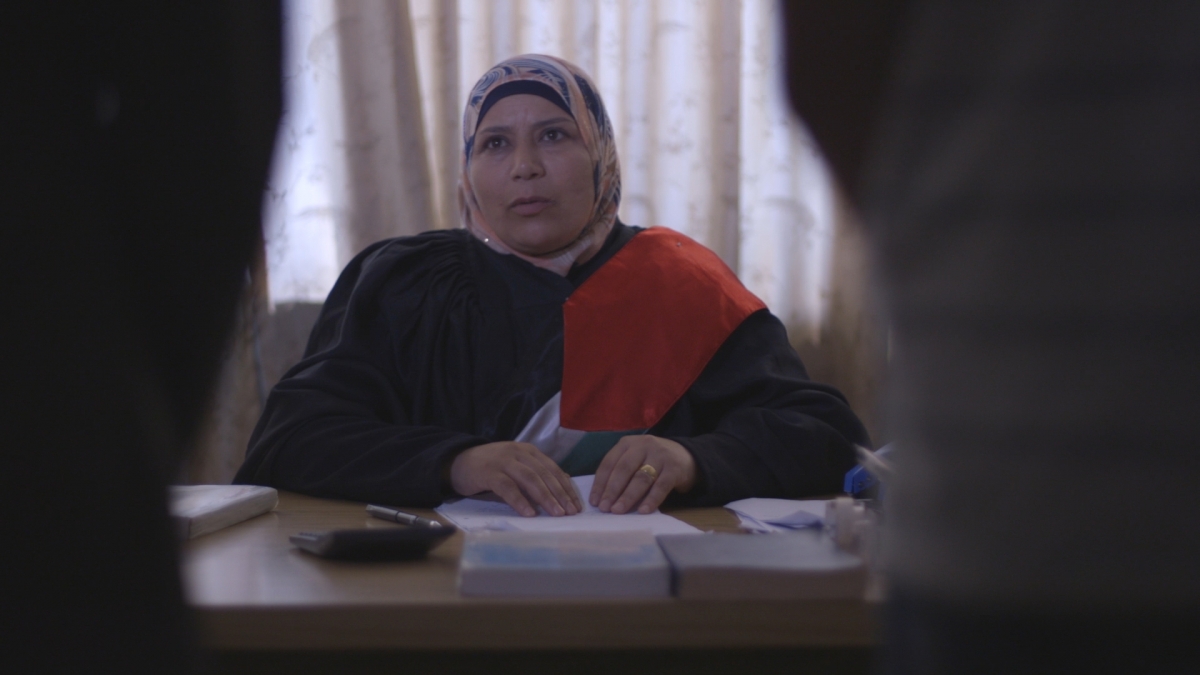 Since IDA's DocuClub was relaunched in 2016 as a forum for sharing and soliciting feedback about works-in-progress, four DocuClub alums have premiered their works on the festival circuit over the past few months. In an effort to both monitor and celebrate the evolution of these films to premiere-ready status, we reached out to the filmmakers, as they were either winding their way through the festival circuit, or gearing up for it.

In this edition of "The Feedback," we spotlight The Judge, which, following its DocuClub screening last spring, director/producer Erika Cohn will premiere at the Toronto International Film Festival.

Synopsis: Religious courts in the Middle East had historically banned women from adjudicating domestic and family matters—in both the Shari'a courts of Islam and the Rabbinic courts of Judaism—until Kholoud Al-Faqih dares to challenge that history. With the support of a progressive Sheik, Kholoud becomes the first woman judge with her appointment to a Palestinian Shari'a court in the West Bank, bringing a subtle new perspective garnered from her early professional life working with battered women as an attorney in both the criminal and Shari'a courts.

The Judge chronicles Kholoud's appointment, her first years as a judge, and her tenacious ability to maintain her position despite attempts to marginalize and demote her. Through Kholoud's eyes, the film examines the religious and legal stipulations between men and women according to Shari'a law, relaying how the worst aspects of misinterpreted Shari'a laws reflect a tragic misogyny—rape, beatings and polygamy—stemming from misconstrued ignorance of the Qur'an. As Kholoud's most compelling cases develop in gripping cinema vérité style, the film reveals precisely the kinds of misinterpretations of Shari'a law that Kholoud now has the power to correct.

With unparalleled access and a critical cinematic eye, The Judge follows Kholoud in and outside of the courtroom as she asserts her right to equality and redefines how Shari'a law perceives, treats and respects women. Illustrating a unique portrait of her sustained intervention, The Judge reveals that Shari'a is a system largely mischaracterized both in the Middle East and in the West. Amid a time of rapidly increasing global Islamophobia, the unprecedented Muslim Ban and future potential Muslim registry, The Judge illuminates how colonial occupation has impacted the legal and cultural worlds of the contemporary Islamic world, while reflecting a universal struggle for women’s control over their bodies, economic welfare, custodial rights and marital status.

We hoped to receive helpful, insightful feedback and get clarity about the film's narrative holes.

We had previously screened at SF Rough Cuts in March 2017.

There's a fine line between providing audiences with enough context and overloading viewers with too much information. We wanted feedback about how much background to include on Shari'a law and the Middle East.

I think the most valuable takeaway was instilling confidence in us as filmmakers that the film was on the right track, nearing fine cut.

We found that people actually didn't need as much contextual background as we had expected. After the film, despite it being a feedback screening, a lively, insightful conversation about women in the Middle East and Shari'a erupted. Everyone connected so deeply to Judge Kholoud and found the film incredibly relatable.

We reimagined the film's opening. One of the consistent notes was viewers wanted to see Judge Kholoud in court earlier in the film and witness more of her impact. We previously had the first court scene appearing at roughly 22 minutes into the film; now it appears around five minutes in. That scene, along with vérité scenes of Judge Kholoud counseling her neighbors and speaking at a lively women's group meeting, illustrate her boldness, drive and unique perspective on Shari'a.

What were the key factors that determined that your film was ready for the Toronto premiere?

After the DocuClub screening we made several structural changes, minor tweaks and major polishing prior to submitting to the Toronto International Film Festival. The feedback we received at DocuClub was instrumental in preparing us for submission.

Tom White is editor of Documentary/documentary.org.