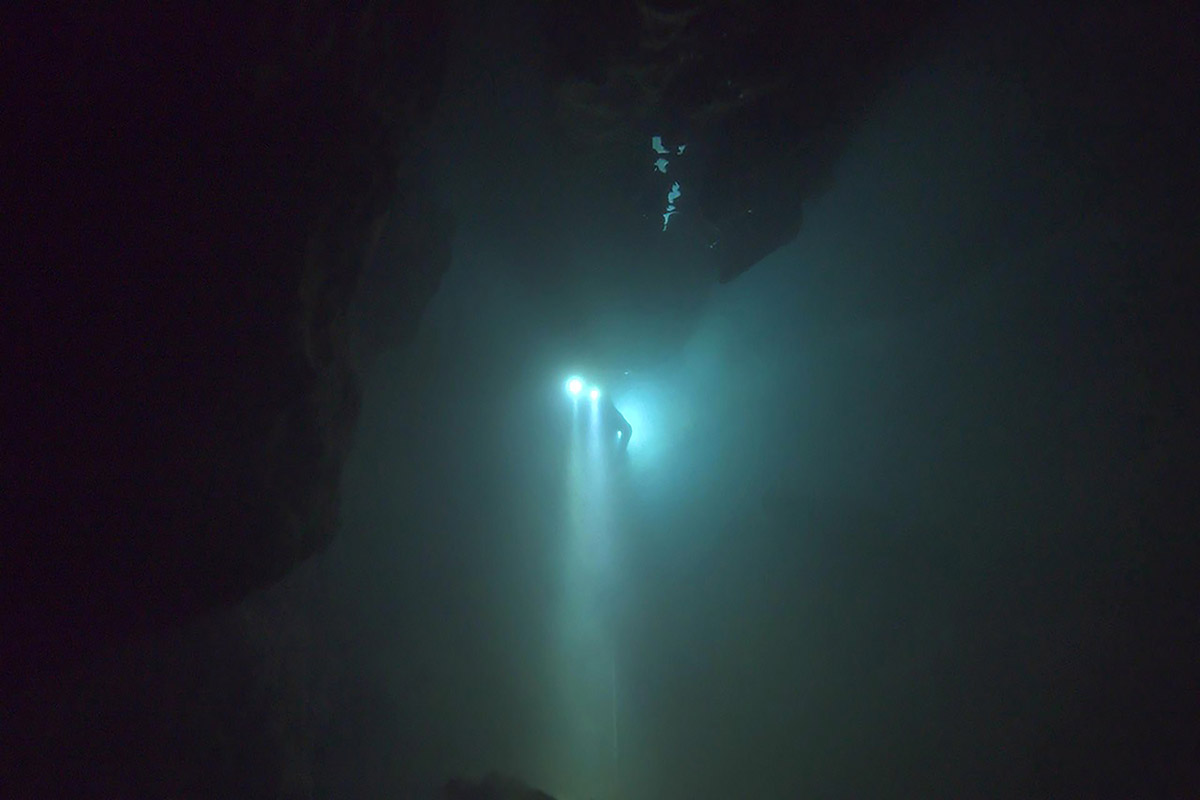 In 2018, a junior soccer team and their assistant coach went into a nearby cave in Thailand’s Chiang Rai province. It was a week before the cave was to close for monsoon season, but that year the rains came early, trapping them inside. The world spent the next 18 days watching a life-and-death rescue mission that involved 10,000 people and more than 100 divers.

The Rescue tells this story in full detail. Directors Chai Vasarhelyi and Jimmy Chin partnered with National Geographic, for whom they’d made the Oscar-winning Free Solo, which documents Alex Honnold’s attempt to climb El Capitan without a rope. But this time, the husband-and-wife team couldn’t take their usual vérité approach, since filming was after the fact. They also faced the hurdle of COVID. Production had been scheduled to begin in Thailand in February 2020, then everything went into lockdown.

Despite this, Vasarhelyi and Chin managed to craft a riveting film by surgically assembling multiple elements: some 2,000 archival clips, including never-before-seen footage from the Thai Navy Seals; interviews with rescuers and government officials; VFX renderings of the cave based on a 3D scan; and reenactments by the divers themselves.

The masterminds behind the rescue plan were an unlikely duo: retired firefighter Richard Stanton and IT consultant John Volanthen, both middle-aged Englishmen who did cave diving as a hobby. They and other volunteer cave divers were ordinary middle-class citizens—except for this niche hobby, which left them better equipped than the Thai Navy Seals to navigate the narrow passageways, murky waters, and strong currents in the Tham Luang cave. Another central player was Dr. Richard "Harry" Harris, an Australian anesthesiologist and experienced cave diver. He reluctantly agreed to the duo’s plan to anesthetize the children to prevent panic during their three-hour journey out of the cave—a detail that was kept secret for quite some time.

"They’re facing two really bad choices," Chin summarizes. "One: Leave them in there to die slowly. Or two: anesthetize them and potentially kill them trying to get them out."

The following scene is a five-minute sequence showing the first boy’s rescue. "The objective of that scene was to allow audiences to understand the feelings and experience of those rescue divers, because they were truly uncertain," says Vasarhelyi. "Harry says: 'It felt like euthanasia.'"  But with oxygen running low in the chamber where the boys were trapped, it was their only hope.

It’s day 15. Six days earlier, Stanton and Volanthen had located the boys huddled on a rocky ledge 2.5 miles inside the cave. Today was the day they would attempt their risky plan.

We see the divers dip into the water at the cave’s entrance. A VFX animated graphic takes over, showing a diver swimming through the cave’s narrow channels. The VFX cave turns transparent, the better to see its torturous geography, water levels, diving guidelines and chamber names. While various divers narrate, shots alternate between VFX and underwater footage, until the divers surface in front of the boys, who quietly look on.

A Thai Navy Seal helps the first child into his wetsuit and mask. Dr. Harris takes him onto his lap to give the ketamine injection. They dip the unconscious boy’s head underwater and Jason Mallinson, a British power station engineer and cave diver, submerges with the child. We watch them steer around rocks and through tight passageways, illuminated by headlamps. After 300 meters, they reach the next chamber, where the boy is passed to waiting hands. All breathe a sigh of relief that he’s still alive.

The actuality footage looks seamless. But it’s stitched together from disparate sources, including the divers’ GoPros, Thai Navy Seal footage, and reenactments in a water tank in England.

"The story is great," says Vasarhelyi, "but it all transpires in a cave that’s pitch black, you don’t meet who you’re trying to save until day 10, and there’s no footage. Even if they had a ton of cameras inside, there’s no light. In addition, it was a very sensitive rescue where they had the potential of bringing out dead children, so they said absolutely no filming inside the cave."

Nevertheless, the divers had told the directors that the Thai Navy Seals had been filming, a fact confirmed by American Special Forces. But no one had seen the footage. "The one clip that had been released to the world was them finding the kids," Vasarhelyi says.

The directors spent two years negotiating with Navy officials. Meanwhile, they’d assembled a rough cut from other sources. Eventually the Navy Seals relented, handing over footage from a motley array of cameras: GoPros, Garmins, iPhones and a Sony A7S. "I thought we were going to get 90 minutes; it was 87 hours of excellent footage," Vasarhelyi recalls. "It was like we were living off of fumes, then suddenly you’re drinking from a fire hydrant." But this came last-minute, forcing the directors to deconstruct, then reconstruct the film just six months before its theatrical release.

The Navy Seal footage comes into play at various points in the sequence: when the divers first enter the cave and gear up; when Dr. Harris injects the child; and afterwards, when a daisy chain of 200 people hoist the boy out of the cave. The sequence also uses some POV footage from the divers’ GoPros.

As luck would have it, several years earlier National Geographic had done a 3D survey of the 6.2-mile cave system. This was for their earth-science series Drain the Oceans, which had an episode on the Tham Luang cave. Los Angeles-based Barnstorm VFX built animations from this scan, so they’re 100-percent accurate, down to every twist and turn.

"We were trying to give context, geography and scale,” Chin explains. “Until you see that graphic, you’re like, 'Oh yeah, it’s a deep cave.' Then you see it and you’re like, 'Whoa! You have to dive these anesthetized kids underwater in the dark, navigate an unconscious person while trying to keep them alive for three hours?!'"

The directors’ first version used hand-drawn maps. They’d photograph those on an iPhone and put them in the cut. Then they’d find the right part of the scan and test camera moves on a grey-scale version of the graphic. After tweaking, Barnstorm would bring the 3D graphic to life.

Divers could barely see through the dark mucky water, even with headlamps. So for visibility’s sake, it was necessary to recreate the underwater footage in a tank. (COVID prevented the directors from flying everyone to a real cave, which they would have otherwise done.)

The divers were fully on board with the reenactments. Exacting, even. "Which is what we wanted," Chin says. "They were like, 'No, no, no. You’d never do that.'" Chin appreciated their fastidiousness because he’s worked on both sides of the lens as a climber. "When I get filmed and someone says, 'Why don’t you do that?' It’s because every climber in the world would laugh," he recounts. "Those details matter."

They created a modest cave out of three small movable pieces, modeled on the 3D scan. "They were so ghetto," Vasarhelyi says with a laugh. "But we were lucky enough to find an extra piece of cave from somebody else’s big-budget movie. One of the people who worked at the tank said, 'Look what we found!' So we could augment our sets."

"You know what they make the sediment out of to dirty the water?" Vasarhelyi continues incredulously. "Ground broccoli!" Real sediment would jam up the tank’s filtration system.

This sequence is just one example of how perfectly the reenactments blend in. Navy Seal footage captures the divers entering the water, then as soon as they put their heads under, it cuts to the tank. Also reenacted: the Navy Seal helping the child into his wetsuit and all footage after Jason Mallinson submerges with him, feeling his way through the dark channels with the help of a guide rope. (Astute viewers may wonder how on earth anybody could capture the profile view of Mallinson swimming. A reenactment is how.)

For the reenactments, a UK crew deployed an Arri Alexa Mini coupled with Zeiss Supreme and Zeiss Supreme Radiance primes. For talking-head interviews in England, Australia and Thailand, local crews used a Sony Venice, which was easier to find in Thailand. Interviews utilized Zoom coupled with QTake, which allowed the directors to fine-tune framing, access camera metadata, and make eye contact with their subjects, whom they’d never met in person. “It’s as close as you can get virtually,” Chin says about the set-up.

Commenting on the sequence, Vasarhelyi says, "The jewel in that scene—the nonfiction gold for me—is when Dr. Harry anesthetized that first child. That footage is real. Our objective was to build that up, make it vivid, and do justice to the journey they’re about to take."

Chin adds, "I’ve been on rescue scenes. There’s a lot of responsibility when you know you’re the only ones capable of saving these children. If they didn’t succeed, it would not only be personally devastating, but they’d be held personally accountable [with possible jail time in Thailand]. They weren’t just putting their conscience on the line, they were putting everything on the line. And yet, they still chose to do it."

The Rescue opens the 2021 IDA Documentary Screening Series on September 20. The film premieres theatrically on October 8 through Greenwich Entertainment, followed by a later airdate on National Geographic.