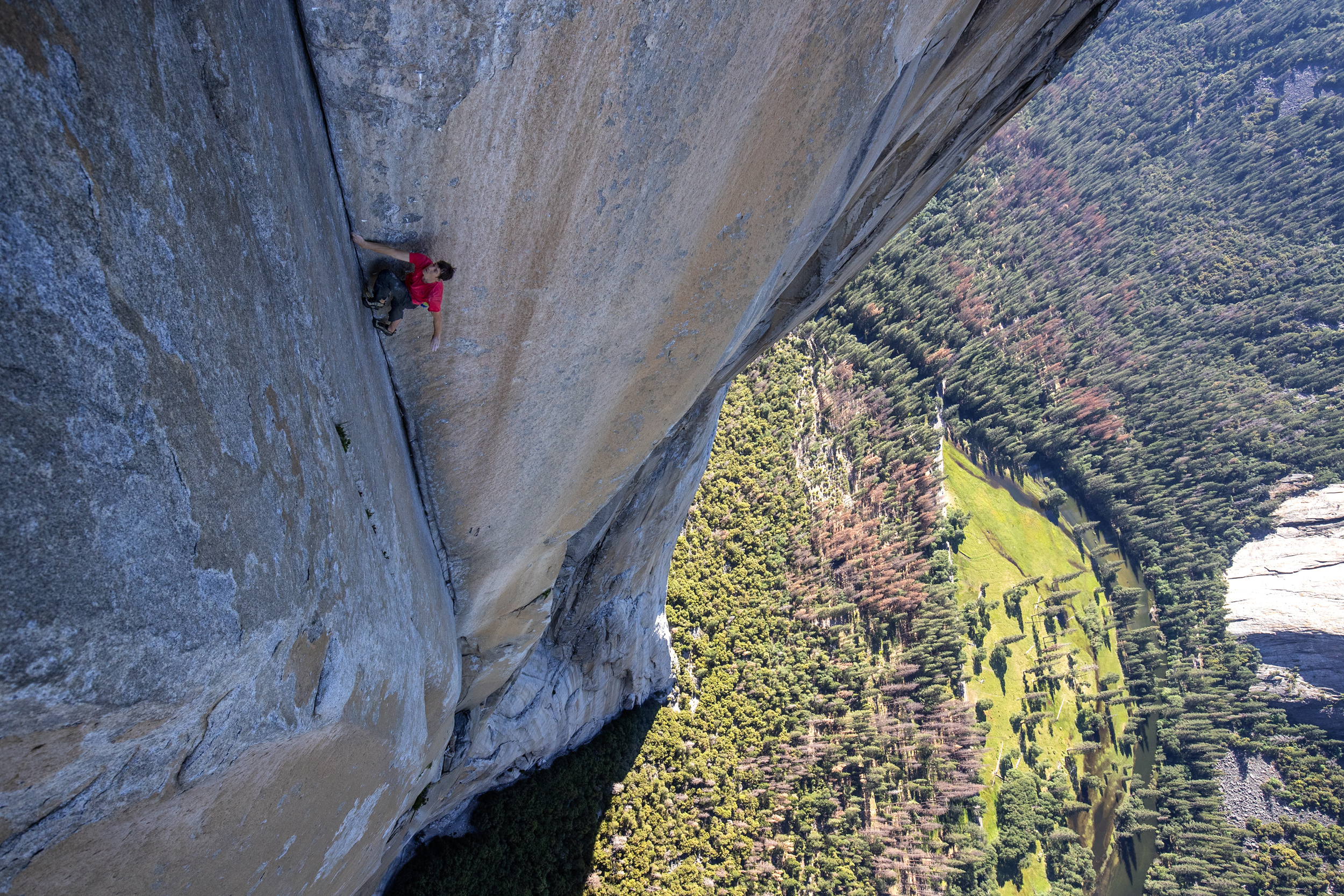 Documentary filmmaker Chai Vasarhelyi and her husband, climber and filmmaker Jimmy Chin, haven’t been making movies together for all that long. But you wouldn’t know it when talking to them, as their synchronicity is acute, even over a conference call with each of them in different locations.

Vasarhelyi made her first documentary—a feature about friends in Kosovo during the war at the turn of the last century—when she was still an undergraduate student at Princeton University. Though she went on to work under narrative director Mike Nichols on Closer, nonfiction was her passion. She set off to tell stories that spoke to her, and she swept up quite a few awards on the festival circuit in the process.

Chin was a professional athlete, competing in skiing and rock-climbing competitions around the world, when he picked up a camera about two decades ago and started photographing the athletes around him. Not long after, he segued into film, making a few documentaries about perilous climbs around the world.

For Vasarhelyi, “Filmmaking is a muscle,” something that happens almost automatically, and which she loves dearly. Chin’s work, as well, is both literally and figuratively a muscle that he must keep in shape. After they met at a conference, where Vasarhelyi heard Chin speak about his failure to scale the daunting Mount Meru in the Indian Himalayas, they began a courtship and working relationship all in one. They co-directed their first project, Meru, in 2015, an astounding account of the aforementioned attempt to ascend the 20,702-foot peak.

“It was about how failure ultimately pushes you on to succeed,” says Vasarhelyi. “I remember first watching the raw footage and everything about Jimmy burst through every frame—his relationship to the outside world, the spectacular way of capturing these images, the heart and loyalty and friendship, the depth and respect that was brought to the subject matter.”

Vasarhelyi helped Chin to tell his story, and the two fell in love and married in 2013. They had two children between Meru and their latest collaboration. Free Solo is another awe-inducing climbing film that chronicles the free-solo (meaning without the assistance of ropes or harnesses) climber Alex Honnold’s 2017 scaling of Yosemite’s El Capitan—an unprecedented feat of human endurance, courage and zen-like focus. Honnold completed the climb in three hours and 56 minutes.

Documentary spoke to the ambitious and adventurous couple about the high stakes of the film, the happy accidents, and the original eco-warrior doc they’re working on next.

Documentary: Jimmy, do you think of yourself primarily as a climber or a filmmaker?

Jimmy Chin: They’re so woven together that I guess it depends on the day. I would say that I'm a professional athlete, a filmmaker and a photographer, if you were to break it down by sources of income; they're distinct, but they're very much intertwined.

D: How do you handle both climbing and cinematography at the same time?

JC: Again, I think it depends on the moment. It’s only possible, though, if you have a high level of comfort with the climbing and a high level of comfort with the shooting, because at any given moment you’re doing both and you only have a limited amount of bandwidth. Mostly, it takes a lot of experience, spending a lot of time doing it so that it all becomes very familiar. 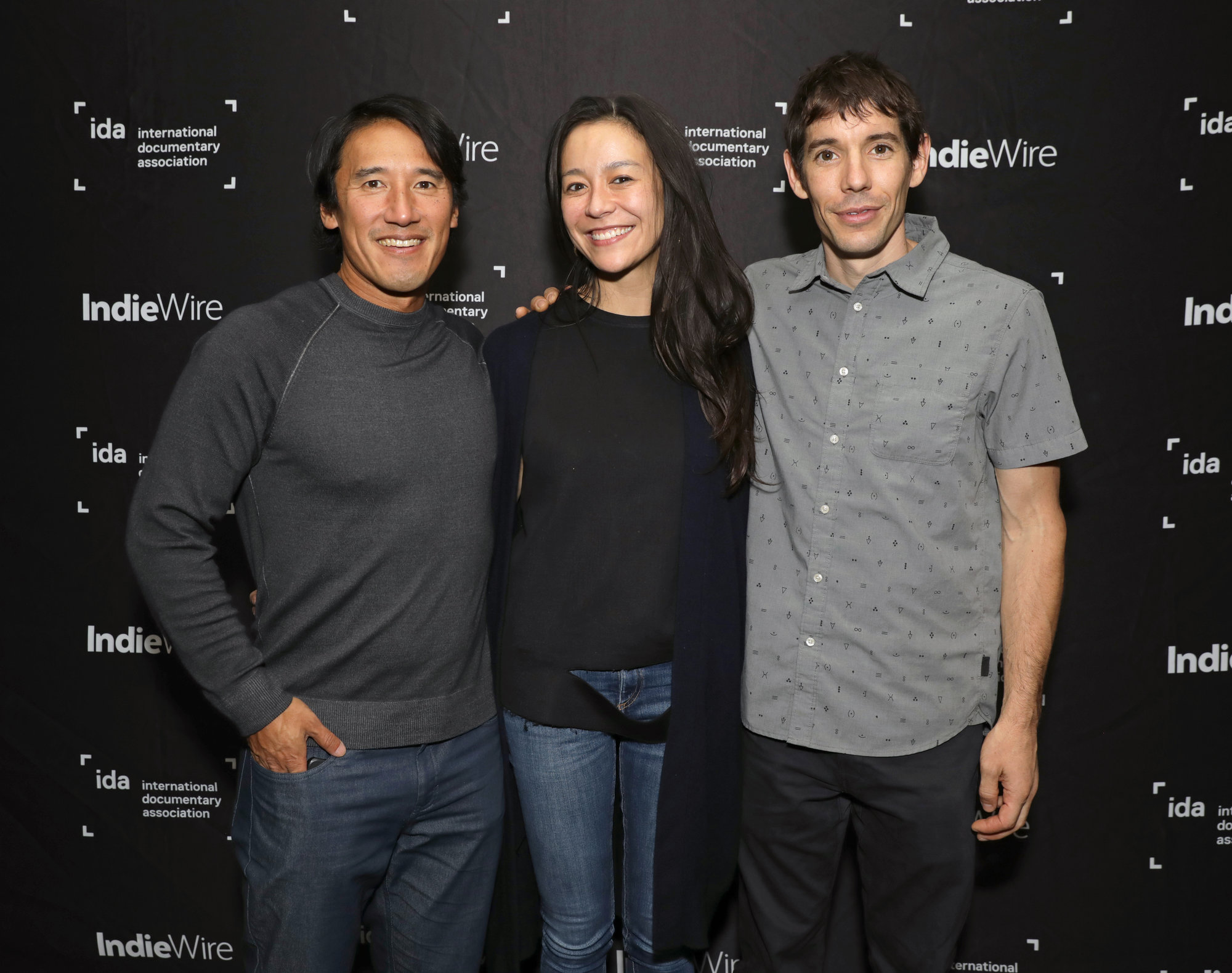 D: There’s a moment in the film where Honnold decides to not climb, though you’d all prepared for it that day. And then he goes out the next day, in the dark morning hours, to begin his ascent, which ultimately ends with his success and in record time. Was that perfect turning point planned in any way?

Chai Vasarhelyi: The difference between fiction and nonfiction is in nonfiction you really don't know what's going to happen next; you never do. That’s the beauty and also the fear in it. The film began as a character portrait of Alex, this fascinating guy. Jimmy and I believed we could bring this [character to life on screen], showing who he is and was, how as a child it was less scary for him to go out and climb by himself and then to speak to another person. He taught himself to eat vegetables because he found out it was good for him; he wasn't hugged as a kid, so he taught himself how to hug. It was this idea that with intense discipline and determination that you apply to yourself, you can achieve your dream, and that was something that inspired us deeply. We never knew if Alex might ultimately free-solo El Cap, but we were going to be there for the process. And that made it nerve-racking in terms of the narrative; it could end in so many different ways, notwithstanding the risks involved.

D: Were there any happy accidents that happened while watching the narrative unfold?

CV: The happy accident was Sanni [Cassandra “Sanni” McCandless, Honnold’s girlfriend]. When we began making the film, Alex was online-dating; we weren’t sure how he was going to handle that with this very serious climb as well. And he met this remarkable woman who was intelligent and self-confident enough to push back on him and tell him what made her uncomfortable, while still showing her love for who he is. That was completely new for Alex. No one had ever done that. So suddenly there were two mountains to negotiate: the woman you love and the literal mountain that he needed absolute clarity on to climb safely and successfully. That was a live situation that we were filming, and it contributed to the evolution of the narrative, seeing how those characters grew.

D: What is it like filming your friends, knowing that the stakes are so high?

CV: I mean, that's the existential question at the height of the film, right? If by the act of being filmed, did he seem more likely to fall? We totally trusted Alex. We believed in his decision-making. We believed that if it didn't feel good to him while we were shooting the film, he would turn around. Otherwise, making this film was impossible. Early on we made a pledge that the needs of the film would never trump the needs of our subject; the production did not come before Alex.

JC: It’s exactly like Chai's saying. We had another advantage, though: every person in this crew was an elite professional climber. That gave us unique insight into his process. We understood exactly what he was doing and why he was doing it and how prepared he was. We all know what it feels like to be 100 percent prepared for something, and we also know that the stakes can be very high, but we've all known him for 10 years and seen him do what he does, so we were confident in our decision-making as well. And we had to do a good job filming. We were building our own camera systems up there, figuring out power sources, focus-pulling, all of it. It’s interesting to think that he was soloing, but there was a tremendous amount of teamwork and trust among everybody that had to be there so we could all do our jobs perfectly. And Alex was going to do what he was doing perfectly.

D: You have been nominated for an Oscar now. Was there a point that you knew you had something really special?

CV: This film was so difficult and such a commitment, a heavyweight for so long while we were making it that we never really thought beyond that. We knew we had something special in Alex himself. We didn't know if it would speak to other people, just that it spoke so passionately to us. And that’s why we could take on those risks and go on this journey with Alex. It has been incredibly gratifying that people are inspired by the movie and by him.

D: Do you have something in the works for your next project together?

JC: We are in the beginning stages of a documentary about Kris Hopkins [an American conservationist and former CEO of Patagonia, Inc.]; her husband, Doug Tompkins [an outdoorsman, conservationist and founder of North Face who passed away in 2015;] and Yvon Chouinard [rock climber, environmentalist and founder of Patagonia]—all arguably the greatest conservationists of our time. Along with their eco-focused companies and national parks creations, they were integral in one of history’s the largest land handovers: 18 million South American acres. They have an extraordinary story essentially defining outdoor lifestyle and culture. We're all following in their footsteps.

CV: It’s the Out of Africa for our generations. It's the radical-living love story that can inspire people with this idea that we have only a finite amount of time on this earth; what are we going to do to save it?

Free Solo will screen as part of IDA’s DocuDay, a daylong showcase of the Academy Award-nominated documentaries, taking place at the Writers Guild of America theater in Beverly Hills.

Valentina Valentini is a freelance journalist traveling the world in search of her next story. She covers entertainment, travel, food, culture and people for Vanity Fair, BBC Travel, Marie Claire,and many more. Follow her adventure at @valentina_writes.

END_OF_DOCUMENT_TOKEN_TO_BE_REPLACED

Taking IMAX to the Max: Greg MacGillivray Is the Grandmaster of the Giant Screen