Awards Spotlight: 1971: The Year That Music Changed Everything 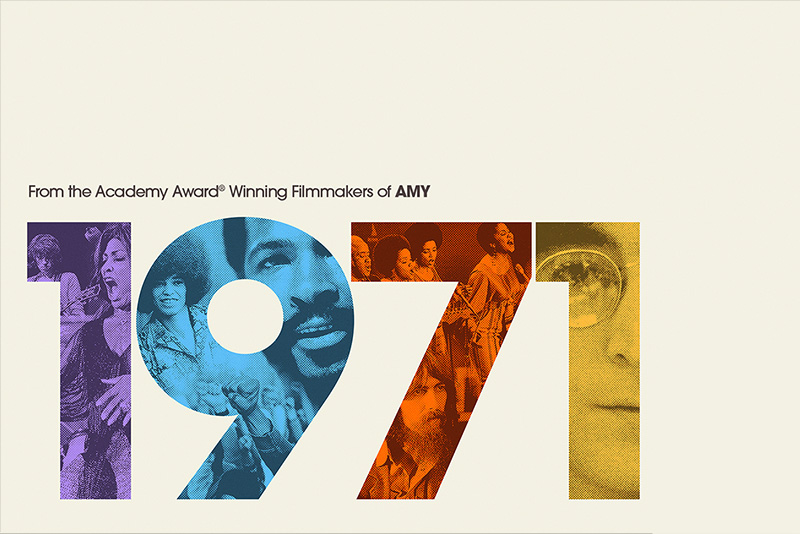 In a tumultuous era, 1971 was a year of musical innovation and rebirth fueled by the political and cultural upheaval of the time. Stars reached new heights, fresh talent exploded onto the scene and boundaries expanded like never before.

Asif Kapadia  is an Academy Award, BAFTA and Grammy winning director, best known for his trilogy of narratively driven, archive constructed, genre defining films; Senna, Amy & Diego Maradona. Amy won the Academy Award for Best Documentary Feature, the BAFTA for Best Documentary, the European Film Award for Best Documentary and a Grammy for Best Music Film. Senna won BAFTAs for Best Documentary and Best Editing and was nominated for Outstanding British Film of the Year. Kapadia also wrote and directed his narrative debut The Warrior, which was nominated for three BAFTAs, winning Outstanding British Film of the Year and the Award for Special Achievement by a Director, Writer or Producer in their Debut Feature. Kapadia directed episodes of Mindhunter for David Fincher & Netflix, and recently directed & executive produced the Apple TV+ series The Me You Can't See with Oprah Winfrey and Prince Harry focusing on mental health and well being.

Academy Award® winning James Gay-Rees is best known for producing high-profile documentary films including the Academy Award®, BAFTA and Grammy-winning Amy, the double BAFTA-winning Senna, both directed by Asif Kapadia, and the Academy Award® nominated Exit Through the Gift Shop, directed by Banksy. He has now produced 17 films, and in 2016 the Producers Guild of America awarded James as Outstanding Producer of the year.

Chris King is one of the most seasoned and creative documentary editors of his generation with more than 40 films for cinema and television to his name, most notably the Academy Award nominated Exit Through the Gift Shop (2011), the BAFTA Award winning Senna (2012), the Academy Award winning Amy (2015), and Diego Maradona (2019.) 1971 continues his long collaboration with Director Asif Kapadia and Producer James Gay-Rees. In 2012 King was awarded the BAFTA Film Award for Film Editing for his work on Senna. He is twice the recipient of the American Cinema Editors Documentary Award for his work on Exit Through the Gift Shop and Amy, and has been nominated and won numerous awards for his television work including an EMMY, a BAFTA TV Award and a Royal Television Society Award.

James Rogan is a BAFTA-nominated film director, producer and screenwriter, with a track record of crafting multi-award-winning series and feature documentaries that have been shown around the world. Over the past year James has been directing a soon-to-be-announced three-part documentary series alongside Academy Award-winner Steve McQueen, as well as producing two films, Black Power: A British Story of Resistance  and Subnormal, to sit alongside McQueen’s Small Axe series of films. As the creative director and executive producer at Rogan Productions, James has produced many ground- breaking films including: BAFTA nominee Stephen: The Murder That Changed a Nation for BBC1, Reel Screen award-winner Putin: A Russian Spy Story for Channel 4 in the UK; the double-Grierson award-winning Stabbed: Brtain's Knife Crime Crisis for BBC1; Dark Secrets of a Trillion Dollar Island: Garenne for BBC Storyville and ZDF/ARTE; The Confession for BBC Storyville, BFI, and Creative England.