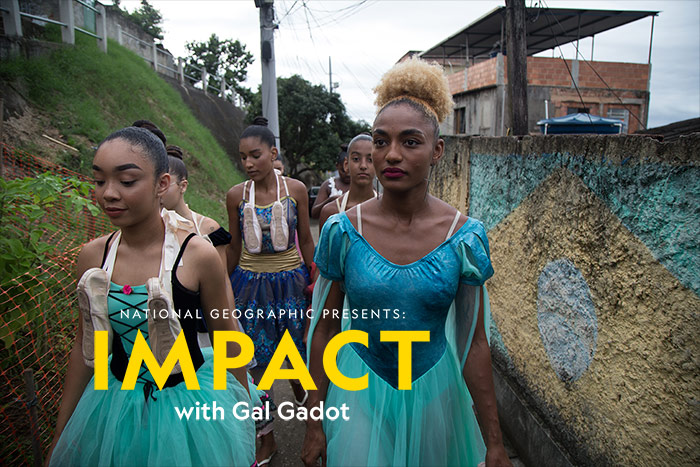 National Geographic Presents: IMPACT with Gal Gadot is a documentary short series following the powerful stories of six women making an extraordinary impact on their communities. Despite living in areas marred by violence, poverty, discrimination, oppression, and natural disasters, these brave women remain undeterred as they stand out, speak up and lead. The women in each short film come from different backgrounds, yet are all connected by their unwavering determination and commitment to improving the lives of those around them.

Roth is an Academy Award, Emmy Honors, DuPont-Columbia and Sundance Award-Winning non-fiction filmmaker with over 25 years of creating documentary features, series and shorts. Among her dozens of social impact films, she is the executive producer, writer and director of the Emmy Honors winning international series, Daughters of Destiny (Netflix Originals), Oscar® winner for her film Freeheld (HBO), and is currently directing the upcoming premium documentary Mary J Blige’s My Life (Amazon Originals). Her international work has garnered the highest of honors in documentary, film, television and journalism with over 60 awards, including the Oscar, The Television Academy Emmy Award for Social Impact, Sundance Prizes, Cine Golden Eagles, Casey Medals, Impact Doc Awards for Best in Show and Outstanding Achievement in Filmmaking, IDA nominations, audience awards and jury prizes at festivals around the world, as well as top honors for work in social impact, social justice, witness to history, legacy, youth empowerment and women’s rights.

Kayla Gore (Founder of My Sistah’s House and the Tiny House Project MSH) has dedicated her life to helping homeless transgender women of color in Memphis, Tennessee. Having experienced homelessness and violence herself, Kayla has created a safe community for these notoriously discriminated-against people. She is building more than two dozen houses across Memphis for transgender women who need safety and a place to call home.

Arianna Font Martin (Chief Strategy Officer, Remora): is a 20 year-old college student in Puerto Rico who, after Hurricane Maria devastated the island, is on a mission to ensure that every person struggling has access to clean and safe water.

Chief Shirell Parfait-Dardar (Traditional Chief of the Grand Caillou/Dulac Band of the Biloxi-Chitimacha-Choctaw Tribe) is the first female chief of a Southern Louisiana tribe who are expected to be among the first climate refugees in the United States. Chief Parfait-Dardar is working to preserve the legacy of her ancestors, the lives of her community today and the future of her people.