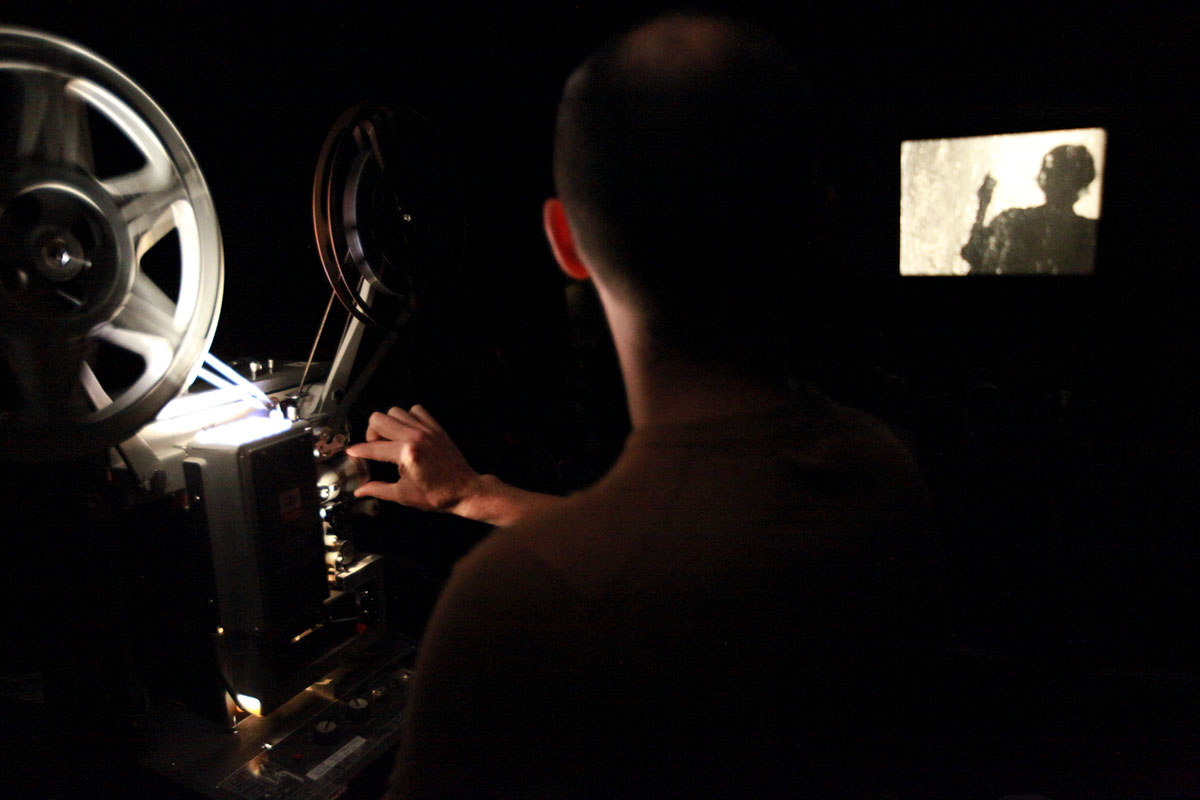 “I’ve watched every single one of us struggle financially and physically from the pay and the hours. Many, including myself, have huge debts from travel and lodging costs that our seasonal salaries wouldn’t cover. I’ve seen friends fall asleep at the wheel, or be scared to drive home after an 18-hour day…”

Stories like these are all too common on anonymous Instagram accounts such as OfftheFestCircuit and FestStafferStories, which chronicle the inequities experienced by film exhibition workers from across the nation. Hundreds of posts recount incidents of exploitation, abuse, sexism and racism, but most of all, they convey a systemic disregard for the devoted individual workers who help program and organize such screening events. As one poster chides, “I’m so devastated that the industry I love is so neglectful of the humanity they claim to honor. I guess it only counts when the empathy is on screen.”

This hypocrisy is particularly glaring in the documentary world, where the makers, funders and presenters of nonfiction media are cognizant of such issues in the work they create and support. As the Flaherty Film Seminar’s new executive director, Samara Chadwick, says, “In the documentary context, we’re exposed to stories of emancipation and liberation, and we like to think of ourselves as progressive and proposing solutions to capitalism, but inherently, we’re working in institutions that are inherently fragile and have terrible working conditions.”

Like many nonprofit executives, artistic directors and chief curators, Chadwick rose through the ranks of film festivals, enduring years of low pay and overwork. “It was my reality for years as an independent contractor working in the festival exhibition space to forgo certain rights and expectations of wage fairness for the sake of this idea of doing something that’s intellectually and creatively fulfilling,” she says. “There’s an expectation that people will bend over and submit to total inequity because they believe in what they’re doing.”

“I’m so devastated that the industry I love is so neglectful of the humanity they claim to honor."

But Chadwick and others are beginning to question the “labor of love” myth. Spurred on by the devastation wrought by the pandemic—from the number of people who were furloughed, fired, or forced to take pay cuts, or double their workloads to the increased risks to one’s personal health—many are looking for change. While staffers are calling out the entrenched policies that perpetuate unfair working conditions, some leaders are looking for solutions, whether through elevated fundraising to help increase wages or forming unions to ensure employee protections. Working at film festivals and media nonprofits that showcase powerful pieces of cinema and nonfiction art may be a “dream job,” as one assistant programmer admits, “but they’re still jobs.”

Such internal conversations are also happening at the same time that producers and filmmakers are demanding more equity from film festivals, whether through revenue sharing, screening fees, speaking stipends, cash awards, or covering travel and lodging expenses. But festivals and media organizations must arguably get their own houses in order first.

Many of the problems at such organizations are baked into the very nature of their formation. Often led by a skeleton crew of full-time staffers, many festivals and exhibition spaces rely largely on a broader labor force of part-time workers who can be paid less and don’t receive health benefits or other worker protections.

“Our pay models are not sustainable, because of the nature of the contract work,” says Outfest’s new artistic director, Faridah Gbadamosi, who has worked for dozens of other festivals in various capacities over the years, from a venue manager to a volunteer coordinator to a programmer. Gbadamosi argues that nonprofits actually need to take a page from the corporate sector. “We need to start adopting corporate human resources practices, with clear job descriptions and limits on what people can do, and a clear understanding of working hours and tracking hours,” she says. In lieu of well-defined guidelines, festivals often appeal to a “familial” atmosphere that often blurs the boundaries between employer and employee, but as Gbadamosi says, “We don’t want your good feelings; we don’t want your pizza party."

Festivals and exhibition spaces are also “disproportionately reliant on volunteer labor, from screening committees to ticket checkers,” explains DocYard curator Abby Sun, who also worked as a programmer at the True/False and Hot Springs Film Festivals and is currently researching film festivals as part of her graduate work at MIT. “That just doesn’t apply in other media forums. Can you imagine a music festival run mostly by volunteers?” she continues. “Even DIY [music] shows typically split the door [revenue]with all their workers, and bartenders get tips, and nobody is paying film festival volunteers anything other than a ticket to a film or two, and a T-shirt.”

“We need to make sure leadership and their boards and funders understand this is a systemic problem, and come up with a baseline of regulations that are fair.”

Labor laws have approved the practice. A recent December 2021 appeals court ruling in California confirmed that people can readily volunteer for nonprofit organizations without receiving any forms of compensation. In the 2018 case, Woods v. American Film Institute, an AFI Film Festival volunteer sought compensation for unpaid wages and meal and rest breaks after working four 12- to 14-hour days, but the court rejected the claim on the basis that such a decision would have created “unforeseen and potentially devastating financial implications” for arts organizations.

Like film productions, film festivals are often concentrated, periodic events that take place over a few months, which may also allow them to be exempt from Fair Labor Standards Act protections such as federal minimum wage and overtime pay laws. In many cases, seasonal staffers—from travel coordinators to theater managers to print traffickers and box office staff—are hired just a month out from their start-dates. They drop into a city at the last minute, crash on a friend’s couch, work themselves to the bone, and then go onto the next event.

“The compressed timeline of festivals creates this cycle where it’s difficult to spread out the work and think more about long-term plans,” explains Sun, who doesn’t plan to return to the film festival world because of the time and financial pressures. During crunch time as a programmer, she recalls “watching eight features a day sometimes, which means you have to watch films while making dinner or out of the corner of your eye, or even two films at once, just to get all the way through the submissions pool.”

Many media nonprofits also struggle with simply staying in the black. As San Francisco International Film Festival Director of Programming Jessie Fairbanks says, “Something I wrestle with constantly is, How do you compensate people with competitive rates when you’re also working to keep the lights on?” Fairbanks, who previously worked at Hot Springs and DOC NYC, among other festivals, argues, “Like most systems right now, the entire festival model has to be completely restructured for nonprofits to have the kind of money and resources necessary to pay seasonal workers the wages they deserve and cover their travel and accommodation.”

Lela Meadow-Conner, executive director of the Film Festival Alliance and founder of Kansas-based mamafilm, believes conversations about labor need to be taken out of the anonymity of Instagram accounts and into board meetings. “We need to make sure leadership and their boards and funders understand this is a systemic problem, and come up with a baseline of regulations that are fair,” she says. But creating more equitable exhibition institutions will take investments; even Meadow-Conner admits that she currently can’t afford to pay herself.

In 2020, the Film Festival Alliance partnered with Chicago production company Full Spectrum Features to launch a Film Festival Leadership Lab to help instigate change at the top of organizations and “counteract some of the ingrained behavior” of the past, adds Barbara Twist, FFA Associate Director and Director of Partnerships at the Vidiots Foundation, an exhibition and community space in Los Angeles. “Our hope is to focus on national advocacy, and go to larger funding bodies such as the NEA to help the festivals understand that process,” she says.

As Twist moves forward with her mission to fundraise for a post-pandemic relaunch of Vidiots, she acknowledges that, unlike the scrappy DIY-run models of the past, the new organization will require “rules, structure and boundaries,” and perhaps most importantly, “we need to 100% fundraise more.”

When Samara Chadwick took over The Flaherty last year, she helped institute a transparent compensation scheme, with no reliance on free labor, minimum wages of $25/hour for all contractors, and paid time off and benefits for all employees. “As a result, I’ve been very frank with our funders,” she says. “I’m investing in building up the infrastructure of the organization. This is vital to our commitment to equity, to our ability to run our programs sustainably, and to pay our artists fairly.”

While change may be coming from the top at some organizations, it’s also being instigated from the workers themselves. In just the last couple of years, staffs at museums and arts institutions large and small around the country have pushed forward to unionize themselves, including the Anthology Film Archives, the Art Institute of Chicago, the Boston Museum of Fine Arts, Film at Lincoln Center, the Portland Museum of Art and the Whitney Museum of Art.

"There are ways to empower workers, forge solidarity, and support better labor practices by proposing alternatives to the abusive, coercive culture in which we came up."

“There’s this idea that unions are for people who work in factories and not for people who send emails, but the nature of the labor doesn’t matter,” says Dan Sullivan, a programmer at Film at Lincoln Center, and one of four members of the union’s bargaining committee. “If there’s a manager, you probably need a union.”

Union contract negotiations can take a long time and be contentious with boards and executive directors, but David Park, a part-time theater manager at Anthology Film Archives, claims it’s possible even at a small nonprofit. “Part of that process is being frank about the economics,” he says. “We would never bargain ourselves into bankruptcy, so there are a lot of things that can be done beyond wage increases.” Park cites such non-economic standards as equitable scheduling, nondiscrimination clauses, commitments to diversity and inclusion, protections for all staffers (from full-time workers to even back-up temporary personnel), and, given the ongoing evolution of COVID-19, a greater attention to healthcare.

Undoubtedly, the pandemic has been a main driver of shifts in America’s workforce, with Generation Z, in particular, proving themselves to be increasingly fed up with toxic or exploitative workplaces and quitting their jobs in record numbers. If film exhibition is going to survive, it will not only have to deal with a dangerous virus, but will also need to pay attention to new workers in more attentive ways.

As Samara Chadwick says, “One of the great costs of burnout culture is that it deprives the new generations of mentors. For the future of the field, let’s give the young folks who are taking these jobs the tools that we didn’t have to decipher the problems. There are ways to empower workers, forge solidarity, and support better labor practices by proposing alternatives to the abusive, coercive culture in which we came up. But the reality is, if we’ve participated in festivals in one way or another, we’ve all been all been complicit, and we need to actively work to acknowledge new ways of doing things.”