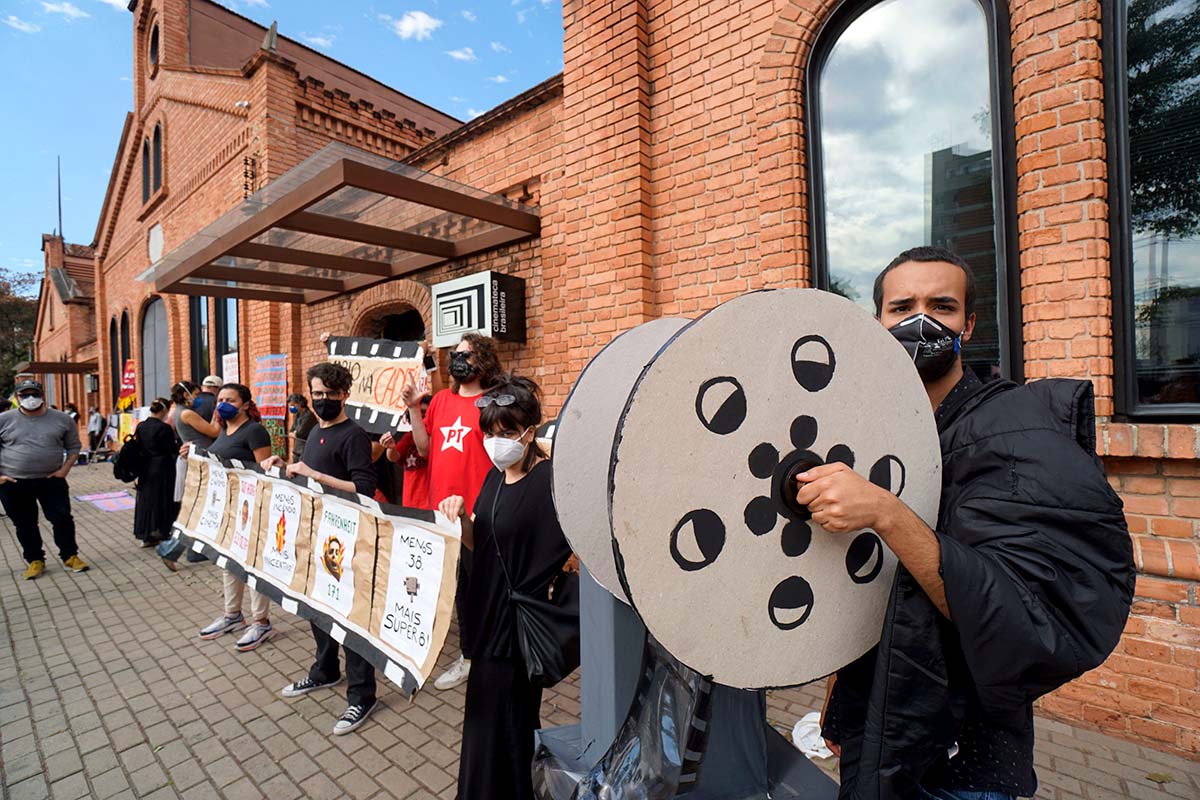 Since early 2020, the COVID pandemic has taken a merciless toll on film institutions and festivals around the world. But for Cinemateca Brasileira, aka the Brazilian Cinematheque, founded in 1940 and located in São Paulo, the crisis that ended with it shutting its doors in August 2020 had been nearly a decade in the making. The slow, agonizing burnout left the revered, beleaguered institution—including its workers—not only at the mercy of the faltering government’s response to longstanding economic downturn and the pandemic fallout, but also in the maelstrom of a highly politicized cultural war (as the country’s far-right government sought to limit civil liberties, the cultural sector became one of its main targets).

Cinemateca’s administrative woes, however, predate the current government. In 2013, the Minister of Culture, Marta Suplicy, dissolved its Counsel and fired its director, Carlos Magalhães. The organization subsequently passed from under the direct umbrella of the federal government to a private one. In 2018, this role fell to an education foundation, Associação de Comunicação Educativa Roquette Pinto (ACERP). The foundation received funds from the federal government to implement Cinemateca’s programs and to pay its workers.  According to Dora Mourão, the executive director of the Sociedade Amigos da Cinemateca (Society of the Friends of Cinematheque, aka SAC)—the organization that in 2021 took charge of Cinemateca’s emergency transition—ACERP lacked experience in the cultural field. As a result, Cinemateca’s new management wasn’t interested in a dialogue with associations like SAC that were closely linked to the institution’s history. Cinemateca’s budgets were slashed, and its programming suffered; it began to shed staff (from 140 workers at its apex to little over 60) and its laboratory—voted in 2011 by the International Federation of Film Archives (FIAF) in the top three of the most prestigious restoration labs in the world—stopped working. In late 2019, the government canceled ACERP’s contract, leaving Cinemateca’s workers in limbo.

Cinemateca’s workers nevertheless held out at the institution for months, despite not receiving pay. The subsequent standoff between Cinemateca and the government ended only in August 2020, when the workers, who had been occupying the institution’s main seat in Villa Clementino, in São Paulo, were forced out of the premises and the keys were handed over to the government representative, accompanied by federal police. The takeover revealed just how devastating it is for organizations to be stripped of key leadership that ensures the continuation of not just the physical space or the film materials but also the workers. Last year, when I interviewed Hernani Heffner, Brazil’s key voice in film preservation and the current director of the Cinemateca at the Museum of Modern Art Rio (MAM Rio), in Rio de Janeiro, he was adamant that no archive can survive without its staff. Heffner was also outspoken about how little support the area of film preservation receives in Brazil, in general—including from the Brazilian film industry. Many in the film industry, particularly the filmmakers, recognize the importance of having their copies deposited in an archive, yet preservation is too often an afterthought—a situation that is not unique to Brazil or Latin America. The daily manual maintenance of physical copies and the laborious cataloging carried out by specialized archivists often go unsung.

After being fired, the workers immediately began a collective effort to make their voices heard. They organized as Workers of Cinemateca (Trabalhadores da Cinemateca) and went on social media—primarily Facebook, Instagram and Twitter—to report on Cinemateca’s situation, using the hashtag #SOSCinematecaBrasileira. The Workers’ Instagram account, S.O.S. Cinemateca Brasileira, currently has over 13,000 followers. Meanwhile, the government got embroiled in a lawsuit with ACERP over the canceling of the contract, leaving the question of how and if the workers would be repaid for their back wages uncertain (this issue has not been resolved). In the interim, subsequent online conferences between the film sector and the government representatives appeared to lead nowhere. The Federal Public Ministry requested that a federal judge intervene on Cinemateca’s behalf, but the government let the deadline pass without taking action.

During the stalemate, the workers intensified their warnings on social media: that the institution’s dire abandonment made the threat to the physical archives real and imminent. Cinemateca had suffered four fires prior to its closing—in 1957, 1969, 1982 and 2016. Fires are often a concern for film institutions, particularly if highly flammable nitrate stock is being stored, and some of Cinemateca’s nitrate films had no digital backup. Recent fires at other prominent Brazilian institutions, such as the ones at the Casa da Língua Portuguesa in São Paulo, in 2015, and at the National Museum in Rio de Janeiro, in 2018, had served as a warning of just how massive the devastation can be. To make things worse, Cinemateca’s main film archive in Villa Clementino also suffered flooding, in February 2020—its technical workers were still assessing the damages when the government fired them.

Then on the evening of July 29, 2021, the disaster that workers had been warning about became a reality. A year into the institutional lockdown, during which only custodial functions such as cleaning and air conditioning had been continued,  Cinemateca’s massive storage warehouse in Villa Leopoldina caught fire. The blaze most likely resulted from an air-conditioning unit; the National Museum in Rio had burned in a similar way, from a spark. Among materials lost in the warehouse fire were secondary copies of films, four tons of documentation pertaining to Brazil’s film history, projectors and other equipment.

As Mourão stressed, the fire, which so many in the film industry called “a tragedy foretold,” mobilized wider sectors of Brazilian society for Cinemateca’s cause. The reporting of its plight had been previously limited to mostly trade magazines, and letters of support had come mainly from international preservation societies. But the images and details of the blaze’s massive reach and of the shocking aftermath—the immense blaze, the cindered warehouse, molten film cans—were widely disseminated by the national and international media. The Workers of Cinemateca once again played a fundamental role, raising awareness and helping to stir public outrage. When writing my reports on the fire, I received crucial information, updates and images of the damage inside the warehouse from the collective.

The government, which had previously agreed to open a public bid for the new management of Cinemateca, took action—it called the bid on July 30, 2021, two days after the fire. SAC participated and won the contract for interim leadership.

In my phone call with Mourão, she confirmed that 20 of Cinemateca’s workers had been rehired in November 2021. One of SAC’s immediate challenges was that some of Cinemateca’s technical workers, left without financial resources in the midst of the pandemic, had sought work elsewhere. The Vale Cultural Institute provided emergency funding for the staff to go in and start evaluating the damage from the fire. The 20 workers have since been investigating the state of the archives manually, can by can. Mourão confirmed that thanks to the principal fridge working properly, no nitrate film stock had been lost, though the damage discovered so far includes fungus.

The 2021 emergency funds of 7 million reais (roughly 1.2 million US dollars) paid for the salaries of the rehired workers. Cinemateca also entered a frantic planning stage. Under SAC’s guidance, it needed the approval of its new institutional status, signed by President Bolsonaro, in order to receive funds. As 2021 drew to a close, the status was approved, a new counsel was formed, and funds were deposited.

Cinemateca continues to face dire challenges. It entered 2022 with a 14-million reais budget, of which about 40% must be raised through private donations and incentive programs. One such incentive program, Lei Rouanet, will allow for the digitizing of the nitrate stock over the next three years. But as Mourão stressed, 14 million is not a sustainable budget. An institution of Cinemateca’s stature needs 20 to 30 million to operate. The future administration, approved by the counsel, therefore faces some difficult questions. How many more workers will it be able to rehire? What programming can it implement, in addition to emergency evaluations? Given that, as Mourão stressed, Cinemateca has historically been the place where new archivists learn the craft, what is the hope for renovating Brazil’s conservation practice?

Mourão is realistic about the many issues that await Cinemateca in 2022, an election year in Brazil. This is crucial, since much of SAC’s early efforts revolved around isolating and protecting Cinemateca from the fallout of political tensions. Mourão mentioned in our conversation that while there is no Ministry of Culture—Bolsonaro dissolved it in 2019, and it was absorbed into the Ministry of Tourism, of which the National Audiovisual Secretariat is part—the government officials’ goodwill was nevertheless fundamental in getting the institution back on its feet. The Adjunct Secretary of Culture, Hélio Ferraz, in particular, acted as a facilitator in helping SAC win the emergency contract, in governmental approvals and expedited fund transfers.

Still, there’s good reason to be jittery. 2022 will be a highly polarized election year, and Cinemateca continues to be vulnerable to political attacks. While Mourão is optimistic that the institution might open its doors to the public as early as May 2022, and perhaps open its library before then, while it also starts to answer the pent-up demand for footage from filmmakers, there’s no doubt that the limited budget will present a grave challenge.

“We will go on,” Mourão nevertheless told me. Indeed, the latest Instagram post from the workers shows the staff posing in masks in front of the institution’s main seat—the same setting where they had been previously picketing, demanding to remain open, and then after the lockdown and the fire, calling on the government to take action. The image, taken from FIAF’s online bulletin, boasts a heading that reads, “A New Start for the Cinemateca Brasileira.”

Ela Bittencourt is a writer and critic currently based in São Paulo. She contributes to various international publications, including Artforum, Film Comment, Frieze Magazine, Hyperallergic and Sight & Sound.

END_OF_DOCUMENT_TOKEN_TO_BE_REPLACED

'The Edge of Democracy' Tracks Brazil's Slide to Fascism

Elegies and Excavations: Reassessing the Past at Brazil's It's All True Documentary Festival