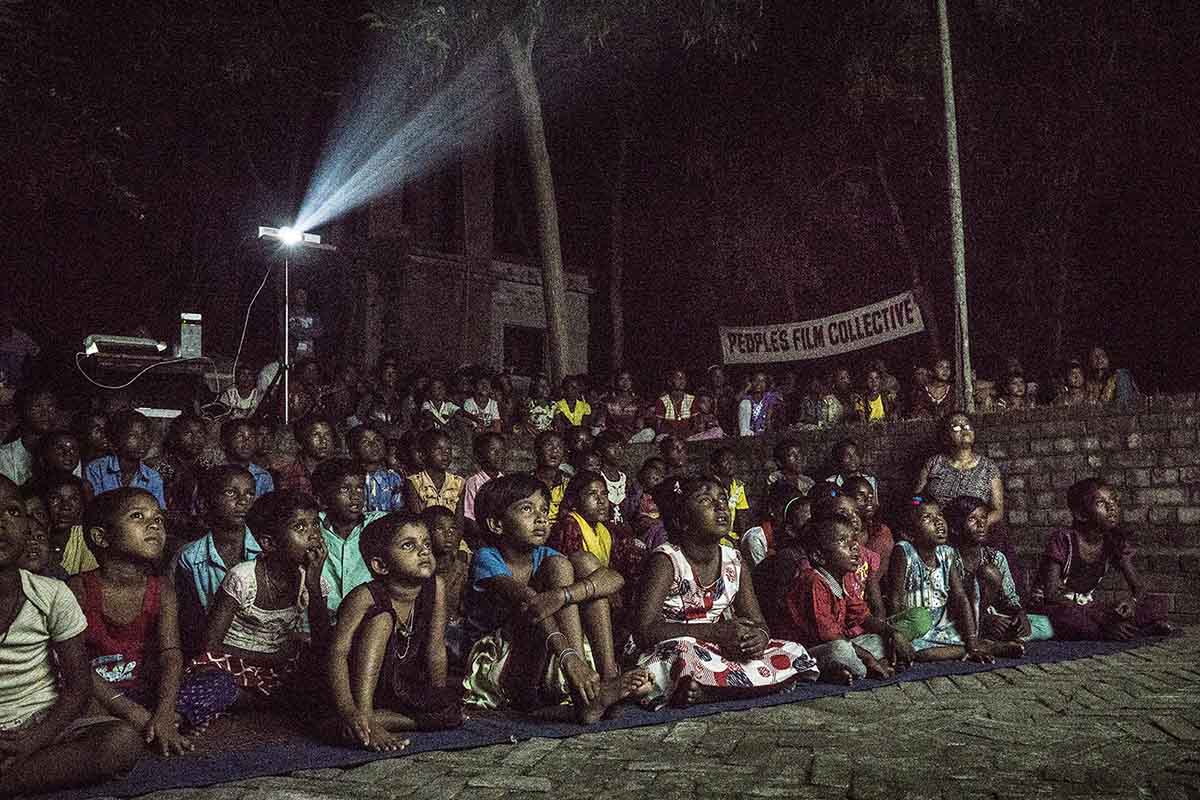 "My name is Ayudh Chatterjee, and I’m slightly unwell, sorry," coughs a little boy bundled up in a sweater and scarf. "But in this movie, the teacher insists that two and two equals five. Is this right?" "No!" shouts the indignant audience. "Then the cruel teacher forces the student to agree, brings three bullies to force him, but he refuses, he keeps rebelling. They kill him! Despite this, that other boy, even though he says 'five' out loud, he writes '4' in his notebook. That is right!" He hands the mic back. He gets a round of wild applause.

In Ariadaha, in the northern suburbs of Kolkata, the People’s Film Collective (PFC) has just screened Two & Two, Babak Anvari’s Orwellian allegory of fascism and doublethink. The audience is mostly kids, ages five to 15. Ayudh is one of many children who will be encouraged to voice their forceful opinions after a screening; they will be given stationery so they can reflect and write letters to the PFC later; some will even draw their impressions on art paper.

Welcome to a typical evening of the traveling movie theater—for children and young adults, but all are welcome—that is Little Cinema. Although typical might be stretching it. "The Little Cinema screenings are mind-boggling," says Paroma, who has organized them for the PFC for five years. "You have all these kids running around, it’s an environment in constant flux. Kids will wander off, or they’ll lie down in front of the screen." Once, after watching Norman MacLaren’s anti-war short Neighbours in Jorasanko—the famous neighborhood in north Kolkata where the Nobel Laureate and cultural icon Rabindranath Tagore was born—children started talking about the fights they’d witnessed in their own slums, which led to a geopolitical discussion on India-Pakistan border issues. "It’s quite a challenge; children are unpredictable and will say what they think. Which is why I love it so much."

Naihati, a once-flourishing working-class town about 30 miles north of Kolkata, is now riven with urban decay, defunct mills and derelict factories. One day in 2013, outside the old Gouripore Jute Mill union office, a makeshift screen on a bamboo frame played Anand Patwardhan’s Occupation: Millworker, a documentary on textile workers who, after a four-year lockout in the 1990s, forcibly occupied the New Great Eastern Mill in Mumbai.

That was the PFC’s first screening. The audience was composed of retrenched workers and their families, most of whom, locked out of the mills, were fighting for their stolen provident funds and gratuity dues. The screenings and conversations pulsated with "the energy of instant bonding over a common class identity forged between jute mill workers in Bengal and cotton mill workers in Bombay who fought the same fight in an earlier time," PFC’s co-founders Kasturi Basu and Dwaipayan Banerjee wrote in Towards a People’s Cinema, a collection of essays and interviews they edited on the independent documentary in India. After that electric evening, PFC began a monthly series of "Screenings and Conversations" at a mime academy in Kolkata, in which documentary viewings were bookended by interactions with filmmakers, activists and academics. The next year, they organized the Kolkata People’s Film Festival of new and rarely-seen independent documentaries in association with the Cinema of Resistance, a collective that has, since 2006, hosted the Gorakhpur Film Festival to counter the prevailing far-right ethos in the city of Gorakhpur in Uttar Pradesh, India’s most populous state. Little Cinema began soon after; going to schools, orphanages, slums and playgrounds all over the state of West Bengal. The settings are often dramatic—they once screened beside train tracks on the Sealdah-Canning line, in Bidyadharpur, a census town of less than 5,000 people just south of Kolkata.

The collective also publishes, in Bangla and with a print run of 800, what is possibly the only annual magazine on documentary and political cinema in India—Protirodher Cinema (Cinema of Resistance).

"A film is born when it is viewed," Basu and Banerjee maintain. "How you show a film is as important as what you show." In addition to their regular events, PFC also organizes one-off screenings in improbable locales, from congested crossroads to protest sites. This can be hard work—they often have to use "live subtitles" or "para-dubbing" for films without subtitles, in local languages, or for audiences who cannot read. Sometimes, they need to replay scenes if the audience has trouble overcoming cultural barriers. During massive protests in 2020 against the Indian government’s discriminatory citizenship laws, the collective showed several documentaries and shorts at a huge open-air sit-in in the heart of the city. For about four hours, hundreds of protesters, mostly Muslim women and their children, watched and discussed films like A Tribute to Shaheen Bagh, Memoirs of Saira and Salim, and Vivek (Reason). Ten days later, the government imposed a draconian COVID lockdown—at four hours’ notice—and the protestors were forced to disperse.

In India, documentary cinema began as colonial propaganda in 1940 under the Film Advisory Board, which morphed into the Films Division (FD) soon after independence. Ever since, the FD has produced newsreels and state-funded documentaries and acted as the official repository of the moving image. Most documentaries critical of the Indian state, therefore, have had to operate outside its ambit. Concurrently, the overwhelming dominance of Bollywood has tended to crowd non-commercial cinema out of the market.

This led, in the 1950s, to the rise of a so-called "parallel cinema"—the Indian New Wave— activated by auteurs like Satyajit Ray and amplified in the succeeding decades by a new breed of filmmakers from all over the country—Shyam Benegal, Adoor Gopalakrishnan, Mani Kaul, Saeed Mirza, and many more. But the neoliberalisation of the Indian economy in the early ’90s and a further consolidation of market forces around big-budget blockbusters and the "formula film" led to the gradual decline of parallel cinema, and the documentary became its biggest casualty. This has had an unintended consequence: because it operates outside the market and the state, "The documentary in India is in some senses unique," Banerjee maintains. "It is the independent documentary—rather than fiction film—that has emerged as a space of experimentation."

"Ours is a political space for cinema that encourages collective viewing," Banerjee continues, "and it is not commercially mediated." The collective is entirely crowdfunded, does not accept government, corporate or NGO sponsorship, and maintains an anti-business model: All screenings are free, and viewers pay what they like. Submissions to the film festival (now entering its ninth year) are also free—over 3,500 documentary submissions were received for this year’s festival—and films were selected based on area of production and topicality. "No awards are given out," Basu says, "because awards create hierarchies and competition, and change the dynamics of a festival." The KPFF has created a distinctive audience that includes some of the finest documentarians in the region.

The independent documentary space is now under systemic threat from the ethnonationalist Bharatiya Janata Party. In power since 2014, the BJP has mounted a frontal assault on memory and the national narrative. A recent Ministry of Information and Broadcasting order mandates the merger of the Films Division, the National Film Archive of India, the Children’s Film Society of India, and the Directorate of Film Festivals, with the National Film Development Corporation (NFDC), a commercial entity meant to generate a profit for the government. There is now uncertainty about the future accessibility, or even continued existence, of the FD’s audio-visual archive of independent India. "They may well want to delete these films," Basu believes, "since the present government has an open disposition towards erasing history."

Last year, the government abolished the Film Certificate Appellate Tribunal, the specialized court of redressal for filmmakers who disagree with the Central Film Certification Board’s (CBFC) certifications. This was but a prelude to proposing an amendment to the Cinematograph Act of 1952 to give the central government broad "revisional powers" of retroactive film certification. If passed, this would allow the government to change, at any later date, the existing certification for any film released in India. While this will obviously affect mainstream cinema, it might hurt independent documentaries even more. "Fewer documentary films seek certification due to a cumbersome certification process and therefore fewer films are screened theatrically," says Shweta Kishore, Lecturer in Screen and Media at the Royal Melbourne Institute of Technology and author of Indian Documentary Film and Filmmakers. "With revisionary powers, it is these handful of 'visible' films that would be at risk, diminishing the presence of documentary films that theater-going audiences can access, and therefore their discursive potential in the public realm. " "Very few documentaries find theatrical distribution in India," Biaas Sanyal, a former NFDC employee, affirms.

Documentaries critical of state power that have managed a theatrical release "have done so after protracted litigation with the CBFC," Kishore adds. "Arguably, these films present a threat to official narratives, and their visibility in the public domain—although relatively minor compared to mainstream cinema—is greatly significant for the representation of counternarratives." "The government is aware of the afterlife of the independent documentary," Basu and Banerjee say, "so they keep trying to censor these films." This is why the PFC performs a vital function in West Bengal. "The most significant contribution of collectives like the PFC," Shweta Kishore concludes, "is the construction of a participatory approach to cultural exhibition that acts to collapse the zone between industry and audiences, allowing ordinary people to take an active role in the construction of culture." Shreyatama, a queer feminist filmmaker working with the collective since 2017, admits the pandemic has hit them hard—they get most of their funds at physical events, from donations and magazine sales. But even harder hit is an audience that wants to collaborate in creating the cultural politics of the everyday. "We’ve been getting calls from regular attendees," Basu laughs. "Ki byapar? What’s the matter? Kobe shuru hobe? When will you start screening again?"

"Because the documentary—including the state-produced documentary—exists at the edge of culture," filmmaker Avijit Mukul Kishore recently wrote in his Scroll article, "Why Films Division matters: It’s the largest moving-image repository of Indian history," "that edge must be protected." The closing film at that screening by those train tracks in Bidyadharpur was K.P. Sasi’s music video for Gaon Chodab Nahin (We Will Not Leave Our Village), about the Indigenous struggle against bauxite mining in the eastern Indian state of Odisha. By the end, dozens of local children, their mothers, and their grandmothers, had burst into song—"We will not leave our village/We will not quit our land/We will not give up our fight."

Sudipto Sanyal is a recovering academic who has lived long and hard in the disgusting and magical city of Kolkata. His writing has appeared in, among others, The Economist, PopMatters, Mekong Review and The Indian Express. He hosts a midnight show called Songs of Comfort for Hypochondriacs and Panicking Lovers, on Radio Quarantine Kolkata.

END_OF_DOCUMENT_TOKEN_TO_BE_REPLACED

Courage Under Fire Award: 'Writing With Fire' Team on Finding Hope in the Unlikeliest Place