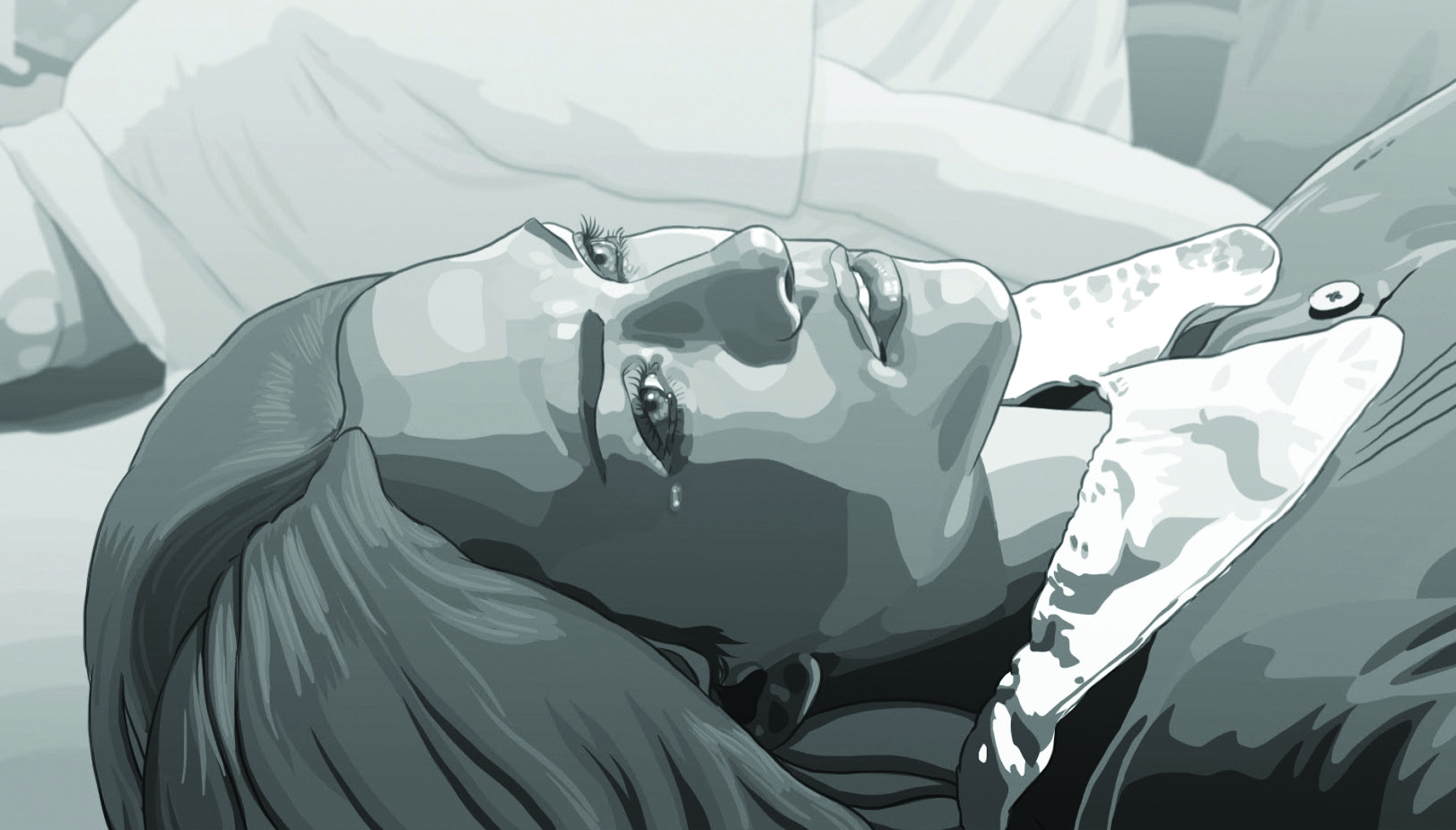 Animation's history within the realm of documentary is a long and storied one, but to this day its origin is still a matter of contention. Although Winsor McCay's 1918 hand-drawn short, The Sinking of the Lusitania, is often cited as the first example of animation being used for documentary purposes, it could be argued that Eadweard Muybridge's use of stop-motion photography in 1877 to document The Horse in Motion not only heralded the birth of the motion picture, but was also the first instance of using cameras for motion capture, and a harbinger of the animation process to come. Any reader whose curiosity is piqued may find The Emperor of Time of interest, a short film about the peculiar details of Muybridge's life by the animator and experimental filmmaker Drew Christie. Christie was one of the animators hired by filmmaker Penny Lane for her animated documentary NUTS!.

At first glance, animation and documentary appear to be two separate media located at opposite ends of the spectrometer, the latter defined by its dutiful recording and transmission of actual events, the former perceived as a gateway into the imagination. Both of these disciplines display information through images and sound, but the differences between their very natures calls to mind the age-old argument of objective versus subjective reality. However, as Beige Adams points out in her Spring 2009 Documentary article "When Docs Get Graphic: Animation Meets Actuality," the myth of objectivity within any documentary work was shattered long ago.

Animation's technology was slow in its advancement from hand-drawn images and stop-motion manipulation of objects to the advent of computer animation and visual effects that dominate the motion picture industry today, but the analog version of rotoscoping—animation that is drawn or painted over an existing photographic image— was actually patented all the way back in 1917 by animation pioneer Max Fleischer, creator of Betty Boop, Koko the Clown and the early Superman cartoons. Fleischer's process involved projecting individual frames of a filmed sequence onto the underside of a glass panel, which then enabled an animator to create each drawing, using the illuminated image as a guide.

A modern version of Fleischer's process can be seen in Keith Maitland's 2016 documentary, Tower, about the shootings at the University of Texas, Austin on August 1, 1966. Tower is Maitland's second animated documentary. His decision to rotoscope his first, The Eyes of Me (2005), a doc about youths who have lost their sight, was inspired by Richard Linklater's Waking Life (2001), which was animated using Bob Sabiston's custom-built Rotoshop, a computer-based rotoscoping program that blends key-framed vector shapes through a hierarchy of layers.

"I just love the process of [rotoscoping]," says Maitland. "It was exciting to be able to manipulate the footage in that way and to creatively think about multiple planes of existence. With The Eyes of Me, we were presenting an internal process about vision, and I was interested in exploring questions of perception because all four of the kids in the doc had sight and lost it during their teenage years, and they speak very directly about what that vision loss felt like—not just emotionally, but from a question of how they perceived the world and how they put together the environment around them based on everything except vision."

For Tower, Maitland's director of animation, Craig Matthew Staggs, and his team at Minnow Mountain, used TVPaint, a French, Mac-based software for the doc's rotoscoping process. But before bringing the animators on board, Maitland, fellow producer Megan Gillbride and cinematographer Sarah Wilson interviewed eyewitnesses and survivors in standard documentary fashion. Those stories were then transcribed and cross-referenced with archival news reports to create a script for a dramatic retelling of the day's events.

"We transcribed about 20 interviews," Maitland says, "and from those interviews, we boiled it down to eight main characters. And because they're eight interwoven stories, I basically scripted eight short films about the experience of that day. And this just describes the first hour of the movie, since the last half-hour is more of a standard documentary approach."

Not having permission to film on campus, Maitland and his team turned to the iPhone 6 to record reference videos and photos of the background locations and buildings that appear in the film. "Because we were rotoscoping it," he explains, "the animation is an additive layer, which means we could film anywhere as long as the spatial relationships made sense, so the overall majority of the movie was actually filmed in my backyard. There's a 40-foot palm tree in the corner of my yard that stood in for the tower for eye-line purposes. As for the inside of the tower, I went to the university and took lots of photos of its stairway on a tour, but I knew we weren't going to be able to stage the actual scene there. So, we went around Austin looking for a matching stairway and found an almost perfect fit in an arts complex where some filmmakers work, just about six blocks from my house."

There is a moment in Tower when the rotoscoped actress (Violett Beane) portraying a young Claire Wilson from 1966 disappears and in her place is Claire herself, staring back at the viewer as she looks in the present day. It is a chilling moment, as the realization hits that the story being witnessed actually happened to real people—a fact that is known on a conscious level, but which does not truly hit home until the artifice of the animation is stripped away. And, truth be told, if Maitland and his animators over at Minnow Mountain had not expended the time and effort to rotoscope their documentary (effectively removing the taint that typically accompanies dramatic reenactments), the story being told would not have been as compelling or engaging. As Maitland puts it, "If we're doing our job right, a week after people see the film, they don't remember if key moments happened in archival footage or in animation. Here's the thing about the animation, and this is probably the most important point to me: it is a storytelling tool, and it is not the point of the film. It's not what the film is about any more than whether we use a wide-angle lens or a long lens or shoot in slow motion or any other technical decision. It's an aesthetic choice that is designed to communicate, and I'm not a big animation head by any stretch. I just really appreciate the opportunity to perceive the human experience through a different lens." 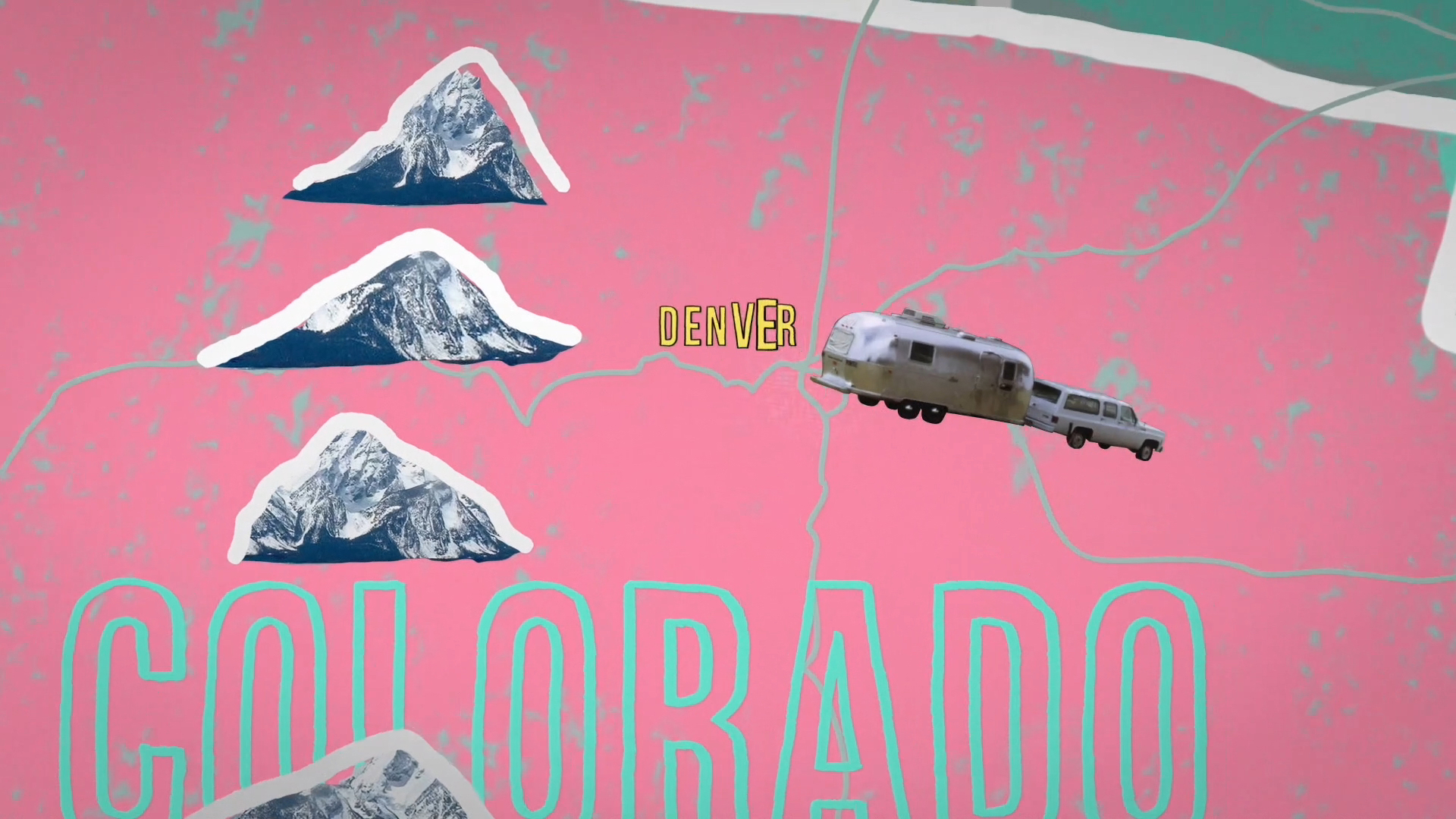 The use of animation in documentary was for pragmatic purposes at first, being utilized when source material or archival footage was scarce, as was the case with McCay's The Sinking of the Lusitania. But nowadays, with a plethora of motion graphics being used for titles and interstitials, it has become an expected element within the documentary form. As Syd Garon, co-founder of Mindbomb Films, points out, "There seems to be so much animation and motion graphics in documentaries these days that people just accept it."

When asked if there was a difference between animation and motion graphics, Garon replies, "Animation and motion graphics are two terms that get thrown around a lot. Commercial animation often gets called motion design, which tends to be more graphic design-orientated—moving type and the like—while animation itself is a term usually applied to classic cel or moving cartoon images. They all ooze into each other, but the umbrella term would be animation."

Mindbomb is known for their animation, motion titles and interstitials for such documentaries as Blackfish, Weiner and Jodorowsky's Dune, among others. Differentiating the various types of animation technology used by MindBomb Films for its various clients, co-founder Chris Kirk explains, "We have a team of ninja specialists that are good in a variety of disciplines, whether it's 3-D, classic cel animation, Toon Boom, After Effects or putting together boards. It just depends on what the client needs or the stage of the job we're on. If we're putting together a look for a movie, boards are needed, and we'll deal with one of our print people. As the job moves further down the line, that may get pushed out to somebody who is more of an animation person. We'll figure out if that person needs to be more of a 2-D or After Effects person, or have 3-D chops. We may need to bring in a cel animator if we have a character walking or doing a repetitive motion. We function like an adhocracy at Mind Bomb—our artists are freelancers, but we keep them busy all the time." 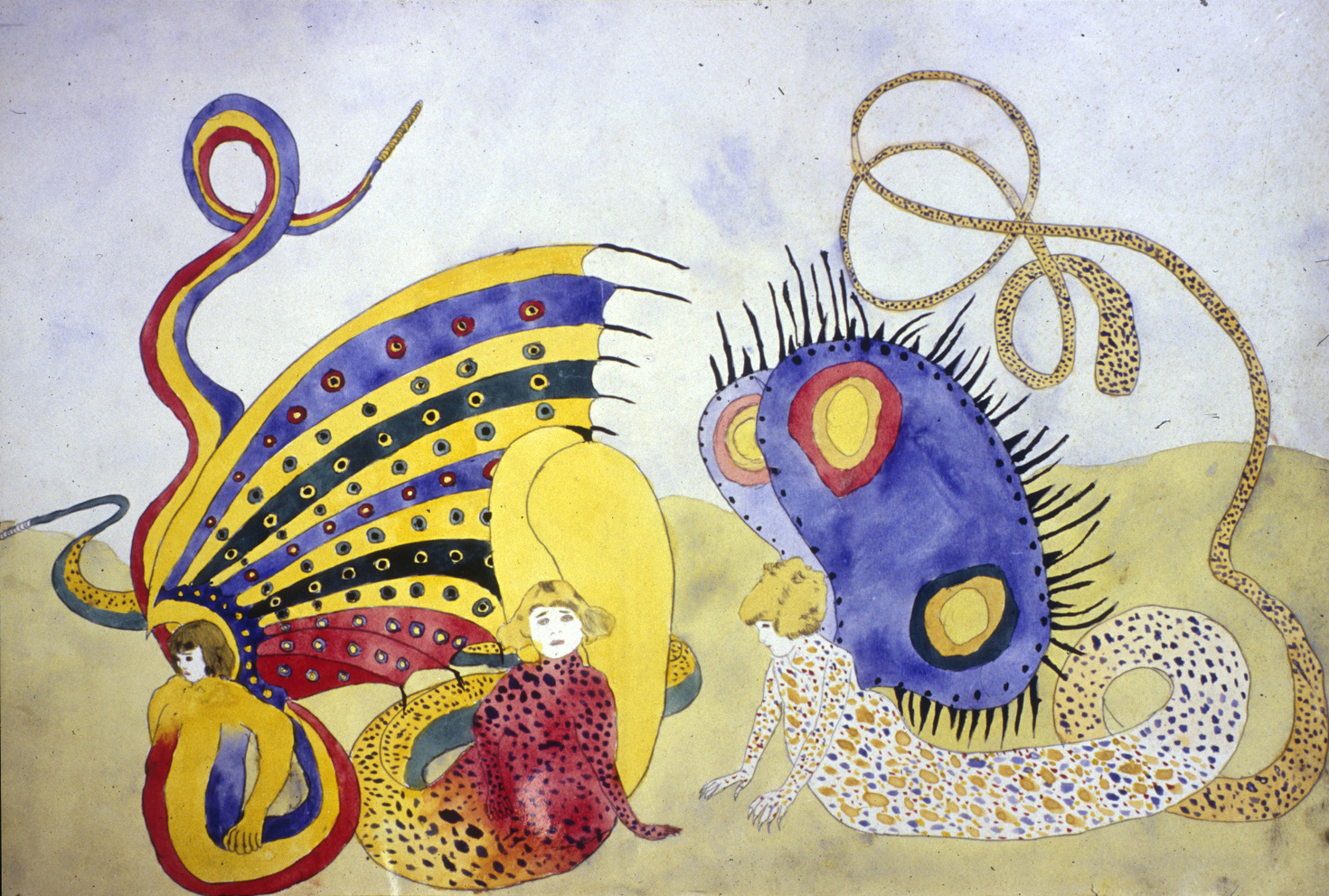 Regardless of the technology being utilized—hand-painted cels, rotoscoped images, computer-generated graphics in 2d or 3d, stop-motion photography— animation's use in documentary seems to have found its strength when called upon to help tell particular aspects of a unique story, especially one that emulates the style and tone of an individual artist's body of work, as is the case with Jessica Yu's feature documentary about outsider artist Henry Darger, In The Realms of the Unreal (2004). The obsessive nature and bizarre details of Darger's life and artwork were a huge part of the documentary, and a team of animators, led by animation producer Kara Vallow, adhered to a strict design dogma to use only those elements found within Darger's artwork. Looking back, Yu gave a brief overview of their production process in a recent email from Mozambique:

"We worked with a team of seven animators. Each one had his (and, yes, they were all male) own work process. There was some storyboarding. Sometime I would draw very poor and rudimentary sketches to indicate how I thought the animation could 'move' across/into the paintings, and I supplied notes on what elements could be set into motion to tell the story, and as much of a script or voiceover track as was available. Some animators were heavy into Flash; others had programs for specific effects. But this was a long time ago, and my memory of the other software is basically gone."

She adds, "Some animators liked to check in regularly with their progress, others (like Brett Ehringer) preferred to show the whole eye-popping shebang when he was pretty much done with it. Andrew Brandou was amazing—he had a talent for making the paintings feel three-dimensional. And Dave Wigforss really sweated the hundreds of soldier figures in the battle scenes. Lots of layering work done by all, using the figurative elements of the paintings to create 'puppet' pieces that could be manipulated and maintain the collage-like quality of the original paintings."

In conclusion, she writes, "It was a very fun process, and one for which I retain much gratitude for the animators, as we had very little money."

"The use of animation was the thing that afforded a tremendous amount of creativity and creative problem-solving for our project," says Maitland. "For example, the badges and shoulder patches of the Austin Police Force looked very different than what they are now. So I gave reference photos to one of my interns, who recreated them in Photoshop, and we printed them out and glued them to the shirts the actors were wearing. And they were just scratching their heads when they saw the wardrobe they were supposed to wear because, literally, it just looked silly with the paper badges and patches. But at the end, with the animation, all is well."

END_OF_DOCUMENT_TOKEN_TO_BE_REPLACED

Doc U: The Total Picture - Using Graphics to Tell Your Story