SVOD in Europe, COVID and Post-COVID 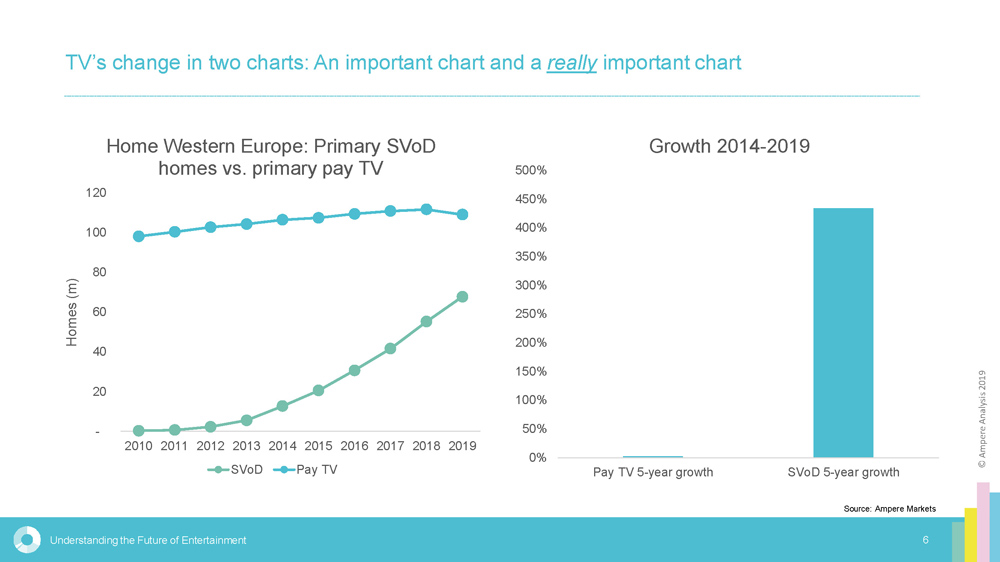 How important is streaming media to documentarians in Europe? Really important. At the International Documentary Festival at Amsterdam (IDFA) last November, Guy Bisson from Ampere Analysis, a leading consultancy on video, explained why. In March, we followed up on the implications of Covid-19 for the marketplace.

Streaming media is still only 10 percent of the European market, but over the last five years, pay TV—still the leader—has basically had flat growth. Meanwhile, streaming media has grown more than 400 % and shows no sign of stopping. In fact, streaming consumption is way up, with so many people quarantined.

And that news could be good for documentarians. Documentaries are doing well world-wide on streaming—globally, 8% of Netflix’s holdings are documentaries. Documentaries can be cheap to acquire and commission by comparison with fiction as well. Acquisition is still the default, but original content is growing. Currently both broadcasters and streamers are putting almost a third of their original-programming dollars toward documentary. The hottest areas are nature, history, art and culture, crime and politics.

Bisson foresees more people turning to documentaries, during the health crisis. “I’d expect a growing interest in science and medical factual content and platforms looking back in the archive/catalogue for relevant content [(increasingly so, depending on the duration of the new production hiatus]),” he saidnotes in a follow-up email as the pandemic was taking its global toll. “I think other factual areas that could see an increased interest as we move further into the crisis are genres like travel and themes around conquering adversity.” 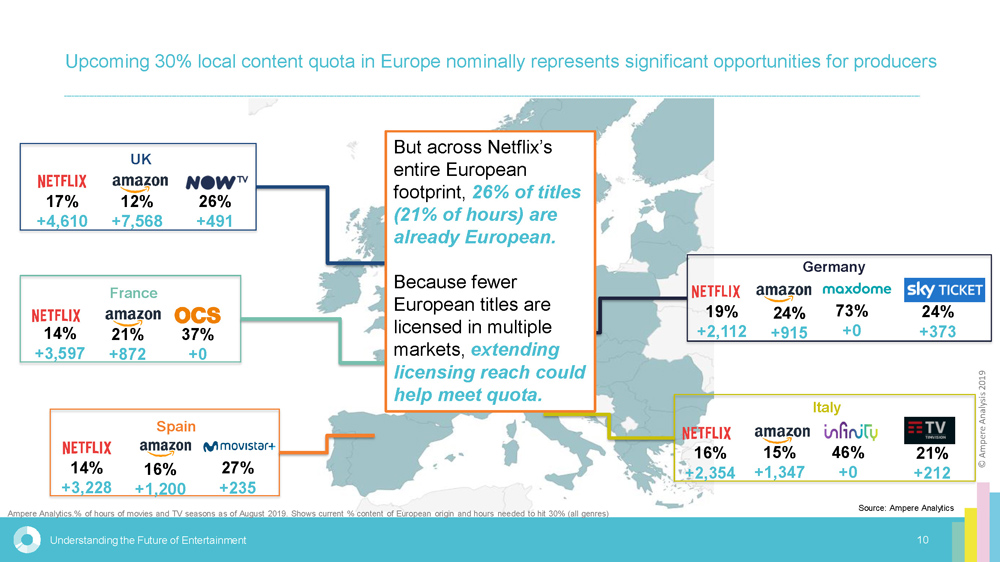 The world of streaming is growing, as content companies also get into streaming, cutting out middlemen like Netflix and Amazon—which are also becoming content companies. Between Disney+, HBO Max, Peacock (that’s NBC Universal), and Apple TV+, suddenly the field is more complex than ever before. The good news for documentarians is that Netflix and Amazon are losing content to the newcomers. Netflix may find that a fifth of its holdings could be taken back by direct streamers, for instance, although most of that is not documentary. So the veteran streamers will be acquiring more work to fill that hole, and commissioning more original work. In Europe, national streamers such as Germany’s MaxDome and Scandinavia’s Viaplay also offer places to look at for acquisition or, eventually, commissioning. And advertising is creeping back in, everywhere but Netflix, which is doing just fine with massive amounts of product placement.

Bisson thinks it likely that the current dip in production will be followed by a rush of product once the crisis lifts. “For those able to resume after the crisis, demand for newly produced content should be very strong,” he saidpredicts. One longer-range trend, as well, he thinks, is that the current rush of consumers to online platforms will continue. And that will mean that “the power balance in buyers and commissioners of content will also accelerate towards some of the newer players.” However, he notes, there are a lot of unknowns at the moment.

European documentarians looking for deals with streamers have regulation going for them. Soon, streaming services in the E.U. will have to carry 30 % European content. Netflix, at least, is reasonably close to that requirement,  (which is 21% of hours and 26% of titles). (However, the titles could be fiction or And there’s no requirement that the content be documentaries.) Although streamers may be able to extend current licenses that are only for some parts of Europe to all of Europe and make up some of the difference, they’ll probably still have to acquire or commission more European content. And some of it will be documentary. That’s good news, but it’s incremental good news, not a game changer. 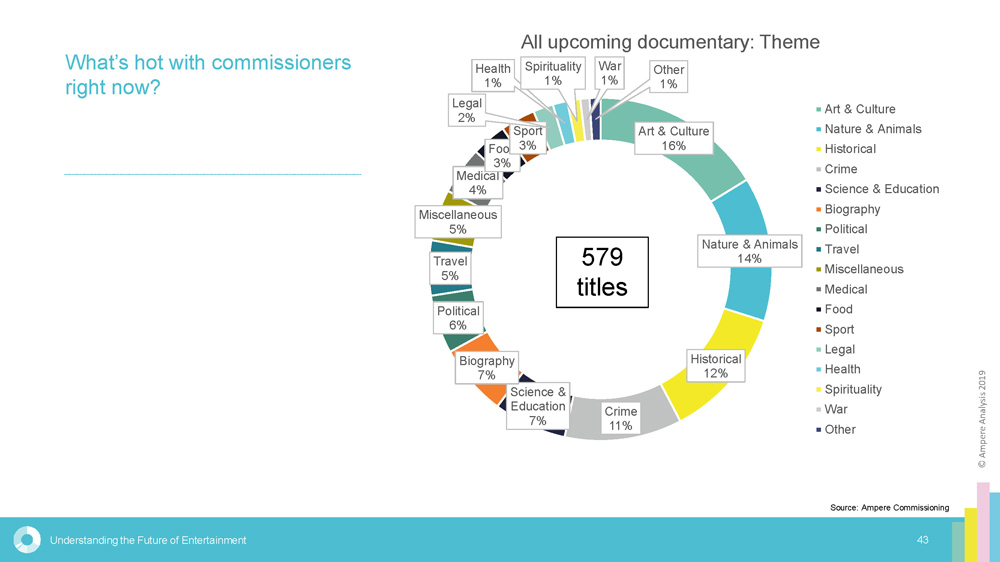 Other marketplace trends also favor documentaries on streaming media. For instance, the biggest growth in customers is coming from over-45 year-olds, and that’s good for documentary. Those older viewers are more likely to want to watch documentary, news and current affairs. Two hot categories for commissioned work—sports and crime—are good news for documentarians.

But can non-US producers really compete with Americans on global platforms like Netflix? Well, currently more than half (51%) of Netflix’s original production is non-US. This is a big deal. Among documentaries, 43% are non-US. And the trend is toward internationalization. Netflix is investing in original productions, where it believes it can get more subscribers than it has. Right now, that means Australia and Germany, so expect them to sink some money into original productions there. Netflix also invests in originals in the Spanish language, which can travel to many regions. And who knows about Turkey, Poland, Chile, Russia? They’re all pretty much untapped markets so far. Oh, and apparently people, even in the notoriously resistant U.S.,  are getting used to reading subtitles. 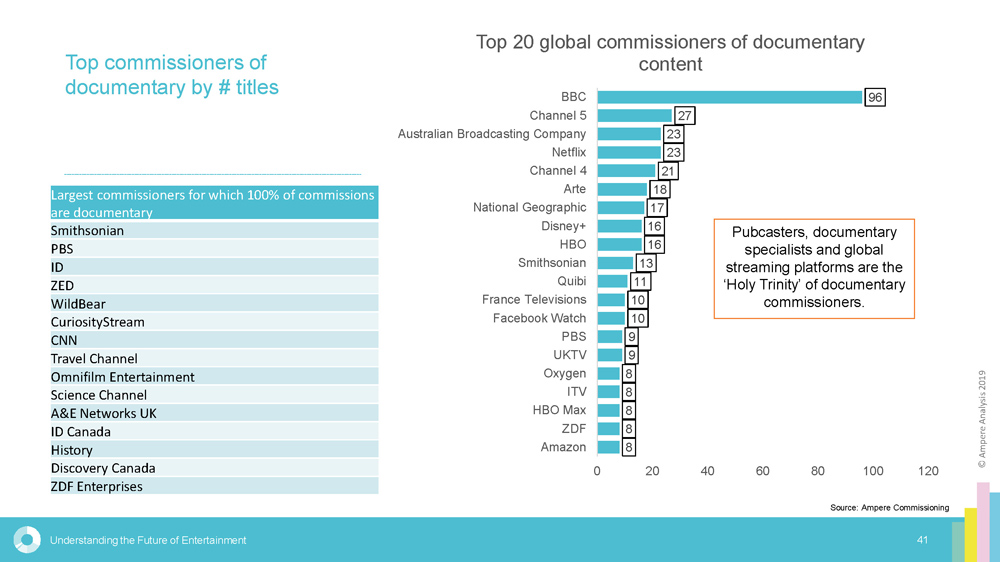 At the same time, let’s not forget the importance of broadcasters, especially European broadcasters and public broadcasters generally. They’re still the big producers of documentary, and streamers depend on them for acquisition.

Indeed, broadcasting is still a great place to get a commission for work, and to build a brand or recognition because of its huge audience reach.

Do we still care about piracy? Less and less. It’s never going away, but outside of large state actors (hello, Russia and China!), we’re talking about lower-income guys who target sci-fi and action films (and likely wouldn’t pay for it anyway, so they and thus aren’t stiffing anyone out of a payment). The more ad-supported streaming we get, the less siphoning we’ll see.

And as usual, if you’re in a weird little niche market—small-plane aviation, royal TV—the rules don’t even apply to you. You know your people, and can find them.

How does Bisson know all this? Ampere draws on two deep databases. First, Ampere does a consumer survey twice a year in 22 countries. Second, it tracks streaming content title by title, inferring content categories and licensing strategies from what can be known publicly. Then it slices and dices the data, and voila.

END_OF_DOCUMENT_TOKEN_TO_BE_REPLACED

The VOD Effect on Distribution: A Nordic-European View

Jihlava Film Festival at 25: A Conversation with Director Marek Hovorka