Andrea Arnold's 'Cow': The Searing Romance and Reality of Nature 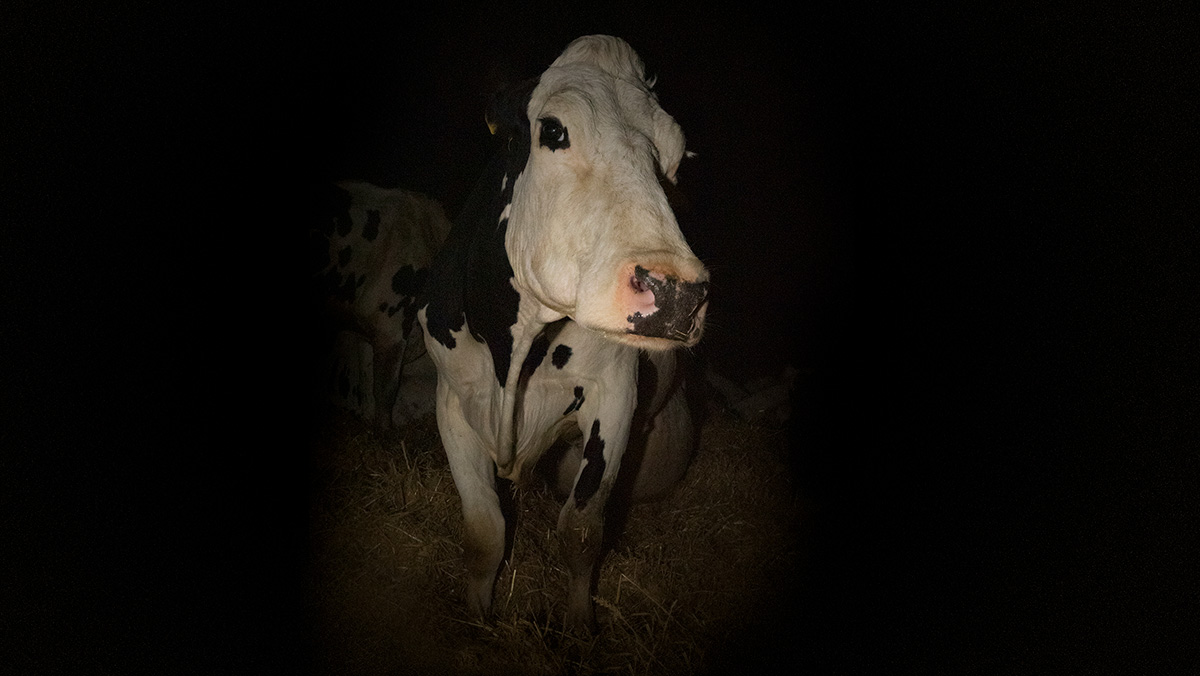 Cow opens with its protagonist, Luma, mid-labor in a cattle barn where she delivers her newborn calf, Malu. The audience observes the beauty of childbirth, and the tender moment of grooming her glistening babe clean that follows. Then, the scene quickly takes a sinister and heartbreaking turn, as Malu is whisked away to a separate section of the farm in a nearly mute scene.

Cow is director Andrea Arnolds’ first feature documentary. Most notably known for narrative films such as Red Road, Fish Tank, and the narrative short Wasp, for which she won an Academy Award, Arnold worked on Cow intermittently for four years, while directing the second season of the TV series Big Little Lies. In a similar vein to her narrative films, Cow does not take a linear approach to storytelling, but has a poetic arc that leaves infinite room for interpretation.

Arnold hails from Kent, England, where she experienced a distinctly unbound childhood. Her mother gave birth to her at 16, followed by three more siblings by the age of 22. Her father was fully absent from her life by the age of 10. When she felt overcome by the tumult of life, nature was her haven—a nurturing sanctuary through which she could roam free and reconnect with herself.

“Whenever I have felt troubled or lost or overwhelmed with life I have always sought nature,” she wrote for The Guardian in 2021. “It has always grounded me and put me in touch with myself again. No one taught me this. It came quite naturally. Like some innate knowledge.”

At 18, Arnold left the tranquility of her hometown in Dartford, and moved to London. The bustling city not only transformed her life, it also altered her relationship with nature. Despite adopting stray animals and concerted efforts to travel to the countryside, the responsibilities of growing into adulthood left her emotionally disconnected from its grounding influence. While peering outside the windows of traveling trains and cars, Arnold developed a deep curiosity for the grazing cows she passed en route.

She writes, “Cows grazing in green fields. Pastoral, peaceful, romantic. Like a painting. I wondered about the reality of their lives and what that was really like. Making the film Cow emerged from that curiosity.”

Arnold’s insatiable thirst for reconnection, and quest to understand the inner workings of animal life, birthed Cow—an emotive work of cinematic art that uses an unconventional approach to pull at the heartstrings of its viewer. The film follows the life of Luma and her offspring, where the audience bears witness to their intimate bond, deep love for one another, and the violence and tragedy of enduring their lives as livestock in a cattle farm. 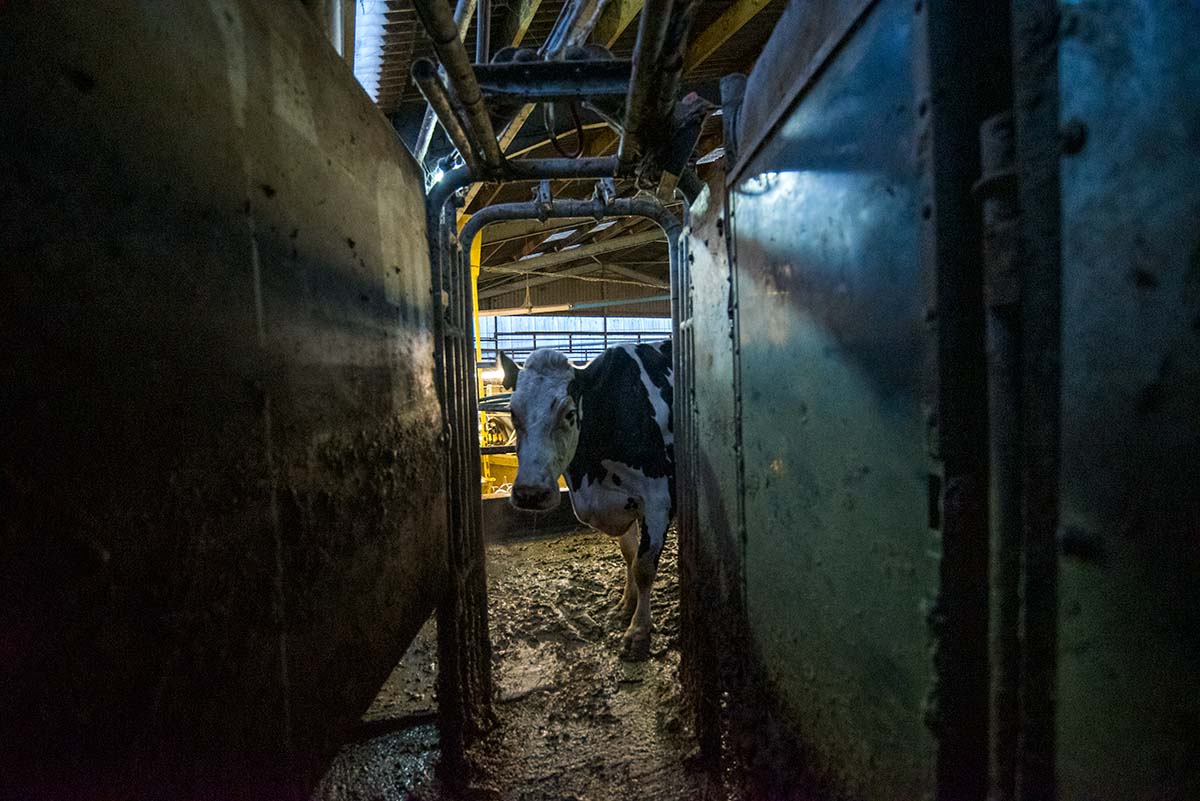 Arnold first had the idea of making a film that follows the life of an animal nine years ago. What makes Cow unique is its approach to evoke the empathy of its audience. Mainstream society has a difficult time empathizing with humans that have been “othered.” There is a legacy of filmmaking that has upheld the historical and continued dehumanization of certain groups of people, as well as the continued commodification of people of color in various industries, such as the prison system. If it’s so difficult for society to have empathy for other human beings, how can film be used to evoke empathy for another species? Arnold aspires to do just that in a style of filmmaking that attempts to capture the perspective of a cow, by literally centering Luma’s voice. She uses a cinema vérité style of filmmaking that artfully illustrates the moods and impressions of Luma and her offspring, making it difficult to deny that animals do in fact experience emotion. Arnold learned that a group of distinguished scientists of varying neurological science specialties had signed the Cambridge Declaration on Consciousness in 2012, which affirmed that comparable to humans, animals are truly conscious beings.

Arnold could not hide the harsh reality of Luma’s life—her soulful eyes express a feeling of sadness that is almost palpable. Most people only encounter cattle while they graze grasslands, as Arnold witnessed on her train rides: they appear peaceful, submissive, and devoid of misery and heartbreak. Arnold observes the full reality of one cow’s life, and in doing so, liberates the audience from our normally sheltered vantage point.

In an interview with The Film Stage, Arnold explained the importance of reconciling romanticized notions of the relationship between humans and nature with the reality of a deep disconnection between our perceptions of the two: “Our view of nature is a very romantic one—it’s very sort of pastoral. We engage with the romance of it, as opposed to the reality of it… So I thought, ‘Instead of the romance, what about the reality?’ Not like some of the real intensive reality, but just a consciousness, to show a consciousness. ”

The audience is granted a glimpse into this reality, where we observe the extensive labor and confinement Luma bears—from sexual exploitation through breeding and birthing multiple offspring that she is separated from, to undergoing constant extraction of milk for our consumption, to her predetermined death.

Cow is as compelling as it is haunting. Arnold and cinematographer Magdalena Kowalczyk feature close-up visuals of Luma’s face. Arnold told The Film Stage that she decided to work with Kowalczyk because of how beautifully she filmed the heads of cows in her native Poland. As we observe Luma throughout the film, we begin to recognize distinct features, such her head markings and wavering hooves. Extended shots allow for deeper insight into her spirited personality. In a particularly captivating scene, we see Luma not long after she gives birth, peering straight to the camera and incessantly mooing. The scene extends longer than expected, with each poignant moo sounding more heartrending than the last. What she is communicating is left to our own interpretation, but one cannot deny that she is conveying a feeling, one related to her newborn. The human voices of the farmhands are sidelined and the voices of the cow are in focus. Pop music infuses the film with an impassioned tone of both love and nostalgia.

We see the cattle stomach their existence in the cowshed, as well as enjoy and roam green pastures. Cow invites the audience to emotionally connect with nature, through connecting with Luma. Simultaneously, we witness Luma yearning to reconnect with nature outside the barn, which delivers the vital reminder that we are all a part of nature, and we progress through nurturing that connection.

Cow is historical content that reveals our relationship within our ecosystem. It reflects and archives our consciousness as a society in this period of time for future generations. We must also recognize that there are peoples across the globe, including many Indigenous communities in the western hemisphere, who carry an entrenched understanding and sacred regard for the interconnection between humanity and nature, such as the reverence for cows by some communities in India. Arnold has artfully crafted a film that reaches for people of all walks of life—those who honor animal life and nature, as well as those unfamiliar and disconnected from this worldview.

Through Cow, Arnold makes a strong case that in order to develop a genuine connection with nature, we must understand our inherent interconnection, and also recognize reality—the beautiful and the ugly. She expands on her motive in The Guardian, where she writes, “I hope this film in some small way can connect anyone who sees it not just to cows and other non-human conscious animals but to that deep knowing and animal nature in ourselves. That we are all connected to everything living.”

Raised in Honolulu, Hawai‘i, Imani Altemus-Williams is a freelance writer and emerging documentary producer, who is passionate about collecting stories that illustrate the collective experiences of colonized peoples, by not only highlighting injustice, trauma and pain but also their inherent resilience, strength and beauty.

END_OF_DOCUMENT_TOKEN_TO_BE_REPLACED

When Animals Attract: Docmakers Study Relationships between Man and Beast

Into the Wild, Ethically: Nature Filmmakers Need a Code of Conduct