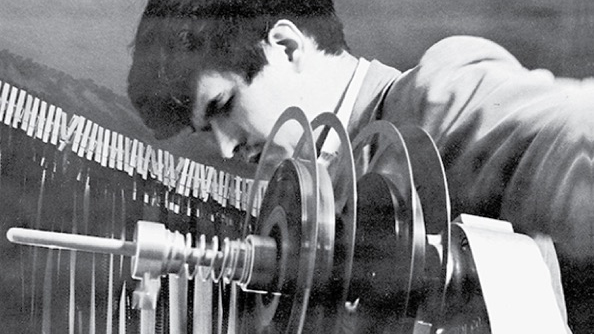 "Sex is a touchstone but not a foundation."

So says Stan Brakhage in the opening interview by P. Adams Sitney in Metaphors on Vision, first published by Jonas Mekas in 1963 as a special issue of Film Culture. Brakhage, considered one of the most influential figures in avant-garde cinema, reveals his most intimate thoughts on sex, love and death as realized both in his life and in his films. What emerges here is, to some extent, a portrait of the artist as much as it is a treatise on the nature of visual experience.

More than a book, this publication, out of print for nearly 40 years, looks and feels like an art object. Its large format, heavy cardboard-like cover and unique layout must have presented certain technical challenges to Anthology Film Archives and Light Industry, the publishing entities overseeing the project. Hand-written poems, detailed texts on his creative process, and line drawings reminiscent of automatic drawing developed by the surrealists as a vehicle to access the subconscious: All are reproduced on thick, densely textured, fibrous paper. While this edition preserves the original George Maciunas design, it is nearly impossible to read. The addition of the corrected, annotated version by P. Adams Sitney, printed clearly on white paper, is necessary to access the text without a struggle and most welcomed. It is bound together with the exact replica. Sitney is a well–regarded film historian who, along with Jonas Mekas, founded Anthology Film Archives in 1970. He was also the editor of the 1963 edition of Film Culture in which Metaphors on Vision first appeared, making him the ideal collaborator on this project.

James Stanley Brakhage was born Robert Sanders in 1933 in Kansas City, Missouri. His name was changed when he was adopted as an infant. Although he was married to his second wife, Marilyn Jull, when he died in 2003, it is his first wife, Jane, mother of five of his seven children, whose presence inspired his work and his thought processes at the time Metaphors on Vision was conceived and executed. His 1959 film, Window Water Baby Moving, records the birth of his first child with Jane.

As with many cutting-edge artists, Brakhage's earliest work was met with derision. At the same time Brakhage was developing his aesthetic philosophy, pure abstraction in painting, exploding in the canvases of Jackson Pollack and Willem de Kooning, posed similar perceptual questions, as do Brakhage's films from the 1950s. The films, as elaborated on in Metaphors on Vision, reflect his desire to liberate the actual act of seeing from narrative conventions. Like a painter or a sculptor, Brakhage physically scratched, dyed, tore and taped his film material. He even pasted actual moth wings onto strips of celluloid in a collage effect for his 1963 film Mothlight. When projected, the light and motion of the film seemed to bring the insect back to life.

There is a stark emotional and intellectual nakedness in Metaphors. Written while on the cusp of his eventual fame, Brakhage exposes all the contradictory feelings, fears and doubts that plagued him as a young artist. He openly discusses his fascination with death—how, as a "neurotic and sick" 26-year-old, he was practically crippled, walking with a cane and contemplating suicide. During the making of his 1958 film, Anticipation of the Night, Brakhage considered filming his own suicide by hanging for the final scenes of the 40–minute film. As shocking as this revelation is—his mention that he reached out to his wife Jane, who was also open at the time to considering suicide—seems to frame their relationship as eyeball-rolling melodrama. While he and Jane had "sex-love" and were open-ended in considering "sex-death," it was through their collaboration as filmmakers that they managed to survive.

Brakhage describes how he and Jane shared the camera between them, handing it back and forth during a quarrel in the 1959 filming of Wedlock House: An Intercourse. In the process of making this 11-minute film, they managed to gain a new view of each other and their marriage.

Death again emerges as a theme in Sirius Remembered, another 11-minute film shot in 1959 about the death of their dog, who was named Sirius. In discussing the filming of death and decay (the body of the dog was left above ground to rot), Brakhage says contradictory things that come across as drug-induced visions. When questioned, he makes no attempt to clarify—"because they can't be clarified." At one point in the interview with Sitney, he says, "I believe all good art is unengaging." Upon first reading, I thought this might have been a typo. However, the sentiment is reiterated when he states, "Everything in my early works that was engagement bores me now."

Dog Star Man, described as a "Creation Myth," is a series of four short films and a prelude released from 1961 to 1964; the series is usually shown together as one film. Brakhage cast himself as a woodsman with an ax climbing a mountain, in this seasonally structured film. Freudian dream analysis and chaos theory factor into Brakhage's work on Dog Star Man. He says he "had to start with material that was incomprehensible and work my way backwards." Dog Star Man is considered one of his greatest early works and was honored by an acceptance into the National Film Registry in 1992.

The question of narcissism is almost unavoidable in reflecting on Brakhage's interests and methodology. P. Adams Sitney raises the issue of narcissism in a question at the end of his 1963 interview. History seems to support the idea that all great art requires the artists concern with "self," a concern that must run deep in order to tap what becomes universal experience. In Metaphors, Brakhage defends the need to plunder one’s ego in order to create. Even during the birth of his second child with Jane, he postulated his death wish into the center of their marriage. But he also concedes that the source and center of his creativity is deeply indebted to love in general and the love in particular of Jane.

Ultimately, rising above the messiness of life is Art. It is the compulsion to make the work that always appears like a deus ex machina to save the day. At the height of every crisis, Brakhage finds sanctuary in creating. During the filming of the Prelude to Dog Star Man, he was also working on The Dead, shot in the Père Lachaise Cemetery in Paris. It briefly features Kenneth Anger, who represented "the living dead" to Brakhage because he spent years without working on his films. For Brakhage, it was literally his art that saved him. He admits, "The action of making The Dead kept me alive."

Brakhage went on to make over 400 films, shot in 8mm or 16mm and ranging in length from a few seconds to four hours. They are mostly silent and metaphorical—poetry in light. He wrote and taught about the visual experience up until the day he died of cancer at the age of 70. It is ironic that the art that sustained him was perhaps responsible for his death. Doctors believed that the coal-tar dyes he used in his filmmaking might have been a contributing factor in his developing bladder cancer. But it is also through his work that we come full circle, and in Metaphors on Vision, his ideas survive.

In conjunction with the relaunch of Metaphors on Vision, Anthology Film Archives recently concluded a special screening and lecture series, and according to the description, "countless screenings and events will be taking place at cinemas and microcinemas around the world in the coming weeks and months."