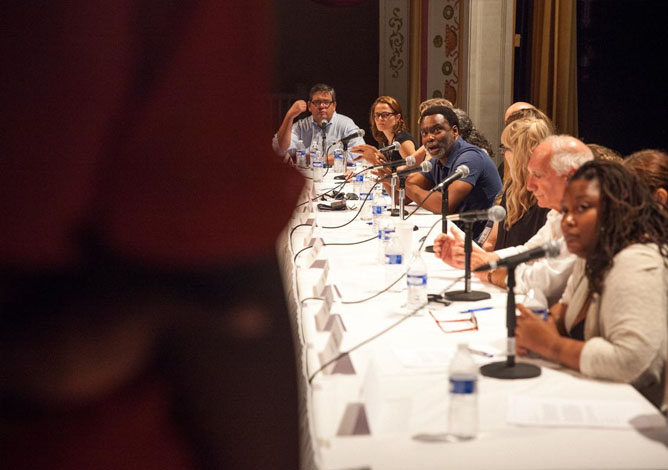 The Camden International Film Festival (CIFF), which ran September 17-20 in Camden, Maine, was launched a decade ago as a realized dream of founder/executive director Ben Fowlie, a Camden native and a graduate of the Emerson College Film School. First tapping into old Maine money and the rich Boston documentary community four hours to the south, Fowlie has since built a vital documentary showcase that has risen to prominence as must-stop destination on the nonfiction festival circuit. In a month opening with the Toronto/Venice/Telluride triumvirate and concluding with the IFP Market and the New York Film Festival, CIFF manages to attract a strong cross-section of filmmakers, gatekeepers, nonprofit leaders and educators for four intense days of screenings, panels, master classes, pitches and parties.

“I always go back to the idea that from day one our goal to become a gathering of filmmakers and film professionals here in Maine was the best thing we ever could have done,” says Fowlie, in a phone conversation after the festival. “That’s probably what has allowed us to continue to grow and stay relevant over the past 11 years. If we hadn’t, then we might have been a small regional festival that screens films to audiences but has no direct connection to the greater filmmaking community, and that certainly wasn’t something that interested me.” 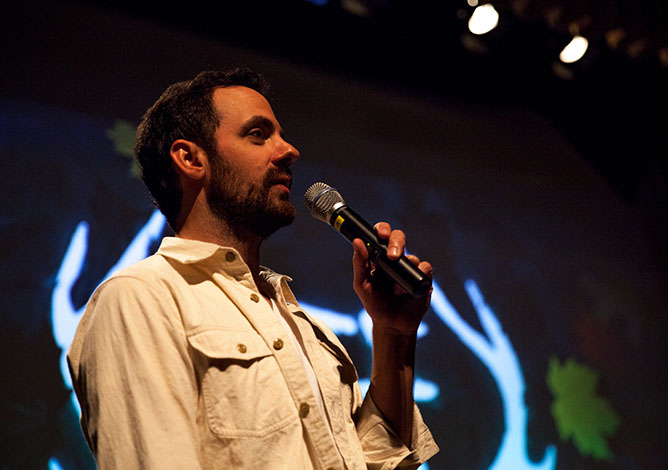 With a mix this year of festival favorites such as Morgan Neville and Robert Gordon’s Best of Enemies, Scott Christopherson and Brad Barber’s Peace Officer and Jimmy Chin and Elizabeth Chai Vasarhelyi’s Meru, alongside such venturesome fare as Travis Wilkerson’s Machine Gun or Typewriter, Dominic Gagnon’s Of the North and Olivia Wyatt’s Sailing a Sinking Sea, Fowlie and his team hit the kind of sweet spot that appeals to both local Mainers and an international clientele eager to make the long trek Down East.

“We're programming up to the last minute to see if we can really get current work that’s coming out of Locarno or even Toronto if it’s possible,” Fowlie explains. “We don’t shy away from work that has test-played at various festivals because there’s a value to exposing our local communities to it. But we are wholeheartedly committed to finding a way to be a festival where you can discover new work, and that’s a little bit easier for us to do with international work.

“There’s a slew of great festivals that happen in April and May in Europe, like Visions du Reel and Cinema du Reel in Paris,” Fowlie continues. “A lot of the more complex or more pure work doesn’t get the recognition it deserves in the US because there is a lot of work out there. It’s something that we've really strived to make sure we can highlight as best as we can. This year we made a commitment to say, OK, we're not going to necessarily look at the budget in the sense of, ‘Can we afford to become more international?’ We let the program drive it, as opposed to constraining ourselves financially or programmatically or logistically; to me it felt wonderful. A lot of the work we got—we don’t talk about premieres, but there’s nothing more exciting than being able to share work for the first time.”

Complementing the films at CIFF, Points North Forum, launched in 2011, presented a rich blend of pragmatics and aesthetics. Master classes from editor David Teague and director Alex Gibney afforded participants an opportunity to learn about their respective processes, while on the business side, Seed & Spark founder Emily Best and Vimeo’s Sam Morrill led respective sessions on crowdfunding and digital distribution. In addition, the Points North Pitch gave six emerging filmmakers the opportunity to present their works-in-progress to a panel of some of the heaviest hitters in the business—in front of a packed audience at the stately Camden Opera House.

“I stepped into this role in 2011, when we were still at that point where people didn’t really have a concept of what Points North was both in the industry and locally,” says Points North Forum Director Sean Flynn. “One of our biggest challenges and strategic goals over the last few years has been to build that up as a brand and get people excited about the programming. Ideally it’s always a diverse cross-section of issues that filmmakers have to deal with, whether it’s on the business side of things or approaching distribution or fundraising and how those landscapes are changing over time. But it’s also having that opportunity to take a deep dive into the craft and the art of nonfiction storytelling. And over time we realized that people were selling a lot more to the Masterclasses. We started bringing in editors about four years ago; Mary Lampson was the first one to give a Masterclass, and people were talking months later about how much it had inspired their own creative processes. We have been moving more and more in that direction, and this year was certainly a big step in the direction of doing more Masterclasses, more single presenter-led sessions.”

Centering his Masterclass around character development, editor David Teague showed clips, first takes and outtakes from Cutie and The Boxer and E-Team. “Think of yourself as a writer writing a story,” he advised. “Which characters would be most effective in serving the story and the theme?” Teague makes a point of not meeting the main characters until the picture is locked. “People on screen can come across as different than in real life,” he noted. “The essence of a dramatic story is suffering,” he proffered. “Who is suffering? What is the suffering about? What are other people doing about it?” 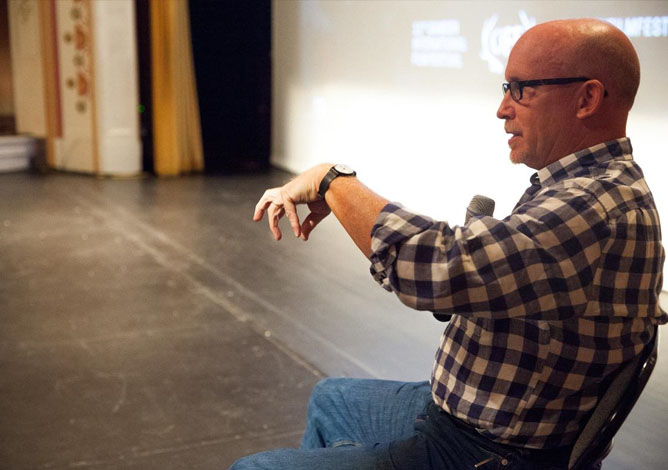 Alex Gibney has a prodigious canon from which to draw, but by honing in on such films as Enron: The Smartest Guys in the Room, Going Clear, Client 9, Taxi to the Dark Side and Steve Jobs, he managed to deliver a good precis of his methodology: “I’m like a private eye approaching a murder mystery,” he maintained. “You have a hypotheses that may be wrong. I keep questioning why I’m doing what I’m doing, and I’m not afraid of mistakes and detours. I give my editors the freedom to find stuff.” The private eye persona enabled Gibney to engage the Enron film as a “heist film,” which opened him and his editing team up to explore sub-plots; in the case of Taxi to the Dark Side, he deployed the trope of a murder mystery—that of an Afghani taxi driver at the hands of the US intelligence/military apparatus—as a touchstone for a more complicated exploration of the Bush Administration’s US foreign policy in the post 9/11 era. As for the participants in his work, Gibney encourages people to tell the story their way: “Be empathetic and be a good listener.” Summing up his gumshoe approach to his work, Gibney quipped, “It’s better to be Colombo than Sherlock Holmes.”

One of the more formally provocative programs in Points North Forum was “Being There: Stories of Place.” Taking its cues from legendary docmaker Ricky Leacock’s reflection on his own practice as a “search for the feeling of being there,” this session explored the very idea of ethnographic cinema, as well as direct cinema and cinéma vérité in this eras of DIY mediamaking. With Alice Apley of Documentary Educational Resources, one of the leading distributors of ethnographic cinema, and Ilisa Barbash, a veteran of Harvard’s groundbreaking Sensory Ethnography Lab, leading the discussion, filmmakers Turner Ross (Western), Olivia Wyatt (Sailing a Sinking Sea) and Dominic Gagnon (Of the North) shared their insights about the character, rhythm and language of place, the ongoing question of the camera as shape-shifter, and the challenge of reconciling pre-conceived notions of place and culture with the quest of the authenticity of being there.

While Ross and Wyatt both spent long periods of time acclimatizing themselves to, respectively, a Texas border town and the Moken culture of Burma and Thailand, Gagnon never left his editing bay in Quebec to craft his fascinating meditation on the Arctic Circle, Of the North. Drawn from 400 hours of amateur footage shot by natives representing the entire circumference of the Circle, Of the North is a 21st Century answer, of sorts, to Robert Flaherty’s epochal Nanook of the North; here, Inuits define themselves and their narratives on their own terms, with their own cameras. Their work is at turns rough and engaging, unsettling and endearing, and Gagnon has created a masterful pastiche that, with his mashup soundtrack of Inuit chanting, singing and rapping alongside natural and manmade sounds of the Arctic, subverts the very idea of indigenous representation in media. Dubbing himself an “armchair anthropologist,” Gagnon maintained on the panel and later after the screening, “I make films about people who film themselves.” As for “being there” in a place he never even visited, featuring people he never even met, Gagnon effectively created a place that doesn’t exist—“a fabrication of 100 different villages.” The result is a fascinating contemplation of identity and authorship.

It is discoveries like Of the North and engrossing sessions like “Being There” that lend CIFF its distinctive brand. Like two of its kindred spirits, True/False and Jihalava, CIFF has managed to make its remoteness an asset, giving visitors a true sense of being there.

END_OF_DOCUMENT_TOKEN_TO_BE_REPLACED

Premiering Documentaries in a Pandemic