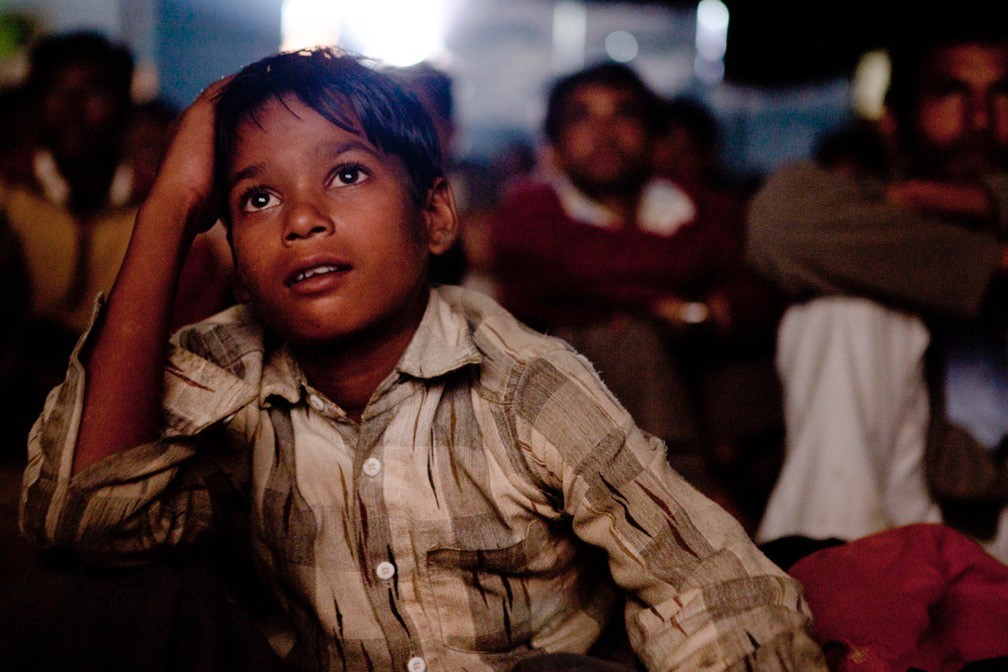 The Cannes Film Festival isn't particularly known for its devotion to the documentary form. Only twice in the festival's history has the Palme d'Or gone to a nonfiction film: in 1956 for The Silent World, directed by Jacques Cousteau and Louis Malle, and in 2004 for Michael Moore's Fahrenheit 911. This year, not a single documentary appeared among the 21 films selected for "main competition"—i.e. those with a shot at winning the Palme d'Or.

However, that doesn't mean there isn't space for documentaries in Cannes, although they tend to remain on the periphery, sheltered from the glare of the paparazzi and the glamour of the tapis rouge. There is a top prize for documentary, L'Oeil d'or (Golden Eye), which was created only last year by SCAM (Société civile des auteurs multimedia, the French guild that oversees the collection and distribution of royalties for multimedia creators), with the blessing of the festival.

As Anne Georget of SCAM wrote regarding the establishment of the award, "Amid the great cinematic celebration of the Cannes Film Festival, documentaries, often portraying cruel, sometimes despairing realities, might seem dull. We forget the jubilation that comes from sharing human stories, which end up going beyond their authors and participants to embark everyone—creators and spectators—on an emotional roller coaster that is showcased through film…In these troubled times of ours, the world obviously is in great need of such films." 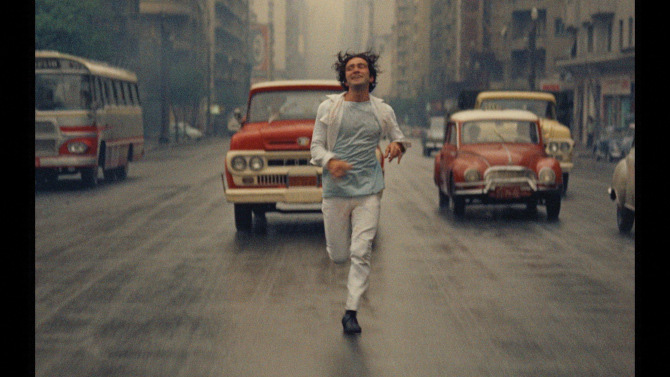 L'Oeil d'or went to Cinema Novo, directed by Eryk Rocha, the story of the Brazilian cinematic movement of the 1960s that challenged the authoritarian, military-led government in Brazil. "To be in Cannes presenting this film and to win this recognition is very powerful," an emotional Rocha told Documentary shortly after he won the award. "I believe this recognition with the Golden Eye can open more possibilities for the film to be discovered in other countries."

The Cinema Travelers, a poetic examination of India's dying tradition of itinerant cinemas that move from remote village to village, earned a special recognition from the documentary jury. "I think it's heartening that Cannes is increasingly giving more attention to documentaries, in how documentaries are programmed and how there is a recognition for documentaries through the award," Shirley Abraham, who co-directed The Cinema Travelers with Amit Madheshiya, told Documentary. "There's everything to celebrate increasingly." 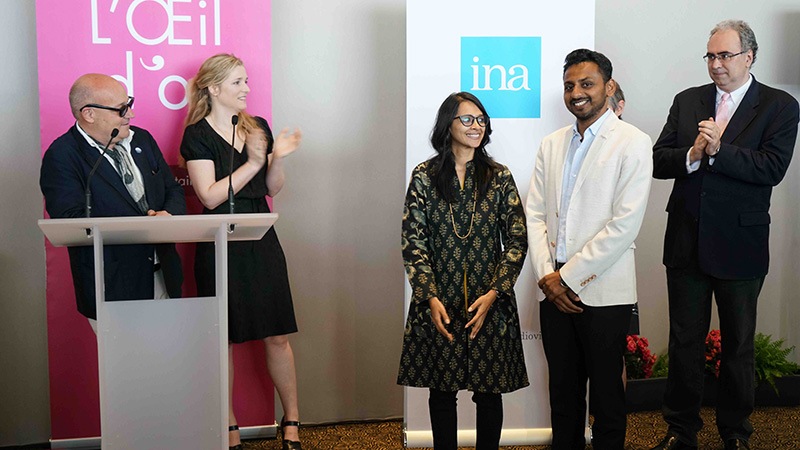 Most of the docs were programmed in the Cannes Classics section, which, despite its name, is home mainly to new films, both narrative and documentary. Cannes Classics premieres were held in the Salle Buñuel, a 300-seat venue inside the Palais des Festivals. Although the room is modestly-sized, there were plenty of seats unoccupied for the documentary premieres I attended. "I was surprised; I was depressed," Fisher Stevens admitted to Documentary about the lack of a full house for the premiere of Bright Lights: Starring Carrie Fisher and Debbie Reynolds, which he co-directed with Alexis Bloom. "The film played really well anyway. But they [festival programmers] warned us. They said, 'You know in Cannes, the Cannes Classics is good, but the attendance is not always that amazing.' I think because Cannes is so glamorous and it's all about the glam, we really are not that important in the festival."

Carrie Fisher interrupted work on the latest Star Wars film—and a book she's writing about her experience making the original Star Wars—to attend the world premiere in Cannes. The documentary, which will air in 2017 on HBO, explores Fisher's relationship with her mom, Debbie Reynolds. "My mother, she was getting more frail," Fisher told Documentary. "She's been in a lot of pain for a long time and she still was performing, but it would cost her a lot [physically]. So I thought, I would like to capture her performing and also capture her off stage, off screen as herself—which is hard to do because she has a persona. She seems down to earth, and I always say, 'Down to earth from where?'"

Gianfranco Rosi, who won the Golden Bear at the Berlin Film Festival in February for his documentary Fuocoammare, presided over the documentary jury in Cannes. "Documentaries here didn't make their way into main competition as they did in Venice and Berlin," he told Documentary. "Besides Michael Moore being here a few years ago, there really hasn't been much space [for docs] in the main competition. It's good there is an award for documentary, but maybe in the future—five, six, who knows how many years—it's not going to be necessary to have an award like that because documentaries will find quite naturally their own space in the main competition."

Cannes can still be an important launching pad for a documentary. Last year, Asif Kapadia's Amy premiered here before going on to win the Academy Award. This year, Laura Poitras chose Cannes to premiere Risk, her much-anticipated follow up to her Oscar-winning Citizenfour. 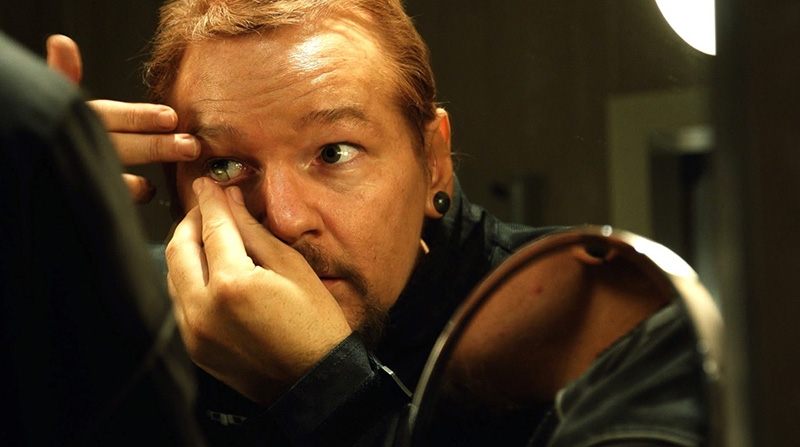 Risk, which focuses on controversial Wikileaks founder Julian Assange, played in the Directors Fortnight, a section mostly characterized by auteur-driven projects. The 800-seat Théâtre Croisette hosted a capacity crowd including Poitras and two of her film's main characters, Wikileaks' Sarah Harrison and Jacob Appelbaum. (Assange himself, of course, couldn't attend; he remains sequestered in the Ecuadorean Embassy in London, where he sought political asylum in 2012 to avoid extradition to Sweden to face questioning about an alleged sexual assault.).

At a party for the film afterwards, Harrison suggested to Documentary that the festival was an ideal place to premiere Risk because it attracts the world's media: "I definitely think Cannes is an important and a good platform to be able to display the work that we do and the threat that we face."

The concentration of media in Cannes makes the festival useful to promote new films and upcoming projects. General Film Corporation and Upside held a special event two days into the festival to announce the launch of a documentary based on Thomas Piketty's international bestseller, Capital in the 21st Century. The famed French economist attended the event overlooking the Croisette, along with producer Matthew Metcalfe and Justin Pemberton, who will direct.

"This documentary would be to the economy what An Inconvenient Truth was to climate change: a turning point that we won't be able to ignore afterwards," Metcalfe said in a statement. Piketty told Documentary he anticipated playing a limited role in the production, which is expected to begin filming in the fall. "I will be a very small part. My expectation is that they will show me what they've done, I will be very happy and I will not do anything except make a few suggestions. Really, I don't want to become a scriptwriter or moviemaker. I'm not good at that. My work is to write books…This was entirely unexpected but in the end I'm very, very excited and I'm looking forward to seeing this. I'm looking forward to being surprised by the movie. I think it will be very different from the book, of course."

The documentary activity in Cannes extended to the Marché du Film, the film marketplace that runs concurrently with the festival. For the fifth year, the Marché included the "Doc Corner," a space reserved for documentary makers, distributors and other interested parties to meet and do business. The Ford Foundation's JustFilms helped fund the space, as well as a mini-conference titled "Global Awareness for Social Justice" which featured documentary filmmakers Gabo Arora, Askold Kurov and producer Lawrence Bender, who recalled bringing An Inconvenient Truth to Cannes 10 years ago. "We were an official selection, out-of-competition documentary and we came here with Al Gore," he said. "It was a fantastic screening at the Palais. To see your documentary on such a big screen was a big honor and a great event. It helped to launch our movie."

Across the Marché production companies and distributors looked to sell their documentaries to international territories—for example, a film on the actor Leslie Howard, another on photographer Robert Doisneau and one in production on the career of Quentin Tarantino. During the festival, The Weinstein Company announced it had picked up the Tarantino doc, to be produced by Tara Wood of Wood Entertainment. "There's a universal understanding when you hear the name Tarantino," Harvey Weinstein said in a statement. "Tara's film will give audiences a glimpse into the man we have had the honor of knowing, and we couldn't think of a better home for a film documenting Quentin."

Doc & Film International also represented In Jackson Heights, the recent film from veteran documentary director Frederick Wiseman, whose first film came out in 1967. Wiseman was honored in Cannes for his body of work—more evidence that the festival does indeed pay some attention to the nonfiction genre.

END_OF_DOCUMENT_TOKEN_TO_BE_REPLACED

After a Two-Year Drought, A Sprinkle of Docs at Cannes