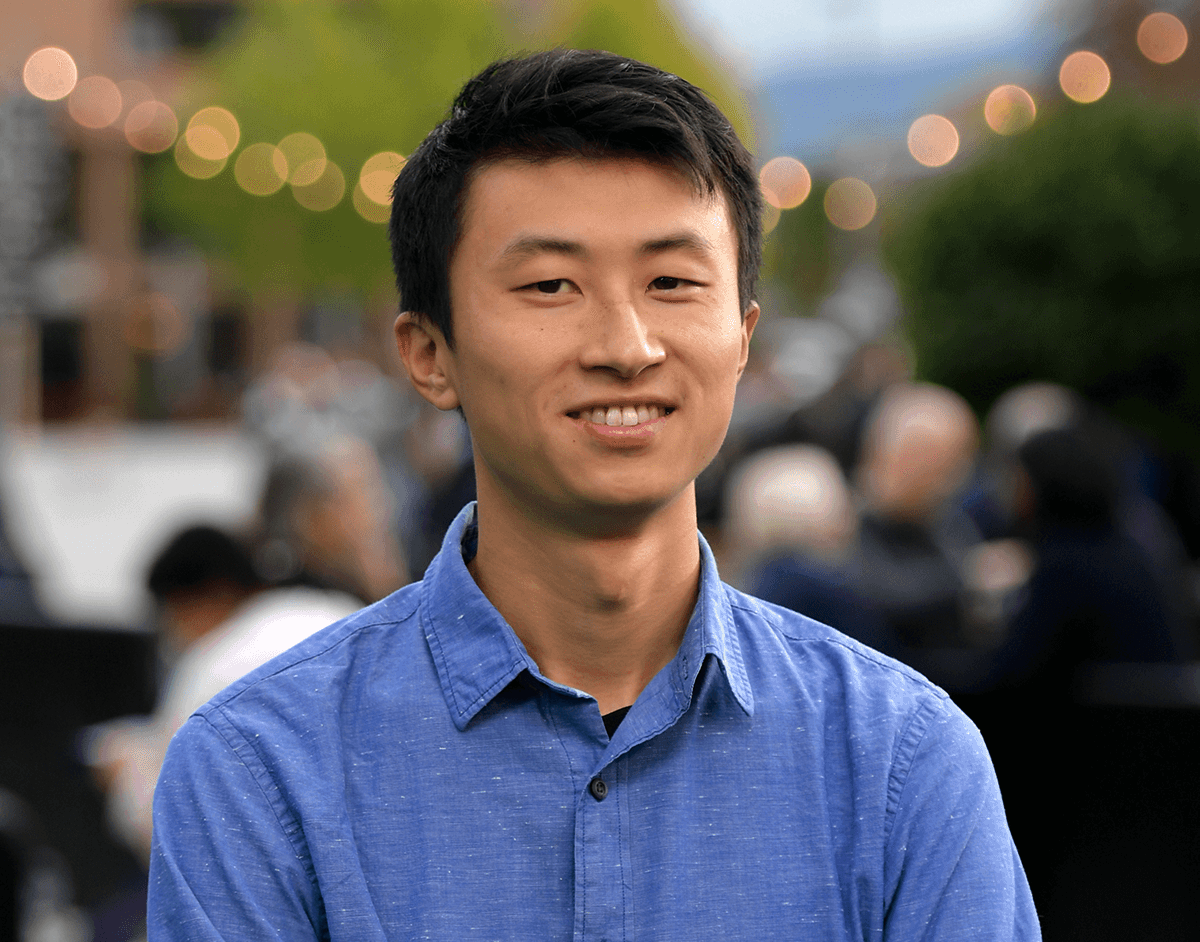 Documentary in 2018 is an embarrassment of riches. The field overflows with talent, stories, and disruptive dealmaking that rewards audiences and filmmakers alike. Few young storytellers have emerged on this scene as fortuitously and forcefully as Bing Liu, the 29-year-old Chinese-American director of this year’s breakout Minding the Gap. Liu’s character-driven, vérité documentary—about vulnerabilities of modern masculinity, cycles of intimate violence, and the pleasure and solidarity of skateboarding—couldn’t be more relevant and surprising. For capturing our zeitgeist, it has earned hundreds of headlines (A.O. Scott calls the film “astonishing”) and dozens of awards including the Special Jury Award for Breakthrough Filmmaking at the 2018 Sundance Film Festival. Minding the Gap is spellbinding, but the process behind its creation was far from magic. As the Chicago-based director tells us in a phone interview the story was shaped “by a thousand lashes” over spare weekends and off-hours between Liu’s paying gigs as an International Cinematography Guild director of photography; later, it found a home at Kartemquin Films with the support of Gordon Quinn, Diane Moy Quon and a community of fellow documentarians. Over years of meticulous craftwork, experimentation, and collaboration, Liu realized his vision for a film that not only documents and critiques but also has the power to heal. On December 8, the IDA will recognize him for this remarkable achievement with the 2018 Emerging Documentary Filmmaker Award.

I interviewed your executive producer, Gordon Quinn, when he was honored with the IDA Career Achievement Award in 2015, and he told me that a liberal arts degree is ideal preparation for filmmaking—because he uses it every day. Do you agree?

I remember a journalism class where the professor was really traditionalist. She gave us a New Yorker article that had a subjective insertion of the journalist in the article, and she was touting it as an example of bad journalism. I disagreed. There was a lot postmodern thought going on in classes; a lot of professors were playing around with the idea of how we find truth, where meaning is derived, whether it’s derived from writing, the reasoning behind the writing, or something altogether separate.

You majored in English. Did you know you wanted to make films?

I went to community college before University of Illinois, and I took a couple of production courses there. But by that time I had already trained myself through message boards and making my own films as a teenager. I made several shorts starting when I was 17. The first was on two Vietnamese immigrants who had both just happened to move to Chicago in ’93—one because her father was a South Vietnamese army captain and the other was adopted from an orphanage. They both went through a lot of trauma. It was a reflection on their pasts and then finding themselves in the present.

The other short I made, I was fascinated by the fact that at skate spots there would be more camera lenses than skateboards. So I interviewed a bunch of photographers and videographers— I think that’s where I got really English major-y. It was like trying to deconstruct camera lenses and perspectives and isolation and what it all meant in the skate world. Minding the Gap was sort of a combination of those two projects. It’s like I dug into some really personal themes with the immigrant project and then I wanted to explore that in the skate world.

You become a Kartemquin Fellow in 2014 while you were working as a DP. What did you gain from that experience?

I didn’t even know about Kartemquin before. I applied with two days left on the deadline and it was just happenstance. I watched Hoop Dreams and The Interrupters and Stevie; it was humongous. There are so many things that I never thought about, like the relationship between filmmaker and subject, and showing your film to the people that participate in your documentary.

Minding the Gap really felt like a bedroom project where it’s like, “I just shot something last weekend and I’m working 14 hours a day on this set humping camera lenses up and down stairs.  I can’t wait to go home and edit that scene because I know there is a moment in there.” That was the process. Once in a while I would feel like I had something to share, or like I was running around in circles and needed a feedback session. That could mean Gordon and me in a room, or it could mean inviting the Kartemquin community. The beauty in Kartemquin is that there is never a sense of, You should be making it this way or doing it that way. They’re just really honest about how they feel. 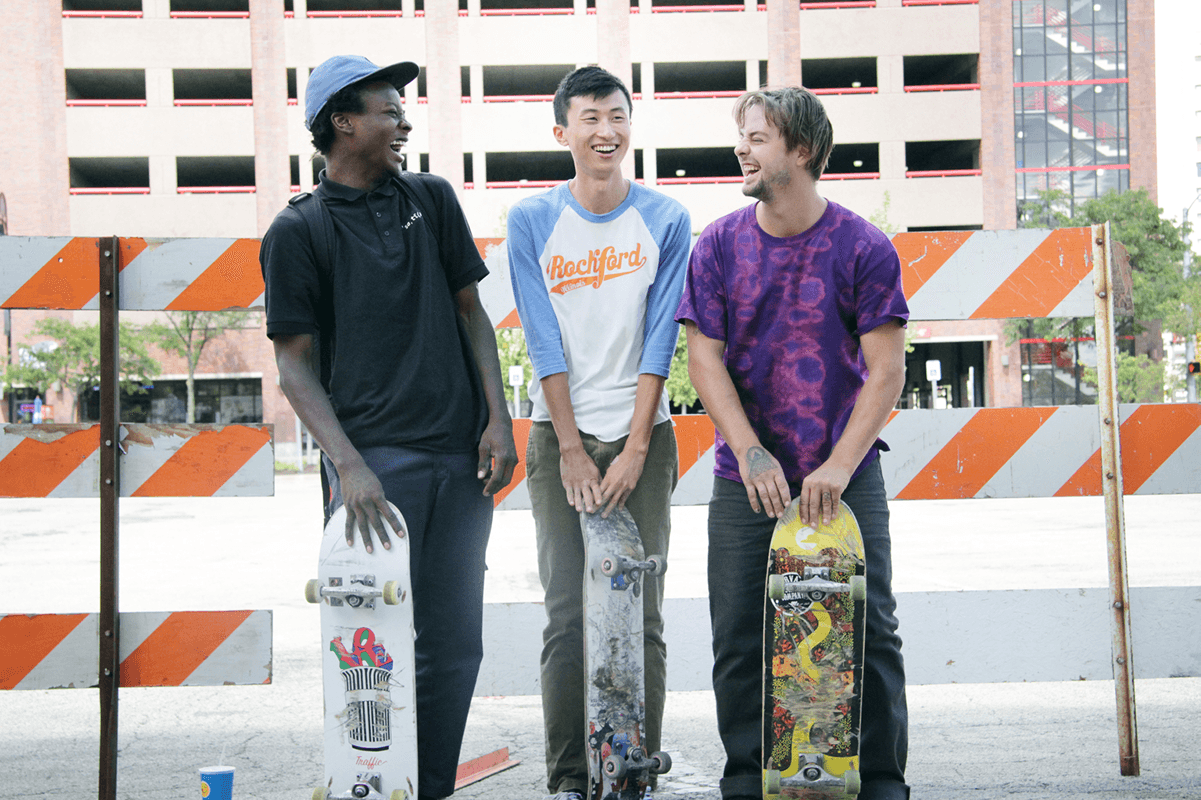 Minding the Gap is celebrated for being political without being about politics. Did you go in with political intentions?

I didn’t go into it in a legislative change sort of way. But I entered the project wanting to talk about abuse and trying to find ways to get young skateboarders, young men, engaged with child abuse and domestic violence. The project before Kartemquin was very on the nose. It was like literally skateboarders on the screen talking about trauma and abuse. Creatively the most valuable takeaway from working with Kartemquin was just really believing that characters’ lives can yield organically all these themes and issues that are political.

I believe that I took a stance in the film. Within the film I’m saying it in my own way. I’m saying child abuse has negative effects, domestic violence is complicated and wrong, but it’s also about cycles. It doesn’t help to just demonize perpetrators. And I’m saying that economics has a lot to do with the way that young people are growing up today in America.

One of the main characters, Zack, I was surprised by who he supported in the 2016 election. It was a time when all this media, everyone on the left was surprised and sort of interested in the white working-class experience. And I was like, Oh, I have that in a long-form story where we can really get at it on a psychological level. So I started cutting an arc, reshaping Zack’s storyline, but then Steve James—I don’t even think I showed him the cut, we just talked about it—he was like, I don’t think that’s a very good idea. That was my process: I just tried stuff for years and the film was very much shaped by a thousand lashes. Steve rightly said that would polarize the film too much and take away from the evergreen universal accessibility of the story.

Masculinity, violence, race: These are urgent themes in our culture. Is it important that documentaries are timely?

I couldn’t have known Minding the Gap would have been this headline-y when I first started.  I’m interested in timeliness to the extent of, Does it help push the issues forward? What’s the impact of timeliness? There is a whole cottage industry of organizations that try to make documentaries have measurable impact and this is one of those films that’s on the looser, more interpretive, artistic end, that’s not as explicit. I think it’s more about the long-term effects of this film, and a lot of it is immeasurable. It has to do with incomparable things like perceptions, understanding, empathy, the way that we think about things like emotion and race and fly-over towns or whatever.

Timeliness, the way I hear it used, speaks to this world of campaigning for rewards and posturing for critical acclaim. But what matters to me is what kind of impact it has. The easiest measure for that is responses, and the responses have been amazing.

Any big surprises in responses to the film?

Probably the biggest surprise is, it’s really hitting hard for young fathers, new fathers, but everything else is sort of like I expected. Kiere is getting tons of love through social media—I was looking forward to that while making the film; now it’s happening.

My relationship with Zack is complex. He reads the press and knows how I talk about the film and I’m not an apologist for him. But at the same time, I don’t demonize him and he feels comfortable reaching out to me. He got cast for a fiction film, the lead in a low-budget SAG movie. He plays this father of two daughters and he’s having a lot of internal issues so he runs away from the family. I visited him on set and he was like, “Yeah, it’s weird because making a movie is sort of like skateboarding. You have to film 30 takes to get one right.” But also he’s been crying a lot without being asked to because he pulls it off from his own life. So it’s strangely therapeutic for him. That was kind of surprising.

While you were busy with Minding the Gap, you were also a segment director on America to Me. What was that like?

I get an email from Steve James in early 2015 and he was looking for young filmmakers to help him on his series. We met for coffee and we talked about, not even filmmaking; we talked about our lives, our backgrounds, and then another month went by and he hired me. It was really great seeing him lead a team, seeing him handle situations that popped up during the course of America to Me, like handling access with the administration, or access, or the way that he gathered the team to have check-ins. It really was an amazing experience. And because Participant was behind it, they care so much about impact. They’ve done a lot with the film; they’ve brought it to high schools, done conferences and panels, involved a lot of the participants.

Who do you dream about collaborating with?

I’d love to work with Steve [James] again. If I could ever get a chance to work with Gordon [Quinn]…He’ll probably make another film. Oh, there are so many people. Jeremiah Zagar, his first documentary, In a Dream, might be my favorite documentary of all time. If Linklater ever made a documentary, just because his film Waking Life was the film, oddly enough, that made me want to start making things other than skate videos when I was a teen. Harmony Korine, maybe. His early stuff is what I latched onto and I feel like it would ruin it to work with him. So many people.

Peter Kurie is a cultural anthropologist working in film and television. He can be reached at www.peterkurie.com.