Exploring the Doc/Journalism Connection: A Dispatch from Two J-School Confabs 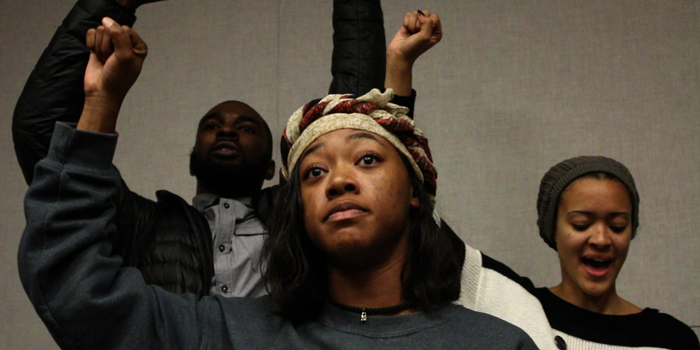 By shining a light on what is becoming an increasingly dynamic relationship between the documentary filmmaking and journalism worlds, two recent conferences have focused attention on these two separate but occasionally overlapping and intersecting areas of inquiry and art. Add into the mix last year's Dangerous Documentaries report from the Center for Media & Social Impact, which also highlighted this relationship, and there is definitely something in the air. The two conferences, both held within the belly of major journalism schools, reveal key similarities and differences between documentary and journalism when it comes to practice, practitioners, form, audience expectations and support. Here are some highlights from both conferences:

Based on a True Story V, Missouri School of Journalism, March 2 – 4

For the last five years, the delicious main course of the True/False Film Festival in Columbia, Missouri, has been preceded by a tantalizing appetizer called "Based on a True Story," which is a conference dedicated to "The Intersections of Documentary Film & Journalism," (affectionately referred to as "BOATS"). This year's conference marked a collaboration between two new ventures: the School of Journalism's Jonathan B. Murray Center for Documentary Journalism, which began the academic year with its first cohort of undergraduate and graduate students, and the Sundance Institute's Art of Nonfiction initiative, launched at this year's Sundance Film Festival with the mission of supporting documentary filmmakers who explore "inventive artistic practice in story, craft and form."

Kicking off with an evening presentation that had as its centerpiece Werner Herzog's documentary Little Dieter Needs to Fly, the BOATS conference explored the edges of the documentary/journalism relationship but also the edge of documentary itself, looking at those spaces where it merges into fictional modes. The remarkable thing was not that this discussion was taking place, but that it was taking place here, in the world's oldest school of journalism, rather than as part of True/False, which has always perched itself on such a narrow ledge (Note: T/F and BOATS support each other and are, in fact, quite complementary events.). Equally remarkable was that no one on the journalism side seemed bothered by this juxtaposition. For example, the warmth and mutual support between Robert Greene and his Murray Center students was clearly apparent during the three-day conference; they draw inspiration from him, and he, in turn, supports their growth as filmmaker journalists. In addition, some students have even been a part of Greene's own creative practice, contributing to his 2016 Sundance documentary Kate Plays Christine.

The Wednesday evening opening session came with the somewhat dubious title, "Marrying Journalism and Art." Based on what was said the rest of the evening, the marriage seemed more like a tentative courtship, with editor and frequent Herzog collaborator Joe Bini ("I am a filmmaker, not a journalist.") and Sundance Documentary Film Program Director Tabitha Jackson asserting the filmmaker's credo of artistic expression, with Bini especially wary of anything labeling documentary work as journalism and Jackson asking, "Where does journalism fit? Where does documentary sit? We conflate them at our peril." Nonetheless, Jackson—one of the few, if only, common denominators between both BOATS and the Logan Symposium—has become a key voice in exploring these points of intersection.

Day Two of BOATS featured two in-depth conversations and sneak previews with the Art of Nonfiction fellows: Robert Greene, himself a fellow, interviewing fellow Margaret Brown (The Order of Myths), and writer Sam Adams talking to fellows Omar Mullick and Bassam Tariq (These Birds Walk). From the easy rapport between Greene and Brown, it was clear that if creative collaboration and mutual support between the fellows are two byproducts of the Art of Nonfiction initiative, then Year One can already be considered a success. The four filmmakers were like middle schoolers bonding over the course of a summer camp. These are the kinds of relationships that will stick for a lifetime.

A remarkable point of intersection between the documentary and journalism worlds occurred at the True/False screening of a short Field of Vision film called Concerned Student 1950, about racism on the Mizzou campus and the protest movement that it spawned at the end of 2015. Made by three Mizzou students (two of whom are in the Murray Center program), who were granted exclusive access that none of the national media covering the story was able to obtain, the film depicts the events and the protest movement from the inside out. The festival's Co-Conspirator David Wilson told Indiewire, "Nonfiction filmmaking and journalism do not always have the same goals. But when extraordinary craft meets meticulous reporting as history gets made, this is as good as documentary gets." According to the True/False Daily Digest, "The screening at 11:45 p.m. on Saturday night of Concerned Student 1950 became a historic occasion in itself, the most memorable moment in 13 years of True/False…. Was it kismet, serendipity, or pure luck that the biggest, most explosive thing that ever happened to Columbia coincided with the birth of the Murray Center for Documentary Journalism AND New York-based Field of Vision?" 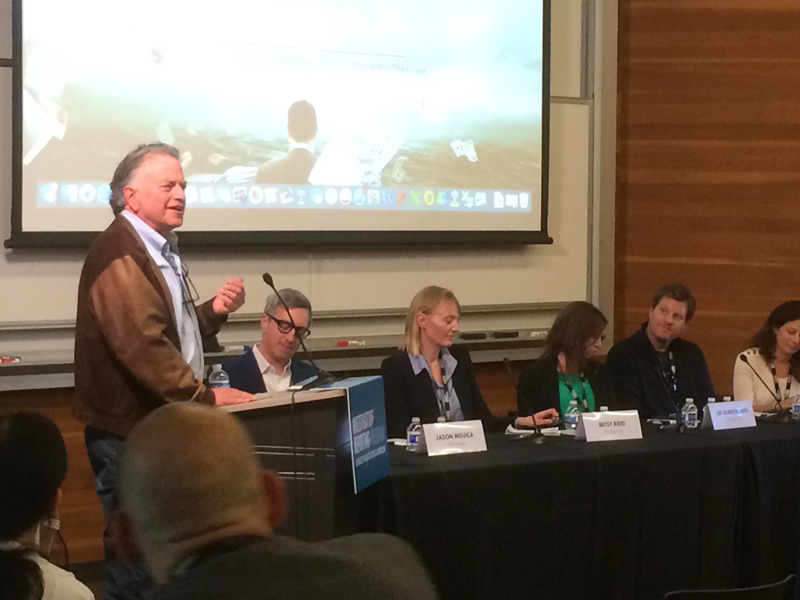 If the primary BOATS storyline was about documentary artists coming to the mecca of journalism academia to discuss their craft, then the Reva & David Logan Symposium on Investigative Reporting was mostly the reverse—an opportunity for journalists, documentary filmmakers and supporters of journalism to hear how investigative reporters/journalists do their work, and, judging by the large number of people in the room with the words "Pulitzer Prize-winning" in front of their names, do it damn impressively. Even though there were plenty of documentary filmmakers populating various panels (and plenty of journalists who make documentaries), the culture was clearly more dominated by the newsroom than the edit suite.

Starting on the morning of April 1, investigative reporting legend Lowell Bergman, who broke the big tobacco story that was the basis for the 1999 movie The Insider and is also the founder of the Investigative Reporting Program at UC Berkeley, began by announcing that the assembled reporters in the room had Bill Clinton running scared. Why? Because Bill and Chelsea Clinton were on campus for several days of activities affiliated with the Clinton Foundation, which had made it clear to Bergman that, well, reporters were not exactly welcome to cover the former president. What ensued was a cat-and-mouse between Bergman and the foundation that may or may not have been entirely true—this being April Fool's Day, it was hard to distinguish fact from fiction—but what was clear was that Bergman relished the thought of a former POTUS being within such easy reach of those who live to investigate the powerful and hold them accountable.

From my perspective, as someone who works in the documentary space, perhaps the most eye-opening panel was the first one, an annual tradition at the Logan Symposium called "How the Sausage Is Made." The litany of "Can you top this?" stories of intrepid reporting brought home the fact that, contrary to the belief that shrinking budgets devoted to investigative reporting by mainstream media outlets has caused the profession to whither, there are still many, many reporters doing amazing, in-depth investigative work that is exposing corporate malfeasance, government wrongdoing and other abuses of power. Several people made the point over the course of the three days that just a few years earlier investigative journalism seemed on the wane; now we are in the midst of a renaissance. Propelled by a combination of old stalwarts, new online platforms, nonprofit news organizations and funders, the general state of investigative reporting has never been better. (However, investigative coverage of local news at metro newspapers has been suffering and in decline due to cutbacks.)

Other panels of note included "Covering Cops," which featured reporters and a former LAPD patrol officer-turned-academic speaking from personal experience, as well as from years of reporting and studying the issues; "Who's Investigating the Super-Rich?" with several journalists, along with filmmaker Alex Gibney (yes, you can call him a journalist), discussing both the challenges and consequences of covering the Koch brothers and other rich and powerful people; "Reporting on the Poor," which assembled an extremely broad array of points of view and backgrounds, including documentary filmmaker Maggie Bowman of Kartemquin Films; a conversation starring Spotlight producer Blye Faust and the real-life "Spotlight" team leader Walter Robinson of The Boston Globe; and "Advocacy and Journalism," moderated by documentary filmmaker Jon Else, which featured a majority of documentary filmmakers including Charles Ferguson (Inside Job) and Dawn Porter (Trapped), as well as Sundance's Tabitha Jackson.

At the conclusion of the "Advocacy" panel, in a moment that may have exposed a bit of a fissure in the documentary/journalism discussion, Bergman expressed his wish that some documentary filmmakers do more to represent other points of view besides their own; Porter quickly retorted that she, in fact, had gone to great lengths to reach out to opposing points of view throughout the making of Trapped. It felt like the beginning of a dialogue that will likely take place at other conferences and symposia.

Finally, the Logan Symposium ended on an extraordinary newsbreak worthy of all those Pulitzer Prize winners. Peter Bale, chief executive officer of The Center for Public Integrity, announced that The International Consortium of Investigative Journalists had just broken the story of the largest news leak in whistleblower history, "The Panama Papers." Over the course of the next 24 hours, folks in that very room and in newsrooms across the world would focus their attention to the secrets that people in power would prefer we never find out about. The whistleblower's first contact began with the statement: "Hello, this is John Doe. Interested in data?" We certainly are, and, thankfully, we have investigative journalists and documentary filmmakers who are, too. To read more about how the story broke, click here.

END_OF_DOCUMENT_TOKEN_TO_BE_REPLACED

Good Press, Big Buzz and a Positive Experience: A Primer on How to Make the Best of the Fest