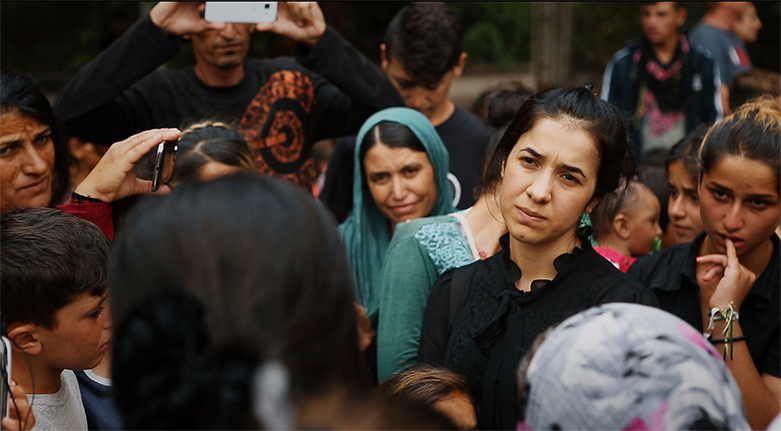 Alexandria Bombach's On Her Shoulders opens with a scrum of photographers. Everyone is trying to get the shot. Many are going for selfies. They want to share the frame with a notable person. For the first few moments, we cannot see who the center of attention is. A young woman emerges from the crowd. This is our first glimpse of 2018 Nobel Peace Prize Laureate Nadia Murad Basee Taha.

We see her next in a quiet moment, writing in a notebook. We learn that Nadia is a Yazidi survivor of ISIS genocide and sexual slavery. This juxtaposition—the mass of media demanding access set against the young woman stealing a moment of solace—gives us our first clue to the subtle methodology of this film.

Winner of the Documentary Directing Award at Sundance, On Her Shoulders takes on difficult issues that we have seen on film before. However, Bombach’s treatment provides a critique that is uncommon and necessary. It is an important film that is all the more needed because it is also insufficient.

On Her Shoulders is engaged not just in telling Murad's story, or in telling the story of the Yazidi genocide under ISIS (though it does these things). Rather, Bombach's goal is to show how an activist is created by the political and media forces that surround her. The film is a study of how good intentions can lead to cringeworthy moments, and how storytelling itself can be morally flawed.

In an early scene, Murad is subjected to a BBC Radio interview. "Take us back to that day," she is asked. "Tell me what it was like to be treated like a piece of property." It is impossible to miss that she is being re-traumatized through this process. The questioning about her ordeal borders on cruel and the interviewer feels the need to justify: "I know how hard this is, but it's so important to tell the story." Bombach deftly cuts away to shots from later in the day. We are invited to contemplate the painful effects of retelling this story. A montage of media clips shows just how often she is put through this.

Murad makes her motivation clear in Bombach's own interview with her. She explains that after escaping ISIS she was taken to Germany for treatment. It only took her one psychotherapy session to realize that she could not pursue her own healing knowing that thousands of fellow Yazidis remained in torturous captivity. She decided to become an activist.

In another early scene, Murad is speaking before a UN committee. We learn that this is somewhat of an audition. She is seeking to become the UN's Goodwill Ambassador for Dignity of Survivors of Human Trafficking. This quest gives the film its structure, but Bombach is more concerned with the process than the result. Like an actor, Nadia is being coached and prepped. "They were watching," her UN advocate tells her. "We are on the right track."

Like the selfie-takers in the first shot, we see Canadian parliament members faun over Murad. One poses for a photo with her and another tells her how her own mother wants to invite her home. The politician is seemingly oblivious to what this must sound like to someone who has lost her own mother to genocidal violence. They mean well, and it is better to get this attention than to get ignored (as the Yazidis largely are by US politicians). However, it is cringeworthy.

Bombach walks a tightrope with this material. Her choices as director (as well as director of photography and editor) are fraught. On one side is the danger of failing to recognize the horrific realities of the story. On the other are the sensationalism and objectification that are exposed in the media portrayals and political grandstanding. When done well, documentary can (at least partially) escape the sensationalistic tendencies of news media and do a degree of justice to the traumatized and the causes they represent.

Bombach spends the time to allow us to observe Murad in a wide range of circumstances that give full dimensionality to her complex life. Personal moments such as cooking food with her found family of activists or getting a haircut remind us of her humanity as a young woman capable of joy. Bombach has a keen eye for these moments, as well as the edgier ones. Rendered mostly in an observational style free from overt commentary, we take in these scenes as life lived, not a polemic. As viewers, we are free to judge the merits of the Canadian politicians, the pain of refugees, and the strategic positions of political players.

This largely observational approach is augmented by the formal interview Bombach conducts with Murad. Shot against a black background, she looks directly into the camera and speaks to the audience. We see her clap her hands for sync and shyly smile. She takes a sip of water from a mason jar. These small breaks in the fourth wall distinguish this from the media interviews and help substantiate the trust between filmmaker and subject.

More important are the questions Bombach asks, and especially the ones she doesn't. Murad does not talk about how she suffered in captivity; rather, she talks about her goals as an activist and the challenges of reaching them. She wishes for fewer questions from the media about the sensational details of her captivity. She wants to be asked about solutions: "What must be done so Yazidis can have their rights? What must be done so a woman will not be a victim of war?" 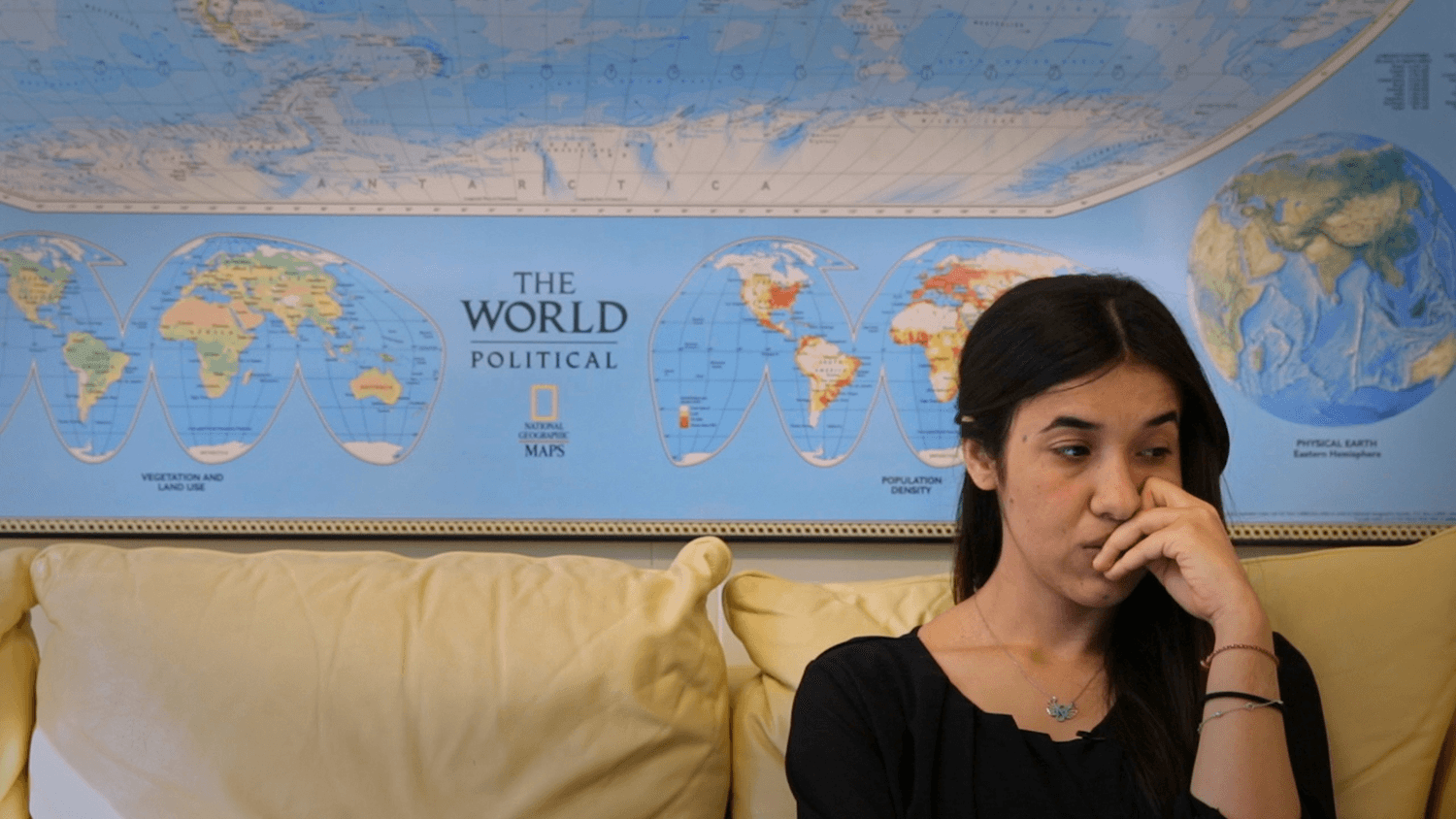 Talking with Bombach about the responsibility of taking on a story like this, it is clear that she has given a great deal of herself to make this film. Once she met Murad, the filmmaker felt she had no choice but to give all she had to the project. Directing, shooting and editing gave her the complete control that she felt she needed to find the details, coax out the deeper themes, and avoid sensationalizing her story.

Particularly telling is Bombach's approach to translation. Murad speaks in a combination of two Kurdish dialects and Arabic. Finding quality translators was a challenge. However, Bombach insisted on a thorough multi-step process. She sat with the translator, going over footage in detail, then double-checked those transcripts, and had the final subtitles checked again.

This extreme attention to detail is apparent in every moment of On Her Shoulders. The result is a kind of deep storytelling that the mass media is not capable of and not interested in. Rigor, accuracy and attention to detail are necessary when telling a story of this gravity—but they are not sufficient.

In scene after scene, we see how everyone wants something from Murad: a photo, a speech, solace. Filmmakers also want something from our subjects. We want emotion. We want drama. We want a story. Audience members want something as well. They want clarity. They want a good guy to champion and a bad guy to blame. They want hope that there are solutions to these problems. It can be shockingly easy to succumb to these tropes as a filmmaker. Though not as painful as the sensationalistic interviews sought by broadcasters, this is a different kind of objectification and would also be an injustice to Murad's story.

Bombach crafts a story that at once provides the things we crave as viewers, but also denies us easy answers. Murad is a source of hope in the sense that we see in her human resilience. However, she is not stood up to falsely represent a hopeful future for her people. Murad is paying a price for her activism, and she is not guaranteed to succeed. We can choose to look away from Murad, but Bombach refuses to let us use her for a cheap dose of hope.

The culmination of the film is Murad's speech to the UN General Assembly. Again, she looks directly into the camera. She is talking to the leaders of the world, and directly to the audience when she details the plight of her people and asks, "When will you be moved?"

After the screening I attended, one audience member asked, "How did she escape her captors?" Bombach answered briefly and suggested that the audience read Murad’s book about her experience. She later told me that questions like these disappoint her. Even after seeing the film and hearing Murad, audiences still seem fixated on the more sensational details. The question she did not get is, "How can we, as Americans, help the Yazidi people?"

On Her Shoulders is a film about an activist, but it is not an activist film. In comparison, a film with a clear "message" or call to action is an easy way out. Bombach makes us face the fact that no action is sufficient. The politicians, the media, the activists, the filmmakers and the audiences—we are all failing to prevent the horrors of genocide. To bring out this unvarnished truth is the most honest filmmaking possible. However, it is still not a solution, and On Her Shoulders does not pretend to be one.

On Her Shoulders opens in theaters October 19 in New York City and October 26 in Los Angeles, through Oscilloscope Laboratories.

Jason Osder is the director of the award-winning documentary Let the Fire Burn, about the 1985 confrontation between the group MOVE and the Philadelphia police that claimed the lives of 11 people. He is also assistant professor of media and public affairs at George Washington University.