How to Build a Community: The D-Word Turns 20 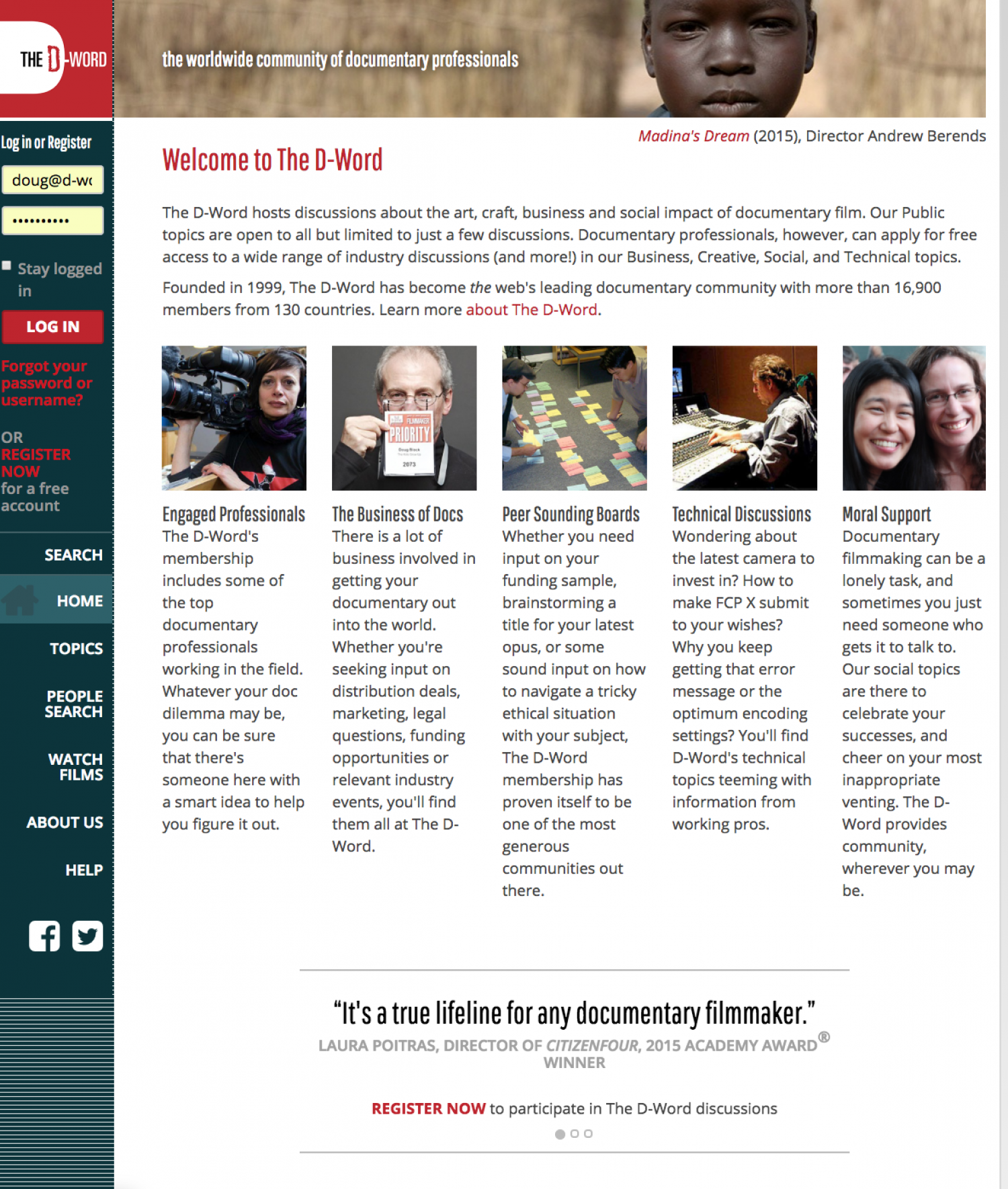 While making his 1999 documentary Home Page, which documents the emerging culture of the Internet through one of its wunderkinds, 21-year-old blogger Justin Hall, Doug Block followed Hall’s lead and started a personal blog himself. That blog, which Block named The D-Word, would transform over the next two decades into a vital global online community of 17,000 members in 130 countries, where filmmakers offer each other advice, feedback, support, contacts, ideas and refuge.

The history of The D-Word is woven with stories of filmmakers helping their peers. That is entirely intentional. “The mission was always a discussion forum and community for documentary professionals from around the world, and it was always meant to be global,” Block explains. ”It was meant to just be a forum where we could discuss our issues, get advice, give advice, support each other at work, become friends and colleagues.”

It occurred to Block that “documentary filmmakers would make such a great virtual community. We work in real isolation. Here I am living in Manhattan in New York City, and I still feel really isolated making film. Imagine people in suburbs or the country, how isolated they must feel.”

Block is an active D-Word member and one of five Co-Hosts who moderate forums on the site. “I love going into a topic and see you're talking to somebody from Australia or they're from some small town in Texas. Or, if the two are talking to each other. It's so gratifying.”

“Every day I get people who are registering The D-Word and you see where they're from and how they heard about it,” Block continues. “It's almost always word-of-mouth, a colleague from Desktop Documentaries, from an article in IndieWire or Filmmaker, from their boss at work, or from a producer they're working for.”

The site hosts weeklong discussions on provocative topics and live-blogging from major festivals and markets. The conversations are threaded by topic, and there’s also a list of the latest members to join.

Filmmaker Marjan Safinia is a D-Word Co-Host, as well as a former IDA Board President. When Safinia first joined The D-Word around 2001, the community was already active. She read through the backlog of posts and realized The D-Word’s significance. “There was both an ability for me on my own time to sift back through stuff, and just read and learn, but also to connect with this really vibrant community now,” Safinia says. “It was very compelling to me that there was a lot of folks, quite experienced folks, kind of ‘name’ filmmakers who were just incredibly generous of spirit on the site. What I really liked about The D-Word is it felt like when you're at a really good house party, and you wander into the kitchen. There are all these folks, and all these different little conversations.”

Safinia’s is an excellent case study in D-Word usage: “I went to events as an active participant, asking and contributing and commenting, but also really sort of reading back. And then very, very quickly, the seeds started to kind of fall into place in front of me. Any question that I had, within an hour, somebody would answer it for me.” Ultimately, she noted, “It became a community for me. These are real friendships and real relationships that you have with each other, and then you also get to meet occasionally, in the real world, and you have a ‘pack’ to move around the space with.”

The community has experienced some exceptional moments together, and the site’s profound impact on the lives of its members is one thing that makes it so unique. The group grieves together when a member passes away. When the moment calls for it, they’ll also band together to help free a D-Worder from prison.

Prison extraction is an extreme example of the community’s care for each other. More often, D-Worders are helping each other with their work. Safinia has seen members post things like, “‘I have eight hours until my submission deadline and I can't seem to nail this synopsis. Anyone got any thoughts?’ And literally people will stop what they're doing and workshop this bad synopsis for them. Or you'll put up a little cut, and people will give you instant feedback. It’s this really remarkable kind of thing that just didn’t exist anywhere else before The D-Word.”

The site serves other communities. Groups that share culture and identity can meet and amplify their work on The D-Word. Safinia said this has inspired The D-Word to ask questions about its future. “Not only is there Facebook, but now there are all these other kinds of groups, like Brown Girls Doc Mafia, or A-Doc, or other affinity groups. How is that shifting the nature of The D-Word? Without breaking something that really works, how can we also think about what else can The D-Word be, apart from just a place to have conversations?”

Block agrees and maintains that facilitating more in-person meetings is a priority. Moving from conversation to action makes a difference.

Safinia explains that The D-Word team is investigating the question, “How can The D-Word be like an organizing mechanism to create physical community in some of those places where it's harder to come by? It’s not hard for me to go out and find 20 documentary filmmakers to have a drink with [in Los Angeles]. But that is harder if you're somewhere else.”

There’s overlap in The D-Word and IDA communities, which means the institutions—and their members—may remain in dialogue. After an IDA event, discussions can continue online.

“The D-Word can be a real ally to IDA in continuing those conversations,” providing space between in-person events to connect, Safinia notes, adding that there’s an opportunity at this organizational intersection to create a “more formal partnership around taking several of the topics from the last Getting Real [conference] and turning them into extended panels.”

The site’s live-blogging coverage of festivals is relatively new, and one that will continue. With the talents of live-bloggers like Eli Brown, The D-Word provides a valuable service for those who can’t attend major events, like Getting Real. The hope, Safinia says, is, “We're able to give you that feeling that you can be in the room and hear the richness of the conversation.”

The D-Word also plans to spotlight international members and continues to help regional members connect, since, Block maintains, “The goal is for them to create their own community in that region.”

With its robust membership and meaningful impacts, The D-Word’s 20th anniversary is best celebrated by returning to the film that led to its creation, Home Page, and on Tuesday, March 19, IDA and The D-Word will host a special screening at 8:00 p.m. at the Linwood Dunn Theater/Pickford Center for Motion Picture Study on Vine in Hollywood, followed by a Q&A with Block and the film’s subject Justin Hall, moderated by Safinia. Prior to the screening, there will be an informal gathering of D-Word and IDA members and their guests at 800 Degrees, just down the street from the Pickford. For more information on the evening, click here.

Home Page will also have an April re-release on DVD and, of course, online.

Block reflects, “I make more personal films about family stories and relationship stories that I want to be timeless and universal and be every bit as effective ten years from now as the day it was released. Or in the case of Home Page, 20 years on, it's far more relevant than it was 20 years ago.”

The same could be said about The D-Word and its value to the documentary community.

END_OF_DOCUMENT_TOKEN_TO_BE_REPLACED

A Doc Community Thrives Among Dot-Com Survivors: The D-Word, Doculink and MediaRights.org

'Home' on the Web: The Tale of an Digital Distribution Pioneer