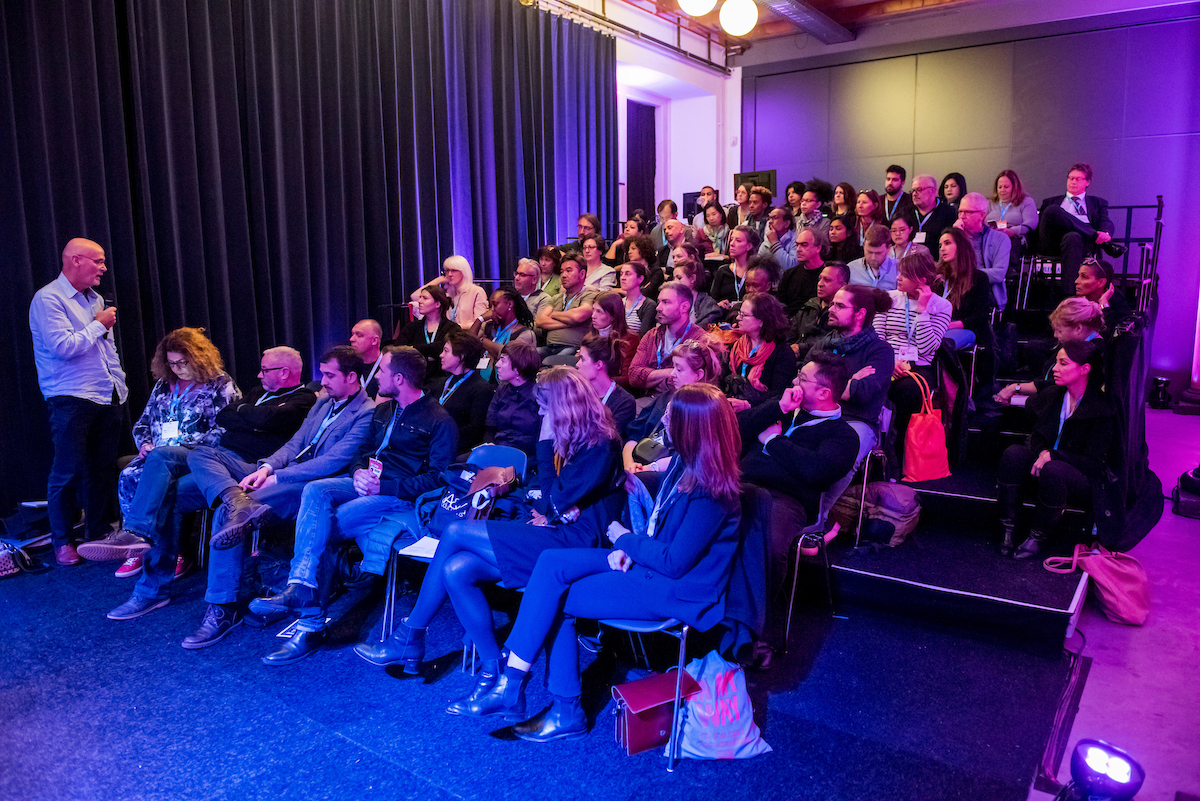 Editor's Note: Although I did not attend the summit, my colleagues Simon Kilmurry and Claire Aguilar did. This report is based on the very thorough transcription by Abigail Prade of IDFA. I thank her for providing it to us.

In an unprecedented convening of documentary advocacy organizations from around the world, IDA, working in concert with Israeli Documentary Filmmakers Forum and International Documentary FilmFestival Amsterdam (IDFA), spearheaded a summit of 40 leaders to start the conversation about the issues that the global community is grappling with. The summit, entitled Building Networks Across Borders, took place at the Compagnietheater in Amsterdam, during the festival.

Following a welcome from Adriek van Niewhuijzen, IDFA's head of industry, IDA Executive Director Simon Kilmurry thanked Osnat Trabelsi of the Israeli Documentary Filmmakers Forum for suggesting the idea for the convening; IDA Director of Programming & Policy Claire Aguilar explained that the Israeli government "was going to take over one of their broadcasters. It started a crisis, in which the main concern of sustainability of the producer and the sustainability of the producer in relation to public media was challenged."

"We need to leverage systematically how we can support each other," Kilmurry added. "I hope this is the beginning of a field-wide conversation among us to share the difficulties we are facing and try to make it better."

With that, Aguilar solicited introductions from each attendee, asking them to discuss the challenges they're facing.

Funding and sustainability were common refrains across the board, as were security and safety for filmmakers and NGOs amid government encroachment; access to resources for filmmakers not based in the US or Europe; opportunities for independent producers; and changing distribution models.

Francesco Tocci of Italian Association of Independent TV Producers cited a new law that would minimize funding for networks, while Thereza Simikova of East Doc Platform in Eastern Europe pointed out that "broadcasters that normally come to our countries to collaborate and finance films have less money to spend and are hesitant to collaborate with countries and territories that are not proven and established. This is all happening right now at a time when we have very urgent stories to tell due to the proximity to Russia."

Elaborating on the political climate in the region, Simikova noted the rise of nationalism and populism and the concurrent threats to freedom of speech and culture. Mariana Oliva of Doc Sao Paolo and Doc Montevideo also cited censorship and the fragile state of democracy in Brazil, which has led to self-censorship in some cases. Debra Zimmerman of New York-based Women Make Movies talked about the perilous state of democracy and women's rights in Trump-Era America. "Last year we had a meeting here at IDFA about the status of women filmmakers in film festivals," she explained. "It's still very far from any equality. There are certain things that are really important that are happening right now in the documentary world that are ways to exclude women once again. As we get into the world of multi-million-dollar documentaries funded by digital platforms, we see more and more films by dominant culture—specifically by white-dominant male culture. Part of what we try to do is really make sure that women are in the pipeline. And that pipeline seems in some ways to get fatter at the bottom and narrower at the top." Loira Limbal of US-based Firelight Media added, "We're in a bit of a post-truth moment, where there is a backlash against progressive ideals. My concern is in a country where there are already issues regarding inequality and marginalization of our communities, what does this climate then mean for artists from our community? We believe that the voices from our community should be leading the resistance, but also who we can become as a nation."

Things are far worse in Turkey, as Serra Ciliv of New Film Fund Turkey discussed the Ankara governor's ban on "everything LGBTQ related – panels, screenings, poetry readings, anything….It goes to show what direction they are heading in." Ciliv pointed out that the head of board of their partner institution was detained for a month. "It's scary and challenging that we need to come up with new words, new strategies and new collaborations, ways of communication," Ciliv said.

In response to this crackdown, Trabelsi proposed that the de facto coalition craft a statement of solidarity on behalf of the international documentary community to the governor of Ankara. Ciliv responded with enthusiasm, clarifying that the issue was not only about LGBTQ concerns, but also about arts and culture.

Tom Roberts of Directors UK concluded the meeting by citing a Turkish leaflet about documentary: "…Documentary film directly increases society's capacity to read, bear witness to its history, its ability to influence and lead with knowledge and creativity in response to the end of truth. And its capacity to foresee a constructive future…" Following Trabelsi's proposal, Roberts suggested that the conveners construct a statement that articulates "the importance of documentary culturally, socially and progressively… It would be very useful as a way to say this is what we are about."

END_OF_DOCUMENT_TOKEN_TO_BE_REPLACED

Those 'Dam Docs!: IDFA is the Gold Standard for Nonfiction Festivals