IDFA at 30: Sounding the Alarm and Creating Resistance 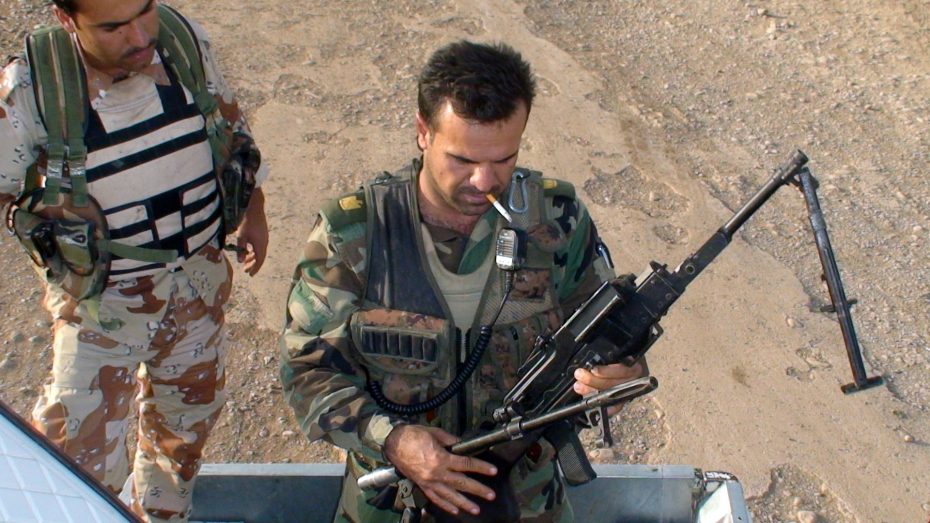 The 30th edition of the International Documentary Festival in Amsterdam (IDFA) was nonstop information overload, in a good way. The events were punctuated by rounds of celebration for founder Ally Derks, who stepped down this year. She is a beloved figure world-wide in the documentary world for her ability to build community, and build opportunity for all.

IDFA has become a multi-functional international institution, setting trends in field-building, including:

Stalin and Nazis Are Back

IDFA tends to refract global issues creatively, and the mood this year was somewhere between disillusioned and apocalyptic, from films to interactives to discussions and upcoming projects. Several films featured extreme right-wing political movements. Golden Dawn Girls, by Norwegian Håvard Bustnes, tracks the fortunes of three women—the mother, daughter and wife, respectively of leaders of the neo-Nazi Greek party that has become the third-largest political party in the Greek government. When their men are arrested, each steps into political leadership, enthusiastically embracing the Protocols of the Elders of Zion, anti-immigrant anger and contempt for the democratic process. The film's arc ends with a celebration of the men’s return, featuring an eye-popping moment that deserves to be seen to be believed. The Dutch film The Red Soul, by Jessica Gorter, tracks the return of Stalin as a hero in Russia; young and old alike seem to have found his good points.

Other films, some of them part of a special focus on Arab filmmaking, portrayed the human cost of political calamity. Two of them used a traditional cinéma vérité technique. Egyptian Mohamed Siam's Amal, the festival opener, tells the story of the Arab Spring's collapse by following a 14-year-old who ferociously and recklessly joined the revolt through the next five years of her life, through adolescence, love and disillusionment. It's a powerful story on many levels; it's a girl's story, and the story of a generation, a political movement and a nation. Syrian Talal Derki, who previously opened IDFA with Return to Homs, this year brought Of Fathers and Sons. Derki is now looking at the next generation of war. He follows a Jabhat al-Nusra extremist who is lovingly raising his sons to become religious warriors. (Derki had to represent himself as a believer to do so, and wrestled with the decision until he decided that the story was too important not to tell.) We watch the preparation and sendoff of one of them to war, at the age of 11, and track another who's not quite measuring up—he likes math. Mexican Everardo Gonzalez brought Devil's Freedom, which had debuted at Berlin. In a justly celebrated work bringing visual and auditory poetry to bear on the topic, he immerses viewers in the haunting, searing personal experience of violence to self, family, society and the future of the nation.

Alarm and foreboding pervaded the wide range of interactive projects. Greenland Melting was FRONTLINE's contribution to gloom on climate change; you could take a high-tech VR trip to Greenland to watch the glaciers disappear before our eyes. Poppy Interactive, a Dutch work that draws on decades of Middle East reporting to terrifyingly connect the dots—literally—between war, terrorism and trade in drugs and guns. Anagram's I Swear to Tell the Truth plugs listeners into audio that takes them into a walk around the neighborhood to encounter and engage in fake news-making. And look for more dark documentary interactivity. Michèle Stephenson and Joe Brewster (American Promise) are working on a VR project about the long and ongoing American experience of racial terror, using Bryan Stevenson's words: "Slavery never ended, it has just evolved." At DocLab's Interactive Preservation meeting, experts noted that interactive's early generations have rarely been preserved at all. Indeed, VR currently is so difficult even to imagine being preserved that it might not be a good candidate as they try to decide what to rescue.

The DocLab conference used the well-known graphic of technological evolution to probe participants' mood. Most thought they were either in the Trough of Disillusion or recovering from it, with a hangover, on the Slope of Enlightenment. Apparently, one way to escape disillusion in digital interactivity is to return to analog. Thus, Lauren McCarthy uses the Internet of Things in her home to give guests a remote experience of her high-touch help waking them up. As Jonathan Harris announced in his keynote speech, he has found that life is the medium for art, and encouraged everyone to go outdoors. Comedian Micha Wertheim experimented with phoning his public performance in via robot, and found out that in-person is better.

Some films featured the quiet heroism of hewing to humanist values in bleak times. Serbian filmmaker Mila Turajlic's The Other Side of Everything won the IDFA Award for Best Feature-Length Documentary (all IDFA awards bring cash prizes). Turajlic's intensely personal documentary about her famous activist mother's nonstop support for democratic politics—throughout a life where nary a victory has been won—is a cross-generational statement about hope in face of despair. Her mother, Srbijanka Turajlic, came to IDFA, unflappable and amused, and it was my personal best IDFA moment when I got to meet her at Guest Meets Guest. Julia Bacha's Naila and the Uprising unpretentiously and gracefully profiles a Palestinian woman who has openly resisted Israeli occupation since the 1987 intifada. She's similarly unflappable, and similarly clear about the ordinary decency of her demands.

The Deminer, by Kurdish filmmakers Hogir Hirori (who grew up in Sweden) and Shinwar Kamal, portrays Fakhir, a Kurdish Iraqi military man who defuses the ubiquitous mines set by religious militants. He's trying to spare the lives of other Iraqis. "If I die, one person dies, but if I leave the mine, many people die," he asserts in the film. The Deminer, tightly edited for suspense, features extraordinary imagery of Fakhir's courageous, highly dangerous expert work. Fakhir's courage and care is echoed by the filmmakers, especially Kamal, who accompanied him on his demining forays. The film won the IDFA Special Jury Award for Feature-Length Documentary.

The winner of the Amsterdam Human Rights Award was Piripkura, by Brazilian filmmakers Renata Terra, Bruno Jorge and Mariana Oliva. With cinéma vérité patience, the film follows indigenous-rights workers on a journey to contact and give medical aid to two isolated men who seem to be the last of their group still living in the forest. The expedition head and the two middle-aged native men, who benevolently tolerate the Brazilians' interest, are all winsome characters, and the film is heart-warming. But without context, it may be easy to misread the film as an elegy to dying indigenous cultures. In fact, Brazilian Amazon indigenous peoples have made remarkable gains in recent decades. More than 20 percent of the Brazilian Amazon is now officially indigenous territory, and is home to more than 200 societies. Most have some contact with Brazilian society, and some are reasserting their languages and cultural traditions.

Of course, nothing could squelch the expectations of makers to make connections, find funding and launch the next project. As well, IDFA is conversation-rich, unpredictable and thought-provoking. Barbara Kopple's A Murder in Mansfield prompted Danielle Beverly, who is leading a film-school initiative at Northwestern University in Qatar, to wonder about the popularity of true-crime documentary. NYU filmmaker-professor Marco Williams found that Joe Berlinger's Intent to Destroy, a making-of about a fiction film on the Armenian genocide, opened up a world of questions for him about representing atrocity. Arab filmmakers exchanged opinions about the challenges of pitching to European broadcasters and feeling like beggars at a feast. Syrian Diana El Jeiroudi said she hated pitching in Europe: "I resist being squeezed into a drawer, reporting artistically to a European audience," she said. Moderator Rasha Salti, based in Beirut, noted wryly in response, "But at least you're not alone. If you're Congolese or Bulgarian, they have the same problem as us. We're all in the Republic of Silence. It's up to us to explain ourselves."

And then there are the comments in passing, as IDFA goers move from one informational feast to another. Here are several I'll take home with me:

“IDFA is the ball, for a Cinderella from Belarus.”
—Anastasiya Miroshnichenko, first-time director of Debut, a Belarus film of staging of a play inside a women's prison.

"Our real question is, How do we move beyond empathy to build solidarity?"
—South African legal activist Nurina Ally, on social-issue documentaries

END_OF_DOCUMENT_TOKEN_TO_BE_REPLACED

Docs That Make Us Think Social Action at IDFA

Those 'Dam Docs!: IDFA is the Gold Standard for Nonfiction Festivals