Liberation Isn't Something That We Arrive At 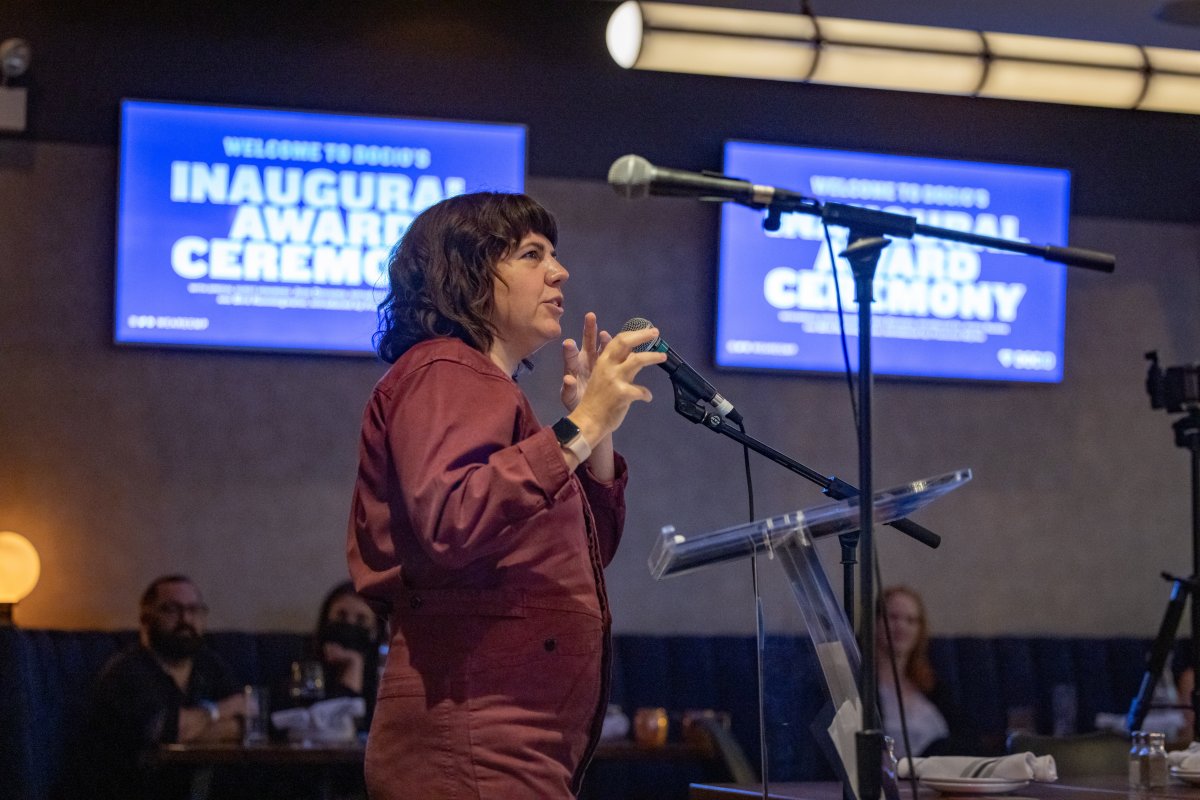 Editors’ Note: Doc10 is Chicago's only all-documentary film festival and this year, the festival honored filmmaker Jessica Devaney with its inaugural Vanguard Award, for being “at the forefront of creating and cultivating innovative and important documentary filmmaking.”
We are grateful that Devaney shared her acceptance speech with us. And a very special thanks to our friends at Doc 10.
The speech has been edited for length and clarity.

When I first heard the name of this award, I thought, That's a lot to bite off… a “Vanguard Award”—what does that mean? As I sat with it for a little bit, I thought of what the word “vanguard” means to me as a queer person and what the queer lens and experience offers society—pushing the boundaries of what we think is possible, whether that’s in our politics, or our love, or our communities. When I think about my queerness and queerness in general, there is this inherent futurism that is both born out of our survival and resilience. I receive this award as a kind of accountability, pointing back to that spirit and continuing to show up to that special imagination for a future that centers liberation.

The production company I founded, Multitude Films, has grown into a team of 11 committed people who make it a lot easier for me to get out of bed in the morning—especially when the industry is fluctuating—from a business perspective, politically, and all the ways we all know. To be honored for an award like this is really to honor the work of our whole team—their creativity, integrity, their muscle, their labor. Making this work is real labor.

When I was starting Multitude Films, I was an independent producer figuring out how to produce a couple films at a time. At first, I just wanted to build something—in part, to have a community because the emotional labor of producing was so challenging that I just needed people around me to share that with. As I started to better understand structural dynamics in the industry, I realized that building something like Multitude Films could also be a way of making particular interventions that would provide a path for the kinds of films and filmmakers that we want to support at Multitude. So we built the company on a hybrid model: We’re a traditional production company, and we have a fiscal sponsorship and receive philanthropic support from a number of key partners such as Perspective Fund, Dorot Foundation, Acton Family Giving, and Dobkin Family Foundation. This support allows us to work in very early stages with emerging talented directors and to shepherd those films—filling the gap between the mentorship programs and the market, which very much sees emerging underrepresented directors and films as risky.

There’s a lot of focus on institution-building right now in the industry, which is both an important pivot from this film-by-film model and at the same time, puts pressure on individual producers to build the kind of infrastructure that not everyone wants to or is suited to build. And so I say: I want us to be careful. We tend to be a pendulum-swinging kind of field, and I guess humans in general tend to be that way too. We need to not just be turned towards institution-building, but to
ask, What are the kinds of institutions that create a healthy and sustainable field for people? And, how do we also let artists who want to be operating independently have meaningful ways to sustain those careers? 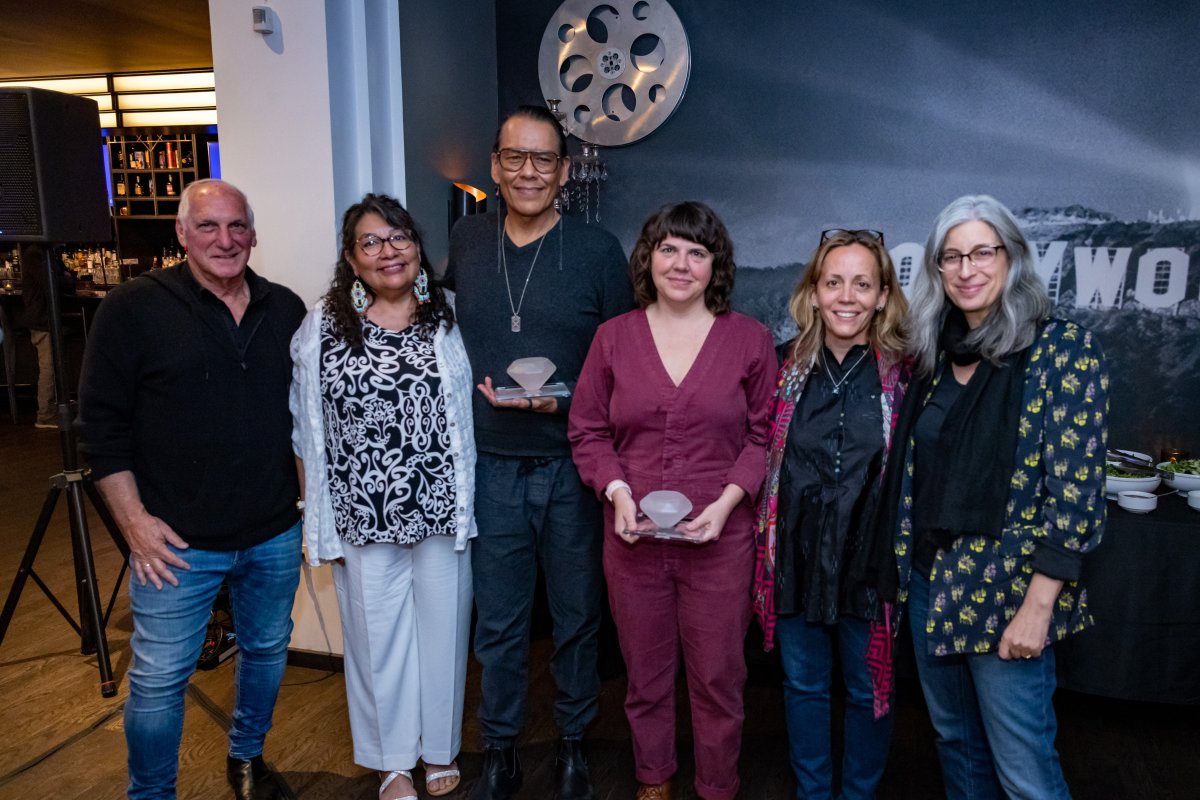 Right now, as I speak to you this evening, we’re looking at the model of what Multitude is. Multitude isn’t a queer company, but its ethos is definitely rooted in a very particular political queer milieu that is centered around liberation. I think some of that is partly because I grew up super evangelical. I was a little evangelical baby gay, out training kids at the Heritage Foundation, who, in the early 2000s, ultimately discovered a wider, gayer world out there. It was exactly that liberatory framework that I was looking for in this religious community, and I found in the queer community instead: a real, authentic manifestation of what acceptance and liberation could look like this, was very formative for me.

When I look at queerness from that perspective, it’s as much a political orientation as it is about our love. We’re talking about love and rights, and all these things are very important, but it’s more than just who we’re in relationships with. And to us in this room tonight and in our wider industry, I see a lot of allies, folks we see as pretty like-minded. Most folks in the documentary industry would identify somewhere in the liberal-to-progressive part of the political spectrum, with a couple more radical folks peppered in. In some ways, that foundation offers us a solid starting place for centering liberation. In other ways, it can prevent us from making pathways toward liberation because we tend to look outward for change rather than inward, at ourselves and our immediate circles. For me, inward is my company Multitude Films, documentary producers, or myself. As an industry, we’ve had a lot of necessary conversations around authorship, marginalization of BIPOC voices, anti-Black racism, Indigenous visibility, labor rights, and Islamophobia; and we tend to look toward education and knowledge as a solution to those things, which is a very liberal approach to dealing with structural power issues and oppression.

I want to take this moment and this award as a reminder for myself to continue on with the spirit of accountability and humility, to understand that liberation isn’t something that we arrive at. We don’t untie and dismantle white supremacy and homophobia and sexism and patriarchy and all of the modes of domination, and then arrive…and then we’re done with it. It’s a constant and lifelong process, and I would like to rely on you all in this room to hold me accountable in those
ways. I would like us all to also show up with a spirit of curiosity and humility when it comes to that. So for me, this moment is about standing up in front of all of you all as I receive this Vanguard Award and saying, You know, I don’t have that all figured out. There’s a lot of that work I’m still doing, and I hope that we can keep doing it together.

Jessica Devaney is the founder and president of Multitude Films, a LGBTQ and women-led production company known for Pray Away, Call Center Blues, Always in Season, and The Feeling of Being Watched, among others. She founded QueerDoc and co-founded the Queer Producers Network.