AUTHOR'S NOTE: It is with a heavy heart that we announce Alice Herz Sommer's passing at the age of 110 on Sunday, February 23, 2014. My interview with director Malcolm Clarke was conducted on Tuesday, February 4, 2014. Alice was in good health and knew about the film's nomination for Oscar®.

At 109, Alice Herz Sommer is the world's oldest pianist…and its oldest Holocaust survivor. At the heart of her remarkable story of courage and endurance is her passion for music.

We spoke to director Malcolm Clarke over the phone about the making of his Academy Award-nominated documentary short, The Lady in Number 6: Music Saved My Life.

Documentary: How did you meet your subject, Alice Sommer? What was that first meeting like for you?

Malcolm Clarke: I had resisted meeting Alice for a very, very long time, and actually did not want to meet her. The reason for that was that I had made a film about 10 years ago called Prisoner of Paradise. It was a film specifically about Kurt Gerron, who was a very famous film director and actor in Berlin in the 1930s. He was Jewish, and the Nazis of course destroyed his career. After running around Europe, he ended up in Theresienstadt, the concentration camp. When the Nazis discovered that he was in the camp, they had the bright idea of giving him a commission to make one more film: a propaganda film that would show the world what a wonderful place the concentration camps were.

It took me two years to make Prisoner of Paradise. For two years every day, I went into a cutting room and looked at Holocaust material. And I had enough of it. I was pleased with the film, but at the end the last thing I wanted to do was to ever go near the Holocaust again.

As many documentary makers will attest, if you do something relatively well, people say, "Well, could you do another one of those, please? Could you make another Holocaust film?" I was asked by a friend of mine if I would be interested in making a film about a lady who lived in London called Alice Sommer, who oddly enough had also been in Theresienstadt.

It took my friend a full three years to persuade me to go to London and meet Alice. I was asked if I would mind going to just have a cup of tea, and I relented. And an hour later, I left her apartment knowing that it was absolutely a film that needed to be made; that it was not in any way, shape or form a Holocaust film. It was a lot more than that. And she is a lot more than that. Although, the Holocaust is certainly something which is hugely important in her life because it forged who she became after the war. I think the film is a study of an absolutely remarkable human being who certainly survived the Holocaust, thank heavens, but it’s clearly a film which has wider scope and much more to say that just a traditional Holocaust film.

D: Given that Alice is of such advanced age, did that bring on a certain urgency once you decided you wanted to tell this story?

MC: Totally. It’s soon going to be difficult—if not impossible—to make films with firsthand witnesses to the Holocaust because people are dying off every year. Certainly, ten years after making Prisoner of Paradise, there’s probably only five or 10 percent of the people in that film who are still alive. So it was very clear that if we were going to do this, we couldn’t wait. We had to do it quickly whilst she was healthy, whilst her mind was sharp.

Generally speaking, [when] you want to make a film, you figure out who’s going to finance it for you. You spend a lot of time raising funds. We had none of those decisions to make. We knew that if we were going to do it, we had to just get on and do it. So it was a film that was made gratis—nobody got paid. My team all somewhat reluctantly said, "If we’re going to do this, we just have to do it." And that’s what happened. Everyone gave their services free.

Alice is a gift for a documentary filmmaker. She is so special and so remarkable, there’s not an awful lot we needed to do other than let her be the person that she is. We created a framework for Alice to kind of show who she is and talk about what she believes in. It was a very emotional experience for us, and I hope for the people who watch the film. 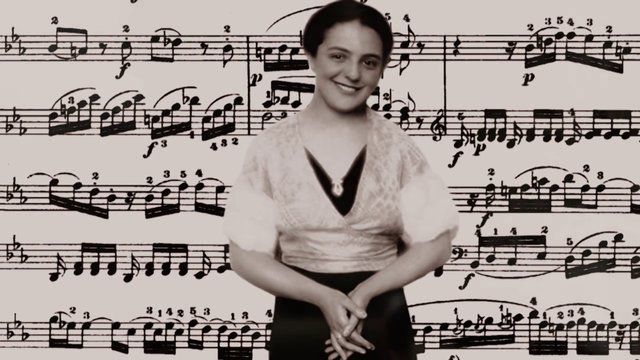 D: The nice thing is that it’s a very straightforward documentary style. There’s archival photographs worked in, and then it’s just spending time with her and allowing her to talk.

MC: I like to think that it’s a very understated film. It was very important for all of us that we didn’t have an audience be very conscious of the filmmaker. I didn’t want the heavy hand of the filmmaker to be present. So when you make something which is reticent [and] understated, it’s actually easy to be flashy; it’s easy to use all kinds of film tricks. The tough stuff is to stand back and have confidence that your subject is going to take you where she needs to take the audience. It was a big challenge, because we wanted to frame Alice with her two friends; the two friends are very important in the film, because they are the people that really deal with the Holocaust.

Alice was reticent because, in a sense, she’s moved on in a way that Anita and Zdenka, her two friends, have not. It was interesting to hear her say, “It’s not for me to talk about. They are much more authoritative. They feel more about it than me.” I don’t know whether the word transcendent in exactly correct, [but] she has transcended the Holocaust. And she’s drawn strength from it, basically by thinking about the good that she derives from the Holocaust. Believe me, I’ve spent a lot of time with people who went through that experience. I have never ever heard any other Holocaust survivor say, “In a sense, I’m glad that I was there. It’s made me stronger than other people.”

D: Her friend Zdenka at one point does say that she is somewhat grateful for that experience. It’s like Alice’s perspective has influenced others.

MC: Alice is a communicable disease. Alice’s optimism is infectious. You come away from Alice’s apartment, and it’s like being at a health spa, psychologically. She’s the best thing that can happen to you. She makes you feel fantastic.

D: You’re a filmmaker, so that’s obviously where your mind goes when you think about how to tell stories. There are several projects that are dedicated to highlighting Holocaust survivor experiences: there’s books, there’s been radio programs and whole museums dedicated to that topic. But I can understand why Alice is just so fit for the medium of documentary film.

MC: As I’ve said, I met maybe hundreds of Holocaust survivors during that period that we were researching and making Prisoner of Paradise. I never met anyone close to her. The reason I wanted to make The Lady in Number 6 was because I realized that it was not going to be a Holocaust film.

She was an extraordinary woman. She grew up in an extraordinary house in an amazing environment: going for walks in the park with Franz Kafka, sitting on the knee of Gustav Mahler who came over to tea on a Sunday afternoon. I think it was Thomas Aquinas who coined the phrase, "Give us a boy for the first seven years, and we will give you the man." I think Alice was definitely formed during those early years. I don’t think she’s changed a bit in over 100 years. Who she was when she was seven is exactly who she is today.

D: I was curious what the reaction to this film has been from other survivors, and if you can speak more broadly about festival reception or other public screenings. How have people digested and interacted with the film?

MC: I can certainly speak about other Holocaust survivors because my producing colleague Fred Bohbot and I went to the Montreal Holocaust Museum just the other night for a screening. It was a packed house of many Jewish people. There were Holocaust survivors on the panel, sitting with us. I think we can safely say that they were kind of blown away by her. People were very moved. It was definitely a very emotional evening.

It’s just opened in Montreal in a small arthouse cinema, and we were there the other night. That was a general audience; it wasn’t a particularly Jewish audience. It played marvelously. I have two kids who are 13 and 14—they had never seen the film before and they were really, really moved by it. They were genuinely interested in the story, interested in the history, interested in what an odd and extraordinary lady she was.

The interesting thing about this film—it’s very hard to be cynical about it. Frederic and Nicolas and I, all to some extent, because we worked so hard on the material, we’re all a little bit bewildered by the reaction because it is so positive. If you see this stuff every day, you tend to get a little bit inured by it. You start to have a little bit of a thick skin. Frederic and I watched the film together at the Holocaust Museum, and neither of us had seen it for many months. So for the first time probably ever, we actually sat and watched it as an audience, as two participants in a movie theater just watching a film. We just watched it as a piece of education and a piece of entertainment, and a piece of emotional theater. And on that level it worked.

D: Are there any filmmakers who have inspired you throughout their career? Has some of their style—or some of the style that you employed in your first feature about Holocaust survivors—informed any of the aesthetic choices on this project?

I remember years ago, Werner Herzog made a film called The Great Ecstasy of Woodcarver Steiner, about a ski jumper. And it was almost a transcendental film about a guy whose passion was jumping off mountains on a set of skis. Incredibly inspiring just because he chose a great subject. I don’t always like Herzog’s films, but he is a brilliant chooser of subjects. It’s all about the choice of subject. If it is a fantastic subject, half the journey is accomplished, and then the filmmaker just has to frame the subject, really.

D: Any comments you would care to make about your nomination?

MC: All I can say is we’re all a little bit bewildered that it’s been as successful as it is. At the same time, I don’t want to sound disingenuous: we knew from Day 1 that this woman was remarkable. We knew that If we could just catch Alice’s lightning in a bottle then we had something a bit special. And thank goodness she loves people [and] she was excited by having us there. I think that’s one of the kind of takeaways from this film. We can all learn from old people and I think we forget that. And we can certainly all learn from Alice Sommer.

The Lady in Number 6: Music Saved My Life will be screening as part of IDA's annual DocuDay on Saturday, March 1, at 1:10 p.m. at the WGA Theater in Beverly Hills. Find out more and purchase tickets.