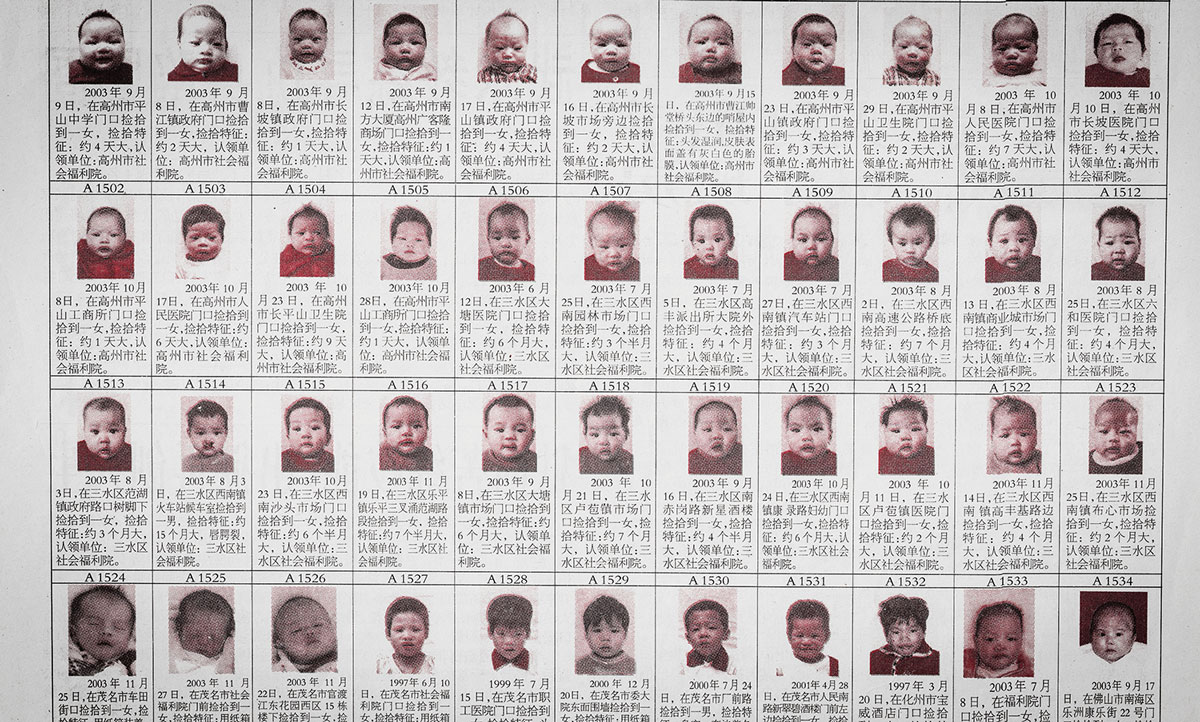 Co-directed by Nanfu Wang and Jialing Zhang, One Child Nation examines China’s One-Child Policy, coaxing confessions and revelations of drastic, profound depth from its subjects. Taken together, these wide-ranging first-hand accounts tell the era’s story, conveying its dark, emotional legacy in an astonishing film that is sure to contribute to the historical and cinematic record.

Enacted in 1979 and replaced with the “Two-Child Policy” in 2015, the One-Child Policy was a severe population-planning effort that limited the number of children parents could have. Its enforcers employed strategies like forced sterilization, abductions, destruction of personal property, compulsory abortions and infanticide, among others. The policy ultimately prevented births, ended lives, and left a seeming eternality of trauma in its wake.

Wang’s impulse to make the film coincided with two significant events—the end of the One-Child Policy and her pregnancy. Born in China, Wang grew up propagandized. She noticed that, at the conclusion of the One-Child Policy, China succeeded in proliferating a retroactive “positive narrative” in international media.

“Becoming a mother made me think of a lot of things, a lot of questions around [the policy],” Wang reflects. “I had never thought of it that way.” As she began researching the topic, she realized, “A lot of things I learned as a child were not necessarily true, and a lot of the propaganda that surrounded me, I didn’t recognize as propaganda. So it became urgent to document the policy and the consequences because I was afraid that if no one does that and years go by and this part of the history would be forever forgotten, then what is left would be what the authorities wanted people to remember.”

From this film’s array of shocking interviews, the interview with 84-year-old village midwife Huaru Yuan still resounds with Wang as the most stunning. “I asked the first question, ‘How many babies did you deliver in your career,” as a warm-up question,” Wang says, explaining she thought it would take time “to get to the deep, difficult questions. But I was shocked when she responded almost in a matter-of-fact way: ‘I don’t remember how many babies I delivered, but I do remember I performed 50,000 to 60,000 abortions.’

“That was a ‘Wow’ moment,” Wang continues. “I remember I felt…I was so punched by what she said. It just went even deeper from there: The guilt that she revealed, the trauma she suffered throughout her life. I think that interview also shifted the direction of the film a little bit. After we learned her story, and the [stories of] other officials, we realized the people carrying out the policy were equally traumatized by what they experienced and witnessed, just as victims who suffered the consequences. All of them were victims of the policy.”

Following the midwife interview, Wang and Zhang “wanted to explore more what exactly made people with conscience do such evil things and commit such atrocities? That became one of the questions we explore in the film. My co-director and I talked about how we want to edit and tell their part of the story, making sure no one would point the finger at them, saying, ‘These are evil monsters who would kill babies when they were born alive.’”

Rather, the film seeks to help the audience comprehend what led normal people to such acts.

“I think that’s much more complex,” Wang maintains. “It involves propaganda, indoctrination, and is much deeper, in a way. From there we also had a goal that we wanted to show all of [the interviewees], especially those who carried out the policy, with humanity and to make the audience empathize with them. And understand that it wasn’t their choice, it wasn’t their decision, and it also wasn’t them exclusively we should blame. It was about the empathy and sympathy we felt when we met those people. They were not monsters; they were nice people. And the way they dealt with their own guilt, trauma and pain—that really touched us.”

Wang’s point plays out powerfully in the film. It is tempting to dismiss these officials entirely, to create enough emotional distance between “us” and “them” to allow dehumanization of the dehumanizer. The film demands more of us than caricature, implicitly positing, “Are these humans all that different from me and you?”

Wang is the film’s editor as well as its co-director and co-cinematographer. After editing her first film out of “necessity” from budget constraints, Wang decided not to edit again. But she soon started “missing editing,” and eventually “realized I fell in love with editing. It was clear from the beginning [of making One Child Nation that I do want to edit, because I think especially with the film being so personal, from a first-person perspective, a lot of the editing is part of the directing, too.”

Wang’s editing process involves completing film segments during production, allowing responsive story development. “I always edit simultaneously to shooting, so every time we shoot for one trip, I would come back and edit that [into a sequence in the film],” she explains. “Then I’d see if it’s still the story that I anticipated. Has it changed? And where is it going now, from here? And after we have that and we go to the next shoot, I think about the direction of the film and where the story is going. Both the shooting and the editing was a discovery process, so it’s constantly readjusting; if this is what it’s about, or something has happened, something that during the interview or shoot changed the way I look at it. By the time the production is done, the assembly is also done.”

The 2019 US Documentary Grand Jury Prize winner at Sundance and an IDA Enterprise Documentary Fund grantee, One Child Nation offers a breathtaking cinematic reversal. Early in the film, the audience sees a baby (presumably) in utero. Later in the film, we realize the infant was only filmed to appear alive. In fact, the child is deceased and has been kept in formaldehyde, preserved by an activist-artist to evoke the period's shocking reality. In the film, the in-utero sequence is utterly convincing; when the preserved specimen is revealed, the effect is devastating.

“Before the shoot,” Wang explains, “we discussed how we want to film it, and we said, We want to film to make [the preserved infants] look like they were still alive. So the way we shot it is to use those images to remind people of life, instead of death. That was the main guideline how to frame it, how to light it, how to position it, what kind of shots to do. Once that’s agreed and decided, we just discussed the next step and how to achieve that. How to make them look alive. To remind people of the warmth of life, the beauty of life, we used a warm light, and did a lot of close-ups. Because of the liquid and the light’s warmth, it does look like a baby in the uterus.”

Wang’s goal for the film was visionary from its inception. It’s why she intends for One Child Nation to remain a reference for generations. “From the very beginning, even before we started shooting, throughout I had a goal: I wanted this film to be the film about the One-Child Policy that in 50 years, or even 100 years, or 500 if humankind still exists—anyone who wants to learn about the One-Child Policy, this will be the film they go to. Then they can watch it and learn what truly happened during those three decades.”

Ultimately, the film—in theaters August 9 through Amazon Studios—challenges its audience to remain proactive in the face of a dehumanizing policy perpetuated by deceitful propaganda. “It’s really dangerous to think that we know something, and to think that we know ‘the truth,’ behind something,” Wang asserts. “But often times if we don’t examine it, if we don’t reflect and question it, we might have mistaken the propaganda as the truth.”

Suz Curtis is a Los-Angeles based screenwriter of documentary and narrative films. She received her MFA in Screenwriting from UCLA and has written for Documentary magazine since 2014. @allthingssuz

END_OF_DOCUMENT_TOKEN_TO_BE_REPLACED

Up Against The Great Wall! Ai Weiwei Challenges China for Change

From Singapore with Love: Tan Pin Pin Brings Her Homeland to the Screen