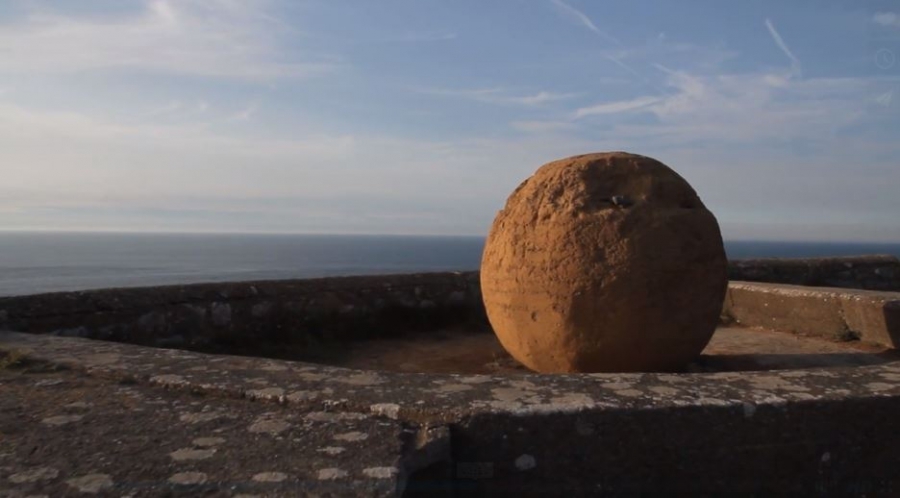 Sporting the new name SFFILM, the San Francisco International Film Festival celebrated its 60th birthday from April 5 to 19 at its usual haunts at the Castro Theatre, Alamo Drafthouse New Mission, Roxie and Victoria Theatres in San Francisco and the Pacific Film Archive at UC Berkeley. Three new venues - SF Museum of Modern Art, the Yerba Buena Center for the Arts and the Dolby Cinema - established a beachhead in the South of Market district. SFFILM's strong documentary section screened 35 features and some shorts, many of local Bay Area interest.

Thomas Riedelsheimer's Leaning into the Wind - Andy Goldsworthy, in its world premiere, rejoins the great British nature sculptor and land artist 16 years after the director's unforgettable Rivers and Tides. In his more recent works, several of which can be seen in San Francisco, Goldsworthy contemplates transience and growth as the human form blends into the earth. He is inspired by the human presence of The Presidio, the military installation-turned-national park whose history he unearths and celebrates, creating his art near an old lovers' lane, Spanish-era adobe walls and powder magazines. At one of my visits to his Presidio works on a sunny weekend, I was dismayed at the chaos and waste of plastic, food trucks and baby strollers - only to be comforted by the artist's constant reminders that nature absorbs us generation after generation into impermanence, and all this too shall pass, yet continue to grow.

Dolores, from Peter Bratt, about the life of United Farm Workers co-founder (along with César Chavez) Dolores Huerta, drew an adoring sellout crowd to the Castro Theatre, with Huerta herself in attendance, 87 years old and still actively promoting worker and immigrant rights. The film is a praise song to this tireless organizer unfairly neglected by posterity because of her gender and her defiance of traditional arrangements such as marriage - she was married twice, but had four of her 11 children in a common-law marriage with César's brother Richard. The film takes us from her childhood in Stockton, the heart of California's farmlands, to her association with organizer Fred Ross and César Chavez and national fame as a union activist, negotiating contracts with fruit and vegetable growers who cooperated and organizing boycotts against those who would not. She weathered tragedies such as the assassination of supporter and presidential candidate Robert Kennedy and her own near-death from the butt of a policeman's baton during a demonstration in San Francisco. Her keenest regret is that she wasn't there for her children, but they have grown up, having reconciled to, and even celebrated, the idea that she belongs to the people. Dolores won the Golden Gate Awards' Audience Award for Best Documentary Feature. The Castro screening welcomed home the Mission District's native son Peter Bratt, who directed his brother Benjamin in 2009's La Mission.

In its world premiere also before an adulatory audience at the Castro, Defender (Dirs.: Jim Choi and Jeff Adachi) celebrated another active Californian, San Francisco's Public Defender Jeff Adachi. How many public defenders are also documentary filmmakers? Adachi has made films about images of Asian masculinity and racism (The Slanted Screen; You Don't Know Jack: The Jack Soo Story). The topic of his short film The Ride gets expanded treatment in Defender: the case of Michael Smith, a 22-year-old African-American man on whom BART police used excessive force and then falsely accused of battery and resisting arrest. Smith's girlfriend suffered a miscarriage in the incident, all recorded by newly installed body cameras. This profile of one of the nation's few elected public defenders couldn't be timelier, as Adachi embodies his city's vow to provide sanctuary for immigrants under threat of deportation.

I saw Peter Nicks' The Force at a rush Victoria Theatre screening bristling with local documentarians and activists. The second in his planned trilogy on Oakland institutions - The Waiting Room, an acclaimed portrait of Highland Hospital's emergency room, was the first - this highly anticipated film is about recent crises in Oakland's police department. Sundance's Documentary Best Director prize-winning vérité portrait examines a force that was placed under federal oversight in 2002 for abuses going back many years, including brutality against groups like the Black Panthers (which was formed to resist that very abuse of power) and the Riders scandal. The short regime of Chief Sean Whent frames the chronology, proving his inability as an individual to prevent excesses such as a multi-agency sex scandal involving a minor. The film's refusal to identify a solution or savior for the troubled institution is both its strength and its tragic conclusion. Nicks' film also won the McBaine Bay Area Documentary Feature Award.

Long Strange Trip, the four-hour-long documentary history of the San Francisco-based musical monolith the Grateful Dead, screened before a packed Castro crowd of lively, colorful elders still mourning Jerry Garcia and protective of his posterity. To this viewer, who attended four Dead concerts in the 1970s and still never quite felt the magic, the film manages to communicate some sense of Garcia's charisma and artistic drive through his obsessed metaphor of Frankenstein's monster. It also explains the band's musical uniqueness, pioneering sound system, stalwart fan base and iconoclastic attitude toward taping concerts. But like The Force does with the OPD, the film stands by helplessly as it witnesses the band's center fall apart and hurl elements out with centrifugal force. At the post-screening Q&A, Garcia's girlfriend Brigid Meier, who curiously dominates the narrative of his love life in the film, thanked director Amir Bar-Lev for making a film that reconciled factions still feuding over the Dead legacy.

Mohammad Gorjestani's short film Happy Birthday Mario Woods pays tribute to Gwen Woods, the mother of Mario, who was just 26 when he was shot 21 times by San Francisco police in December 2015. Tending his grave and speaking at his memorial, she has taken up her life's purpose as his absent voice, representing a young man who was "not what they said" in news reports and the widely-seen video of a grainy, cringing figure surrounded by cops with their weapons drawn. This six-minute film follows commemorations of two other victims of police violence, Oscar Grant and Philando Castile, in "The Happy Birthday Project," produced by Even/Odd Films in collaboration with Ryan Coogler's Blackout for Human Rights and the Campaign for Black Male Achievement.

The action in Sabaah Folayan's Whose Streets? surrounds an officer-involved shooting of an unarmed black man not in the Bay Area but in Ferguson, Missouri. Still, the film's emphasis is on activism, which police shootings have roused all over the country. As a foil to the Black Lives Matter movement often demonized in mainstream media, this film shows the lesser-seen efforts of people of color trying to bring Officer Darren Wilson to account for his killing of Michael Brown and to reclaim their streets. Activism is messy, suggests the film - intimate relationships and children must be nurtured right alongside vigils, occupations and speeches for them to have any meaning.