True/False: The Most Welcoming and Most Radical of Festivals 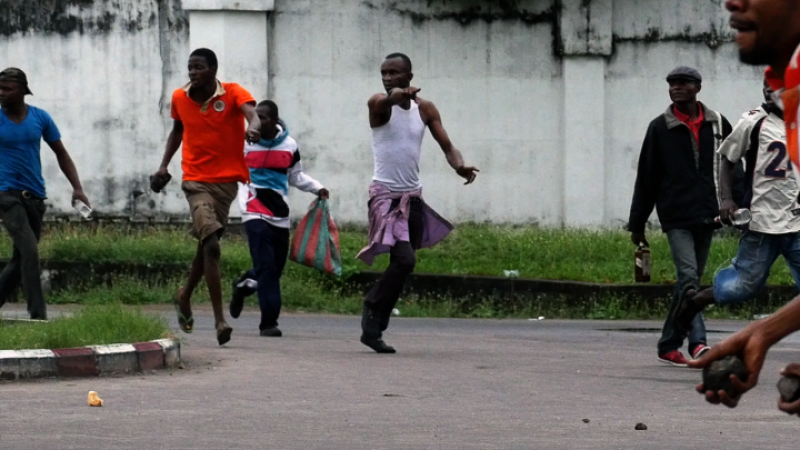 Now in its 15th year, Columbia, Missouri’s True/False Film Festival is widely recognized as the most prominent American showcase for documentary as a distinct art form. It does its best to treat docs as intentional works of cinema, temporarily sequestering them from concerns about market value and measurable "impact." Those who return year after year recognize True/False as somehow both the most welcoming and most radical of fests.

Despite a name that suggests a cavalier attitude towards truth, True/False might also be the festival most committed to the responsibilities and ramifications of documentary reality. The festival is as attentive to the needs of filmmakers as it is to the audience experience and the extra-diegetic life of the films' onscreen participants.

True/False programming strikes an almost ideal balance between curation—the most formally innovative Sundance doc premieres now generally show up a couple months later in Columbia—and discovery. This year, the programming team demonstrated not just an elastic conception of documentary, but the sense that they’re seeking projects from well beyond the festival circuit.

My time in Columbia began with a screening of Miles Lagoze’s Combat Obscura, a world premiere that came in as an unsolicited submission. An ex-Marine and current college student, Lagoze served as a combat cameraman in Afghanistan earlier this decade, tasked with collecting battlefield footage and interviews to be used as promotional and recruitment tools. Upon returning to civilian life, he revisited the footage and edited it into a mundane, disjointed and consistently shocking hour-long video diary that depicts weed-smoking, soccer-playing and targeted killing as all part of a day's work. It's a righteous act of re-assemblage, and almost unbearable to watch. 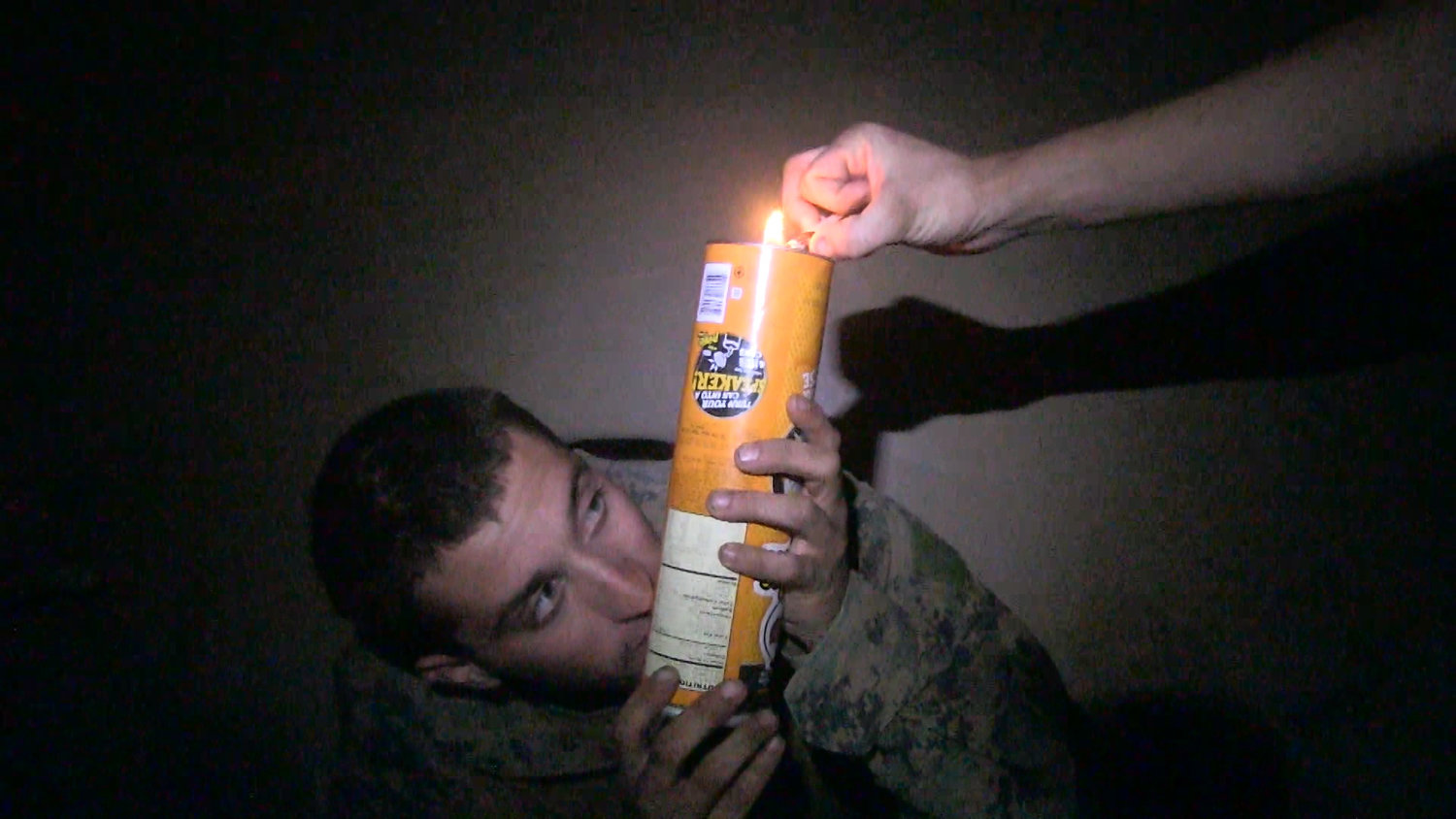 The film’s afterlife is up in the air. According to Task and Purpose, the Navy is investigating potential criminal activity caught on Lagoze’s camera, and the Marine Corps is determining whether it has proprietary ownership of the footage.

Somehow just as bleak as the Afghan battlefield was another T/F discovery, Rok Biček’s The Family. Opening with a head-on shot of the birth of a child, The Family follows more than a decade in the life of a Slovenian adolescent stumbling his way from one filial entanglement to another. It’s a chronicle of anguish and alienation, filmed in and among ugly domestic interiors and social services departments that evoke the work of the Dardenne brothers and the bureaucratic dark comedies of the Romanian New Wave. It's a sensitive and rigorous vérité film, unfolding in raw long takes and scrambling chronology to heighten the emotional highs and lows.

Screening as part of a shorts program, Cristina Haneș' António e Catarina chronicles a negotiation between the young woman filmmaker and her much older male subject, a magnetic but exasperating satyr who lives alone in a small Lisbon apartment. Over the course of three years, she visits him at night to film their conversations about desire and power, developing their entanglement into a sly and strangely moving exploration of domination and role-play. (Antonio and Catarina are not their real names, though they're not too far off.) Haneș deserves bonus points for expertly deflecting the post-screening questions of a man who felt unsettled by her apparent "exploitation" of her older subject’s desire.

The festival’s True Vision Award, given to an accomplished mid-career director, went to Congolese filmmaker Dieudo Hamadi. (At 34, he is the youngest director to receive the honor.) On the basis of his new Kinshasa Makambo, which had its US premiere in Columbia, Hamadi has an impressive command of present-tense documentary reporting. The film follows a small group of activists trying to end the reign of President Joseph Kabila, who has suspended presidential elections several times and has refused to concede power. Staying in close proximity to the activists, Hamadi captures the immediacy of political protest and ideological struggle without sacrificing careful shot composition and a suggestive use of offscreen space.

Kinshasa Makambo is an energetic testament to courageous (and sometimes deadly) dissent that may not move the political needle. It concludes with a title card informing viewers that presidential elections were delayed again in December 2018. The fact that that date hasn't yet arrived doesn't make the declaration any less plausible; you might call it perfectly true/false. 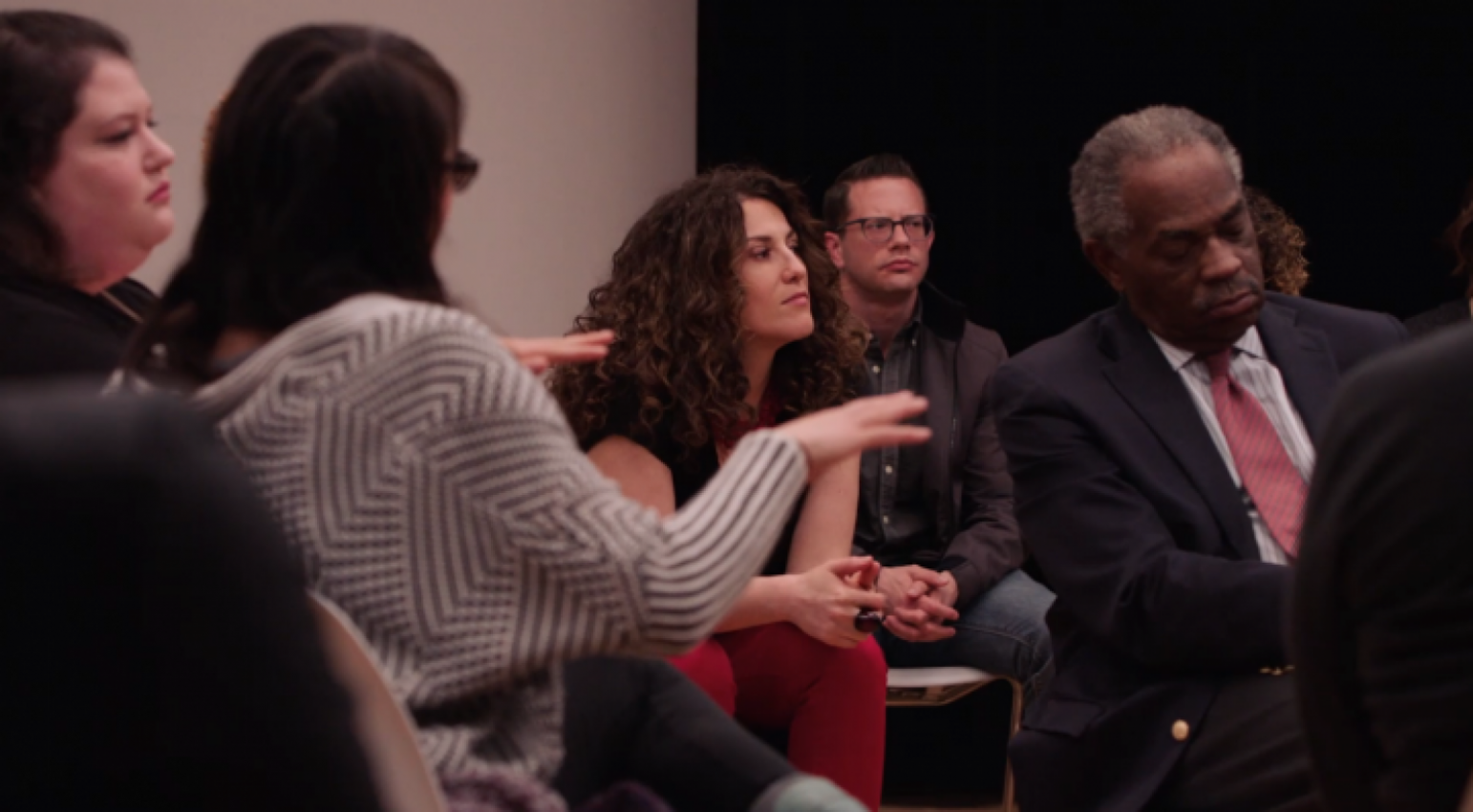 Even for a festival that regularly presents boundary-defying, self-reflexive films that pose challenging ontological questions, Leigh Ledare's The Task was something new. It's also a documentary landmark, very possibly the film of the year—and if it wasn’t for the adventurous True/False programming team, it might never have screened outside its initial context as part of an exhibition at the Art Institute of Chicago. (Following True/False's lead, BAM CinemaFest recently announced that it will screen The Task in New York in June.)

The festival's description had me bracing for something prankish, but The Task enacts a genuinely significant social experiment. Modeled on the Tavistock psychoanalytic method of studying group dynamics, The Task collects a diverse group of two-dozen conference participants in a brightly lit white room, arranges them in a seated spiral surrounded by cameras, and gives them no objective except to "examine your behavior in the here and now."

Some people are voluntary participants, some are counselors and others are filmmakers/observers, but these boundaries are not clearly defined or strictly delineated. (Ledare, a renowned multimedia artist working for the first time as a filmmaker, sometimes gooses the action by taking a seat inside the circle and letting the participants guess at his intentions.) Given the absence of a structuring subject, and thus thrown back upon considerations of subject-position, the participants enact a wide-ranging discussion about process, privilege, manipulation and trauma. Anyone who spends a good deal of time online will recognize that we're in the realm of The Discourse, a social arena where intentions are easily misconstrued, identities are easily erased, and mutual respect seems impossible.

Even describing The Task's central subject makes me uncomfortable, like taking a test that's designed to betray my most deeply held biases. But it seems evident on first viewing that the film addresses the challenge of meaningful communication and democratic representation in a society where we're always either the surveillers or the surveilled. In its emphasis on identity and experience as the basis for having something to say, the project underlines the fact that "Who gets to speak?" is still the primary political question.

Despite its experimental nature, The Task never feels abstract. As a record of what it feels like to be a social being in a 21st century urban environment, it's never less than thrillingly alive. If the "here and now" is the tacit subject of every documentary, few nonfiction films have confronted that vaporous concept so directly, and so unflinchingly.

Akiva Gottlieb is a writer in Los Angeles.

END_OF_DOCUMENT_TOKEN_TO_BE_REPLACED

The Art of the Doc: The Festival Programmers' View