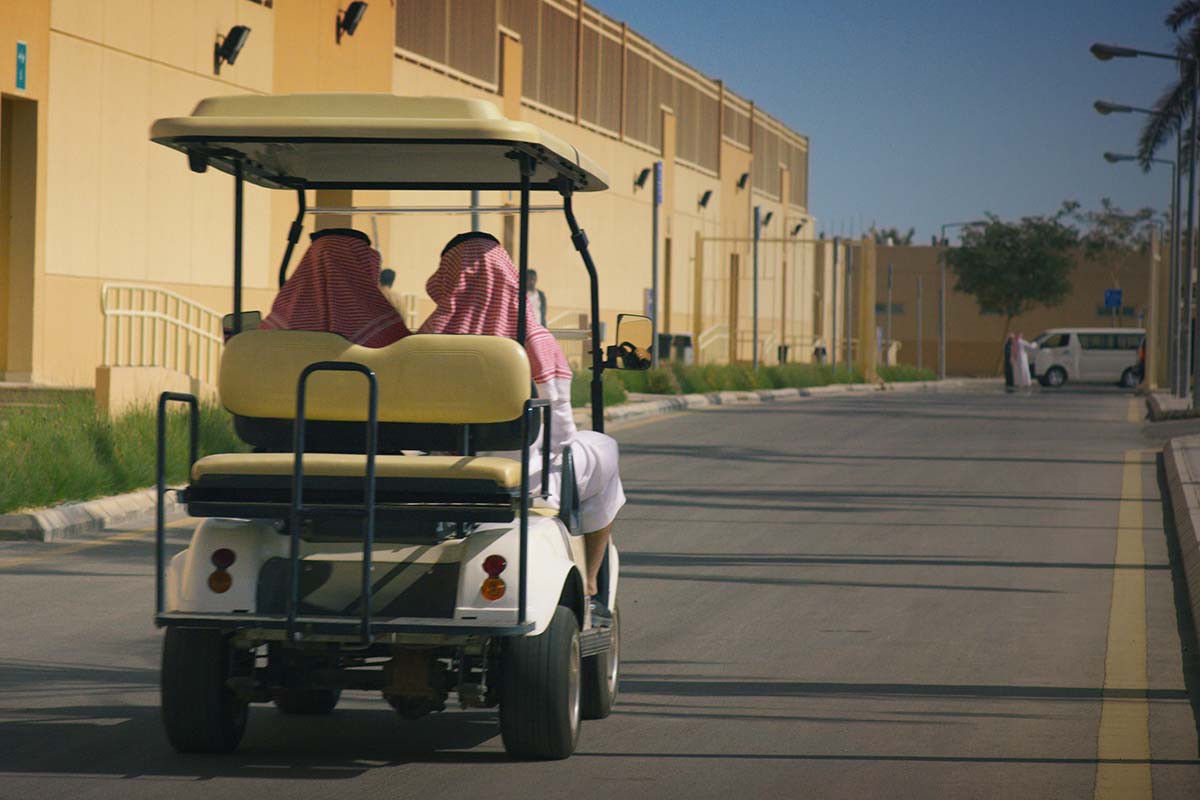 Documentary filmmakers have been raising alarm bells about this year’s Sundance competition documentary Jihad Rehab for over a year, claiming it promotes Islamophobia and re-victimizes its protagonists. The controversy around the film was only just made public after its premiere on January 22; the film received disparaging reviews published in POV Magazine (“A Question of Ethics”) and Filmmaker Magazine, and was criticized in opinion pieces by filmmakers Jude Chehab and Assia Boundaoui; and a loose-knit critical Twitter campaign was joined by award-winning filmmakers such as Sami Khan (St. Louis Superman), Malika Zouhali-Worrall (Call Me Kuchu) and Sonia Kennebeck (National Bird). But members of the documentary community have been warning the filmmakers behind the scenes that the project “inadvertently perpetuates the stereotypes that it seeks to overcome”—as POV’s Pete Mullen wrote—since 2019.

Directed by Meg Smaker, and executive produced by Fork Films’ Abigail Disney and Gini Reticker, among others, Jihad Rehab follows four Yemeni men transferred from the US prison in Guantánamo Bay to a “rehabilitation center” called the Mohammed bin Nayef Counseling and Care Center in Riyadh, Saudi Arabia. Multiple specific critiques have been lobbed at the film, from the way it frames its participants, to the filmmaker’s interrogatory process, to a title that many find offensive and reductive.

In December, when Sundance announced the film’s selection, several filmmakers contacted the organizers and arranged a meeting with Festival Director Tabitha Jackson and Director of Programming Kim Yutani to voice their concerns. “They listened to what we had to say, but they didn’t have any answers,” says Amber Fares, the director of Speed Sisters, who penned the letter to Sundance along with filmmakers Assia Boundaoui, Marjan Safinia, Sami Khan, Jude Chehab, and Samia Khan, accusing the film of having “a rhetoric of ‘nation-based racism’ in which Arabs and Muslims are constructed as potential criminals who constitute a danger for the safety of white civilians.”

Smaker and her producers, then, invited the filmmakers to Los Angeles to see the finished film prior to Sundance, but only on the condition that they sign non-disclosure agreements, which was seen as a way to muzzle those troubled by it. The filmmakers also saw such outreach as belated; after all, much of their rancor stemmed from development meetings with Smaker, two years before, in which they “repeatedly expressed concerns over the nature of [the] film, which [had] been dismissed,” according to Fares.

“To use the word ‘jihad’ in that context was irresponsible, especially a word that has been hijacked from Muslims for so long,”

At a filmmaker retreat at the Hot Springs Documentary Film Festival in October 2019, for example, Jude Chehab spoke with Smaker directly. “When I first heard the film’s title, I was staggered,” says Chehab. “To use the word ‘jihad’ in that context was irresponsible, especially a word that has been hijacked from Muslims for so long,” she continues. Despite its connotations in the West, the literal meaning of the word “jihad” translates to “struggle” or “effort,” often associated with one’s effort to live a life according to the principles of the Muslim faith. “At the end of the retreat, she showed a clip of the film,” recalls Chehab. “I spoke up again in front of the other fellows regarding the title, and she said she liked that it rhymed and if I can think of anything better to let her know.”

Oscar-nominated documentarian Sami Khan took part in a 2019 IFP Doc Lab alongside Smaker, and had seen “all the red flags” at the time, he recalls. “The question I ask people: Could you tell a story in this way about other communities?” he says. “She’s relying on the fear of Muslims to sustain the film.”

Another filmmaker, Zeshawn Ali, director of Two Gods, who also took part in an IFP Doc Lab, was invited to a rough-cut screening of Smaker’s film in December 2019, and gave feedback at the time. While their conversations were constructive, says Ali, he told the filmmaker and producers “that the title and much of the content of the film would be incredibly offensive to Muslim and Arab communities,” and he questioned them about the way the participants were introduced with constructed “rap sheets”— “immediately framing them through a lens of guilt,” he says.

Despite the feedback, the film’s title and framing device remain intact in the version that premiered at Sundance. During the virtual Q&A (available on YouTube), many of the same questions and criticisms arose and were addressed by Smaker, along with one of the film’s executive producers, Yemeni Bay Area resident Mohamed Aabas. As one audience member asked, “The individuals were prisoners of war…but are repeatedly referred to as terrorists and convicts. Why does the filmmaker introduce them as guilty?”

Smaker continues to disagree with these characterizations of the documentary. “The film never states they are convicted of any crimes,” she says. “It simply lists what the US government detained them for, in a single text card. Then the film gives the men the next 90 minutes of the documentary to tell their side of the story and what happened to them in Gitmo.”

“This whole discourse about countering extremism, and that you can turn a ‘bad Muslim’ into a ‘good Muslim’ is disastrous,”

Smaker doesn’t see the introductions of her characters as problematic; rather, she sees their evolution from ominous to more humanized, as reflective of her evolving relationship with them. “Our relationship went through an arc, and that arc is reflected in the arc of the film,” she explains. “I feel like the film’s trajectory follows an organic process over the time I spent with them and how we opened up to each other over those three years.”

But critics of the film point out that this structure is reactionary. “This whole discourse about countering extremism, and that you can turn a ‘bad Muslim’ into a ‘good Muslim’ is disastrous,” says Khan, “Why is the starting point that they’re not human and you have to convince the audience of their humanity? By using that framing, you’re perpetuating cinematic language that their humanity is contested.”

Regarding the film’s title, Smaker and Aabas have continued to defend it, which they say was vetted and approved by Islamic leaders, including Imam Jihad Turk, formerly the Religious Director of the prominent Islamic Center of Southern California. However, another Religious Studies scholar, who prefers to remain anonymous, told the team that the term “jihad” has “become sensationalized and would potentially be deemed offensive by Muslim audiences,” he says. “But they ultimately believed that it would be worth the risk, given that it would draw the attention of the audience they were hoping to speak to—namely, those antagonistic towards Muslims.”

More recently, Smaker appears to be backing down from the title. “I don’t want the title to get in the way of people seeing this film,” she says now, “and if the title is turning some people off to it, we’d be happy to have a discussion about a different name for the film.”

“the bin Nayef center holds many men for months or a year or more who’ve never been charged or convicted of any crime. There’s a name for that. It’s called unlawful detention.”

Questions have also arisen, more generally, about the film’s glossy depiction of the “Care Center” at the film’s core. Letta Tayler, a senior counterterrorism researcher at Human Rights Watch, wrote on Twitter that the “the bin Nayef center holds many men for months or a year or more who’ve never been charged or convicted of any crime. There’s a name for that. It’s called unlawful detention.” While Tayler acknowledges that the bin Nayef facility is obviously a huge step up from Guantánamo, she questioned the circumstances around Smaker’s interviews taking place within an incarceration facility run by a highly repressive regime. “Maybe their answers were truthful. But were they forced to deliver these replies by their Saudi detainers to show they’d ‘repented’ and ensure they’d ‘graduate’?” she wrote.

After having spent two years at the Center, Smaker maintains the situation there is more complex and that the men had the agency and freedom to leave the production at any time, as one of them did.

But fellow documentary filmmakers continue to worry about the safety of the film’s protagonists.

Smaker and her team emphasize the protections and procedures they’ve put in place—for instance, taking the advice of legal consultants and security experts in the US and on the ground in Saudi Arabia and an anonymous co-producer in Saudi Arabia that reviewed the film to avoid any potentially damaging material; and referencing a safety review performed by a security consultant, which found that the plans the filmmakers had said they had taken “either met or exceeded industry standards” for the care and safety of the film’s subjects, according to press notes.

But others aren’t so sure. If the production’s Saudi Arabian crew remained anonymous, presumably to protect them from potential State persecution, worries Khan, “Why aren't the participants in the film granted the same anonymity as the Saudi producers or the multiple drivers and translators who are credited anonymously?”

As Jihad Rehab moves on from its unsteady Sundance launch, and is still being represented for sales domestically by UTA, many of these issues will continue to hang over the film. Smaker and her producers are feeling the pressure, and at least one company, prominent doc studio XTR, appears to have taken their name off the project despite having put money in it. When Documentary reached out to Sundance for comment about their support for the film, a Sundance Institute spokesperson responded, “We acknowledge that the documentary film Jihad Rehab has raised concerns for some of our audience, and we are listening with respect and humility. As always, we encourage constructive discourse around the films we show—Jihad Rehab is no exception.”

Several of the filmmakers who have spoken out against the film remain both defiant and dispirited. “There’s a real sadness among this group of filmmakers,” says Khan, who along with others, are using the film to raise larger questions about a documentary business that continues to fund and showcase stories that portray Islamic culture in sensationalistic ways—and Muslim men, in particular—as misogynist and violent. “This is one of the huge blind spots in our industry, and in the US, in the way Muslims have been framed since 9/11,” says Amber Fares. “And this film is an example of that systemic problem.”

Editors' Note: An earlier version of the article identified Amber Fares as the sole author of the letter to Sundance. This has been corrected to include the names of the other authors.

Also, since publication, we've been informed that Autlook Film Sales is no longer involved with Jihad Rehab; we have removed their name from the article.

Finally, the article previously referenced the press notes for Jihad Rehab, which cited a safety review performed by a consultant. That consultant was told they would not be mentioned in the press notes, and we have honored their request to remove their name.