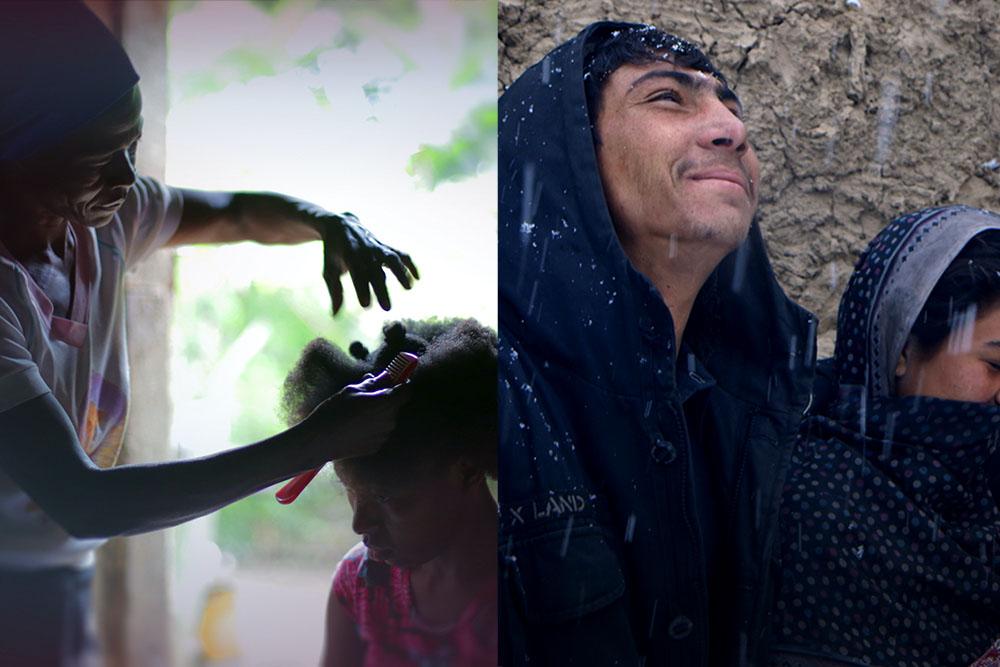 Because of their Haitian ancestry, Elena and her family have lost their Dominican citizenship. She must negotiate an opaque bureaucracy in a racist, hostile society, or else remain stateless in a country intent on deporting its darker-skinned citizens.

The story of Shaista, a young man who—newly married to Benazir and living in a camp for displaced persons in Kabul—struggles to balance his dreams of being the first from his tribe to join the Afghan National Army with the responsibilities of starting a family. Even as Shaista’s love for Benazir is palpable, the choices he must make to build a life with her have profound consequences.

Filmmaker, artist and author, Michèle Stephenson, pulls from her Haitian and Panamanian roots to think radically about storytelling and disrupt the imaginary in non-fiction spaces. She tells compelling, deeply personal stories that are created by, for and about communities of color that reimagine and provoke. She is a three-time Emmy® Award nominee, winner of Tribeca and Sundance Festival Jury Prizes and an NAACP Image Award for Outstanding Literary Work. Stephenson is also a Guggenheim Fellow and a Creative Capital artist.

Elena Lorac is founding member and co-coordinator of the Reconoci.do movement, which, since 2011, advocates for the rights of Dominicans of Haitian descent in the Dominican Republic. The Reconoci.do movement has presence in several bateyes (rural communities whose population works in works nearby sugar cane crops) and accompaigns Dominicans of Haitian descent in the claim of their rights in front of the institutions. Members of Reconoci.do frequently face accusations of promoting a Haitian invasion, threats by conservative groups and defamation efforts.

Gulistan Mirzaei is director from Afghanistan. He spent part of his life as a refugee in Iran before returning to Kabul in 2001. He assisted the late Faheem Dashty, Editor in Chief of Kabul Weekly, the first independent newspaper to be published in Kabul after the departure of the Taliban. Gulistan was mentored by award-winning director Siddiq Barmak (OSAMA). His first feature film, Laila at the Bridge picked up awards at numerous festivals including CPH:DOX, Bergen, and Santa Barbara. His short film from Afghanistan, Three Songs for Benazir, premiered at Full Frame where it won the Jury Award for Best Short. The film also was shortlisted for the Cinema Eye Honors and picked up numerous other jury awards, including at Yamagata International Documentary Film Festival. A recent immigrant to the United States, Gulistan still travels back to Afghanistan with his family.

Elizabeth Mirzaei is a director and cinematographer of nonfiction films. Her first film Laila at the Bridge, co-directed with Gulistan Mirzaei, screened at dozens of festivals, including Locarno and Edinburgh, and had a theatrical run in the UK at Bertha DocHouse. Elizabeth lived in Afghanistan for over eight years. She is a Film Independent Fellow, a Moving Picture Institute Cinematography Fellow, and a Sundance Co//ab Advisor. Her cinematography has been featured in films thats screened at Venice and Toronto Film Festivals, among others. Her short film Three Songs for Benazir, co-directed with Gulistan, won jury awards at several Oscar®-qualifying festivals including Full Frame, Yamagata, and Odense, and was shortlisted for the Cinema Eye Honors. Elizabeth lives in California with Gulistan and their two daughters.

Omar Mullick was Director and Cinematographer on the 2013 feature film These Birds Walk, which went on to be named as one of the Best films of the Year by the New Yorker Magazine, Indiewire, and Sight + Sound Magazine. In 2016 it was listed by Richard Brody at the New Yorker as one of the best foreign films of the 21st Century. It was distributed theatrically by Oscilloscope Laboratories. Since then Omar has been a Director and Cinematographer on a number of feature films and series, most recently as a Director on THE VOW for HBO. In 2021 Omar was a screenwriter and Cinematographer on his first fiction film TU ME RESEMBLE which premiered at the Venice Film Festival. When he is patient, Omar can cup hummingbirds in has bare hands that no one else can see. Film is his way of proving to you they are really there.