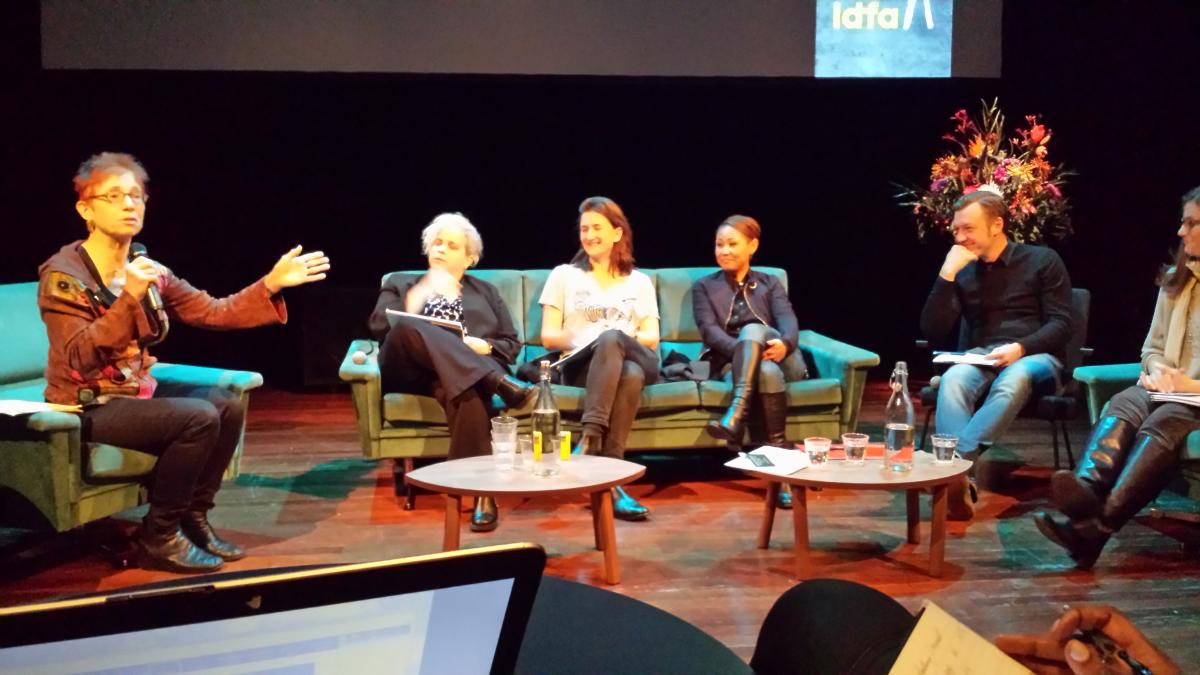 For documentary filmmakers, strategists, funders, broadcasters, buyers—and of course, fans— November means the International Documentary Festival Amsterdam (IDFA), the premier international festival celebrating the best of the form from around the world. Along with more than 350 films and virtual reality projects on display, conversations about documentary’s societal impact were front and center.

On the opening day of the festival and forum, Center for Media & Social Impact (CMSI) founder and senior research fellow Pat Aufderheide moderated a panel titled, "Evaluating Impact: Challenges and Opportunities in Working with Impact Metrics in Documentary," leading a discussion with an ecosystem of media-impact strategists, broadcasters and fundraisers, including Jessica Clark (Dot Connector Studios), Patricia Finneran (Story Matters), Beadie Finzi (BRITDOC), Klara Grunning-Harris (Swedish Film Institute) and Leevi Kokko (YLE). The panel also featured special guest respondents—Marie Nelson from PBS and Ellen Schneider from Active Voice, and I represented CMSI—who weighed in with the panel and audience about key topics. The major thru-line was a rich discussion about how evaluating a film’s reach and social impact can be used to the filmmaker’s advantage—and used to lift up the documentary art form and encourage more investment in the work. Aufderheide began by showcasing slides to "dispel some common myths," including:

As Beadie Finzi sees it, this is an exciting moment in the innovation of documentary storytelling and a break from old ways of doing business. "Our beautiful and precious field is still in the grips of this problem that box office and TV ratings are worshipped as gods," she said. "This is really unfortunate and it absolutely impacts what projects are even made. The idea that we can strive to understand the other ways our work can have value in the world. I am not only interested about evaluation, but I’m excited about it."

The other panelists emphasized their perspectives on impact assessment. They all encourage filmmakers to add the work to their budgets, and they reinforced the great benefit of having stories to share about how the stories have value beyond audience reach. According to PBS’ Marie Wilson, "The broadcaster in me wants us to use the tools available to bring more of this content to our air. We need more filmmakers pounding the pavement about how this work has meaning and reach, because these are not ratings machines. If we are successful in expanding our ability to do this work in a rich way, we have a great argument we can make about why these films should continue to be made."

The next day, BRITDOC convened the first-ever Global Impact Producers Assembly, funded by the Ford Foundation’s JustFilms and the Bertha Foundation. The all-day gathering was an invitation-only convening featuring about 85 documentary filmmakers and social-impact strategists and researchers from 18 countries around the world. The gathering served as continued discussion about an evolving profession created in the efforts to research and create social change through documentary storytelling—the "impact producer." Since an initial BRITDOC gathering in 2011, the rise and formalization of this new professional—a combination strategic communication specialist, grassroots mobilizer, public affairs strategist and distribution expert, along with some research chops—has picked up steam both in the US and around the world. With the 90 or so professionals in attendance, the mix of featured projects and people—including teams from the Academy-Award-nominated Virunga and the 2012 hit Bully—showcased the richness and evolution of the work over a fast-moving four years. Major themes focused on best practices and innovation, including an increasing need to complete research and learn from global colleagues.

END_OF_DOCUMENT_TOKEN_TO_BE_REPLACED

Hot-Topic Documentaries at Tribeca Go Beyond the Headlines