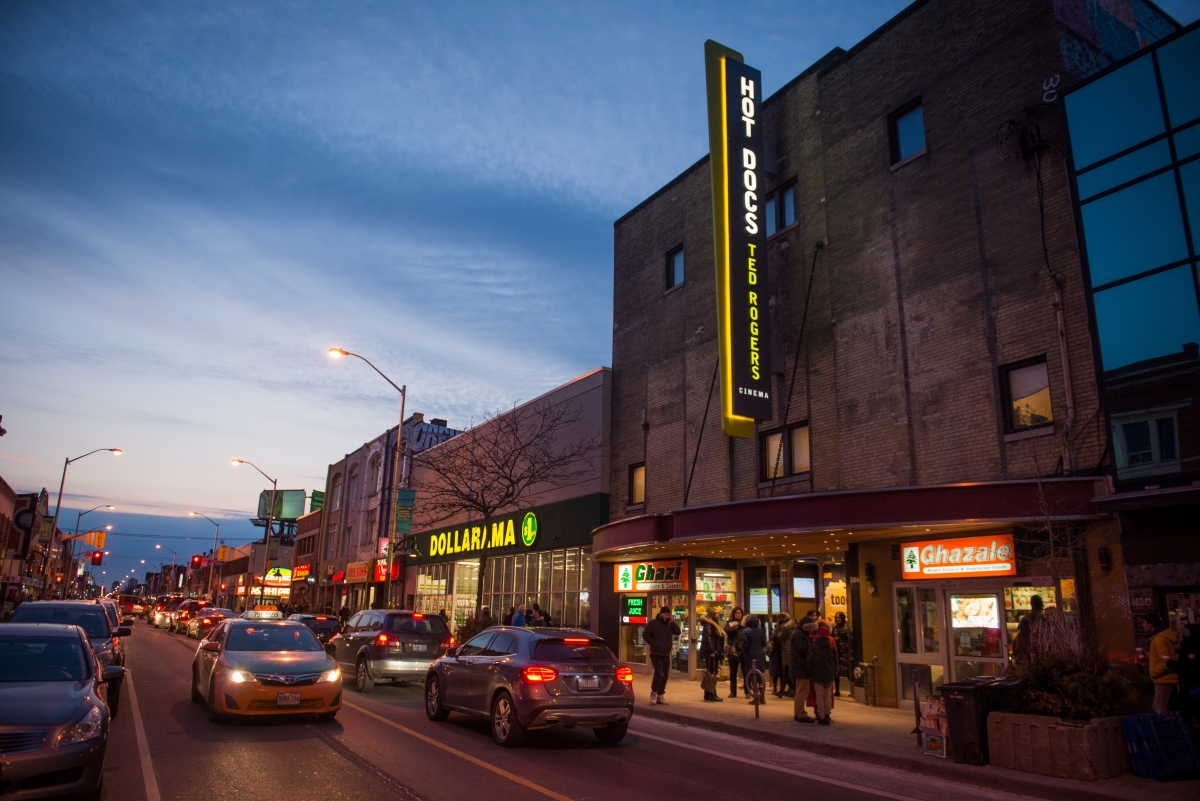 Over the coming days, hundreds of filmmakers and industry professionals from across the globe will land in Toronto, Canada, to participate in the Hot Docs Canadian International Film Festival—North America's largest documentary festival, conference and market. Documentary film, widely celebrated as Canada's national art form, has found a welcoming embrace in Toronto, and the upcoming edition, which runs from April 26 to May 6, marks an impressive quarter-century of preeminence in the documentary community.

Founded in 1993 by the Documentary Organization of Canada (formerly the Canadian Independent Film Caucus), Hot Docs was initially an artist-run undertaking, by filmmakers for filmmakers, designed to create opportunities to showcase their work. Over the past 25 years, the festival's audience has grown from 7,000 to a remarkable 215,000 in 2017. According to Brett Hendrie, Hot Docs' executive director, the growth of the public side of the festival has been "tremendous," and due in large part to Toronto's voracious appetite for documentary. Living in one of the most diverse cultural hubs in North America, Torontonians, Hendrie explains, are "keenly interested in international stories and sophisticated in terms of their film tastes—they aren't scared of navigating a film festival, let alone a documentary one."

If supportive audiences have been key to the festival's longevity, Hot Docs has certainly nurtured the city's innate curiosity towards global storytelling through several crafted community engagement initiatives. The festival's strategy has largely centered on building year-round audiences. Hendrie cites Doc Soup as an important example. The subscription program offers continuous opportunities to watch nonfiction film, and functions as a de facto "documentary-of-the-month club." Launched in 2001 with less than 50 people, the program now attracts 1,000 monthly subscribers.

Over the past decade, the festival has also taken important steps to ensure accessibility to its films through free daytime screenings for seniors and students, screenings for recent newcomers to Canada, and neighborhood screenings outside of Toronto's downtown core. In 2006, Hot Docs launched its Docs for Schools program, which brings free documentary screenings to 300 high schools across the province of Ontario and fosters deep collaboration with educators who weave documentary into their curricula and daily lesson plans. Last year alone, more than 100,000 students participated in the program. Docs for Schools, Hendrie explains, is both "hugely popular and such an important part of the festival's mandate of exposing a new generation to great documentaries."

Toronto is now also home to the Hot Docs Ted Rogers Cinema, a 650-seat theater that caters exclusively to documentary aficionados. The idea came from a member of the festival's board of directors, who insisted that Toronto needed additional theatrical opportunities for documentary films, and was willing to enter into a decade-long partnership with the festival to launch the venture. Hendrie admits that, at the time of the theater's opening, "a lot of people said we were crazy and that it couldn't work." He recounts that "art house and independent cinemas were falling off the map and Toronto's independent cinemas had dwindled from 70 to about eight." Despite the risky context and the need for a major renovation of the art deco space located in Toronto's Annex neighborhood, the Hot Docs Ted Rogers Cinema now holds screenings 364 days a year, and is supported by more than 8,000 committed members who provide a stable source of revenue for the venture.

The festival's ability to serve audiences is, of course, dependent on filmmakers' ability to produce compelling narratives. Recognizing the myriad challenges that filmmakers face in developing and completing documentaries, Hot Docs has sought to bolster financial support for filmmaking as a critical component of its documentary festival ecosystem.The festival launched its first production fund program in 2008—a $4 million initiative sponsored by a Canadian broadcaster, which provided production grants and loans. Hendrie describes this milestone as an important "game-changer" for the organization, as it enabled the festival to put "cash directly in the hands of projects." Since that time, Hot Docs has launched multiple funds for filmmaking teams, a $10 million portfolio that over the past 10 years has disbursed funds to both Canadian and international filmmakers. Collectively through these initiatives, Hot Docs has supported approximately 200 documentary films. "The program has become important in terms of how we think about the organization today; it is there to support filmmakers through the entire lifecycle of a film."

The centerpiece of industry programming at Hot Docs remains its Forum—a high-stakes pitching event that brings together a strong international cohort who vie for funding for their projects. Elizabeth Radshaw, industry programs director, describes the strength of the event as "its very global focus." Selected projects "reflect an important cross-section of the international documentary community, where first-time feature-length filmmakers and absolute masters, each with projects at varying stages of development," can present their pitches on a level playing field. The primary characteristic that unites the participants, explains Radshaw, is exceptional storytelling. With only 20 projects selected for the Forum and multiple chances to secure substantial funding packages, the odds of success are actually quite good.

Moreover, Hot Docs puts substantial effort into enhancing the competitiveness of selected participants. In the months leading up to the Forum, the festival staff works closely with teams to help them hone their pitch—everything from clarifying concepts to articulating clear goals—with the ultimate aim of helping filmmakers get the most out of the experience. The Forum illustrates "our coming together as a documentary community," Radshaw muses. Also important, she explains, are all of the other observers who are in the room during the pitches, from angel investors to programmers at other festivals, sales agents and potential co-production partners. "We've heard the most amazing stories under the sun, and it is not always about what transpires at the table, and at the microphones, but the connections and relationships that are built in the Forum itself with its many observers," she explains. "It's an excellent way to launch your film into the international documentary community." Built around this main industry event at Hot Docs are conference sessions, talks and keynote sessions. A diverse industry program, according to Radshaw, is important for fostering relevant conversations about critical issues in the documentary community, networking and opportunities for cross-collaboration across international delegations. Eleven Forum alumni were selected for this year's festival—a testament to the strength of the festival's industry programming, the rigorous training and support for its participants, and the commitment of funders who field pitches, even as their budgets have become squeezed in recent years.

While formal participation in industry programs can indeed enhance opportunities for a Hot Docs premiere, festival programmers are attentive to finding and bringing the best and most innovative films to the festival, irrespective of their industry connections or origins. "In the spirit of documentary," says Myrocia Watamaniuk, a senior international programmer at Hot Docs, "we have one of the most democratic festival submissions processes that I know of." Each submission, she explains, is carefully reviewed by at least two programmers. "I know filmmakers can be wary of festivals where you have to know someone, or have some kind of name recognition to get their films watched, but that isn't the case at Hot Docs."

Even with the festival's genuine commitment to advancing the careers of filmmakers from around the world, securing a spot in the 200-strong program is no small feat. In 2018, the festival received 3,000 feature-length submissions from 95 countries. Stories must not only be accessible, fresh and compelling, they must also offer "superior execution in terms of the visual world of the story." It is a tall order, but Watamaniuk notes that the festival maintains a healthy number of first-time filmmakers in its programming: "I've had the pleasure of discovering filmmakers who have gone on to do incredible work, become very well regarded, and have their future films made because of their track record at Hot Docs."

Seeing documentaries meet with success at the festival is incredibly gratifying for filmmakers and programmers alike, explains Watamaniuk. Filmmakers, often working alone in dark room, sometimes for years on end, finally "see the sun" when hundreds of people connect with their film in a packed theater. "A filmmaker sees how many people have come out—left their homes and paid money—to come to the theater to see their story," she notes. "And then, after the screening, when they hear the applause or see how many people stay to ask questions, they are moved beyond words...to tears—theirs and mine. Those moments take everyone's breath away."

END_OF_DOCUMENT_TOKEN_TO_BE_REPLACED

Can It Get Any Hotter? Hot Docs Celebrates Another Banner Year