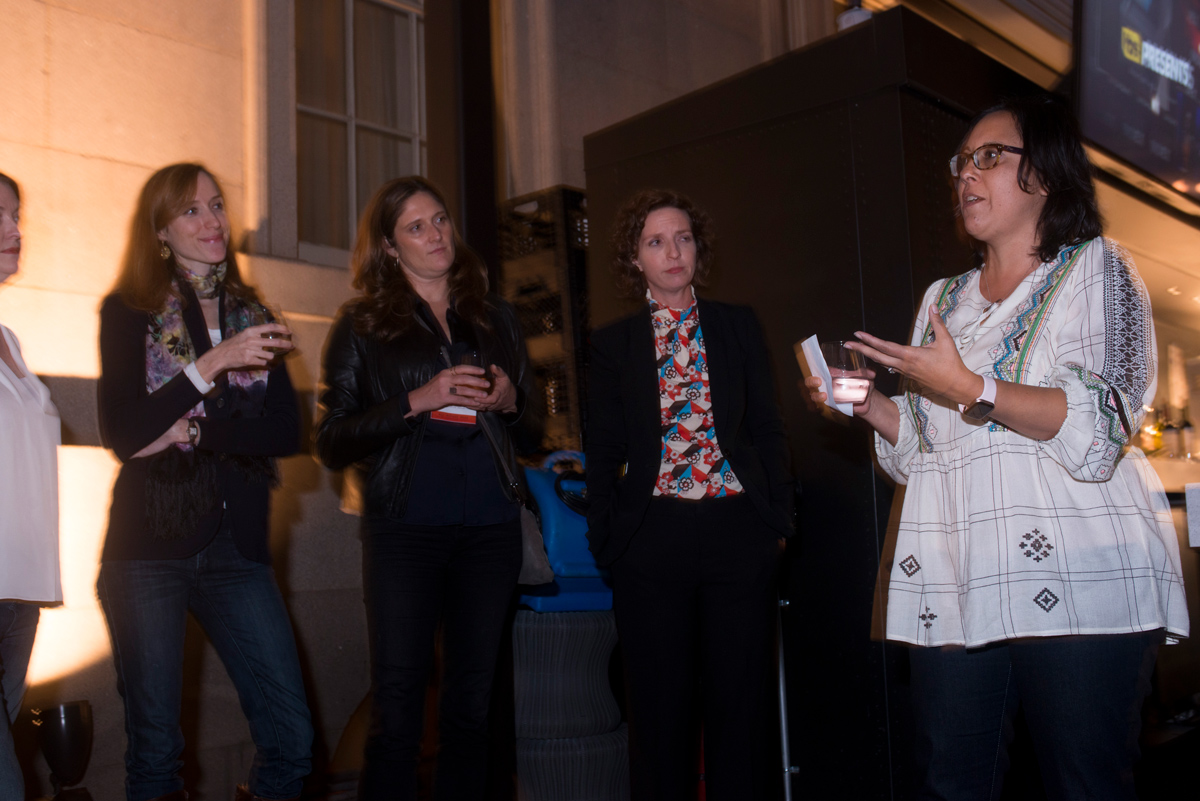 When IDA launched the Enterprise Documentary Fund at Sundance 2017, the festival coincided with the Women's March and Trump's inauguration. The blizzard conditions underscored an overall feeling of sobriety, as attendees reeled from the unexpected electoral outcome. The whiteouts and slippery roads were the appropriate mise en scene, reflecting the uncertainty that so many felt. But there was also a palpable energy, with lots of planning and organizing, though, no one seemed sure to what end. Looking back, who could have foreseen the Muslim Ban, Cambridge Analytica, the crisis at our border, escalations in the Middle East, or the administration's aggressive and calculated assault on the press? As the administration’s adversarial approach to the media rapidly unfolded, we realized that the Enterprise Fund was not just about journalistic rigor and building bridges between the journalism and documentary fields, but that it was also an opportunity to double down on press freedoms overall.

The fund was largely inspired by the work of Pat Aufderheide and her team at the Center for Media & Social Impact on their 2015 report "Dangerous Documentaries: Reducing Risk When Telling Truth to Power." The study's core concerns were already on display at IDA's first Getting Real conference in 2014, and its publication underscored the real challenges that filmmakers were facing when taking on high-risk stories. In addition to journalistic support and journalistic vetting, we wanted to provide significant funds to help filmmakers gain tangible momentum and attract other funding.

In the three years since we launched the Enterprise Documentary Fund, we have accomplished the following:

In the midst of our fourth production open call, it seemed like a good time to reflect on our work and share some of the things I've learned.

There are far more worthy projects than there are funds. As IDA participated in conversations around long-term career sustainability, we made a deliberate decision to primarily support mid- to late-career directors and producers at the production level. We stand by that decision, but funding those filmmakers has emphasized some stark realities and points of tension.

In 2019, 700 proposals were submitted for development and production funds. The odds of receiving a development grant this year were .025 percent, roughly Stanford’s admissions rate. I’ll be honest: That math—and all that it implies—bothers me. Yet, an open call means we do identify and fund projects and filmmakers that are totally unknown to us, expanding the pool of filmmakers who benefit from both the money and visibility of receiving a grant.

In addition, in each development round, we support projects at the concept phase with no footage in hand. We believe this is an important step toward equity: enabling filmmakers to go out and get footage without using their own funds. But is it truly equitable? We don’t request personal financial information from filmmakers. So, how do we know if our intended goals are being achieved in any real way?

I strongly believe that putting ideas to paper is the first (or should be close to the first) step of making a film, and there’s an argument in favor of meeting a grant deadline and forcing oneself to answer the hard questions. Anecdotally, we have heard that the Core Application has lightened the burden on filmmakers (though, we know there's work to be done there too). And yet, who's left out of the writing process? Who has the privilege of becoming a strong, clear and compelling writer? And aren’t the inequities amplified when people opt out of the writing process altogether? I'd love to grapple with ideas about how to address the proposal-writing conundrum, but with each idea I have, it narrows the pool even more. This was the genesis of our grant-writing workshop.

That said, it's worth repeating that there are far more worthy projects than there are funds. I see filmmakers lamenting their rejections on Facebook and message boards, feeling angry and dejected, and I know that feeling myself. But the reality is that a rejection may have very little to do with the quality of a project or with how it fared in the review process. I recently experienced this with a film I'm executive-producing, the upshot was: "Your project did amazingly well, everyone loved it, but sorry, you are not receiving funding." I was lucky to get that feedback. With hundreds of proposals, it's impossible to convey helpful feedback across the board.

I’m not fooling myself: Enterprise grants have a significant impact on individual filmmakers, but it will take a lot more than our current philanthropic landscape to dramatically impact the sustainability of the field. I know that in aggregate the money is out there, but independent filmmakers face a financial reality that more and more reflects the dramatic inequities of our broader economic system.

Robust reviews with diverse voices and expertise are essential. Let me tell you, there are easier ways to make decisions. But for us, it is critical to get a multitude of perspectives on our projects. We engage filmmakers, journalists, scholars, programmers and distributors in our review process, and we know that this input helps us identify strong slates. This process also gives our partners (let's just call them heroes) the confidence to work with our filmmakers without needing to expend their own vetting resources. It’s a win-win.

Equally important, diverse reviewers and selection committees naturally lead to diverse projects. Throughout my career, I have been frequently and directly told that "diversity is hard" or that achieving diversity would "lower" quality. Given my own LatinX background, it took me years to build the courage to call out those sentiments as both bullshit and racist, but I'm happy to report that I've at least mastered that.

But, this work remains fraught in unexpected ways. I’m starting to lament that diversity is easier to achieve than equity. In part, because we don’t have a culture of collecting data that would ensure more equity. Should we be developing a FAFSA (Free Application for Student Aid) equivalent? Also, there are life experiences and identities that are difficult to capture in a check-box. Thornier still, sometimes one form of diversity excludes another form of diversity when making decisions. I firmly believe that in my role as a funder, it’s my job to hold all of this and to be as responsive as possible, but I’m the first to admit that I lack satisfying remedies or even band-aids.

Accuracy, fairness and transparency are still our priorities. That pesky journalism question in the Enterprise Core Application is our opportunity to gain insight into your process. How are you going about understanding and vetting your subject matter? How are you working with your sources, and what is their understanding of your film? How do you know what you think you know, or how will you verify the major premises and takeaways of your film? What research have you done or do you need to do? And do you have a clear understanding of all of the above? Not to mention, What's new or revelatory about your work?

Sometimes things are not as they seem or not as we want them to be: journalism is a process of discovery, not a fait accompli. If you are convinced of something, you need to share your evidence, thus convincing the reviewers too. This doesn't mean that our grantees have all the answers when they receive funding. It does mean that they are aware of what they are embarking upon and transparent about their challenges or shortcomings.

Craft is a priority too. Filmmaking at its best relies on the medium as the ultimate conveyor of its message. Otherwise, why make a damn film?! Do something easier. When we review proposals, the artistic approach is elemental: whether narrative, explanatory or conceptual; whether offering entree into an individual’s life or a community’s reality; or whether using imagery and juxtapositions as provocations. This is your opportunity to convey your vision; run with it!

Why are you the right person or team to make this film? Throughout my career, this has been a standard question, and I flinch thinking about some of my own unconvincing and trite answers. The last few years have seen a sea change in this discussion. Thanks to the work of so many filmmakers, we are having robust debates about "extractive storytelling," and we too are looking to filmmakers to convince us that they should be making their proposed film.

What's missing from this dialectic, however, is the voice of the participants. I have heard over and over that the film team holds the power in the filmmaker-subject relationship. And, no doubt, that’s often true. But that blanket belief strips participants of their agency, which is problematic in its own way. Seeing this as a gray zone, we expect filmmakers requesting philanthropic funds to be transparent about their approach, their relationships and their positioning of the film so that we can better assess the ethos of a production.

So, what's the secret sauce? I wish there was one, but each open call looks different from the last. Each year, a zeitgeist emerges and you don’t know what it is until you have all those proposals in front of you. In 2017, stories were reacting to our new political reality, capturing quickly unfolding events on the ground. In 2019, filmmakers were taking a step back, exploring issues less grounded in current events, and instead excavating how we got to this time and place.

Once all the vetting is said and done, what Enterprise projects share in common is their originality. The films might cover heavily tread subject areas, but the stories add a twist, bringing to light information or perspectives that are additive and not redundant.

Sometimes when I feel overwhelmed or hamstrung by the intractable issues our field faces, or blindsided by my own bias or lack of understanding, I recall a moment in Toni Morrison: The Pieces I Am when she speaks of her work as an editor. While she was busy editing some of the most important African-American voices of our time, many of her peers were engaged in more radical action. Reflecting on her role, she essentially says, "I was creating a record." I keep coming back to that idea. As I think of Crime + Punishment, The Feeling of Being Watched, Always In Season, One Child Nation and the upcoming series And She Could Be Next, I feel honored to work in a field that is not shy about its shortcomings, and very often, puts its money where its mouth is. I don't expect documentary funds or films to solve the world's problems, but I do hope they can illuminate them, expand our understanding and thinking—and, ultimately, create a record.

Carrie Lozano is the director of the IDA Enterprise Documentary Fund.