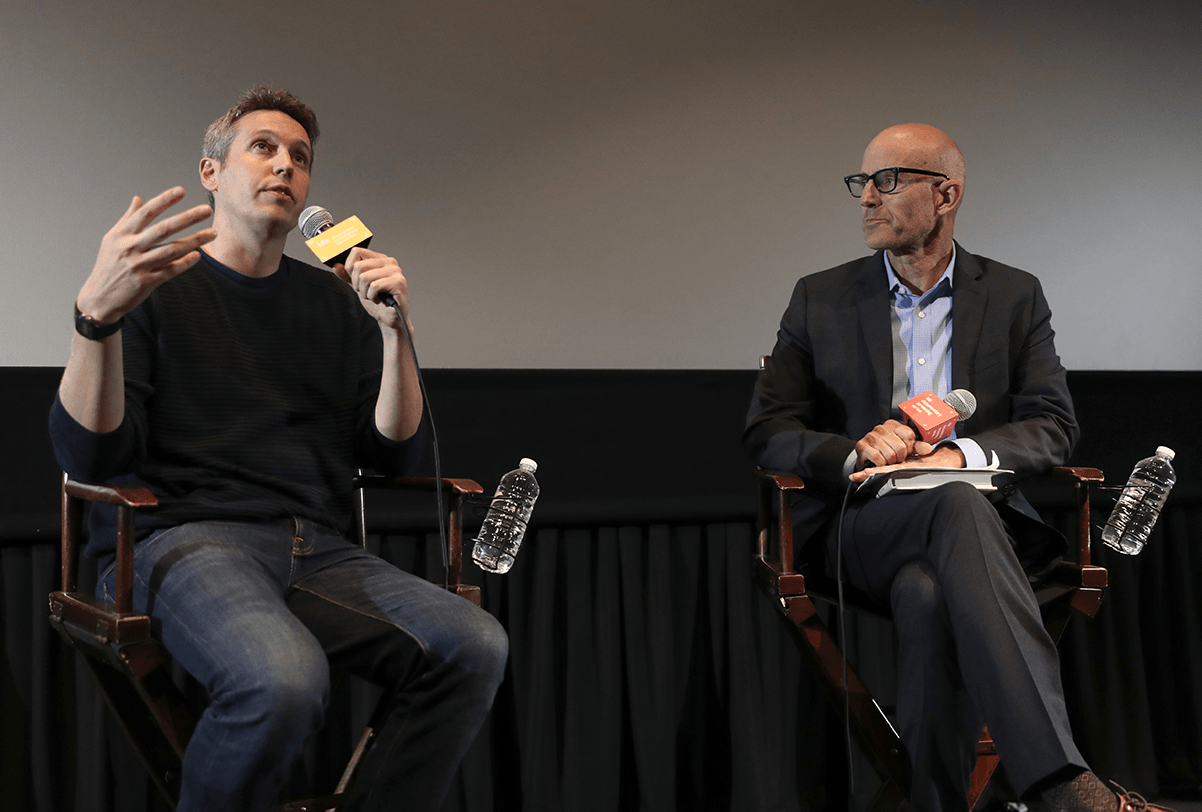 My exposure to documentary film was quite limited growing up. Like many, I got my fair share of Ken Burns clips and maybe an episode of PBS FRONTLINE in high school, but for the most part, I knew very little about documentary film. Enter, the IDA Documentary Screening Series—a godsend to a documentary novice like myself trying to grasp the nuances of nonfiction storytelling.

Gliding up the escalator of The Landmark to my first screening, Three Identical Strangers, I was greeted by a line of ecstatic filmgoers of all ages. I expected to see many people my own age; free entertainment is a huge draw for anyone in their 20s just making their way into the world, but as I waited in line I discovered many of the attendees had already seen the film. I spent the next 20 minutes avoiding spoilers with my headphones placed firmly in my ears until I could claim my seat toward the front of the theater. The lights dimmed, and off we all went into a captivating story of family and brotherhood too fantastic to be anything but true. But despite the twists and turns Three Identical Strangers took (I won’t spoil that here), the filmmaker panel after the screening will be forever etched into my memory.

As the credits rolled and Tim Wardle, director of Three Identical Strangers, stepped to the front of the theater, I could tell by his quietly excited demeanor the coming conversation would be worthwhile. The excitement for his work emanated from him as he spoke with moderator John Horn of KPCC. Initially, Wardle focused on the story of the brothers and the immense efforts he made to build trust with his subjects. But then he quickly segued into a conversation on the question of nature versus nurture explored in the film. What struck me, though, was that Wardle didn’t discuss nature versus nurture in the theoretical sense at all. Rather, he opened up to the audience and shared how the questions raised in his film affected his personal life. “In the process of making this film, I was engaged, married, and had my first child,” said Wardle. In conversation, Wardle provided a glimpse into the film and, more importantly, himself. The intimacy and struggle to bring a film to audiences often gets overlooked on the publicity circuit. Learning more about Wardle’s own growth through the making of the film left me with a greater appreciation for Three Identical Strangers than a regular screening surely would have.

In another screening, Christopher Quinn, the filmmaker behind Eating Animals, shared a similar insight to the crowd at the DGA Theater. “I was asking, ‘What is America?’. And as I went out and met the farmers and the whistleblowers, it restored my faith in the idea that we can create a new system and figure out a way forward.” In many ways, Quinn’s journey described the core of documentary filmmaking; asking a question and discovering an unexpected truth beneath the answer you were expecting. The pesky, essential truths that elude filmmakers in the pre-production process creep out the moment you allow yourself to shed part of your initial plan. Bing Liu, recently awarded Best Documentary Feature at the IDA Documentary Awards for Minding The Gap, took time in his acceptance speech to thank those that helped him see that his film was about more than skating culture in the Midwest.

Further on in the screening series, the film LIYANA, directed by Aaron and Amanda Kopp, again touched on the power of relatability in storytelling—focusing on the narrative of crafting a narrative, we see South African storyteller Gcina Mhlophe work with children to craft a fairy tale that speaks to the truth in their own lives. As pointed out by Executive Producer Thandie Newton, “She [Mhlophe] understands how important it is for these children to touch the darker aspects of their lives but by creating a story from these moments they control the darkness and they can eject it to another place.”

Like the filmmakers, we, as viewers, seek the essential truths driving every piece of media we consume. The IDA Documentary Screening Series really hammered that point home for me. Hearing from the creative voices behind each film offered up a secondary experience to find understanding within the story. Now, after a few months of IDA screenings, I’ve inched my way from doc-newcomer to doc-novice and have been continually amazed by the styles in which filmmakers conceptualize truth to relate to an audience. From the verité vantage point of films like Minding the Gap to the imaginative animation of LIYANA, many of the films I saw this year in the screening series couldn’t be more different from one another, save for one realization: Truth relies on relatability in order to flourish. And, like the filmmakers who seek the strongest way to tell their story, we must open ourselves up and find ways to relate to the truths of our friends, relatives and peers. While that may seem a daunting task, the IDA Documentary Screening Series feels like a great place to start seeking out new perspectives.

Mitch Kampf is the digital communications associate for the International Documentary Association.

END_OF_DOCUMENT_TOKEN_TO_BE_REPLACED

After Finding the Lost Boys of Sudan, Things are Looking 'Up in America' for Christopher Quinn