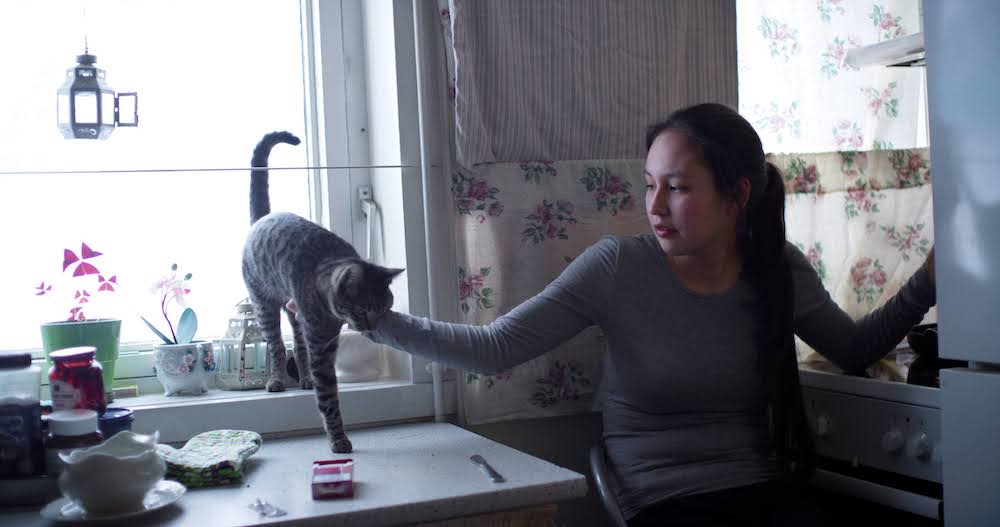 Eefje Blankevoort and Els van Driel’s feature documentary Shadow Game shares the reality facing immigrants, who flee from war-torn homes. The documentary follows teenagers leaving European countries, as they “travel through a shadow world of minefields, bears, fast-flowing rivers, smugglers and border guards, desperately trying to win what they call ‘The Game.’” Watch the film on True Story and see the lengths that these teenagers will go to in pursuit of a better life.

A film exploring citizens’ attempts to redefine history as it gets defined by nationalistic projects, is Chan Tze Woon’s Hot Docs Award-winning Blue Island. A combination of documentary footage and fictional reconstruction, Blue Island attempts “to describe the Hong Kong of today and tomorrow.” The documentary shares the political complexities of Hong Kong and the resilience of students mirroring the struggles of prior generations. Stream at home on Metrograph’s virtual cinema.

Cai Thomas’ Queenie follows an elderly Black lesbian’s transition from her decades-long stay at the Brooklyn Marcy Projects, to Stonewall Residencies, the first LGBT affordable housing in New York City. The short doc is part of the If/Then Shorts lineup on The Criterion Channel, which showcases several other “documentary storytellers whose voices have been marginalized within the film industry.” Queenie, along with five other short docs, will be streaming this August.

Chances are you’ve seen the viral tweet of filmmaker Béla Tarr posing with a bootleg DVD of his films in a DVD shop in Peru. Pasaje 18, the shop in question, finds itself at the center of a fascinating documentary, Peru’s DVD Pirates Have Exquisite Taste, produced by Vice’s Motherboard, which illustrates the power struggle to access films in Lima, Peru. The protagonist of the film, a self-proclaimed “promoter of culture,” argues that knowledge is to be shared and spread. People can only buy within their means, and for some, that results in piracy. No matter what side of the piracy debate you’re on, check out the brief documentary on YouTube.

Sidse Torstholm Larsen and Sturla Pilskog’s Winter’s Yearning documents the residents of a small town on the Greenlandic West Coast, as they wait for an American smelting plant that could transform its economy and political sovereignty. Though the people of Maniitsoq, Greenland crave independence, it is a wish that contains several caveats and dangers. Watch the documentary on POV.

Valentin Thurn’s 10 Billion: What’s On Your Plate examines the impact of human consumption on the world. Thurn delves into the consequences of mass consumption, which will only grow with the population. Though the film highlights daunting issues—like the fragility of our food sources—it also shows sustainable ways to ensure that our future generations are fed. View the film on OVID.TV.

END_OF_DOCUMENT_TOKEN_TO_BE_REPLACED

'The Distant Barking of Dogs': An International Co-Production Case Study

Change: It's What's for Dinner: 'Food, Inc.' Takes on Agribusiness