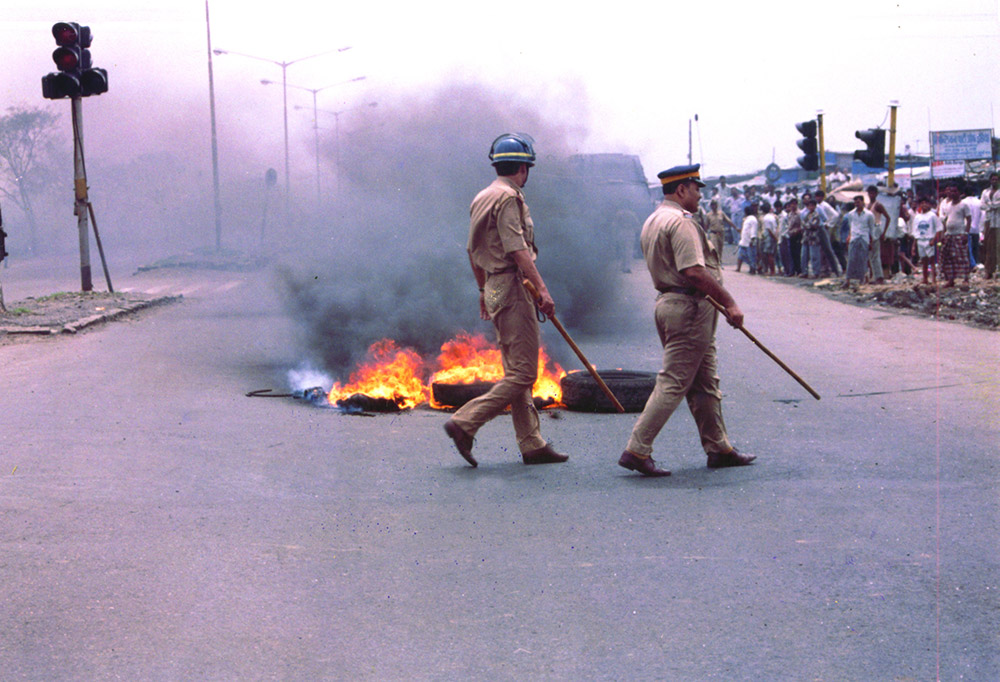 The documentary form lends itself to many different types of storytelling, but its most crucial purpose remains bearing witness to history. Especially the parts of history that those in power would prefer to erase. As such, the films of Anand Patwardhan are a record of India’s moral and systemic failings, written in indelible ink.

Patwardhan has been India’s most prominent and unapologetic documentary filmmaker since 1974. Through more than a dozen films and experimental videos in between, Patwardhan has painstakingly chronicled the country’s departure from its secular, pluralist ideals to the rise of “Hindutva,” the hegemonic notion that India is a Hindu nation.

It was a difficult task to choose one film from Patwardhan’s filmography to put in the spotlight, so I selected the one that feels both tragically timeless and especially urgent, as caste-based violence escalates across India and race-based violence erupts in America. Jai Bhim Comrade (2011) is Patwardhan’s exploration of the life and sudden death of his friend Vilas Ghogre, a Dalit activist (formerly referred to as “untouchable,” Dalit is the lowest position in India’s caste system) who used music and poetry as tools for resistance. The film begins in the aftermath of Ghogre’s suicide (following the massacre by police of 10 unarmed Dalits who were protesting the desecration of a statue of a Dalit leader), which sends Patwardhan on a journey through the contours and effects of India’s millennia-old caste system, and the ways in which it has become even more ingrained in the nearly 75 years since the country’s so-called Independence. The film is credited by the Human Rights Watch for “dismantling entirely any argument that caste discrimination is a thing of the past.”

Jai Bhim Comrade took 14 years to make, and only loosely follows a narrative arc. It is over 200 minutes long. It has none of the glossy style and structural discipline that we’ve come to demand from documentaries of today. But it has something far more important: intellectual honesty. For me, it is a critical reminder of the fundamental purpose of this form. Patwardhan’s lens has always had a singular purpose: to capture the inequity, the cruelty, the violence and also the resilience of post-Partition India.

While he is a National Award winner (a prize he returned in protest), Patwardhan is best known for his routine fights with India’s Central Board of Film Certification and the Supreme Court. It doesn’t help that fundamentalist armies frequently try to shut down his screenings, and major streaming platforms won’t carry his work for fear of arousing controversy. If Patwardhan is bothered by the censorship, both explicit and soft, he doesn’t show it. As a New York Times profile from writer Abhrajyoti Chakraborty revealed, when a recent university screening of his 2018 film Reason was disrupted by fundamentalist vigilantes who cut the power to the auditorium, the students quickly pivoted and played the film on a laptop with bluetooth speakers. As a young filmmaker, Patwardhan used to carry his own 16mm projector and reels for clandestine screenings of his most controversial works. Now, he carries DVDs of his films to sell to students and activists for a few hundred rupees (less than $3) each.

The continued commercialization of the documentary genre might make Patwardhan’s films seem out of fashion or inaccessible, but I believe future generations will be grateful for the testimony of his work, and the unflinching way in which he captured the ugly history of the world’s largest democracy. “This is why we need documentaries,” Patwardhan says. “At least they help keep some memories alive.”

Watch Jai Bhim Comrade for free on Youtube and the complete retrospective of Anand Patwardhan's films are now currently available on OVID.TV.

Smriti Mundhra is an Academy Award-nominated filmmaker based in Los Angeles and Mumbai. Her latest film, St. Louis Superman (2020), was nominated for an Oscar, shortlisted for a duPont-Columbia Award and won a Critic’s Choice Award.