Archives as Alter Ego: The Inventiveness of Kim Longinotto's 'Shooting the Mafia' 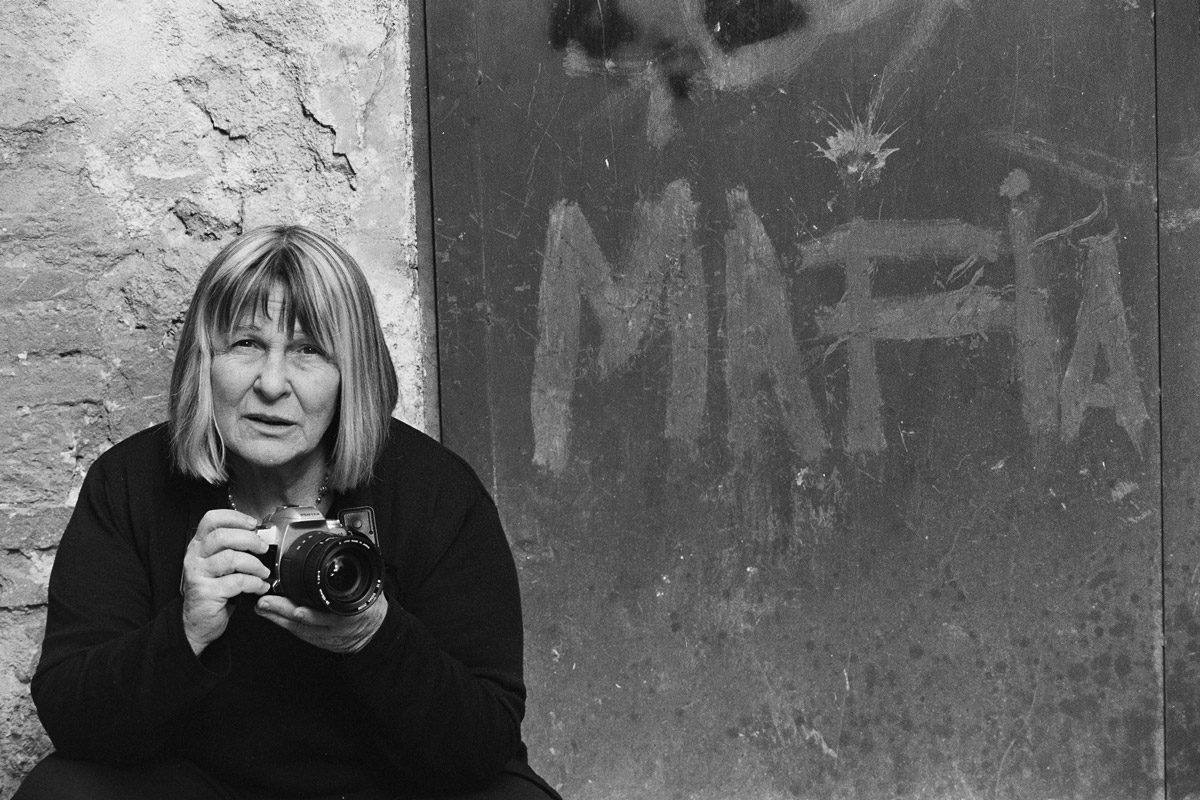 Imagine this: You’ve got a great subject who’s now in her 80s. You want to tell her life story—how she left her stifling marriage at age 40 and defiantly set out on a career. Not just any career: Newspaper photographer, a man’s job. In Palermo, Italy, no less, at a time when women stayed home, Mafia mayhem went unchecked, and a photojournalist’s job was to document the corpses piling up in the streets. You’ve got her images to work with, as powerful as anything by Weegee. But you have a problem: There’s virtually no photographic record of her. A few snapshots. Maybe 90 minutes of home movies that are mostly unusable. What do you do? How do you relate 60 years of adult life without it?

That was veteran filmmaker Kim Longinotto’s conundrum when faced with Letizia Battaglia, photographer for the Palermo newspaper L’Ora in the 1970s and ’80s, during the Mafia’s heyday. Adored at home, but unknown abroad, Battaglia’s story was ripe for the picking. Except for that troubling gap.

Battaglia fit right in with the British director’s predilection for female rebels and outsiders. Past subjects include a teen struggling to become a wrestling star (Gaea Girls), runaway girls in Iran (Runaway), female judges in Cameroon (Sisters in Law), Indian women standing up to rapists (Pink Saris), and an ex-prostitute rescuing girls from the Chicago streets (Dreamcatcher).

But all these films were vérité, with Longinotto operating camera in an intimate pas de deux with her subjects. And all these stories unfolded in real time before her eyes. Battaglia’s would not.

Archival footage had to be a necessary part of this project, which had been brought to Longinotto by Irish producer Niamh Fagan. (Impact Partners, Screen Ireland and Field of Vision would also partner up.) Archives would provide much-needed context—on the repressive paternalism that Battaglia faced in post-war Sicily, on the Cosa Nostra’s bloody grip, on how Mafia assassinations expanded to include judges and anti-Mafia prosecutors, culminating in the infamous murder of prosecuting magistrate Giovanni Falcone, who’d tried 475 Mafiosi in one massive trial, followed a month later by the car-bomb death of his colleague Paolo Borsellini. Battaglia knew these judges personally. She had skin in the game. One of the strengths of Longinotto’s Shooting the Mafia is how unexpectedly and seamlessly it leads from Battaglia’s personal journey to this larger chapter of Sicilian history known to every living Italian.

But before a single frame was shot, Longinotto had to decide to leave behind her usual modus operandi and enter the world of archival film. It wouldn’t be the first time. That was 2014’s Love Is All: 100 Years of Love & Courtship, a BBC/BFI doc featuring depictions of love from a century of British cinema. “That was so easy compared to this, because it was all from one place, the British Film Institute. We did it in seven weeks,” says Longinotto, sipping tea on a wintery day after the Sundance premiere of Shooting the Mafia. The latter took nine months for editing alone.

Seated beside her is editor Ollie Huddleston, collaborator on 10 films. He remembers the precise moment they decided to venture into archive filmmaking again. “We were at the airport,” he recalls. “We’d just finished Dreamcatcher, for which Kim had just won the Sundance directing prize, and All Is Love before that. We said, ‘Next time, why don’t we do one that joins the two together? Make something that’s both observational and archival at the same time. Really mess with time.’ ” Next thing they knew, they’d signed up to tell Battaglia’s story.

The living, breathing Letizia Battaglia is a force of nature who propels the film forward with her recollections and commentary, recounted during six weeks of interviews. It’s her voice that we hear when the film sketches out her childhood and marriage: An overprotective father who prohibited her from leaving the house, even to step out on the balcony, after a man exposed himself when she first ventured outside at age 10. Repressive nuns at boarding school. Marriage at age 16, where the nuptial bed was inspected for blood. (“You’ll do,” said a satisfied aunt, who then informed the entire family.) A suffocating marriage with its share of violence. A mental breakdown and Swiss clinic. A secret love affair. Then rebirth as Italy’s first female photographer at a daily newspaper. Three days into the job, she covered her first murder.

How to illustrate all this? Longinotto and Huddleston’s solution was, first, to use every frame possible of the young Battaglia. Second, flesh out those home movies with an alter ego constructed from archival material and classic Italian films.

That resulted in sequences like this: When the newly divorced housewife starts thinking about other men, there’s an 18-second clip of Battaglia looking seductively toward the lucky cameraman, then provocatively lying down in a wheat field, like a Sicilian Jane Russell. Cut to another short clip of Battaglia, here dancing with a man in a dark club. The footage is grainy and highlights blown out, but her radiant joie de vivre and sexual energy are unmistakable. Cut to actress Silvana Mangano dancing her famous dance in the 1951 film Anna. Flanked by Brazilian samba players, Mangano’s swaying hips and naughty looks inspired wet dreams for a whole generation of Italian men (as well as Nanni Moretti’s fond homage in Caro Diario). As the dance from Anna plays out in full, Sandi, one of Battaglia’s (many) ex-lovers, says in voiceover, “Letizia was beautiful and attracted men like flypaper.” That transitions to Sandi in the flesh, where he continues his recollections.

“Italy has this hugely rich film heritage, and using it to tell Letizia’s life story or to reveal her inner life—I was blown away by the idea,” says Clare Stronge, one of the film’s four archival researchers.

The work required on the film as a whole was formidable. “The Mafia is such a big story,” she continues. “We contacted hundreds of archives around the world. We could put out mass calls that accessed several hundred archives in one go when looking for something specific. But we had in-person contact with around 60 archives.” These ranged from Italian broadcasters to police precincts, from the Instituto Luce Cinecittà with its 100,000 films to the personal archive of one Giuseppe “Pino” Fredi, a guy with a camera on the Palermo streets.

Finding the Observational within the Archival

“History has been so diced up,” says Huddleston. “We wanted to reconstruct it and feed it back as real life.” The idea hatched at the airport—to make “something observational and archival at the same time”—went against standard practice. “That’s the thing about archive,” the editor says. “Producers tell you it needs to be a montage: ‘Shorten it.’ ‘Tighten it.’ ‘Make it emblematic.’ But we wanted to do exactly the opposite: pull it apart and make it real. It should be an emotional journey, about feeling what it’s like to be that person—like all the observational films we’ve worked on.”

“The big challenge,” Longinotto adds, “was not only to find the archive, but then to make sequences.”

“What we noticed is that a lot of material had been used in other documentaries, but it was always very chopped up,” says Stronge. “The shots were short, and there was a lot of music or voiceover. So we needed to go back to the original rushes. Then you got the sense that you were there in the room, like Kim was filming and you could experience it in a vérité style.”

Falcone’s funeral is a case in point. “We kept saying to Clare, ‘Imagine if Kim were there that day with a camera on her shoulder,’ ” says Huddleston. “ ‘Can you find us something where we actually feel like we’re in that place?’ The Falcone funeral is made up of 15 to 20 films. We wanted not only for it to be a state event—with the police and big shots of people clapping—but to see the impact on ordinary people. So we scoured tons and tons of films. There’s a couple of shots of men hugging. I know it doesn’t sound like much, but in context it was so important. You needed to see how his death affected people.”

The same observational principle applied when Battaglia’s photographs are shown. One photo of her first homicide shows a body, now days old, stretched out under an olive tree, while a uniformed officer stands nearby. Battaglia’s voiceover describes the fetid smell and how she shook with fear, while archival clips lead up to the photo and build a sense of menace: feet backing away; squalid alleyways; people hiding their faces, not wanting to see or be seen. “It’s what I call ‘archive as atmosphere,’ ” says Stronge, who sourced much of this footage from the 1965 documentary Con Il Cuore Fermo Sicilia by Gianfranco Mingozzi, a former assistant of Fellini. “The camera is almost like the Mafia, this thing that people see but avoid.” Clips of other countryside murders lead out of the photo, including a pair of eyeballs in a corpse’s hand. “A man with stone in his mouth, a cactus inside his jacket—all these weird Mafia symbols would have been seen by Letizia,” Longinotto notes.

Sometimes the researchers got lucky and could match Battaglia’s photos with on-the-scene news footage. They might follow the trail from a notation on a photographic print—a name or date—to L’Ora’s database and beyond. “Sometimes it was easy, like with the assassination of a big judge; sometimes not, like the murder of a prostitute,” says Stronge. At times, the photos themselves presented clues, like the name “Merina” graffittied on a prostitute’s stairwell, who’d been gunned down for freelance drug-dealing. “We got a RAI Palermo news report, and guess what’s in it? The footage you see in the film. We couldn’t believe it,” says Stronge.

“People never think about how you get the archival footage. They think it just magically comes,” Longinotto says. “But honestly, we went through hell with this. It’s the hardest thing we ever had to do. Like doing one of those big jigsaw puzzles.” Stronge calls Longinotto and Huddleston’s meticulous labor “forensic stitching.”

“The balancing of all the elements—archives, photographs, pop music, soundtrack, on-the-spot news—that was such a big number to pull together,” Huddleston concurs. “My back went, I was so stressed.”

“I don’t know how we survived. We had Post-its everywhere,” says Longinotto.

Huddleston nods. “But it all came back to a single woman, a woman living in a patriarchal society.”

Patricia Thomson writes about film for American Cinematographer. She was editor-in-chief of The Independent Film & Video Monthly from 1991–2001.