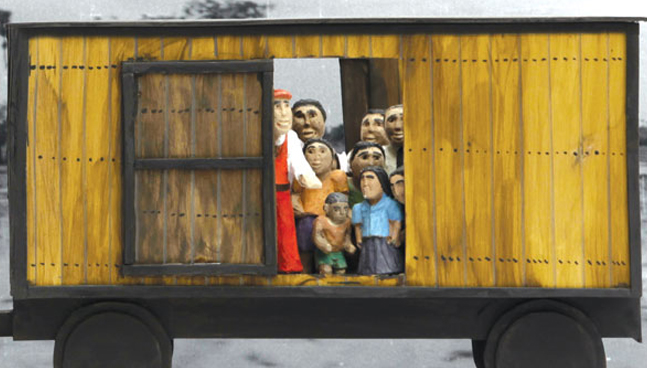 What hits you first is the charm. Filmmaker Rithy Panh makes adorable little clay people. He says Cambodians believe "a statue has a soul." His humble, tiny avatars evoke the clay pots we make soup in, grow flowers in, teach kids how to sculpt with. They remind you of the land, and in this very specific context, they represent the men and women killed by the Khmer Rouge in the late 1970s.

Panh's Oscar-nominated documentary The Missing Picture is populated with these little bodies, representing an entire culture that was destroyed when a quarter of the population died in just under four years. "Each figurine has a unique expression and perfectly portrays what I call childhood's innocence," Panh says. "That very childhood is at the core of the film."

Panh corresponded with me via email from Cambodia. The 14-hour time difference and his active production schedule precluded a conventional Skype chat. Panh responded to my questions in French (Khmer is his native language), and Chantal Chauzy, vice president of acquisitions at the film's US distributor, Strand Releasing, helped to translate them into English. Like his film, his statements feel as much translated as untranslatable. Panh is a master at these varieties of reprisal, exposing the universality of his ideas without slipping into vagaries or distraction. He graces the nooks and crannies of his subject the way light brushes over the curves of a face.

The Missing Picture is this generation's Night and Fog, Alain Resnais' 1955 meditation on the Holocaust; it acknowledges the tragedies of genocide by recognizing their incomprehensibility. "There is no explanation for genocide," Panh says. "The 1.8 million people killed is a lot, but at the same time it is impossible to represent. All the lost lives can't be summed up with a number. They were 1.8 million different stories, 1.8 million different identities." You could add up the tiny clay avatars, mathematically assigning one statuette to each prisoner killed by the Khmer Rouge, but even that math defies logic. In this universe, statistics lie.

Panh, a filmmaker, photographer and a sculptor, recalls the dates precisely: "from April 17, 1975, to January 7, 1979." It's a precise timeframe that swallowed his childhood, his parents, friends and family members—as well as their culture and memories. It was a precise time, during which, Path notes, "The entire country became a vast labor camp. Schools were closed, money was forbidden—love too. We were not allowed to travel or communicate. The country was disconnected from the rest of the world for nearly four years. During all this time, starvation, diseases, forced labor and executions took place in the name of utopia."

In the camps, all photography, moving or otherwise, was in service of the Khmer Rouge. Representations of individuals, either for record or recreation, are nearly nonexistent. This propaganda reveled in work; work as the ideal, work as the goal of life and order. This was the promise of the work camps; they were the realization of the ideal that work saves and as such, "the Khmer archives show loads of people working, but none talking to each other, none smiling," Panh explains. "For the Khmer Rouge, people are one single entity, one massive silent crowd—uniform, with no name, no identity." Panh's films all contradict the logic of the Khmer Rouge, embracing instead the varied perspectives and memories that make a life. "Only creativity can fight any attempt to erase things, which is the exact purpose of genocide [erasure]," he asserts. "Cinema, more than just entertainment, has become an essential tool in the work on and of memory. And that is what makes it so universal."

Panh's efforts with The Missing Picture are to create images to replace those Cambodia lost to an era in forced servitude. He only narrowly survived his time in the camps, surrounded by family and friends who dwindled from starvation, exhaustion and illness. He chose his avatars carefully, knowing this film would represent healing to him and the nation at large. "Creating characters that would take shape and would be brought to life through and with clay, earth, water, sun and wind—in the process of drying them—was the strongest and most powerful representation of our [Cambodian] beliefs and faith," he maintains.

"The idea of the clay figurines came by chance," Panh continues. "Or maybe it did not. I have always communicated with the souls of dead people. It is very hard to make a film about genocide without falling into voyeurism. It is even harder for a survivor like me to tell this story and keep the dignity of the people who died. Being a witness is not enough. The way I portray the characters is a means of fighting back the extermination imposed by the Khmer Rouge totalitarian regime."

The Khmer Rouge never acknowledged the genocide, nor did the survivors of these atrocities have justice served but, in 1997, the Khmer Rouge tribunal was erected to prosecute the surviving criminals. "Of course, justice won't solve all the problems, but it can at least acknowledge the victims," Panh notes.

"When I was a child, we did not have toys like kids have nowadays," he recalls. "Sometimes we would make wooden toys, sometimes we would go to the river to collect clay to make animals, wagons, houses, small characters...and we would make up stories. Unconsciously, I had to go back to my childhood to tell this story."

The Missing Picture is nominated for an Academy Award for Best Foreign Language Film. It screens February 20 at the Landmark Theater in Los Angeles as part of IDA's new The Art of Documentary series, a showcase supported by the Hollywood Foreign Press Association, of award-winning international documentaries. The Missing Picture opens in theaters March 19 through Strand Releasing.

Sara Vizcarrando is editrix of the release calendar at Rotten Tomatoes; a  film studies instructor; and a blogger for http://movieswithbutter.com

END_OF_DOCUMENT_TOKEN_TO_BE_REPLACED

The New Chinese Documentary: Building the Bridge between East and West