Crime & Punishment: The Sentencing Scene in 'When Claude Got Shot' 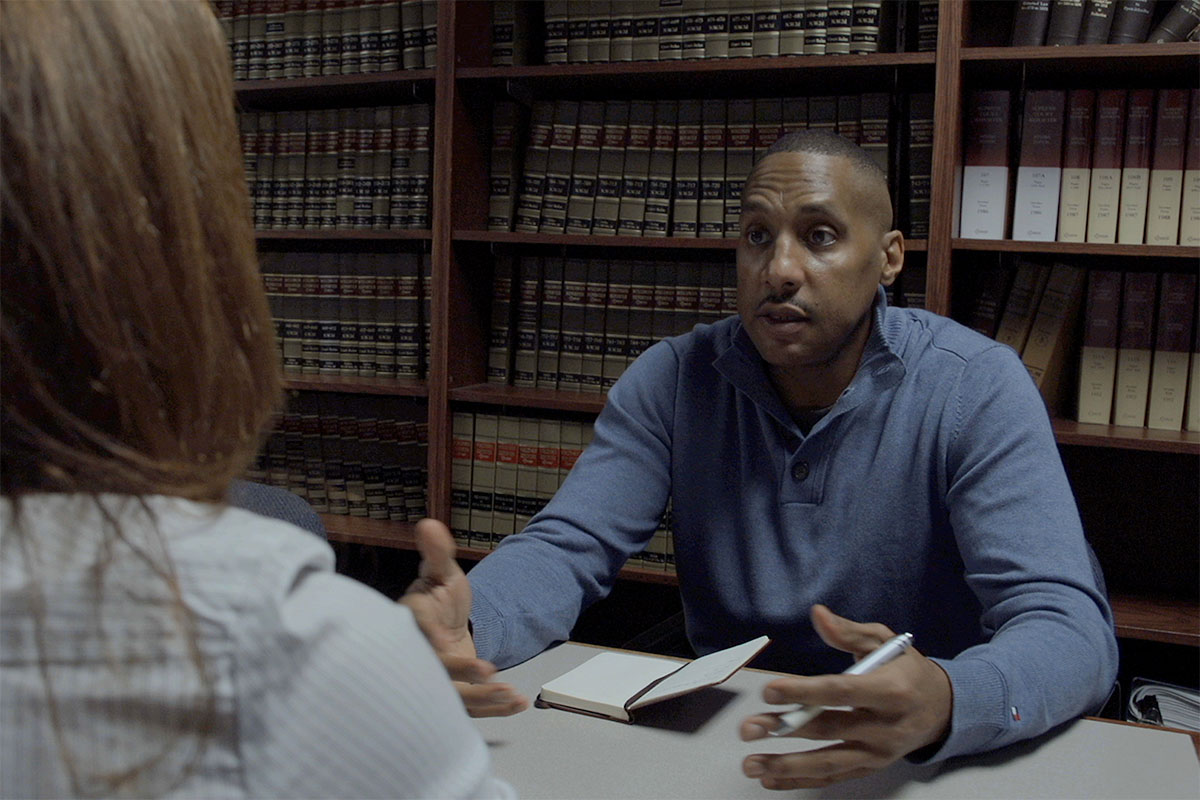 In 2014, Claude Motley got shot in the face during an attempted car-jacking in Milwaukee. The shooter was 15-year-old Nathan King. A few days later, Nathan would himself get shot by Victoria Davison as he tried to steal her car. That bullet paralyzed his legs. When Claude Got Shot toggles among these three protagonists in a deep dive into the juvenile justice system and the lasting physical and psychological effects of being shot.

Director Brad Lichtenstein had been close friends with Motley for 20 years when the shooting occurred. They met through a daycare center in which they both had kids. The Motleys had moved away from Milwaukee to live in a safer place, but every year came back to see old friends. The shooting happened during one of those visits. When Lichtenstein got word, Motley’s son Seoul was staying with him. Motley recuperated in the director’s house as well. Following conversations with Motley and Motley’s wife, Kim, Lichtenstein knew he wanted to follow the story. He was already steeped in conversations about youth and gun violence from his podcast on the subject, Precious Lives. But this shooting hit closer to home. What the director didn’t know then was that production would last five years, or how much Nathan, Nathan’s mother, and Victoria Davison would be woven in.

There are two key moments in the film. The first is Nathan’s sentencing. The second is when Motley goes to meet Nathan, one-on-one, in prison to bring closure. The sentencing scene “is the transition between the second and third act,” Lichtenstein observes. “The first act is unpacking what happened. The second act is following the juvenile system process, but also [following] Claude as he’s starting to lift his head up and see the bigger picture. The third act is once he decides the story’s not done after the criminal justice system has made its decision, and there’s more that he needs to heal. That builds towards the meeting between Claude and Nathan.”

Before going into the courtroom for the sentencing, the Motleys sit down in a private room to discuss what would be a just sentence. Kim Motley is a practicing attorney and was representing her husband. He’s well versed in the law as well, studying for the bar and working for his wife’s law practice. The day before, Kim had visited a detention center. In her opinion, he would never survive in prison, let alone be rehabilitated. “He’s going to be toast,” she tells her husband. Claude wants to hold Nathan accountable, but hates to see another Black youth fed into the system that incarcerates so many. He had his own troubles at that age and he empathizes. That nuanced conversation lays the groundwork for what follows.

Nathan is wheeled into the courtroom. It’s a different court than we’ve seen so far. Those were juvenile courts, but because Nathan had gone AWOL several times from home detention, he was waived to adult court for sentencing. The lawyers give their recommendations, then Victoria steps forward to say how this trauma has affected her emotionally. Motley is next. Wiping away tears, he admits he’s conflicted. In the end, he asks for leniency, as does the prosecuting attorney. But the judge has a different agenda and sentences Nathan to 20 years on each of the two counts, which ends up being 12-and-a-half years in prison and seven-and-a-half years on extended supervision. We catch a glimpse of Nathan’s mother, Regina Ragland, as she’s wracked by sobs.

The scene continues in the hallway. Held up by a relative, Regina continues sobbing as Nathan is wheeled past on his way to prison. The camera swivels to see Motley with his family, watching. His face is an open book. He’s clearly troubled and wipes his face in resignation and despair.

The room in which the Motleys had their pre-sentencing conversation was small and cramped, with no room to back up for a wide shot. “It was a difficult scene to shoot,” says director of photography Colin Systma. “Claude was very nervous and playing with a paper clip, which ended up being a cutaway.” He notes, “It goes to show how meaningful cutaways are and how they’re often more telling than what’s actually going on. I was struggling to shoot the scene, and that cutaway tells you all you need to know.”

The director got advance permission to film inside the courtroom. Despite this, the bailiff denied them entry when they arrived with a camera. Because there were 10 other news teams wanting access, the judge decided to let in only one broadcast camera and pool video through its SDI port.

But that presented an additional problem. Systma was using his new Sony NEX-FS700, but “There isn’t an SDI input on the Sony FS700, so you can’t record to the camera from a broadcast pool camera,” the cinematographer explains. “We tried to record their SDI out with an Odyssey 7Q recorder, which failed.” So they had to punt.

They wanted complete and uncompressed footage from the pool camera. “Most news stations make it very difficult to get this,” Systma says. “Brad peeled off at one point saying, ‘I have to get this somehow.’” The director called a reporter and she connected him with the pool cameraman. Lichtenstein says, “He gave her the footage on a drive and she gave it to me, literally in a parking lot. Just to make matters more dramatic, it was raining! It was like a scene from a film noir.”

To get the desired shots inside the courtroom, Lichtenstein had explained to the pool cameraman what they were doing and asked if he could follow Motley and Davison before and after their statements, as well as capture the mother’s reaction. “He was very cool with it,” the director says gratefully.

Meanwhile, Systma sat in the corridor listening to the proceedings through a sound thread wired in from Motley’s lavalier mic, waiting for that moment when everyone would exit the courtroom.

“I work with Colin a lot,” Lichtenstein says, “so I’m in the enviable position of trusting my DP and not giving a lot of direction.” Except in the hallway, Lichtenstein spotted Claude reacting first, because Systma had the camera up to his face filming Nathan’s mother. Lichtenstein recalls whispering, “‘Don’t turn until you’re ready, but Claude is behind you.’ To Colin’s credit, he made it all one continuous shot.” Lichtenstein adds, “All Claude’s internal drama is written on his face in those eight or nine seconds.”

Going forward, the sentencing scene became the centerpiece of the fundraising trailer. “It shows the shortcomings of the criminal justice system all in one compressed moment. You have Claude, who, as the victim, was told repeatedly that his voice mattered in this process. But when he took the time to consider and speak up about sentencing, he was ignored by the judge,” the director notes. Up to this point, “You’ve been so intimately connected to Claude, Nathan and Victoria. In that scene, you see how the system takes over.” 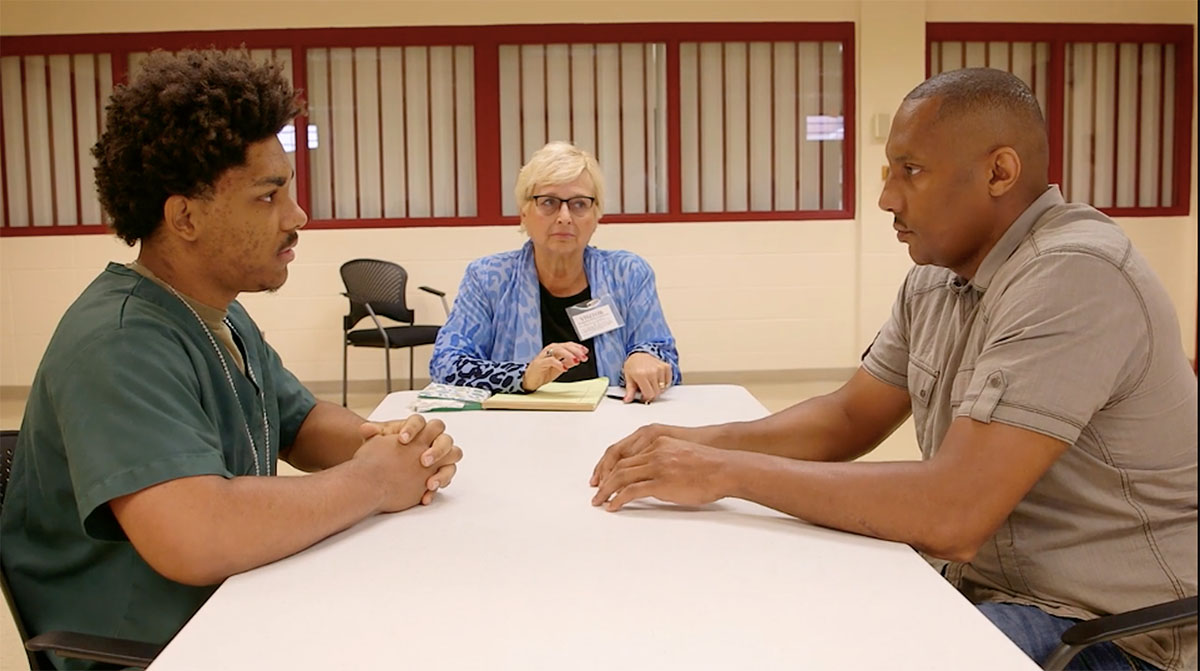 By happenstance, Systma had bought a brand new Sony FS700 a few days before Motley was shot. So they could immediately leap into production without waiting for funding. For the film’s vérité parts, the camera was coupled with a Canon 24–70mm f/2.8. A Metabones Speed Booster was mounted between the camera and lens, which allows an extra stop of light and makes the lens wider. It enables one to use more of the glass, which can be beneficial when one has full-frame lenses. The camera was paired with a Atomos Ninja II recorder to be able to record ProRes 422 HQ. Systma also used an Alphatron SDI Electronic Viewfinder.

The Question of Race

As a documentary filmmaker, Lichtenstein was acutely aware of issues surrounding race, representation and power. “Being a white filmmaker making this film about community violence is not a place where I should be, if not for the fact that I’m one of Claude’s best friends. A place where that played out in tangible ways was the relationship with Nathan.”

It was clear the teen was wary of Lichtenstein and his team. So Lichtenstein turned to Keith Walker, a Black cinematographer who was also working on the film. It was Walker who filmed the one-on-one between Nathan and Motley. In Systma’s view, “That scene ended up being better because Nathan felt more at ease with a Black DP instead of just two white guys with blue eyes.” He adds, “Diversity in filmmaking is super important. That incubates better scenes.”

From his perspective, Motley wanted his old, trusted friend to make this film. He told Lichtenstein, “My goal was to let people see me as a person, not as a news story, a headline or a statistic.” This deeply personal film does just that.

When Claude Got Shot makes its broadcast debut on PBS’s Independent Lens on May 9 at 10:00 p.m. ET. The film will also be available on PBS.org and the PBS Video app.