Shooting Scenarios is a new column that takes a single scene and breaks it down cinematographically, looking at shooting logistics, creative challenges, and camera gear deployed.

The most nerve-wracking sequence in David France’s Welcome to Chechnya is, without doubt, the rescue of Anya. It comes midway through the HBO documentary that premieres June 30, so we’ve already met the Russian LGBT activists who help Chechen gays and lesbians flee the republic’s anti-gay purge. We’ve heard historical context, seen horrific trophy videos of assault and murder, and spent time in the secret shelter where queer refugees await visas. Now we get to witness an actual extraction from Chechnya—the mechanics, the risks and the bravery involved.

The target is Anya (a pseudonym), whose plight is revealed at the film’s start: Pleading for help in a phone call to Russian LGBT Network crisis response coordinator David Isteev, she explains that her uncle is threatening to reveal her lesbianism to her father—a high-ranking government official—unless she has sex with him.

The operation begins in a fast-food restaurant. Their cover story is that Anya is meeting two family friends who are taking her dress-shopping. Playing the “aunties” are cameraperson Alexandra Ivanova and a female activist. A backup team sits unacknowledged at a separate table: coordinator Isteev, another activist, and France, who captures some wide shots on his iPhone. (The film’s cinematographer, Askold Kurov, stepped aside for this mission since its cover story required a female camera operator.)

Anya arrives and Ivanova films the meetup surreptitiously on a GoPro. After some chitchat, the women leave by taxi for the airport. A checkpoint is en route. Here security guards inspect passports and sharply confer about one. The moment is extremely tense. Nonetheless, a camera inside the cab keeps recording. Afterwards, the activists reunite at a meeting spot, where the women change clothes and Anya’s phone is destroyed.

The next nail-biter is at the airport’s Passport Checkpoint. Everyone’s nervous, knowing that at any minute Anya’s name could appear on a federal wanted list. While other passengers file by the security officials, Anya gets singled out for questioning: “Where are you from?” “What’s your purpose of travel?” “How long will you stay?” Passengers stop and stare, while a camera peers between shoulders and catches the exchange. Then it’s over, and Anya is free to go.

To remain inconspicuous, only amateur camera gear was used on the film. (France did insist, however, on 4K for “cinematic lift.”). The main camera, operated by Kurov, was a Sony FDR-AX100 handycam. “It’s got a beautiful lens on it,” says the director, “but it looks like a toy. We beat this thing up a bit, put tape on it, disabled all the red lights, and made it look like it belongs to somebody’s child.” Or a tourist. “In case we got caught, that’s what we’d say we were.” When in public, Kurov would frame picture and control settings remotely, using a smartphone app. “Everyone in Russia is buried in their phones,” says France, so Kurov following suit wouldn’t raise any suspicions.

For Anya’s rescue operation, the Sony stayed home. Instead, they deployed France’s iPhone X and a GoPro Hero6. Quite popular in Russia,

“GoPro is a camera everybody can have, with no questions asked,” Ivanova says. “I decided not to use any special equipment or hidden cameras—for example, a camera in your eyeglasses. In Russia, this equipment needs certain certifications and permissions. Without them, you could be considered a spy and spend many years in prison. There’s been an enormous amount of such ‘spy’ cases since 2014.”

The plan was for Ivanova to control her GoPro with a smartphone app, like Kurov did with his Sony. But a problem surfaced the night before the rescue. For security’s sake, Ivanova needed to use a burner phone rather than her own. “I tried to install the app, and it didn’t work.” That meant Ivanova was sneaking peeks or shooting blind throughout the operation. To make matters worse, the GoPro screen would power off after one minute. Despite this, she managed to capture all the essentials.

At no time were lights or external sound gear used on the film, with two exceptions. A lavalier mic (considered professional gear, thus suspect) was used when safely inside the shelter. And they purchased one small LED panel—a Yongnuo YN-160 III—for shooting inside dark rooms or cars at night.

Before Anya even set foot in the restaurant, Ivanova got a warning scrawled on a napkin. Isteev had dropped it there on his way out; according to plan, he and the backup team left right before Anya’s arrival. “It said that people in the café saw the camera and had become nervous about it, that I should hide it better,” Ivanova recounts. So she held the GoPro low, shielding it with her other arm, or made sure to tuck it behind a coffee cup. “It was my greatest fear: that I could blow up the whole operation. It’s a human life, and she only had this one chance to run.” Adding to the pressure, “At this point, there’s no second camera inside, so everything was on me.” 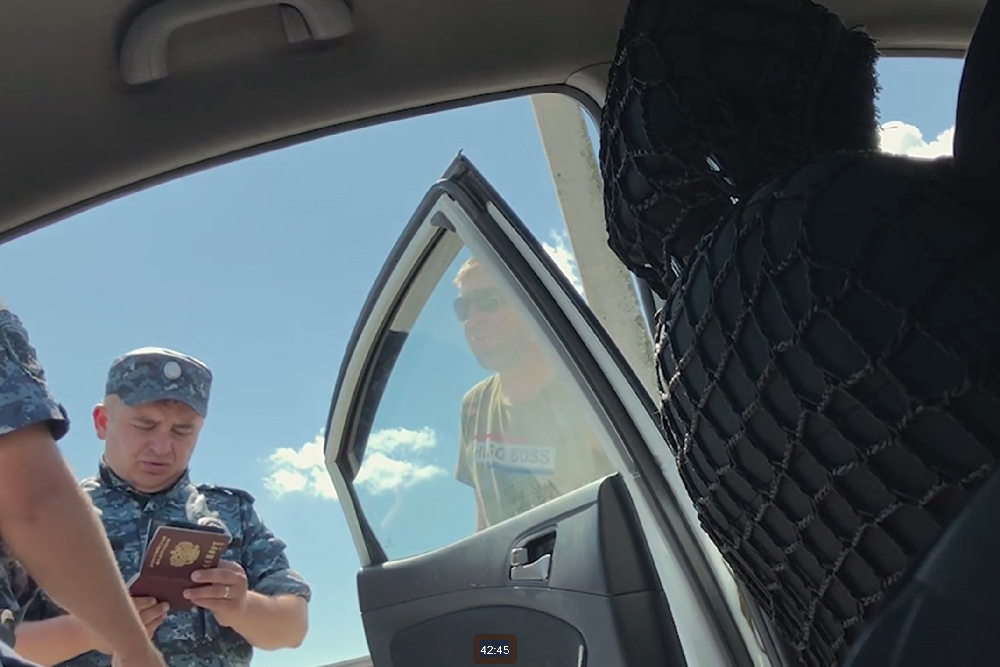 The next stress came at the roadside checkpoint, when security guards are troubled by one passport. What’s not obvious in the film—though not on purpose—is that this shot was taken from the backup team’s taxi, not Anya’s. “It was my passport they grabbed, and my passport they argued over,” says France, who managed to capture this nail-biting episode with an iPhone clutched between his knees. “Anya and her car of dress-shoppers got through. We were stopped, and because I was an American in this incredibly hermetic part of the world, they pulled me out of the car and brought me in for questioning.”

When interrogated, France recited his well-rehearsed alibi: “I was an insane rich guy who was a rabid fan of the Egyptian football team that had just traveled through Chechnya. So I was following the footsteps of my heroes.” His companions were two guides he’d hired. France even had a decoy phone with proof: downloaded soccer-fan photos and videos, stats about the Egyptian team, vistas with his tour guides. (Before getting out of the cab, he dropped his own iPhone X on the floor.) “It was an insane proposition, but the cover story worked,” France says. “They thought I was some sort of crazy nut.”

None of that is included in the film. “It’s not a story about me,” France says simply.

At the airport, photography is not allowed, though authorities tolerate selfies. “So I became a selfie queen,” says France. “I appeared to be smiling at my own image” while actually grabbing shots over his shoulder.

Where photography is strictly forbidden is at passport control. Agents warned Ivanova she couldn’t film. “I said ‘Yes, okay!’ and continued shooting after a moment. You can just put something like a book on top of the GoPro and it becomes invisible.” She adds, “You can always tell them you didn’t understand.”

People and footage had to be protected at all costs. Like other refugees, Anya had her face replaced with a “digital veil” in post-production (see “In Digital Disguise”).

On location, the team followed strict protocols with footage.

Data was immediately moved off-camera cards and loaded in triplicate onto encrypted drives; one was smuggled out of the country and two remained hidden in Russia.

“It’s not legal to encrypt in Russia, so we were taking a risk,” France notes. Afterwards, the cards would be wiped clean. “We weren’t just erasing cards; we were overwriting them to make the data irretrievable.” Once the encrypted hard drive arrived in New York, they’d send word back to Russia to overwrite the two remaining drives.

Every step of the way, things were air-gapped to defend against hacks. When transferring data from a card, for instance, that computer would have its Wi-Fi card removed and Bluetooth disabled.

“The computer did not have the capacity to touch the internet,” France says. Nor did the editing and VFX suites in New York.

Reflecting on his participation in Anya’s rescue, France says, “I don’t think I’ve experienced anything as harrowing as that in my life. Being there made me feel like I’d been sent back to the French Resistance. I felt the lack of any sort of safety net, and that was very frightening. I was thankful we were able to capture that.”

For her part, Ivanova received some visitors after several expeditions for the film. “Some strange people came to my flat and spoke with my mom. So I decided to lay low.”

It’s not gone well for Anya. After six months of quarantine in a safe house awaiting a visa, she lost hope and left. The activists don’t know where she is, but, according to France, “They’ve been told she’s alive.”

END_OF_DOCUMENT_TOKEN_TO_BE_REPLACED

Most Def: Take the Hi Road When Shooting Your Next Doc