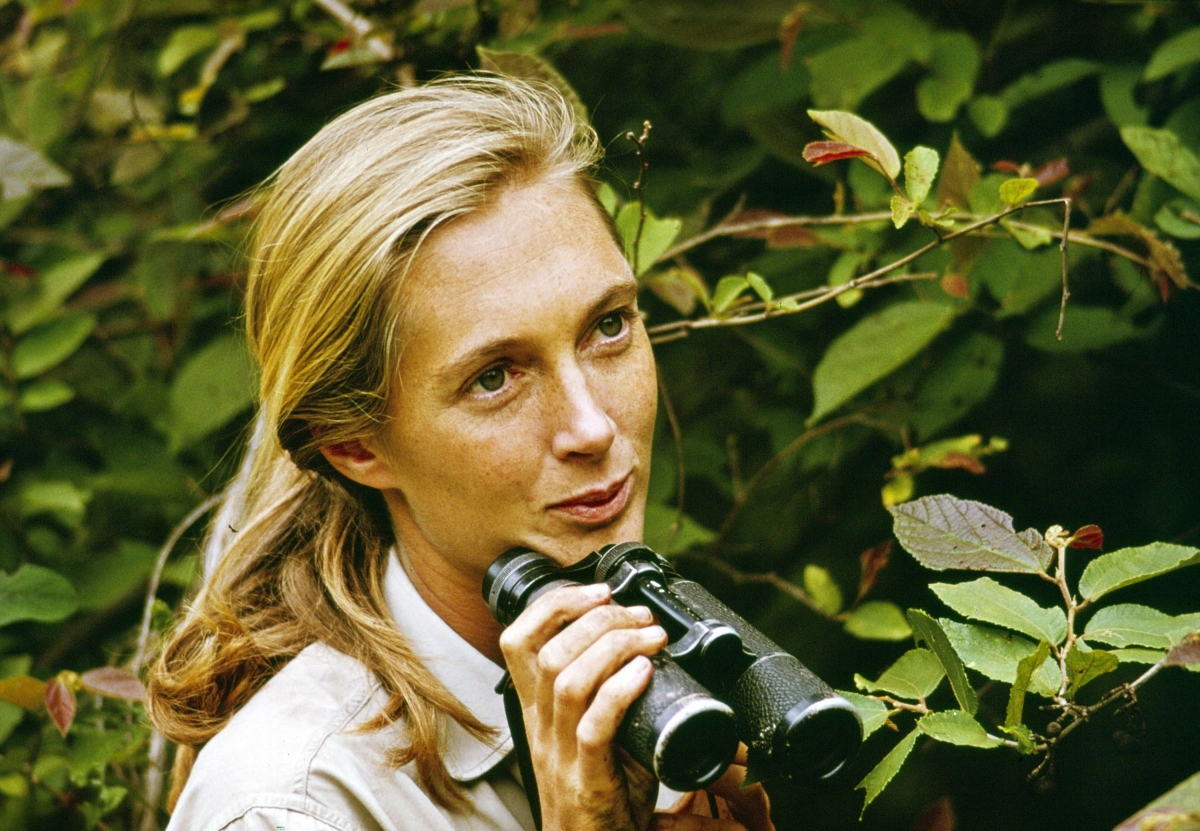 "Going to Africa, living with animals—that's all I ever thought about," Jane Goodall discloses in Oscar-nominated director Brett Morgen’s latest doc, Jane, which employs over 100 hours of never-before-seen footage (recently discovered in 2014) shot in Tanzania's Gombe Stream National Park half a century ago. Back then, the 20-something female scientist, whose main qualification seemed to be her love of animals over the comforts of human civilization, was at the very beginning of realizing her lifelong dream come true. So it seems nearly preordained that the cameraman that National Geographic would send to document the young Goodall's astonishing interactions with a community of chimpanzees, Hugo van Lawick, would end up falling in love with the extraordinary woman in front of his lens.

Documentary had the privilege of speaking with one of nature's true protectors about these early days and more right after the release of the film that bears her name.

How did you come to get involved in this project? What convinced you that the film's director, Brett Morgen, could do justice to your story?

Jane Goodall: At first I was not at all interested. "Not another documentary," I thought. So many have been made, and my life is so busy. But I was promised it would take only a few hours of my time, and that it would benefit the chimpanzees and the Jane Goodall Institute (JGI).

So I agreed. And when Brett and I sat down to talk, I soon realized how committed he was to telling my story in a new way. And I also realized that it would be wonderful to show never-before-seen-footage taken by Hugo of those early days at Gombe. And so the "few hours" turned into three days of interviews—and my faith in Brett has been more than justified.

Where and how was this treasure trove of archival material found?

The archives were found in a storage facility. It was not so much lost as forgotten—and then discovered quite by accident, I was told.

What does it feel like watching your younger self onscreen? Pleasant? Unnerving?

Watching the footage took me right back to those wonderful days at Gombe. More than any other documentary, I found I was actually reliving my time in the forest and my relationship with those chimpanzees I got to know so very well—David Greybeard, Flo and her family, Mr. MacGregor and the rest. Those days were the best in my life, and Brett's vision has brought them vividly back to me. It is a very moving experience every time I watch the film.

Your mother accompanied you on your first expedition to Africa—and you and Hugo raised your son in the wild early in his life. How do you think living so far from human civilization affected your relationships, both positively and negatively?

From my earliest childhood I loved animals, and [I loved] watching them in the garden and on the cliffs above the sea where we lived in Bournemouth, England. The books I loved to read as a child were about the natural world, and from the age of 10 I dreamed of living in Africa.

With nonfiction filmmaking there's always the question of whether a human subject acts differently—"plays to the camera," as it were—in front of the lens. The simple act of being watched can alter a person's behavior. Which made me wonder if perhaps the very fact of your watching and interacting with—and Hugo's filming of—the chimps in Gombe might have also changed their natural behavior in any way, and how.

It took a while for the chimpanzees to accept me. When Hugo came, they accepted him much more quickly. He was just another of those odd white apes, and they had decided we were neither frightening nor threatening. The camera was just one more bit of equipment; I don't think it was any different for them than the use of binoculars. They were not self-conscious in front of the camera lens.

Watching your friendly interactions with the chimpanzees made me a bit uncomfortable, to tell you the truth, wondering if perhaps this was the opening of Pandora's Box. I mean, historically, wild animals that grow comfortable around humans often end up destroyed by them. (In the doc you’re even asked directly whether the chimp polio epidemic you witnessed might have been a result of human contact—to which you responded, thankfully, that it hadn't.) Though you've dedicated your entire life to conservation and animal welfare, do you ever have any regrets looking back? Anything you wish you could have done differently?

We realize today that the banana feeding changed the chimpanzee's behavior; they visited one area far more than they had previously. Their normal foods are seasonal, so that they move around within their home range throughout the year. Our feeding station meant that individuals met frequently who might otherwise have interacted only occasionally, for chimpanzees do not travel around as a troop as do most primates. (It was interesting that when we stopped the feeding, many years ago, the chimpanzees immediately reverted to their original pattern.)

But if we had not introduced the bananas, Hugo would not have gotten good-enough footage to ensure continued funding from the National Geographic Society, and the study would have come to an end. And those days, when I could observe the different individuals so regularly, and from such close quarters, taught me so much about their behavior and personalities. I could document the development of infants and their relationships so regularly. That is something I cannot regret.

There was no concern back then about the transmission of disease from us to the chimps; no one was thinking about it. Today the study continues with Africans and students from other countries, carrying on collecting the long-term case histories of so many individuals, many of them the descendants of my original friends. They maintain a distance of five meters from the chimpanzees. And the chimpanzees are safe because, from very early on, we employed Africans from the villages surrounding Gombe to help with the research—and they have come to care for the chimpanzees as individuals; they share their understanding with the villagers.

Jane, which opened in New York and Los Angeles October 20 through National Geographic Documentary Films, will continue to screen in theaters across the country through December.