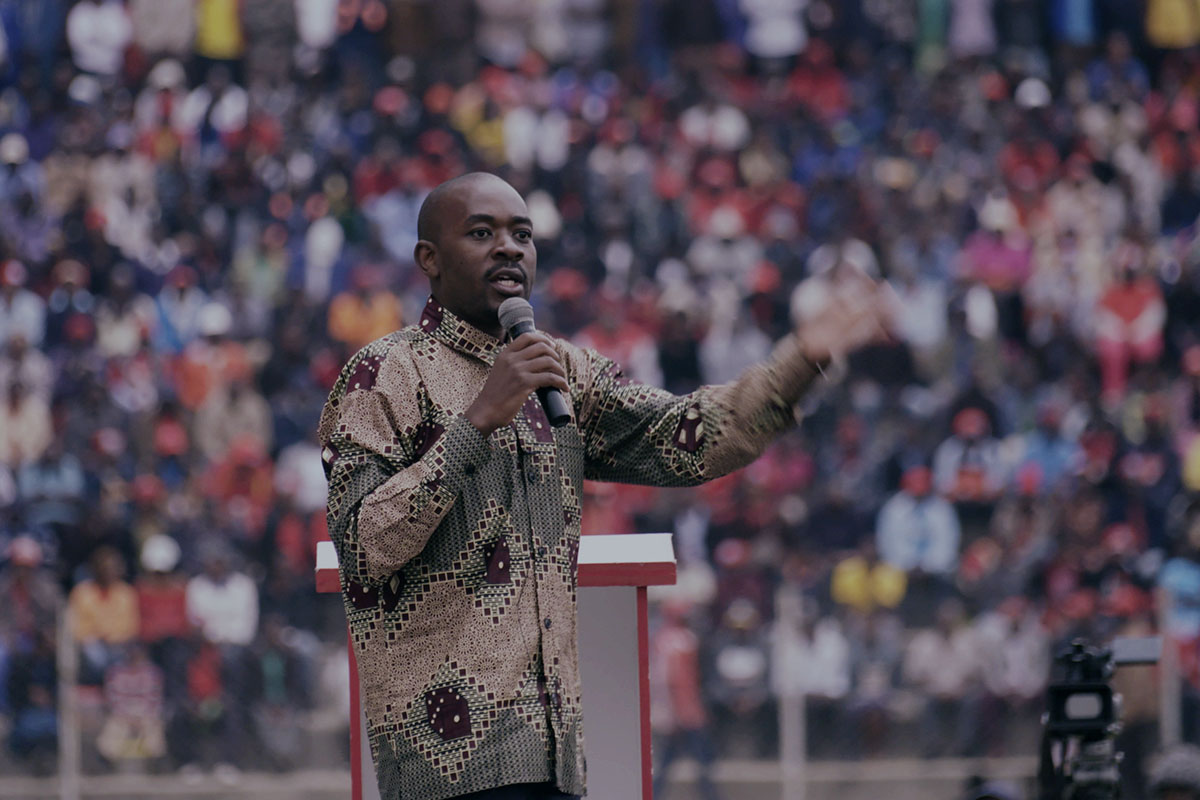 One of the timeliest films of this past year—having premiered in the World Documentary Competition at Sundance 2021 (where it would go on to win the Special Jury Award for Cinema Vérité Filmmaking) mere weeks after the January 6th insurrection at the US Capitol—Camilla Nielsson’s President follows a 2018 campaign season filled with accusations of rampant voter fraud and a corrupt election commission, which ultimately culminates in an explosion of violence. Except in this particular case, the aforementioned nefariousness took place in the African country of Zimbabwe, where there is no “big lie”—only heartbreaking truth.

And at the heart of President is one remarkable man on a dangerous mission to speak truth to power. Nelson Chamisa, leader of the MDC (Movement for Democratic Change), is on a Sisyphean quest to topple Emmerson Mnangagwa—aka “The Crocodile”—a one time ally, now nemesis, of the nation’s notorious former dictator, Robert Mugabe. Deploying listening, rather than speechifying, as his secret weapon, the young and charismatic Chamisa addresses his countrymen’s desire to be “led and not ruled,” and to upend Zimbabwe’s long history of “selection, not election.”

So was Chamisa successful? And what does “success” even mean in an authoritarian state? Fortunately for Documentary, we were able to put several of our questions to the deep-thinking freedom fighter himself, who found time between his current campaign stops to serve as our December Doc Star of the Month.

DOCUMENTARY: It strikes me as a bit of a risk to let a European filmmaker—one whose previous doc Democrats had initially been banned in Zimbabwe—follow your campaign. Did you have any specific concerns going into this project? Why did you even agree to participate?

NELSON CHAMISA: Camilla’s previous film Democrats was a huge success here, and is still very popular amongst Zimbabweans. As such, the decision to work with her and her team again was not a very difficult one. From our previous experience, it was clear that she was very skilled, and worked in an observational way that did not interfere with our activities, while simultaneously recording important moments in our struggle for democracy and human rights in Zimbabwe.

Also, given the political situation in Zimbabwe where critical or dissenting voices are often facing imprisonment—or even worse, risk being killed for not toeing the line with the ruling party—you could say that in a way we consciously used the fact that Camilla is a foreigner as a form of agency that allowed us to get our story out. She’s protected under a different set of international laws than a local filmmaker would be.

We wanted our story told, and particularly to reach a global audience. Since the military coup in 2017, a very distorted narrative of Zimbabwe’s new dispensation has been told by the regime; unfortunately, the international media has become the greatest consumer of these lies. This film presents the first chance we’ve had to have cameras record our lived reality.

It is therefore, in our peculiar context, not only not the right question to ask whether we could tell our own story given the circumstances, but also to question whether the world would even be willing to listen to our young African voices—those that are fighting a regime that the hegemonic powers are desperate to believe represents a departure from Mugabe.

D: I’m curious about the boundaries you set, either for personal reasons or for safety. What was off-limits to the camera?

NC: We had set some ground rules from the beginning, and both parties respected them throughout the filming process, though I won’t go into detail here about what was off-limits for the camera. But if you have seen the film, I’m sure you will agree that we allowed for great transparency.

The camera was present even in very sensitive situations, and during negotiations where a lot was at stake. Of course there were boundaries, but we had agreed on a discrete signal that was given to Camilla when there were things that we wanted to keep off camera. The filmmakers respected that, and stopped recording when the signal was given. They would often stay in the room with sound and camera turned off, and silently resume filming when given the “go” signal.

We were also provided with the opportunity to watch the edited film before its release at the Sundance Film Festival. That was in order to make sure that in terms of our safety, no one was saying things in the film that would put them unnecessarily at risk—or at more risk than we already are. Speaking truth to power is of course never safe, but we knew in advance what was in the film from all the recordings that were made; it’s a calculated and agreed-upon risk that we take collectively.

D: I’m also curious to hear if you think working with Camilla on President affected your actual presidential campaign at all. On the one hand, having an international spotlight on you might ultimately afford some protection. On the other hand, it could also open you up to charges of “Western influence.” In what ways did the camera affect events on the ground?

NC: Our campaign was not changed or influenced by Camilla’s cameras for a number of reasons—chiefly that we were all too busy to even notice her camera. Charges of “Western influence” are a political statement that the regime would use with or without an excuse or justification. Doing things this or another way would not protect us from the false allegation. We had to weigh other variables.

Though we understand the importance of telling our stories ourselves, we don’t want our agency to again be undermined with a dismissal and disregard for our trust and confidence in this filmmaker. After being side by side with us for years filming the democracy struggle, and working alongside us for justice in our courts, Camilla has realized and shared a significant part of our story.

D: Social media is such an integral part of politics these days—and a double-edged sword. While it can allow candidates to sidestep state-run media and connect directly with constituents, it’s also a conduit for massive disinformation campaigns. What’s your relationship to social media? Does the good outweigh the bad for you?

NC: Social media, in the context of Zimbabwe, is very important as state-controlled media already outweigh all other mediums.

Its utilization in Zimbabwe was already very difficult given that the regime does not allow us many freedoms, including the freedoms of association and expression. This has been the case for the last 40 years, but, recently, it has become even harder for Zimbabweans to tell their stories even on social media. The regime has just instituted a new law that makes it illegal for me to even provide this response; the law views it as a negative story about the government. We are not allowed to criticize the government at all. The law is known as the Patriotic Act, but is designed not to protect the country and its integrity, but to prevent the use of social media to criticize the government.

D: Finally, what advice would you give to filmmakers from colonialist countries coming to Africa to shoot their films? Are there any cautionary tales you’ve witnessed?

NC: This is a great question. But the fact of the matter is that since the international excitement about the military coup d’état in 2017 ended, Zimbabweans have continued to be killed with impunity, and total silence has been the response. International media are no longer interested in the stories of Africans being killed and abused by their regime. And the regime has become more punitive under the veil of international media darkness. Unless someone watches our story in this film, they are likely to believe we’re living in a society being normalized into democracy.

In our situation, therefore, the cautionary tale of an oppressed people is, in the words of Nelson Mandela, to do what is right and necessary to stay and live to tell the story; the battle is for freedom, and not just the ideals of decolonization, that are sometimes too thinly defined by race and place of birth.

This film is a deep testament to the struggle for decolonization by both superpowers and local mercenary governments. It also speaks to a people-to-people solidarity of the North and the South, in the same way Mandela’s ANC partnered with many in the North to end apartheid. This happened because their story was told. Independent filmmakers are some of the few people who actually cared enough to tell our story, the real story. What’s become important to us is that they earn their credibility and our trust.

Tags:
Doc Star of the Month
Docs about Politics

END_OF_DOCUMENT_TOKEN_TO_BE_REPLACED

'And She Could be Next': A New Look at Women of Color in Politics

The Battle for the Ballot: 'All In' Traces the History of Voter Suppression