Doc Stars of the Month: Leah Smith and Joe Stramondo, Rachel Dretzin's 'Far From the Tree' 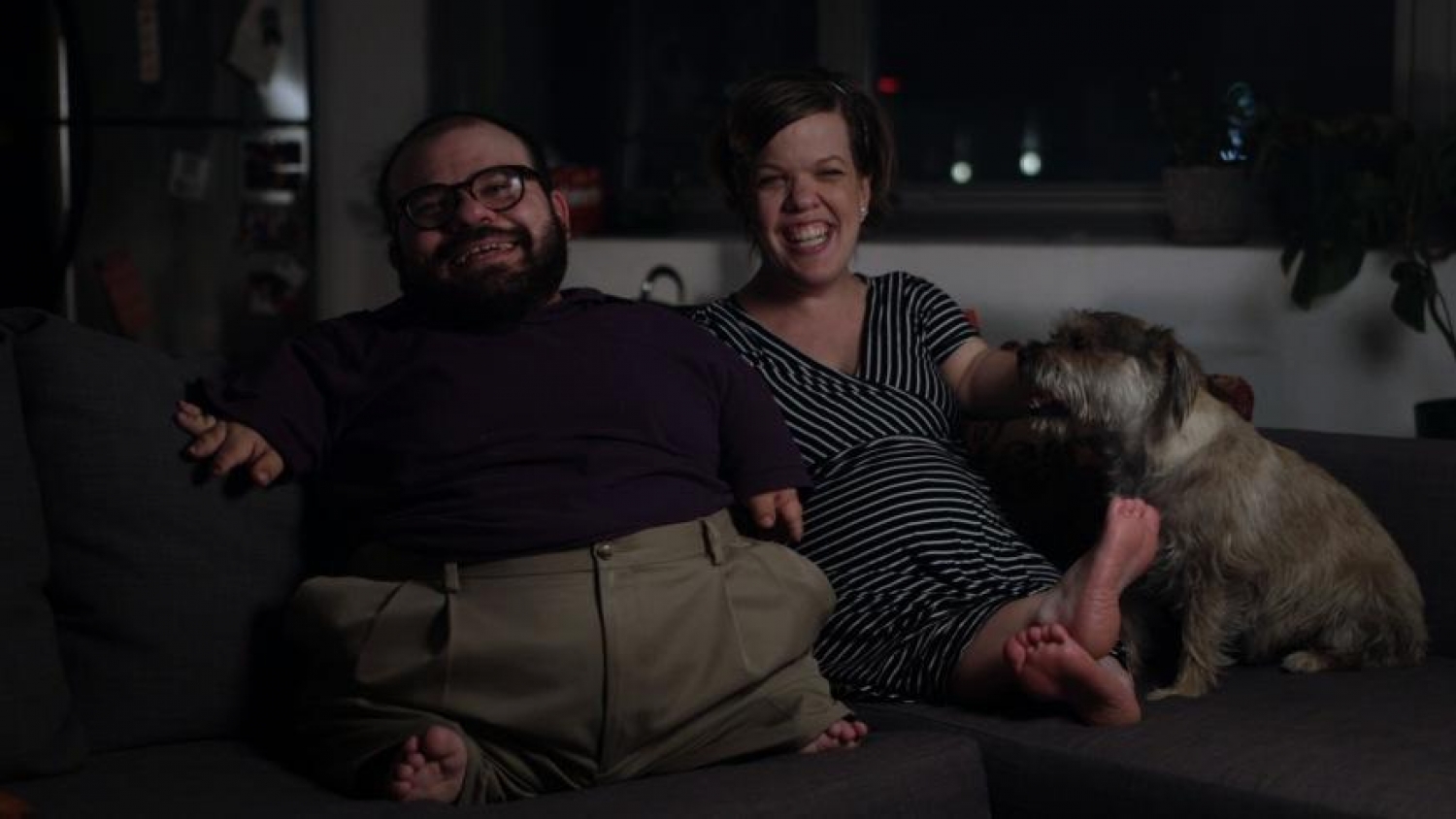 Leah Smith defiantly refuses to believe she needs to be "fixed." A media and entertainment advocate for the Center for Disability Rights, who holds degrees in both public relations and political science (as well as a master’s in public administration), Smith is one of several preconceived notion-upending characters in Emmy Award-winning documentarian Rachel Dretzin’s Far From the Tree. An adaptation of Andrew Solomon’s widely lauded 2012 bestseller Far From the Tree: Parents, Children, and the Search for Identity, the film is a lovingly rendered deep dive into the lives of families with challenging children quite dissimilar from themselves. It's also a radical manifesto of sorts, a visual plea to society to stop pathologizing those who fall outside our arbitrarily decided norms.

Certainly, Smith, together with husband Joe Stramondo (an assistant professor of philosophy at San Diego State and a longtime activist with a variety of disability rights organizations), are the film's most academic couple—and the most fun-loving and deeply satisfied duo I've seen onscreen all year. Unfortunately, however, Leah and Joe—both dwarfs who absolutely do not "suffer" from dwarfism—also happen to be delightfully unconventional individuals whose very identity might be "cured" out of existence in a not-too-distant day.

Needless to say, it was an honor to have both these role models provide their words of wisdom to Documentary prior to the film’s July 20th theatrical release, through IFC Films and Sundance Selects.

First of all, congratulations on the second child! Both of you come from families in which you're the only little people. So what, crucially, did your parents do to contribute to your success—and what lessons are you looking to pass on to your own kids?

Leah Smith & Joe Stramondo: In both of our cases, our families contributed most to our success by setting really high expectations for us, despite the fact that the rest of world didn't always share those expectations. There are deep stigmas around disability, such that much of the public usually assumes that people with very different bodies are presumed to be incompetent, completely dependent on others for everything, and generally suffering. It is true that we sometimes need help and have to be willing to ask for or accept it. Everyone needs help sometimes, and that is nothing to be ashamed of.

But, if the parents of a disabled child buy in to the low expectations that society sets for them, it can do a lot of harm over the long run. Our parents raised us with the belief that our world could hold as much possibility as anyone else's. We were raised with the expectation that we could have control over our lives, a family of our own and a fulfilling career. There was never any question in our minds that the "American Dream" could be accessible to us if we were willing to strive for it. Believing that your kids are capable of creating good lives for themselves may be of particular importance when your kids are disabled, but I think it's something that any parent needs to do, and something we are trying to embrace with our kids.

You're both longtime activists, no strangers to speaking to a wide audience, and you certainly appear at ease on camera. But as a couple always in the spotlight the minute you enter a public space, did you have any trepidations or concerns about exposing your life to the lens of someone outside the dwarf community (especially since the media has such an abysmal history of portraying little people)? How did Rachel go about gaining your trust?

For us, it was all about the slow process of building a solid relationship with Rachel, and also the film's producer, Jamila Ephron. Before we shot any footage at all, we had already spent many hours talking, usually over a meal. Sometimes these conversations directly and openly addressed our concerns that we didn't want to participate in anything that contributed to a sense of public spectacle around dwarfism that is often encouraged by reality TV trends. Other times, our conversations were just about life and our shared experiences and values. Spending time with Rachel when the cameras weren't rolling meant that we trusted her to make a film we could be proud of participating in after the cameras finished rolling.

Over the two years that we worked together on the film, Rachel and Jamila first became our friends and, at this point, we consider them to be a part of our chosen family. We welcomed them into our world because they welcomed us into theirs.

One of the hottest topics in the documentary community for the past couple of years has been the question of who has the "right" to tell whose story. Media-makers with disabilities seem woefully underrepresented, or at least when it comes to exposing their stories to the wider public. How are you as a community addressing this, and what needs to change?

The disability movement has a relevant slogan here: "Nothing About Us Without Us." In the case of this film, we agreed to do it because we got the sense that we would be, to the extent possible, partners with Rachel and Jamila, and not "subjects." That is, we knew early on that they were wanting to help us tell our story, not that they saw us as some alien species they were trying to document or something.

With that said, it is absolutely right that the media in general, and documentary filmmaking in particular, need to be more inclusive of disabled people, especially for high-level projects. Like in every industry, the "ADA Generation" of disabled people have arrived, and are knocking at the door. What we mean by this is that there is a group of younger disabled people that have grown up with the Americans with Disabilities Act, and had opportunities for education and career advancement that previous generations struggled for.

Moreover, we have the expectation that we will get a fair shot, and see inclusion as a basic civil right and not a charity. There are disabled filmmakers out there. Examples of projects that highlight their work include Rooted in Rights, Free Our People Film Contest, and the Easterseals Disability Film Challenge, to name a few. We are here and aren’t going away.

Oddly, as a biological female who's always identified as a gay guy—and never thought it my "duty" to cisgender society to match my outsides with my insides—I found myself identifying more strongly with Leah, with your fighting words of "I don't think I need to be fixed," than I did with the one actual queer person in the film, Andrew. Which made me wonder if the disability rights movement has aligned itself with other marginalized communities that don’t want to be "fixed." You two, for example, seem quite focused on feminist issues as well.

Certain elements of the disability movement have made an effort to be attuned to issues of intersectionality, or "diversity within diversity," as it is sometimes called. Being mindful of intersectional identity politics, at least to some degree, fosters alignment with other social justice movements. By recognizing that queer disabled people exist and experience identity-based violence, or that many people of color are also at the same time disabled, it forces the disability movement to understand public policy flaws in ways that definitely align with, say, the Pride movement or Black Lives Matter.

Being "fixed" can mean a lot of different things. It doesn't need to be about medical intervention.  Mass incarceration can be thought of as a way of "fixing" people, especially if you put it in the context of the United States' history of eugenics. Different movements for social justice may use different language, but it all comes down to people taking back power over their own lives and having the capacities and resources to shape their own futures, rather than have someone else with more power determine how they should be or who they can become. So, it's through the lens of intersectionality that we have the greatest potential to build cross-movement solidarity.

On that note, I know there is a bit of a split in the non-cisgender community when it comes to medical intervention. On the one extreme, you've got those advocating to make transitioning mainstream, and then there are those of us worried that that focus shifts the conversation away from pushing to create a non-binary world—no injections or surgery required to feel at home in one's skin. So is everyone in the little people community staunchly in agreement against the medical establishment’s efforts to "cure" dwarfism? Have you, say, met other parents in your community who've actually considered growth hormones for their kids?

Well, growth hormones aren't really an issue at this point in the history of the dwarfism community. That’s mostly because hormones don’t have any impact on most forms of dwarfism, which are skeletal dysplasias. However, limb-lengthening surgery has been a somewhat divisive issue between average-height parents of dwarfs and dwarf adults. But limb-lengthening surgery has always been very painful and time-consuming, so it was rare for any parent to choose it for their dwarf child, regardless of whether the parent was themselves average or little.

What the dwarf community is now trying to come to terms with is a technology we have started to refer to as "chemical limb-lengthening." These are some new pharmaceuticals that are being put through clinical trials that are based on genetic pharmacology rather than hormone therapy, and they have been shown to produce growth in the limbs of children with the most common form of dwarfism—which Leah has—achondroplasia. To our knowledge, there aren’t any studies about the difference in attitude toward chemical limb-lengthening between average-height parents and dwarf parents, but anecdotally, it seems to be the case that the most militant supporters are average-height parents and the most vocal opponents are dwarf adults. This is, of course, a generalization and there are lots of average-height parents that embrace the message of dwarf pride and have no interest in normalizing therapies. Since the dwarf community only thrives as a partnership between dwarf adults and average-height parents, some folks are seeing the advancement of this technology as posing something of an existential threat to our community because it may turn out to be quite divisive once it goes into full production.

Far From the Tree opens in theaters July 20 through IFC Films and Sundance Selects, and streams on demand starting July 27.