If you are unfamiliar with the work of French photographer, photojournalist and filmmaker Raymond Depardon, this newly released three-disc boxed set from Icarus Films provides a basis for understanding who he is and what subject matter occupies his field of vision. Born in Villefranche-sur-Saône in 1942, the 76-year-old Depardon shows no signs of slowing down. The restlessness and risk-taking that defined his youthful excursions to the conflict zones of Algeria, Biafra, Chad and Vietnam, leading to a Pulitzer Prize for photojournalism in 1977, is still evident when he sets off to “find himself” in the 2012 film Journal de France.

I suggest you begin your viewing here, with Journal de France. As we follow Depardon on the ground, it is the voice of his wife and partner, Claudine Nougaret, who structures the film and provides the backstory of Depardon’s life. Peter Bradshaw, in his review in The Guardian when the film was first released, called it an “absorbing self-portrait.” This is a misnomer. More accurately, it is a biography, told as much through Nougaret’s chronological narration about Depardon as it is a memoir of self-musing and regret. Although it opens with a black-and-white montage of archival footage, it quickly shifts to a color image of a contemporary scene on a street corner somewhere in France. Depardon is there, with his camera, trying to take a still image as cars or people interrupt his attempt to photograph something essential about France. As he packs up his large-format viewfinder camera, preparing to head out alone in search of the perfect light or moment, we have a feeling the search is his subject, and the resulting photographs are simply the byproduct of that search. Meanwhile, Nougaret, left at home to sort through the flotsam and jetsam of Depardon’s recorded life, frequently interjects moving images or stills starting in the late 1950s and ’60s, including his gory, no-holds-barred TV reportage of a war in Venezuela in 1963. As his story unfolds, we learn that Depardon was self-taught and, with a confidence that comes with age and earned accolades, he tells us, “I photograph only to please myself.”

His on-camera presentation as a comfortable country grandpa (Depardon was raised on a farm), while getting a haircut or driving across France with a pop song in the background, contrasts with the bold image of the photojournalist who founded GAMMA in 1966. The prestigious French photo agency ultimately went bankrupt in 2009, forced out of business in part by the dominance of Getty Images and Corbis, founded by fomer Microsoft chairman Bill Gates. Depardon had long left GAMMA to join MAGNUM in 1978, the year after he won the Pulitzer. Depardon’s images reflect the 20th century history of French Colonialism: guerilla warfare, soldiers for hire, and black African soldiers carrying a very bloated, naked, white body of a farmer/fighter. When Russians invaded Czechoslovakia in 1969, Depardon was filming in black and white in the streets of Prague amid the tanks and the tear gas and the protestors. In the mid-’70s  he lived in the desert for two years in Chad with armed nomads. In 1979, working alone, he photographed inside insane asylums in Venice, Trieste and elsewhere. Perhaps it is this work, seeing the effects of institutionalization on the mentally disabled, that set the stage for his most recent film, 12 Days, featured in this boxed set.

It is in 1986 in Journal de France when Nougaret presents herself within the context of Depardon’s life. Her story becomes part of his story. She was a 28-year-old sound engineer when they met. Their playful, loving relationship is revealed in black-and-white footage. Her support and admiration of him is evident while he remains separate, an entity unto himself. In the final minutes of Journal de France, the camera slowly pans across a beautiful old stone farm in the snow. Against this idyllic backdrop Depardon suddenly must “leave for the ends of the earth, driven by curiosity.” Followed by shots of crowds from all over the world, we are back on the road again in France. As Depardon’s camera keeps moving, the road ends in a whiteout as a Patti Smith song rings out. 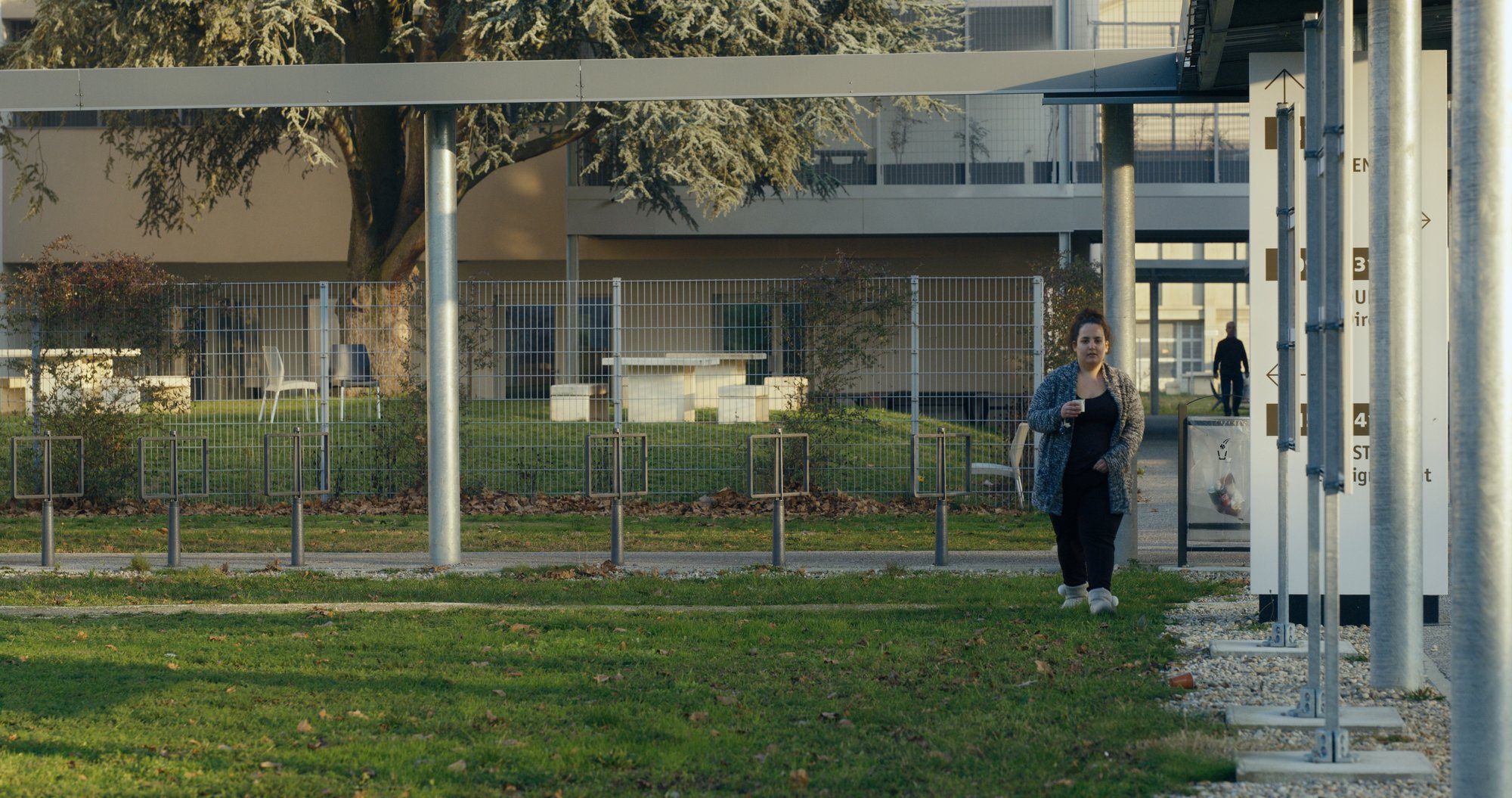 France (Les Habitants) opens with a black screen and credits rolling over audio of rushing vehicles on a highway. Depardon is on the move again. An RV is being followed from behind through flat, nondescript farmland and enters a French village. Depardon narrates, explaining he will be traveling through France from north to south recording random conversations between two people in his modest, roving recording studio. He will ask no questions. The only premise is that the couples agree to have their unscripted conversations recorded while sitting at an unadorned table, across from each other, inside the RV. A wide range of people surprisingly agree: a young couple having a baby, an elderly man and wife, two middle-aged males having an intellectual argument, two flighty young women and so on. Most conversations are brief, no longer than two or three minutes. The vehicle keeps moving from town to town.

I found the premise thin. This film is sometimes compared to Jean Rouch and Edgar Morin’s 1961 masterwork Chronicle of a Summer, but the reference is superficial. Lighthearted and a bit mindless to sustain for 90 minutes, France seemed to me to be a lazy way to make a film. In the end the realization is that it doesn’t much matter that this was filmed in France. It could have been filmed in Nebraska. The universality of our mundanely human concerns is what remains. Perhaps this was Depardon’s intent all along.

12 Days, the featured title in this collection, is by far the most powerful example of Depardon’s talent as a filmmaker. Ominous audio of clanging metal doors…a slow-moving tracking shot down anonymous, neon-lit hallways…an unidentified figure in white, presumably a nurse with lock and key…a rear view of a dark, hunched figure with a backpack…sounds of silence punctuated by hollow footsteps…darkness—these elements create a totally creepy, institutional nightmare. Every year in France, 92,000 people are placed in psychiatric care against their will. A law was passed in 2013 that requires a hearing be held on the 12th day of confinement, during which the patient has the right to contest his or her sentence in front of a judge. The judge has the final say whether the patient will be set free or sent back to the hospital for further treatment. Depardon is the first filmmaker to gain access to these hearings, and the results are profoundly heartbreaking. We see the influence of Depardon, the still photographer, in every shot. A static camera carefully frames each player in the two-, sometimes three-person interaction that determines the future of the involuntarily incarcerated.

In each scenario, a different patient appears, usually accompanied by a lawyer or advocate, sitting across a narrow table from a revolving assortment of judges. In spite of the judges’ variation in age or gender and the wide range of observable symptoms in the patients, there is an inevitability to the outcome. Every interview runs its course. A majority of the patients are articulate and strikingly self-aware. One woman complains of the stress and harassment in her workplace. Her lawyer confirms that the company she works for is known for harassing employees. The judge is stoic, yet polite and deferential, but like all the judges that went before, or those that come after, this judge commits her to further hospitalization. Risk of suicide seems to be an underlying rationale for keeping some of these patients institutionalized. One woman talks of her pain and her depression, and poignantly tells the judge, “The loneliness is unbearable.” Another man who has repeatedly been through the system tensely expresses his frustration, stating, “I am not an ignoramus!” There is little relief near the end of the film as the camera moves outside. It is gray. Smoke and fog might be metaphors for the lack of moral clarity in this situation. We feel empathy for all the players who are ultimately trapped within their institutional role. There is sadly no end. Depardon offers no solution.

END_OF_DOCUMENT_TOKEN_TO_BE_REPLACED

Nicolas Philibert's 'To Be and To Have'