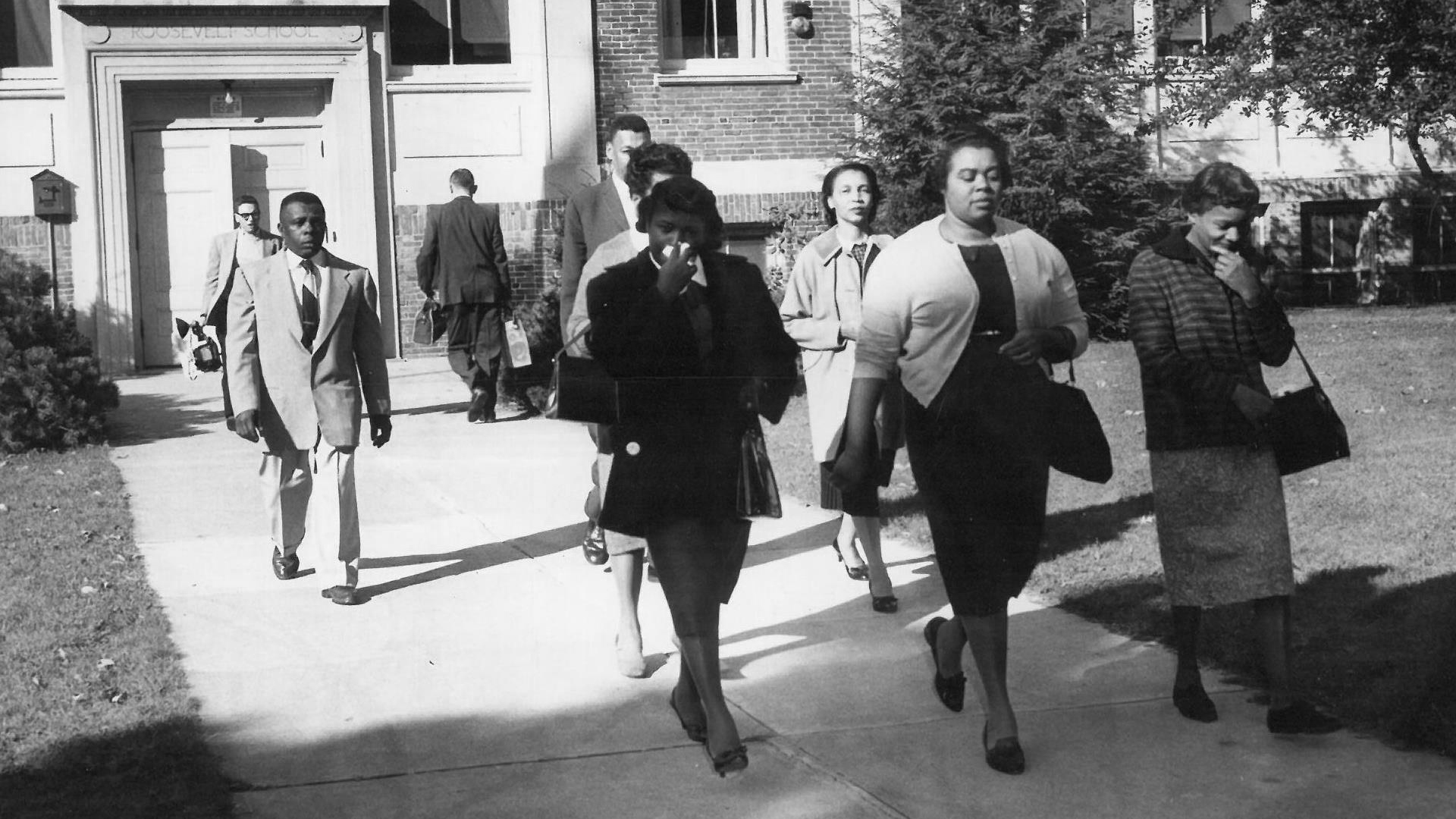 At first glance, the story of the landmark 1961 desegregation case Taylor vs. Board of Education, which originated in New Rochelle, New York, might not seem like obvious material for a white, Los Angeles-based theater director-writer-actor to tackle for her feature doc debut. But then, Arden Teresa Lewis happens to be a native of New Rochelle—once dubbed the "Little Rock of the North”—and her childhood was shaped by a diverse community whose grassroots demand for change had led all the way to the US Supreme Court.

And now with the help of film friends and family, including producer Kimberly Woods, another LA-based actress-turned-documentary producer; former New Rochelle students and parents (including Lewis’ own mom) who candidly share the ups and downs of being thrust into American history (not to mention the sharp gaze of giants like Justice Thurgood Marshall and journalist Mike Wallace); and the DocuClub LA audience that attended the virtual screening of Leveling Lincoln back in November 2021, the doc has reached another landmark stage: the US festival circuit. Which is why Documentary thought it the perfect time to check in with Lewis, fresh off final showings at the YoFi Fest in Yonkers, New York, to find out, among other things, how Leveling Lincoln has been playing from coast to coast (and in multiple locales in between).

DOCUMENTARY: Though you’ve directed several short films, you mainly come from the theater world, which made me wonder how that background might have influenced your approach to this feature debut.

ARDEN TERESA LEWIS: Honestly, I think the fact that I act, direct and write for the theater has actually strengthened my storytelling over the decades. With Leveling Lincoln, I tried to really focus on the people—seeing them as “characters in a play with three acts,” rather than simply a series of talking heads.

D: So who do you consider your key collaborators on this project—and why?

ATL: My fellow producer Kimberly Woods and my editor Andrew Jordan, whose knowledge of all things post-production has been the greatest gift, have been involved since September 2017—and have never wavered. In addition, Tinks Lovelace was quite instrumental during our first two years of production, as both producer and AD; while our DP Jack Stannard started with us as a hired shooter and then stayed on through all five years of the process. Just the fact that all these young people, from very different backgrounds, said yes to the project, when all I had initially was my treatment, my homemade trailer, and my mother's part of the story, gave me confidence in its relevance. I am forever grateful to all of them.

And of course, Rita Cofield, Ivan Copelli, and all my mentors on this film have been invaluable as well.

D: Perhaps you could discuss some of the major insights you gleaned from your DocuClub screening? How did you incorporate those takeaways into the final cut?

ATL: DocuClub was really our first feedback by film professionals—though that same week we also held a rough-cut viewing for some donors and participants at the library in New Rochelle. So we had this emotional discussion of the film and its relevance with non-film folk and stakeholders, paired with filmmaker feedback about technical matters and story structure. It was like taking an entire master’s program in documentary filmmaking, all in one week!

After that, we met with our DocuClub mentor, Victoria Chalk, to process it all. She was fantastic. She and Andrew then had more sessions in order to focus specifically on story arc, and to reorganize the dramatic action. She also really helped me to believe I had a strong personal narrative in there, and to hang on to that. Otherwise, honestly, I might have just accepted all the feedback and changed everything all at once—and in the process ruined what we had. Victoria supported us in standing by our original concepts, and changing only what we firmly agreed needed to be redone. I will keep her notes forever as a reference.

D: So what have been some of the biggest lessons from the festival screenings so far? Were any audience reactions particularly memorable for you?

ATL: Our reactions have been primarily positive, with emotions swinging wide. There’s fascination and surprise that this fairly levelheaded case took place—even while other parts of Westchester had race riots and police violence over the issue of segregation.

The festival circuit has really shown me that audiences that have nothing to do with New Rochelle or its history can still relate to the people that went through its difficult school integration. The “bussed generation” have a lot of stories—and they all start emerging in the conversations that happen after a viewing of the film.

Invariably, someone will stand at the mic with an emotional story about being taken from their home school and put on a bus to a strange neighborhood. These adults were children at the time, so the triggers are long embedded. When they speak their truth, it is so very powerful. From PTA presidents in Providence [Rhode Island], to school board members throughout the tristate area [New York, New Jersey, Connecticut], they all see it as a call to action for our current times.

D: How much longer do you anticipate being on the festival circuit—and what are your hopes in terms of distribution?

ATL: Right now we are winding down after nine months of live and virtual festivals and awards. We just won Best Documentary at the YoFi Festival in Yonkers, after tying for first place in a juried competition, which felt really good. The New York Vision Award from the Harlem International Film Festival was also such an honor for us.

In addition, we’ve been accepted into NETA’s catalogue for public television broadcast and onto the PBS app. We’re also speaking to an educational distributor that we met at YoFi in order to get access to libraries and colleges. We’ve really strategized making connections through important mid-sized festivals, like the Harlem International Film Festival, to help us get out the word that we have a film that tells a story like no other in our current school curricula—a story that is personal, and focused on the mothers and children who had to stand up and use the legal system and their First Amendment rights in order to create the change they wanted to see.

END_OF_DOCUMENT_TOKEN_TO_BE_REPLACED

The Feedback: Lisa Riordan Seville and Zara Katz's 'A Woman on the Outside'