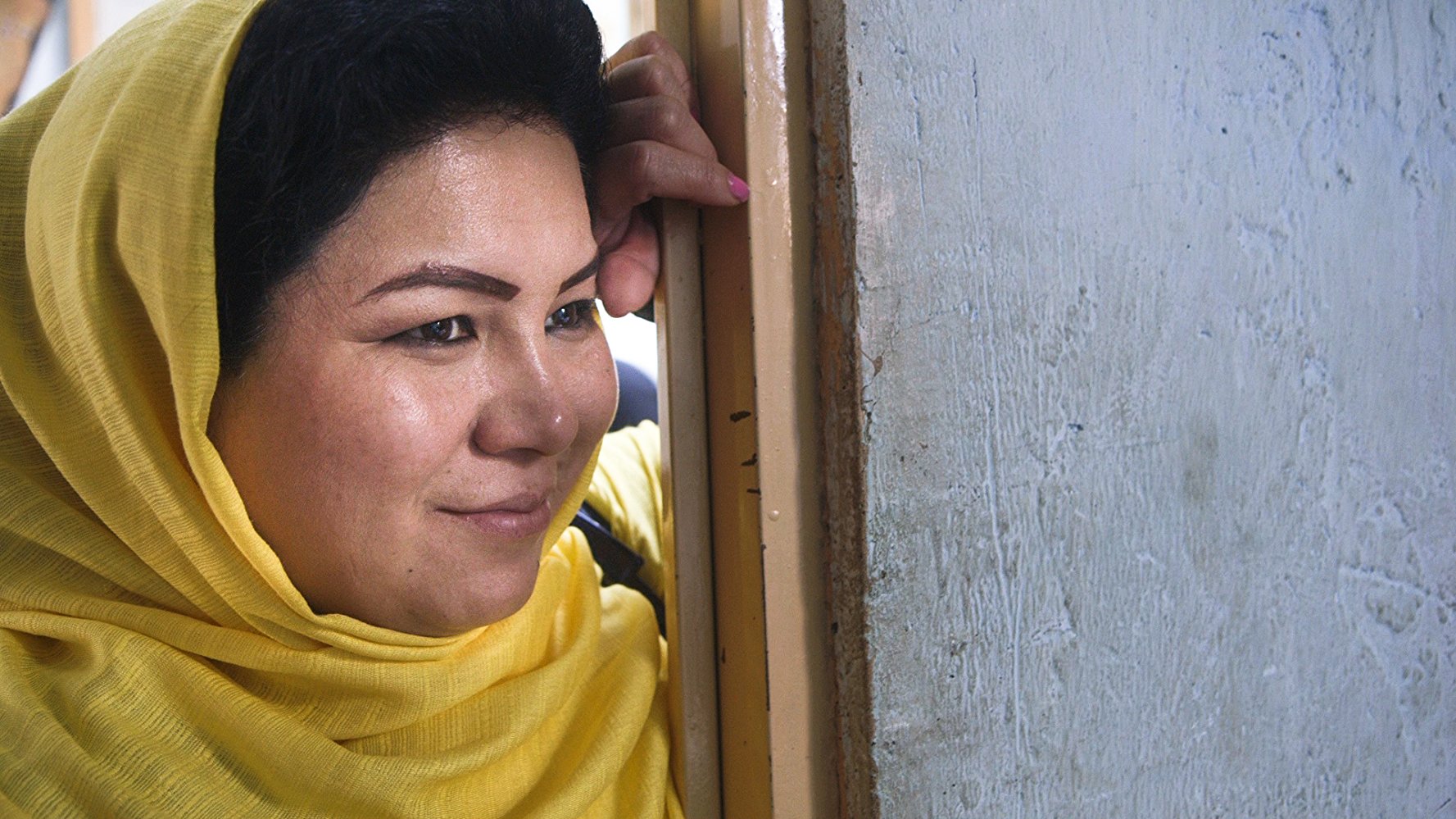 Since IDA's DocuClub was relaunched in 2016 as a forum for sharing and soliciting feedback about works-in-progress, many DocuClub alums have premiered their works on the festival circuit over the past year. In an effort to both monitor and celebrate the evolution of these films to premiere-ready status, we reached out to the filmmakers as they were either winding their way through the festival circuit, or gearing up for it.

In this edition of "The Feedback," we spotlight Elizabeth Mirzaei and Gulistan Mirzaei's Laila at the Bridge, which they presented at DocuClub LA in September 2017.

We caught up with Elizabeth Mirzaei via email in the days preceding the world premiere at CPH: DOX –and just after the awards ceremony, where Laila at the Bridge won the F:ACT Award, which "is dedicated to films in the field between documentary filmmaking and investigative journalism." This interview has been edited for length and clarity.

Synopsis (courtesy of CPH:DOX website): Afghanistan is the world's largest exporter of opium, and has one of the highest rates of heroin addiction in the world. Under a bridge in Kabul, hundreds of men and women are left to their own destiny by a corrupt government with its own economic interests in the opium trade. Laila has decided to do something about it. Day after day, the charismatic and strong-willed woman ventures out to the bridge to convince some of the addicts there to come to her private rehab centers—one for men and one for women—where the aim is to get them out of their addiction with ice-cold baths, communal prayers and motherly reprimands. It is not a miracle factory. Many experience relapses, and Laila has to struggle with constant financial problems. When the Taliban's arrival in the city scares customers away from the restaurant she is running to finance her centers, things start looking bleak. But Laila is willpower in its purest form: She threatens corrupt ministers in their marble offices, shoots mafia thugs in her bedroom and with equal measures of care and indignation has a serious word with the opium-addled men under the bridge. As she shouts at a group of men gawking at the addicts under the bridge, "I am more badass than all of you put together."

How did you happen upon the story of Laila, her restaurant and her treatment center—and her extraordinary efforts at the bridge?

We were living in Kabul when we read a newspaper article about a woman who opened a restaurant where all of the waiters were recovered heroin addicts. It's quite an extraordinary thing to do anywhere in the world and even more unusual in Afghanistan. We approached Laila with the idea of possibly making a short film about her work. Once we began to spend time with her and the men and women she was trying to help, we realized this should be a feature-length film and we ended up filming with her for over three years.

How long did you spend with Laila before you started filming?

Laila wasn't initially sure she wanted to be the focus of a film, but over a few weeks of visiting her and talking together she began to open up to us. Our first day of filming was intense. We accompanied Laila to both a funeral and a wedding. One of the men who recovered in Laila's center had gone on to join the army and was killed in the line of duty, while another man and woman who recovered in her center married one another. While neither of these scenes made it into the final film, it is a reminder of how closely tied death and life, and sorrow and joy, are in Afghanistan.

In filming the addicts at the bridge, there were scenes you filmed without Laila serving as the Baedeker through this netherworld. Talk about the process of gaining the trust of the addicts there.

We knew that in the film we wanted it to be Laila who was bringing us into the underworld beneath the bridge. Many people at the bridge came to trust us over time, but because the rate of addiction is rising, the population under the bridge was always changing and increasing. People who did not know us would occasionally grow hostile and throw rocks. They have felt exploited by people with cameras in the last, so their suspicion is understandable.

The Taliban and the drug mafia are a looming presence throughout the film; the former impacted business at Laila's restaurant, while the drug mafia attacked Laila in her own home. Were you ever in danger as filmmakers? How did you protect yourself?

Spending so much time at the bridge aroused the suspicion of an undercover intelligence agent, who would demand hefty payoffs from the dealers in exchange for allowing them to continue selling. He feared we were filming an exposé on government corruption and the drug trade, and one day he followed us in his car all over Kabul until we finally lost him. There were many other instances where the situation was risky, but this incident with the corrupt officer was the most unsettling. We decided to stay away from the bridge for a while.

Laila struggles constantly throughout the film—to keep her restaurant, to keep her treatment centers, to pay off her debts, to secure funding from the Ministry. In the end she has opened a new restaurant, staffed by professionals, rather than by addicts. Has the renown she has gained through her work with addicts helped to secure more funding and support? How is her center doing now?

Laila's center is still open and treating people, but it continues to be a struggle. She has yet to receive any financial support from any foreign or domestic organizations. A few people who met Laila and saw a scene from our film sent her very generous donations, so that's been one benefit of the film thus far. Laila dreams of opening a modern hospital that will not only treat both men and women, but provide them with careers and income.

Two of your protagonists died during production. How did these passings impact how you shaped the film in the editing process?

When Ikhtiar Gul died, it was so unexpected. He was a friend and we were heartbroken over his loss. Dealing with it in the film was one of the biggest challenges we faced because, although we spent a good deal with him, I didn't always have my camera so we didn't have much material to work with. We still don't know exactly how he died. We heard conflicting reports that he had died under the bridge of an overdose, and also that he had died at home of a natural heart attack. We want to believe that he died clean, as was his wish. We were careful about how we treated this in the film to be respectful of him and not make any assumptions.

When Sayed Jamil died of an overdose, we were not surprised, but we were still shattered. We were very close to him and tried to provide whatever support we could to help him get and stay clean over several years. In the film, we chose to leave his final scene open-ended. I wish that he was alive to see this film.

With regard to your screening at DocuClub, what were your expectations going into that screening?

I was nervous about presenting a work-in-progress; I knew the film was not where I wanted it to be yet. I felt vulnerable, nervous and unsure about what kind of feedback to expect.

We previously had a small, private screening in Montreal.

We wanted to find a way to balance Laila's fierceness with her vulnerability, and I also wanted the film to be honest to the magnitude of the problem but remain hopeful in some way.

The screening was so helpful, both in giving us new insight but also in confirming some of the feelings I had already about what wasn't working. When you've been working on a film for so many years, you can feel unsure of your ability to really "see" it anymore, and so hearing that these issues were present for others too was very helpful.

I think it was helpful to hear from people who had never seen any previous cuts that Laila's complexity still wasn't coming through. People wanted to see more of her flaws. It was a fine line because friends who watched previous rough cuts wanted her to be more likeable, so we had to find a way to strike that balance.

We brought in a number of new scenes and moments that were not in the rough cut. I basically created a long list of all the feedback suggestions and then thought of scenes that could address the issues and gaps.

What were the key factors that determined that your film was ready for your CPH:DOX premiere?

When the edit finally really came together. It's hard to pinpoint an exact moment in time, but we reached a point where we knew the story was strong. The DocuClub screening was a vital part of that process; it really helped us to define and strengthen the story.

When you screened your film at CPH:DOX, what were some of the reactions, questions and observations that you found most surprising and unexpected?

We had great audiences at our screenings who were very engaged and also wanted to know how they could support Laila's organization to continue the work she's doing. Overall, it was really wonderful to see people so interested in Laila and what's happening in Afghanistan. The war has been going on for so long that I think many people have Afghanistan fatigue, and it meant so much to us to see that people still cared and had not forgotten the country.

END_OF_DOCUMENT_TOKEN_TO_BE_REPLACED

Jon AIpert Returns to "A Life of Crime"