Liability Claims in the COVID Era; Legal Protections for Journalists; Precautions against Defamation 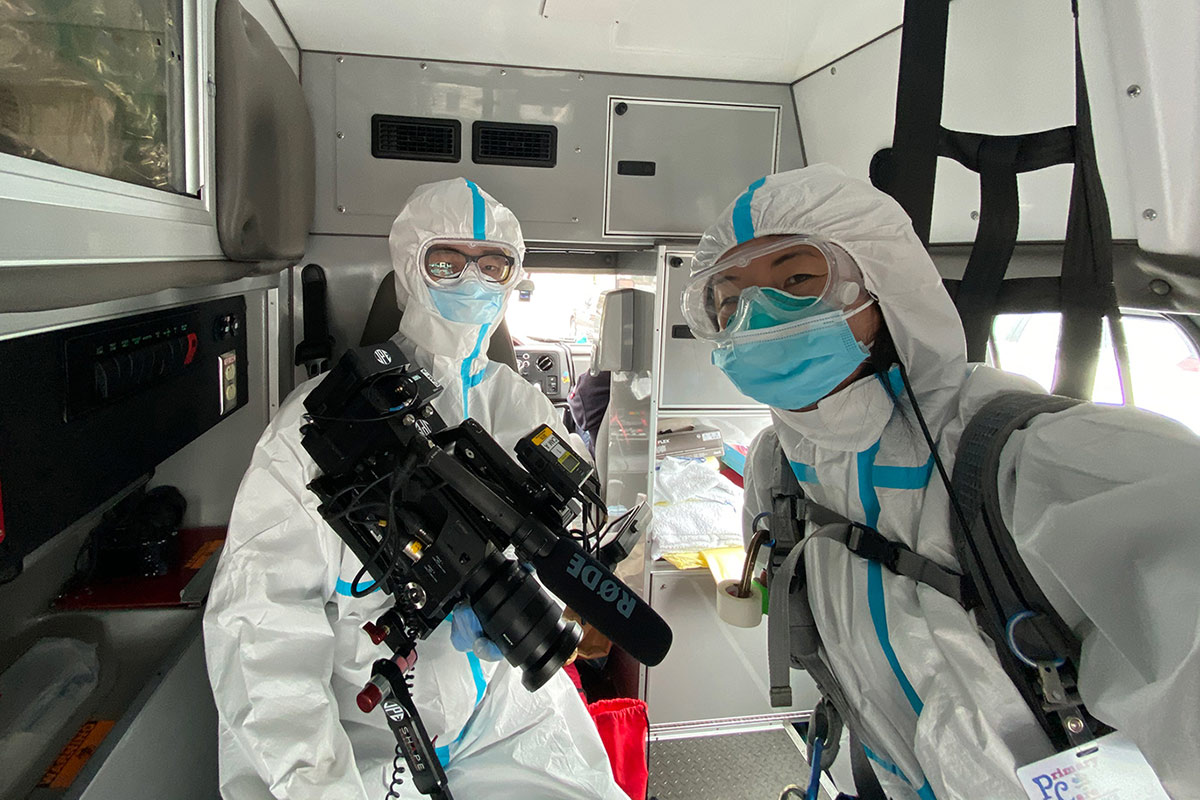 If filmmaking during the COVID-era is inherently risky, can filmmakers require crew or subjects to assume their own risk and waive legal claims against the producer?

As filmmakers plan to commence production with new COVID-era safety precautions, many wonder if they also should seek contractual protections to limit their legal liability in case of an outbreak on their productions.

Liability waivers are not unusual. Recreational centers such as gyms, pools, amusement parks and ski resorts typically require them, given the heightened risk of physical injury in those activities.

In its simplest form, a liability waiver abandons legal claims against the person responsible for an activity, even if that person is negligent. Before taking part, a participant must sign an agreement in which they assume their own risk and waive any right to bring a claim if injured. Given the highly contagious nature of COVID -19 and the risk of physical injury, can producers update their template production agreements to include liability waivers related to the disease?

The answer is that a producer is unlikely to reap any benefit from including a liability waiver in its production crew deal memos. Although liability waivers generally are enforceable if drafted properly (e.g., with clear, unambiguous language) and there is an opportunity for negotiation, they are rarely enforceable in the employment context. This is because employers and employees generally have unequal bargaining power (i.e., an employee is less likely to negotiate with vigor if their job depends on it). Further, by asking its crew to assume the risk, a producer might alienate the very crew it will be relying on to get the film made. And although waivers can be enforceable against independent contractors, classification of film crew as independent contractors rather than employees is unlikely to pass legal muster under IRS and most state regulations. It is considered an attempt to evade certain taxes and employment laws.

Instead, a producer should ensure that its production crew is covered by worker’s compensation insurance, which pays compensation for an injury in lieu of a claim against the employer. The law as it relates to COVID-19 and worker’s compensation evolves daily and producers should consult with legal, insurance and production payroll advisors to ensure they are in compliance and obtain adequate coverage. As a defense against claims of negligence, a producer might consider other ways of documenting its adherence to standards of care, such as by having the crew sign an acknowledgment of the production’s COVID-related health and safety procedures.

A waiver might make more sense in appearance releases signed by individuals who are not employees and sit for interviews or otherwise appear on camera. To accomplish this, a producer could expand the scope of its form release. An appearance release generally includes a waiver of all legal claims against the producer from production and exploitation of the film, specifically including claims of defamation, invasion of privacy, and infringement. A producer might add to this list a waiver of claims involving “physical injury, personal injury or death,” with express reference to COVID-19.

But although waivers have been held enforceable in some contexts, there is no precedent (as of this writing) to provide any guidance as to whether they would be enforceable with respect to pandemic-related injuries. And needless to say, a waiver is not a replacement for COVID-safety protocols. Failure to maintain them could nullify a release if a court determines a producer was grossly negligent. (Claims for gross negligence cannot be waived.)

Finally, be aware that liability waivers are completely unenforceable in Virginia, Montana and Louisiana. Otherwise, the enforceability of a waiver requires a state-by-state analysis.

Given the alarming number of assaults on journalists covering political events and protests, how might legal protection for documentary filmmakers be strengthened?

In these politically divisive times, the pursuit of facts through newsgathering, including investigative documentary journalism, has never been more critical. Regrettably, the health and safety of filmmakers and other journalists pursuing politically sensitive projects has rarely been so hazardous.

Increasingly over the past few years, politicians and agenda-driven media networks have instigated hostility against the free press by labeling independent and mainstream media the “enemy of the people” and a “stain on America” for their purported dissemination of “fake news.” Journalists covering political rallies have been demonized, threatened and assaulted. Since May 26, when protestors first reacted to the death of George Floyd, many journalists have been injured without provocation by police officers and political extremists. Of great concern is that these assaults and threats will have a chilling effect on newsgathering. And when the health and safety of documentary filmmakers and other journalists come under attack, the role of the free press—a cornerstone of American democracy—is at risk.

While many states have laws protecting journalists, offenders are not always prosecuted—sometimes due to political considerations. One remedy receiving attention is federal legislation. The Journalist Protection Act (H.R. 1684), sponsored by Senators Richard Blumenthal and Bob Menendez and Congressman Eric Swalwell, would make it a federal crime to intentionally commit, or attempt to commit, an act that causes bodily injury to a journalist if done with the intention of intimidating or impeding newsgathering or while the journalist is taking part in newsgathering.

Introduced into the House of Representatives last year, the bill as of this writing is before the House Judiciary Subcommittee on Crime, Terrorism and Homeland Security. If the law is enacted, a convicted offender would be subject to substantial fines and sentenced to three to six years in prison.

The recent and alarming spike of assaults on journalists threatens the values enshrined in the First Amendment. With the purpose of preserving this critical privilege and the safety of our journalists including documentary filmmakers, the JPA stands to receive greater focus in the final months of the 116th Congress.

When working on a fast-breaking story, what considerations are especially important to avoid liability for defamation?

The First Amendment protects nonfiction film producers—just like other journalists—from liability for a false defamatory statement that was thought to be true when it was made public, as long as enough care is applied to the gathering and reporting of facts. Although the subject suffers reputational damage undeservedly if the statement turns out to be false, the law shields filmmakers who do their homework from legal responsibility.

And fast-breaking stories may get a little more latitude for mistakes compared to an archival story assembled over months, but there are still basic requirements related to corroboration that apply to all stories.

The first step in taking advantage of the First Amendment privilege is to identify defamatory statements in a film. Defamation has two elements: a statement of fact and damage to reputation. Sometimes actual damage to reputation needs to be demonstrated in a lawsuit by the subject of the statement. Other times, when the type of statement is categorically damaging, injury to reputation is assumed. Those statements include, for example, such everyday subject matter as a subject’s dishonesty, criminal activity, criminal associations, financial insolvency, incompetence in a business or profession, and infection by a serious communicable disease.  (Take COVID-19, for example.) Whether the statement is in narration, or a borrowed clip, or an interview, the law considers the statement to be adopted by the filmmaker; you can’t avoid liability by quoting someone else. Also, the law generally considers implied facts to be as legally problematic as directly stated facts; for example, you can’t defeat a claim by introducing a defamatory statement with a question as in: “Is it a coincidence that the landlord tripled his fire insurance coverage a week before his warehouse burned to the ground?” The implication conveyed is that there’s no coincidence.

The second step (recommended) is to remove any potentially defamatory statement that isn’t essential. If injuring reputation isn’t journalistically necessary, then avoid it.

For potentially defamatory statements that are necessary, the third and most important step is to obtain legally sufficient corroboration to be eligible for the First Amendment privilege in case the statement you thought was true turns out to be false. Simply believing a statement to be true is necessary but not sufficient for a First Amendment defense. There has to be a good basis for that belief.

How much corroboration is enough? That answer depends on a balance of common-sense factors like these:

If a story is fast-breaking, that’s one factor in the mix but not the only factor when a court decides whether a filmmaker can be held liable for unknowingly making public a false and defamatory statement. Although more verification is expected from a filmmaker who has no immediate time pressure, publicizing defamatory statements with insufficient verification, balanced against the other factors, can still lead to liability.

What about the distinction between statements concerning private individuals on one hand and public officials and public figures on the other hand? You may know that in order to overcome the First Amendment defense, “actual malice” (knowing falsity or reckless disregard for the truth) has to be demonstrated by a public official or public figure in order to pursue a defamation lawsuit against a journalist and private individuals only need show “negligence” in most states (that is, a tilting of the balance of common-sense factors referred to above in the plaintiff’s favor). Precedent shows, however, that this distinction can be unpredictable when applied to any but the highest echelons of public persons and using the private person balancing test in a pre-publication review is the more prudent choice for private and public subjects alike.